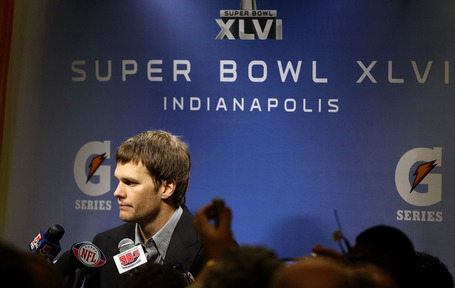 Normally I reserve "Enemy Reaction" for Seahawks opponents, but the Seahawks weren’t in the Super Bowl. There’s no enemy to be had here, really, even though I really am not a fan of the New England Patriots. Yesterday’s game was well-played, close throughout, and featured one of the most bizarre finishes ever capped off with a dramatic Hail Mary on the final play that just came up short. The 9-7 New York Giants are Super Bowl champions, while the 13-3 New England Patriots once again fall short to this Giants team for a 3rd consecutive game and for a 2nd Super Bowl. The live in-game reactions from Patriots and Giants fans have been documented for the key plays for the Giants in the Super Bowl, from the Tom Brady safety all the way to the final play. Following that is post-game thoughts from a few Pats bloggers.

Live-thread reactions are courtesy of Pats Pulpit and Big Blue View. (View after the jump) 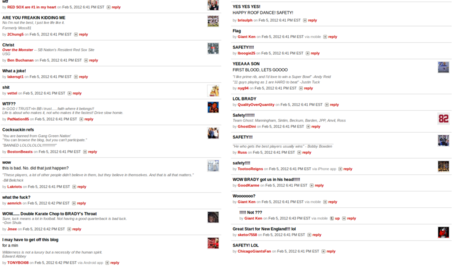 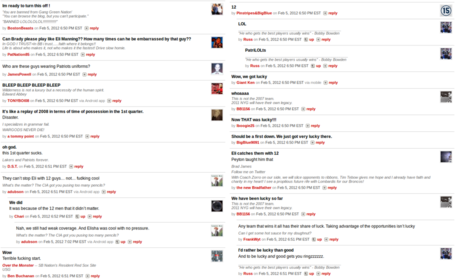 Eli Manning to Victor Cruz to Make it 9-0 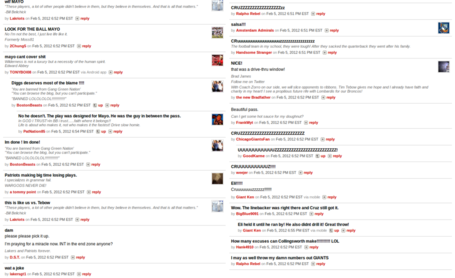 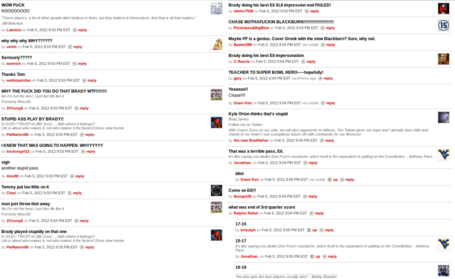 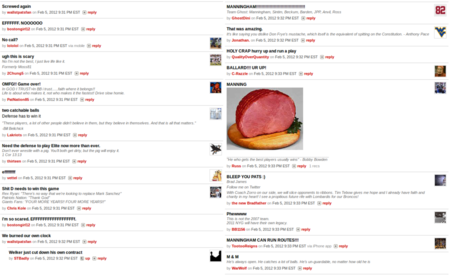 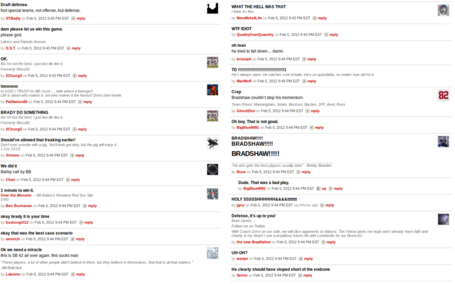 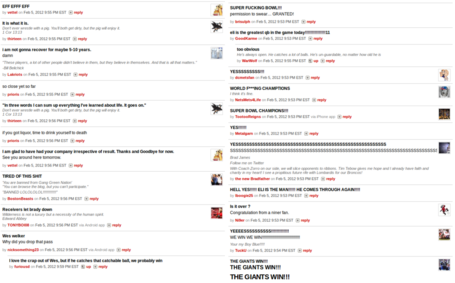 Some writers are placing full blame on Tom Brady. Eric Wilbur from the Boston Globe wrote, "Sorry, Tommy Boy, this one’s on you. Your hideous performance led to the Giants’ 21-17 Super Bowl title win. How embarrassing for your coach, your teammates, and your fans." WEEI’s Kirk Minihane took a similar but less whiny-sports-fan-esque tone in his piece last night after the game (you can read that HERE). Some fan rantings I’ve heard have blamed Brady, Welker, Deion Branch and Aaron Hernandez for their equally-critical drops, and of course the defense.

Unfortunately for those fans who need to place blame a someone, there are no goats in this game. Just as the AFC Championship was a team win, Super Bowl XLVI was a team loss. Brady could have been a little sharper, receivers should have held onto passes, the line should have blocked better in critical situations, the defense should have made that critical stop, and the coaches could have coached a little better. No matter how you slice it, there’s a simple fact that’s brutal but true:

The New England Patriots lost Super Bowl XLVI to the New York Giants. They all did, and pointing the finger won’t make anybody feel better. – Jamie of Musket Fire says the Pats, pundits, and fans alike should stop assigning blame to individuals for this loss.

Post-Game: This One Hurts

Losing to Eli Manning and the Giants for the second time is just devastating.

There’s a lot of blame to go around. Eli Manning outperforming Tom Brady, a killer 12 men on the field penalty, a Rob Ninkovich offside penalty, the nonexistence of Rob Gronkowski, and a crucial drop by Wes Welker are all going to be discussed endlessly in the media.

Eli besting Brady will be the main story though. The Pats had the lead 17-15 in the fourth quarter, and Brady was never able to put the Giants away. Brady threw a costly fourth quarter interception while Eli led his team to a fourth quarter come back victory. That’s all there is to know.

Mario Manningham played the role of David Tyree on the final Giants drive when Manning hooked up with Manningham on a huge 38 yard pass. Ahmad Bradshaw would eventually score a touchdown with 57 seconds left to put the Giants ahead 21-17.

Tom Brady wasn’t able to work his magic in 57 seconds, and the time expired after a desperate hail mary attempt.

Bill Belichick and Tom Brady could have gone down as the undisputed best Head Coach-QB duo in the history of the NFL, but their legacy will be somewhat tainted after losing to Tom Coughlin and Eli Manning twice. – Trevor from Foxboro Blog laments on New England’s 2nd straight Super Bowl loss.

And so concludes the 2011-12 NFL season. The first regular season game ended with New Orleans Saints RB Mark Ingram coming up one yard short of a potential tying touchdown against the Green Bay Packers in a 42-34 shootout, and it ended with Ahmad Bradshaw stopping his momentum one yard too late and accidentally scoring the Super Bowl winning touchdown for the 9-7 New York Giants.

I really can’t figure out how the Giants are anything other than the worst team to ever win a Super Bowl, but you have to give them so much credit for finding a way to get hot at the right time of the year. Under Tom Coughlin and Eli Manning, their only playoff wins have all come in Super Bowl seasons. Coughlin absolutely has to go to the Hall-of-Fame just on the two Super Bowls alone, never mind making Jacksonville an instant and consistent playoff contender in just his 2nd season with the expansion franchise. Eli isn’t going to Canton, yet… but he seems to be reaching his prime and playing at a tremendous level and his Super Bowl MVP is deserved. Just don’t say he’s better than Peyton Manning, because if you do you know nothing about football.

New England plays the NFC West next year meaning they come to Seattle again. Hopefully Bill Belichick and Patriots management doesn’t realize that they need deep threats and not several slot receivers, doesn’t improve their woeful secondary, doesn’t get a 1,000 yard rusher (which is the last time they won a Super Bowl), and may the 12th Man be rocking for that game whenever it’s played. For the Pats to reach the Super Bowl with a defense that bad, it’s a pretty impressive achievement. In the end the lucky breaks went against them, and critical mistakes, including the penalty that negated a fumble recovery as well as the dropped passes and early safety, felled them in the end.

It’s been fun doing this series and I hope to continue it next year.