Greg Cosell refers to the 'move' tight end as the 'joker' so I'll just go with that jargon - with the most obvious example in the NFL being Aaron Hernandez. Part wide receiver, part tight end, part fullback at times, this type of player is becoming more and more popular in this league as teams look to create mismatches and out-scheme opponents.

With the visits from Derek Carrier, Adrien Robinson, David Paulson on the books and impending visits by Lamont Bryant and Brad Smelley to VMAC, it seems apparent the Seahawks are looking at that position - each one of those guys are the H-back type with athleticism, speed, pass catching ability, and some blocking chops. Versatility.

Instead of just spouting off more about how the Patriots dominated with Gronk and Hernandez, I thought maybe I'd take a look at the Seahawks practical application of a 'move' or 'joker' tight end. The Hawks best version of an Aaron Hernandez is probably Cameron Morrah, at 6'3, 250, who is more known for his athleticism and speed than his in-line blocking skills.

In Chad Davis' and my snap-count and formation tracking from last season, one pattern that emerged was the way that Cameron Morrah was used. Towards the end of the year, Morrah began replacing Anthony McCoy as the #2 tight end and, though I don't have the exact numbers, I'd say in large amount of his snaps, the Seahawks aligned in the '22' formation - two tight ends, two running backs - and motioned the former Cal TE to the wing prior to the snap.

There are two principle reasons for this. 1) Motion in an attempt to create mismatches, and 2) motion in attempt to glean the type of defense the opponent is in.

Here's an example from Week 15's matchup with the Bears. Early in the game - 1st quarter. Seahawks in their trusty '22' formation with Zach Miller, Golden Tate to the left, Cameron Morrah to the right, and Michael Robinson, and Marshawn Lynch in the backfield.

I've put arrows over the Bears' two openside defenders, CB Charles Tillman, up on the line, and S Chris Conte, at safety to that side. 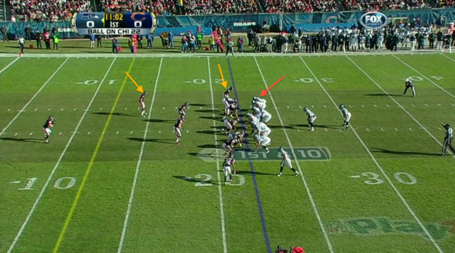 Prior to the snap, Morrah motions out to the wing, and is shadowed by CB Tillman. This is what the Seahawks want - a mismatch. Though Tillman is a big corner at 6'2, he's still quite small compared to the 250 pound tight end and gives an inch to Morrah. The other thing it tells you is that the defense is likely in a zone, as the safety, Conte, stays put. It's tough to know exactly what you're dealing with against any formation because of the complexity of NFL defenses, but using motion can better isolate assignments than using no motion at all. 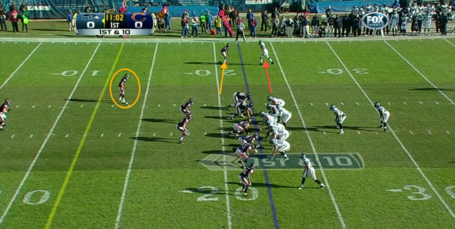 Below, you can see the snap. Tarvaris has a simple job on this one. As Morrah runs his slant route to the middle, Jackson must read the openside linebacker and safety here - since neither of them jump into the short zone off the hashes, it's an easy, uncontested throw. All Morrah has to do is beat the jam and cut to the inside.

See below- on the snap, the read is obvious. Conte retreats to the deep half of the field and Lance Briggs stays in to play the run. This isolates Morrah, a tight end, against Tillman, a corner. 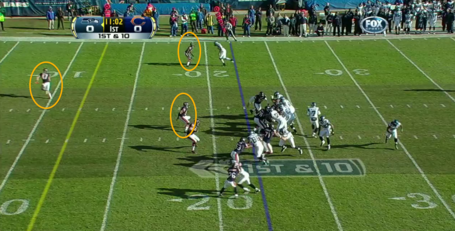 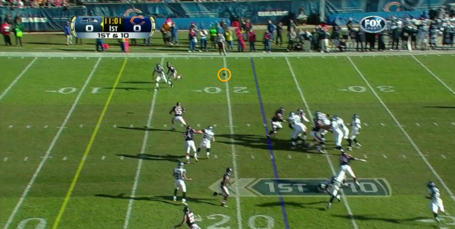 Morrah makes the catch and ends up on the one-yard line. Marshawn Lynch runs it in on the next play. 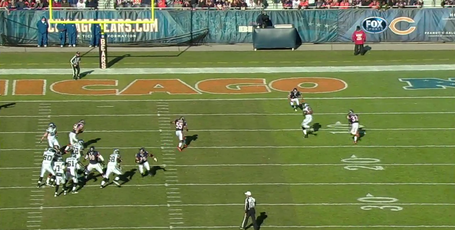 Just one example of how the Hawks used a 'joker' last year, and look for it to be featured even more heavily again next year, especially if the Hawks go out and get a guy like Coby Fleener or Ladarius Green. I get the sense that the Hawks aren't necessarily sold on Morrah in the long term - hence all these visits by H-backs this season (and last season too) and will be looking to upgrade. It should be noted too that Anthony McCoy isn't really this type of player- he's more of an in-line blocking tight end that can also catch (sorta). I'm not sure what all this means for his prospects, but it will be interesting to see.