On Building A Long-Standing, Winning Franchise In the NFL

Share All sharing options for: On Building A Long-Standing, Winning Franchise In the NFL

Greetings Seahawk fans! Nothing groundbreaking here, but I wanted to share a way to organize my thoughts on what I think it takes to build a long-standing, winning franchise in the National Football League. It is basically my own version of a "Win Forever" pyramid. Of course, Pete Carroll already has a "Win Forever" pyramid, but maybe mine could be labeled the "Sustained Success Pyramid"... hmmm, that doesn't have any ring to it. Oh well. Another lame thing: the "Sustained Success Pyramid" doesn't even look like a pyramid - it looks like a box! For this exercise, Imagine you are in a helicopter looking down from the sky onto a four sided pyramid. And here we go. 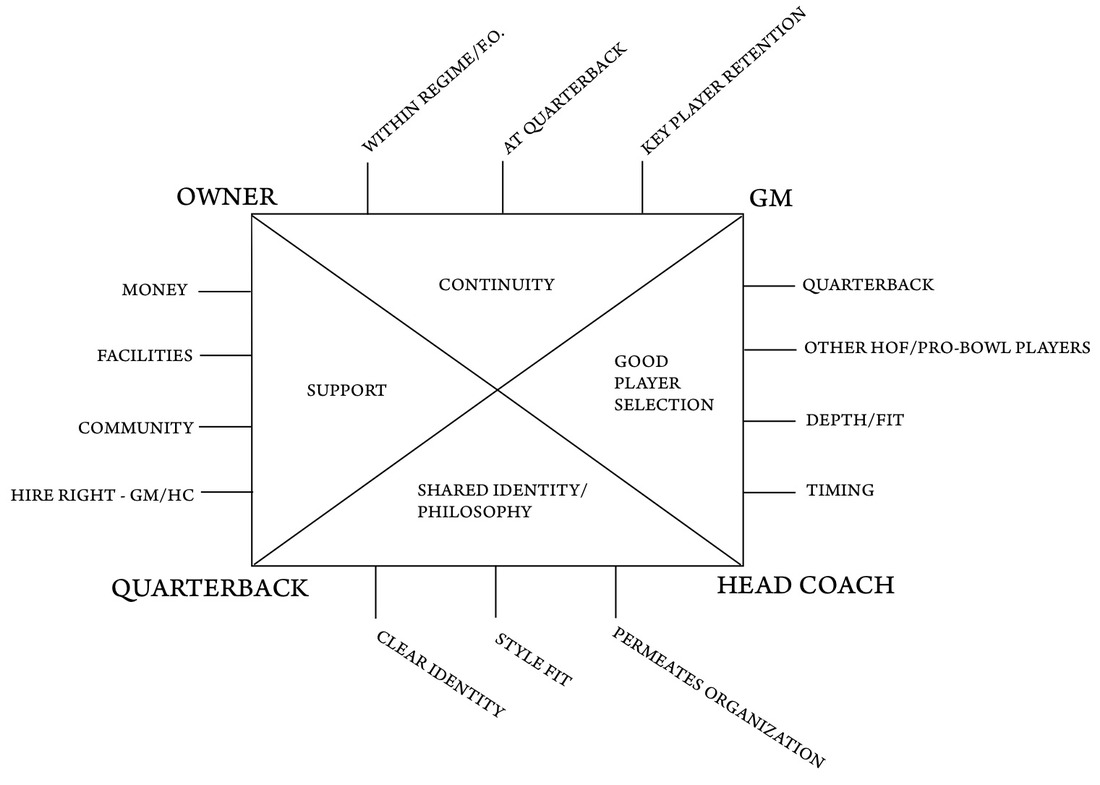 I think the four most important people in a football organization are the Owner, the GM, the Head Coach, and the Quarterback. Once in a while, the "QB" may be a star player in a different position. Perhaps this non-QB leader is, in rare cases, a "HOF, transcendant Ray Lewis" type. I would say that nine out of ten times, the key player is that franchise quarterback. In simple terms, those are the four corners of a winning organization - those four individuals. Of course, there are dozens of other very important front office decision makers, assistant coaches, business people, facilities and equipment managers, doctors and other key football players, but those are the big four cornerstones, in my view.

I think the Seahawks have three of those four corners covered, with the final corner being the unsolved part of the puzzle (the quarterback). Hopefully this corner will be solved by 2013 or sooner. Perhaps this person is on the current roster, but I am leaning toward the idea that he is not, yet.

THE FOUR SIDES- ONE AT A TIME

The four sides of the pyramid are (1) SUPPORT (2) CONTINUITY (3) GOOD PLAYER SELECTION, and (4) SHARED IDENTITY/PHILOSOPHY.

The support side of the pyramid is really squarely on the shoulders of the owner. The owner provides two key things - support and continuity, the 2ndside of the pyramid, to the organization. Owner Support is pretty self-explanatory and needed in at least these four areas:

(2) FACILITIES - A competitive edge over other NFL clubs involves possessing excellent facilities and an excellent stadium. The Seahawks have that at the VMAC and at CenturyLink Field - both cutting edge.

(3) COMMUNITY - The Owner should set the tone and give back to the community, which I believe Paul Allen does in many different platforms and avenues.

(4) HIRE RIGHT - The great Owner has to hire the right GM and the right Head Coach- and of course arm them with whatever they reasonably need, and more, to succeed.

Firing coaches every two years will get a franchise limited success. The same goes for firing GMs. Sometimes you should fire a coach or GM - but the obvious key is to get the right guy in there and give him support and enough time. If you have the wrong guy, which Paul Allen obviously thought he did after one year of Jim L. Mora, I think it's better to move on immediately and admit your mistake. In general though, the more continuity (paired with winning) the better. Continuity is key in three areas:

(1) Regime - which is essentially the GM and the Head Coach. You want your Draft to fit your scheme and not change that scheme drastically every couple of years.

(2) At Quarterback - very rarely does a Head Coach take multiple quarterbacks to the Super Bowl. Joe Gibbs did it, but it is very rare. Most successful "Eras" are based around a team boasting the same Head Coach paired with the same Quarterback (think Brady/Belichick, Brees/Payton, E. Manning/Coughlin).

(3) Key Player Retention - rewarding good players you draft with their second contract and creating an environment of winning and support. The goal is to create a culture where players WANT to stay because of the team, and of course, because of money.

Some teams have defensive focus, while others are more offensively focused. Some teams grind out close wins and play close to the vest, while other teams are much more aggressive on offense and adjust their defense with that style in mind. There may or may not be any one right way.

Nonetheless, the Coach and GM need to share a strong philosophy/identity that is authentic to who they are as leaders. This philosophy must be communicated to the team and the entire organization in a clear and consistent fashion. Pete Carroll has done this. Some fans may not like Pete's philosophy on different aspects of game management and player selection, but most fants agree that he does possess a clear philosophy that he communicates over and over (and over) in various settings.

John Schneider is also looking for specific traits in players and fitting those players into Pete's scheme and philosophy. So far, they have blended together well. I give Pete and John a B grade so far. Some would give them an A, and I won't quibble with that assessment.

I think Schneider is pretty fluid - the last Head Coach he backed for hiring was Mike McCarthy in Green Bay. Schneider had a heavy influence on McCarthy's hiring for GM Ted Thompson. McCarthy is a totally different coach in personality and focus than Pete Carroll. McCarthy wears his ties cut too short, is a Midwest guy, isn't a "rockstar", and is focused on offense.

Carroll is a west coast coach, has a big twitter following, is defensive focused, and is considered charismatic and fun. You get the point. Both men are good coaches, yet are totally different from each other. Many people prefer the McCarthy style and that is not wrong nor right.

Back to Identity and Philosophy: this shared philosophy has to permeate the organization. Carroll got rid of Jeremy Bates and in some ways replaced him with Tom Cable. I know they don't have the same role, but you get the picture. Ken Norton Jr. expresses Pete's philosophy to Ken's position group, the linebackers.

The identity has to be clear and themes have to be clear (turnovers, ball security, defense, special teams focus, game manager QB, always compete). The style of player has to fit the scheme and personality of the team. Each individual player contributes his personality and character and playing style to the collective identity.

The Seahawks want a team that is competitive, young, big, and long. Players have to fit this style.

You see that in the personality of a Doug Baldwin or a Richard Sherman and many other players that Pete and John have acquired.

The last side of the pyramid is that, put simply, you have to draft well. You have to select good players, preferably in the draft. Free agency provides good value in some cases, but typically you pay market rates or higher (if that is even possible) for good players. Sometimes you do find great value in free agency, but better value is typically found in the draft if you draft well.

The most important draft pick is your quarterback, and this pick is possibly the most difficult to line up for a team that is a "QB have not". The Seahawks have yet to solve this riddle.

Next on the player selection list, after QB, is grabbing other Pro-Bowl caliber players. I think it is more ideal to build around a QB, but if that player is not there, perhaps going the other way (build the team, and then drop in the QB when he appears) can work. We will see.

As Seahawks fans, we are hoping this approach does work. It is a hard road for fans when the national media emphasizes the QB (with good reason). The Seahawks have done a good job of this non-QB-talent acquisition so far under Carroll and Schneider and this is evidenced with players like Earl Thomas and many others I will not name. If you are reading this, you know who they are. I think most Seahawks fans believe in this PCJS regime's ability to land other Pro Bowl quality players via Draft or Free Agency (non-QB).

The last two aspects are often ignored - depth and timing. Football is a violent sport with injuries in every game. You lose a player to a season ending injury perhaps once every two games. The Seahawks lost about one player per game to a season ending injury in 2011. You have to build depth 1 to 53, and beyond the initial 53 in your shadow roster/practice squad. Late round draft picks, value Free Agency, waivers, and undrafted rookies are a huge part of Carroll and Schneider's focus, and this is critical to building depth and is a never-ending process.

Lastly - timing. There is so much to this idea of timing that this could be an article in and of itself, but I will attempt to restrain myself.

Timing involves staggering your contracts so that key players come due for free agency at different times. Timing involves what time of the year you sign extensions.

Timing is huge! Timing is taken into consideration when you fill certain holes on your roster and can determine what position groups to strengthen first, and which to attack next year.

You get the picture - timing is EVERYTHING. Timing also involves making your owner and fan base happy with the progress you have made.

There really is no conclusion because like I said above, it's a fluid process and timing is key. These ideas are theoretical but based on my study of some of the 'dynastic' franchises in the NFL over the last few decades. With all the sides of the pyramid intact, do I guarantee a championship? Nope.

Some teams have all the cornerstones in place but at the end of the day it's very, very hard to win it all in this league and even a franchise like the New England Patriots - with a quality owner, GM/Coach, a HOF QB in place, plus many of the factors I laid out above down pat, - haven't won it all since 2004.