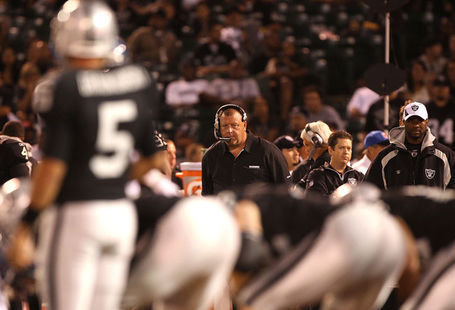 Riddle me this, Field Gulls: What's 6'7, weighs 325 pounds, and has a face only a mother could love? 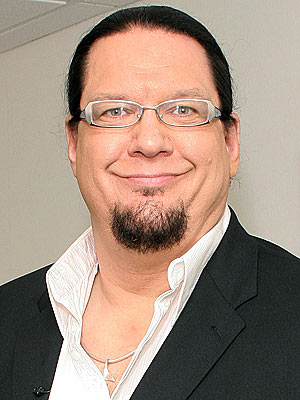 No, no, but you're close though. Why don't you try again? 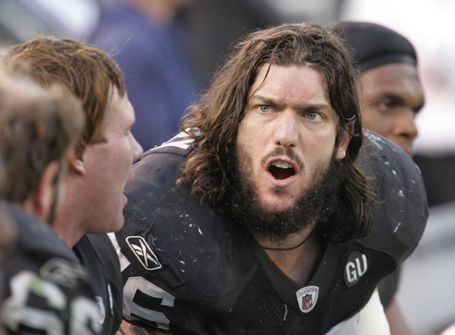 That's right! Seahawks Patriots Guard Robert Gallery! Remember this guy? We picked him up in FA last year after we hired Tom Cable as the OL Coach. The Seahawks saw him as a stop-gap and a veteran presence for a young and upcoming line, but Gallery disappointed severely despite playing 11 games. Eventually, the emergence of Paul McQuistan and James Carpenter allowed him to be released, and the rest, as they say, is history.

But if memory serves me correct, one of the more interesting headlines that Gallery brought with him to Seattle was not only his playing ability, but Tom Cable's view of how he wants his players - big, strong and most of all, mean. Since his hire with the Raiders in 07, Cable has stabilized Gallery's career, along with countless others with a physique like his. Don't take my word for it: Look at the statistics I compiled over the few years where Cable had control over the O-Line roster:

*Players he brought in highlighted in bold

But I know what you're thinking right now. You're saying, Einstein, you're being very subjective here right now - what exactly are you trying to show us here. And you would be right - after all, a lot of things are categorized as "Big, Strong and Mean", and isn't that exactly what a NFL caliber lineman should be anyway?

To understand Cable's identity within the offensive line, I must begin by showing you what he is not.

1. Cable runs a true Zone Blocking Scheme - with an important distinction. He's not your Alex Gibbs guru - in fact, I classify Cable's system as an upgrade from the traditional Gibbs system. A typical ZBS scheme involves quickness, footwork and athleticism over size and strength, relying on constant double, maybe even triple teams on D-Lineman to create movement on the line of scrimmage. ZBS is also very simple, and instead of man blocking, players only block a "zone" of the play. It's effectiveness is almost well utilized; most of the NFL offenses, including the Packers, Broncos, and Texans involves a general ZBS despite the differences between their philosophy, game planning, etc.

With Cable though, he utilizes the same thing with one unique trait: putting in big players, and already you can see the problems arise - after all, how does one fit behemoth players for a scheme initially designed for undersized, quick ones? The answer is the Cable does not simply look for big and tall players, but big and tall athletes.

Consider Bruce Campbell, Jared Veldheer, and John Moffitt - three offensive lineman drafted in the lower rounds for Cable's line in the past two years. Height and weight wise, they don't look very different from the group of players mentioned above: Campbell was 6'6, 314 pounds. All, with the exception of Moffitt, received criticism from scouts about their height and durability. Leverage was also an issue for the three guys. Were they fundamentally sound? Somewhat, but many scouts and analysts concluded that they won't immediately break in at the next level - hence why all three were drafted in rounds 3/4.

Looking deeper however, you'd realize that Campbell, Veldheer and Moffitt were all athletic players - their combine numbers (4.85 sec 40 yard dash for Campbell, 7.4 sec Three-Cone Drill for Veldheer, and a 4.53 sec 20 yard shuttle for Moffitt) were their proof. You can't coach a guy to run a 300 pound guy to run those numbers. That's talent speaking, and talent is what draws Cable in. You see, Cable's confident enough in his coaching to trust in raw players because he believes that with enough coaching, they can be great. It may be a risky gamble, but again, this is any step in building the foundation for the offense. If there's so few O-Lineman that could make the step from NCAA to NFL, why not make your potential rewards even better?

2. The mantra of a large offensive lineman is a Cable fetish is false. Red Bryant, at 333 pounds, is large. Sam Adams, the Seahawk's first round draft choice back in 1994, is large at 351 pounds. So is Albert Hayensworth at the same weight.

Now compare it to Gallery's 325. Not so powerful now, huh? As Kip Earlywine in wrote in an article on Seahawks Draft Blog last year:

With the exception of Satele, every lineman on this list is at least 6’5″, and there are a very high number of lineman with listed heights of 6’7″ and 6’8″. Another thing that stood out to me is how lightweight some of those players were. The taller players are more naturally disposed to have higher weight, so whenever you see a guy listed at 6’8″, 300 lbs. like Mario Henderson, its a pretty safe bet that the guy doesn’t look like a butterball.

Low weight is another common feature. With the exception of Walker, who was signed on a 1 year deal as a free agent when Cable was there and had previous ties to Al Davis, the heaviest lineman on this list is 325 lbs, which is close to prototypical weight for a player who’s 6’5″ and above. 300 lbs. is often considered a minimum weight for most evaluators when it comes to being an NFL lineman, and yet 4 of the 10 players on this list weigh 300 lbs or less, which is even more amazing considering how tall these players are.

Again, this ties back to the key theme of athleticism here. ZBS is designed for athletic lineman, who typically were undersized. Cable adds in the factor of being big and tall, not large. Does this create a bigger impact with blocking? That's hard to say. What we can say is that a lot of Cable's philosophy still revolves around the same principles as those of Gibbs - sort of like how the Shanahan West Coast is similar to Holmgren's.

3. Cable is not a miracle worker. It's true that, by the end of the season last year, our line looked very improved. It's true that he made players like Breno Giacomini look serviceable and revived the career of Gallery. It's true his scheme was a big reason why Marshawn Lynch is no longer Marshawn Lynch, but Beast Mode. Same with Darren McFadden. And the Raiders in 2010.

But there was a reason why Cable was hired as the offensive line coach, not the offensive coordinator. Cable did not initially fare much success during his early years as a head coach in Idaho, and even in the pros he had some busts as well. Consider the fact that in each of the four years we analyzed the offensive line routinely gave up 40+ sacks and plenty of holding penalties per game. While these concerns may be coachable, it also downplays the immense time and effort Cable needs to achieve full on success. Like I said above - Raw, but extremely talented players are something you invest in. Keep in mind also that for every successful Robert Gallery, there's also a Bruce Campbell, or a Mario Henderson that busts. Will it be the same with James Carpenter or John Moffit? Only time will tell...

So what have we learned?

By now, I hope you gain an important understanding of what Coach Cable wants in the trenches. A lot of people want to project the group as the big guys in the league, but that is just a biased and simplified viewpoint of what I think Cable believes.

I think, especially with this interview last year from NFL Network, you can see why Pete Carroll thought he was a good coach. This is one of the finer points in my analysis of Cable's thinking, and it neatly ties in to Carroll's theme of competition, work ethic, and building a team. If Cable's philosophy lies in offense, the mirror would be with defense in Carroll's view.

And maybe instead of just "Winning the Day", Cable could "Win Forever" with our roster.

Stay tune next week for another analysis - this time focusing on the draft and what prospects might be on Cable's radar come April 26th.