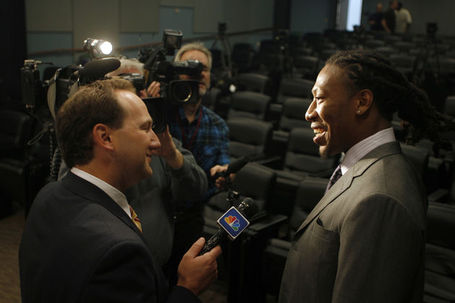 The aftermath of the NFL Draft always brings with it the cold reality of post-draft squawking from the proverbial peanut gallery that inevitably rankles some fans. If I may digress momentarily; would that some fans cared as much about their own course grades or job performance evaluations as they do about post-draft grades from the likes of Kiper and McShay. Sigh.

At any rate, the point of this post is NOT to suggest that we should ignore everything the pundits say about this draft for three years. Where's the fun in that? The Seahawks have just concluded a draft almost universally regarded as "meh" by the analysts, even some (like Rob Rang) who it's fair to say know Seattle reasonably well. Lots of Cs and Ds, although if you read through you'll hear lots of equivocation. (If it's one or two sentences per team don't waste your time.) Perhaps the best quote comes from Mel Kiper, Jr., the guy so many of us love to hate (as quoted in the Williams piece): "Let's be clear: I think the Seahawks drafted the guys they really wanted with a plan in mind for how to use them."

I'm not so concerned about how "right" the pundits are, since that part we really won't know for a while. I'm concerned with where the discourse about Seattle's draft converges, and whether there is any wisdom to be gleaned from the peanut gallery. Right now, I see the post-draft discourse converging on two basic questions.

1. Was Bruce Irvin a "reach" at 15th overall? Classically, he almost certainly was--in the sense of having more "highly rated" players available--regardless of which other teams were interested in selecting him in the first round. However, as I noted in another post, this draft--the first under the new CBA--may get the punditocracy to begin re-thinking how it puts together its boards and what it means to "reach." (Or, if I were feeling more charitable towards the bastard Niners for drafting one of my favorite college players, I might call Aldon Smith's 7th overall selection as a pass rush specialist the start of a possible sea change.)

At the risk of overstating things, the old CBAs structured in strong incentives for front offices (i.e., not coaching staffs) to select "talent" first then fit scheme around talent. In the abstract that's the right thing to do, but the devil is in the details. Teams tended to place a premium on talent that translates across schemes while simultaneously discounting scheme-specific talent (e.g., 3-4 OLBs) and specialized roles (e.g., slot corner). "Coaches and their schemes," front office thinking went, "may come and go, but that first round contract shackles us to this player."

Coaches and schemes still come and go under the new CBA, but contracts are cheaper and far more standardized. If nothing else, teams basically know what a player will cost over the life of a deal before he even signs. I imagine the Niners sitting at #7 in 2011 looked at Smith and thought, "If this kid averages 8 sacks per season, we couldn't buy that on the market for what we'll pay. Who cares if he's a 'specialist' at 7th overall? What matters is what it costs." For this, and a host of related reasons, I think that over time front offices will lessen the premium on talent just because it fits across schemes AND lessen the discount they traditionally applied to scheme-specific players and specialized roles.

Bruce Irvin is a great illustration of what could become a trend. He is both scheme-specific and a specialist; about as narrow as it gets. I'm reasonably sure Smith will develop into an all-around player. I have no idea whether Irvin will. It's obvious why Seattle rated Irvin highly. He was born to play LEO. And, it is equally obvious that he is a classic reach. So I can't blame the pundits for being skeptical. But, I can blame them for failing to question their assumptions. They are asking, why did Seattle reach? They should be asking, does it beg the question to label a player a reach because he has a narrow skillset? Or, to put it another way, in the era of standardized contracts, is there any such thing as a classic reach* anymore?

*My emphasis is on "classic." To be clear, I still think teams can "reach" on players. Even in Irvin's case, there are reasons to be leery about a guy with his background suddenly becoming a multi-millionaire. I found Art Thiel's first Irvin column to be a wee bit of a hatchet job, but he raises an important question in his subsequent column. We know Irvin can handle adversity. Can he handle success?

2. What's the Deal with Russell Wilson? What the PC/JS regime is looking for on defense has become somewhat more clear over time, but the offensive skill positions are still a bit less clear (esp. at QB). Every indication is that the front office and coaches adore Wilson. They passed on some talented guys, all of which had at one time or another been linked to Seattle, to draft Wilson (e.g., Mohamed Sanu, WR; Bernard Pierce, RB; Sean Spence, LB; Demario Davis, LB). People are all over the place in interpreting the selection's meaning and implications.

Perhaps the easiest piece to address is the height issue. It's obvious that Seattle is willing to tailor aspects of the passing game to fit what Wilson does. That doesn't mean that height is "overrated" (no matter how much Jon Gruden bullies and pouts). What's less obvious is whether they see Wilson as a potential day one starter or a high-quality backup with fringe starter potential. Even the latter in my humble opinion is worth a 3rd round pick. Where I usually don't pay much attention to the training camp blow-by-blow, I will now.