My belief, based on the recent Matt Flynn acquisition is that this quarterback will be a "boom or bust" type prospect. Meaning, the prospect will posses the potential to be a franchise quarterback for years, but also has the possibility of complete and utter failure to make the transition to the NFL. For this reason, I don't believe that we will see a Kirk Cousins or Brandon Weeden type quarterback in the new Seahawks uniform. Matt Flynn gives the Seahawks a QB with high football IQ, but limited physical upside, and the use of a draft pick on this type of prospect doesn't seem prudent to me. Below, I've outlined some of the "low floor, high ceiling" quarterback prospects that I believe the Seahawks will strongly consider on draft-day.

The Seattle front office reportedly attended the ASU pro day in numbers, presumably to check out Osweiler. Though the front office has a history of misdirection when it comes to the draft (see Ryan Mallet), I believe that their interest in Osweiler is legitimate, and I could see them considering him as early as the 3rd round.

Arm strength is generally regarded as one of Osweiler's biggest strengths, and despite a wonky throwing motion that fails to take advantage of his 6'7'' height, he manages to sling the ball downfield with relative ease. Osweiler has surprising mobility for a big man, and moves well outside the pocket. In addition, Osweiler, who is often described as a hard worker possesses above-average leadership abilities, and was elected to be a captain his junior year at ASU. Osweiler's most appealing aspect is his potential for growth. At only 21 years of age, Osweiler has outstanding potential to grow into a NFL quarterback, albeit after spending at least 1 or 2 years on the bench.

However, all of this is not to say that Osweiler is a surefire NFL superstar. If you need to see the potential for failure, just watch him against Boise State. Osweiler consistently forced throws and struggled when he was asked to do more than throw short swing passes to his running backs. I think that Osweiler is a better prospect than he showed in this game, but it shows the "bust" element that I think any QB the Seahawks draft this year will posses.

Furthermore, Greg Cosell, senior producer at NFL films and respected NFL analyst (and someone I will be quoting at certain points throughout this piece) was down on Osweiler in a podcast he did with Shutdown Corner's Doug Farrar.

He did not have a strong arm... I did not think he was highly accurate... I wasn't a big fan...I thought there were similarities to Charlie Whitehearst when he came out of Clemson... Not enough good throws that transition well to the NFL.

It's undeniable that Osweiler has potential, it just remains to be seen whether he can turn his height, strength, and mobility into NFL production. 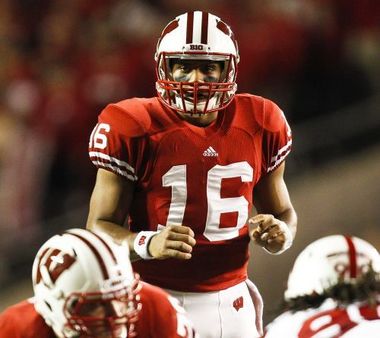 If you didn't see it at the time, Danny did a great write-up on Wilson earlier, so this will be a bit more brief.

Russell Wilson would without a doubt a first-round pick if he were a couple of inches taller. However, at 5'11'', many question whether he can make the transition to the NFL. Wilson has good arm strength and accuracy, in addition to possessing a high football IQ. In addition, Wilson is an excellent leader and was elected as a captain during his only year at Wisconsin. Finally, Wilson is one of the draft's more mobile quarterback, and is arguably at his best when he is on the move.

Wilson's ability to succeed in the NFL hinges on whether or not his height will impede his ability to read to defense. At this point there is no way of knowing whether it will simply have a marginal effect, allowing his to become a franchise quarterback, or whether it will prevent him from being able to function in a pro-style offense. 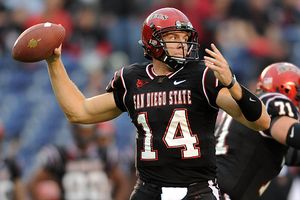 Ryan Lindley is one of the more intriguing quarterback in this years draft. According to Cosell, Lindley made more NFL type throws than any other QB he evaluated on film. Lindley comes from a pro-style offense at San Diego State, and is likely the most pro-ready quarterback on this list. Lindley has adequate arm strength, but often has too much confidence in his ability to throw into tight windows.

Lindley has an above-average pocket-presence, but is far less mobile than most of the other quarterbacks featured on this list. In addition, Lindley is extremely inconsistent with regards to accuracy, a worrisome attribute to say the least. Finally, Lindley has a history of forcing throws and poor decision making, something he will definitely need to work on to succeed in the NFL.

I believe that of all the quarterbacks on this least, Lindley is probably the least likely to be drafted by the Seahawks. Lindley's tendency to force throws, a definite no-no on a Pete Carrol team, in addition to his lack of 'plus' mobility makes his an odd fit for Seattle's offense. Nevertheless, Lindley is an intriguing prospect that I could see fitting in Seattle if he falls too far on draft day. 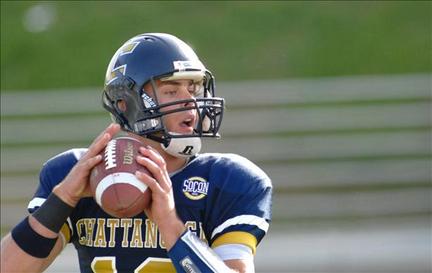 Report Danny did back in January

BJ Coleman's recent pro-day reportedly featured representatives from the Seahawks. Coleman is a 6'5'' Tennessee transfer that has 'plus' arm strength and an admirable approach to the game. Coleman studied Peyton Manning's dropback, play-fake, and release, and it has apparently paid off, given his above-average mechanics. In addition, Coleman features an exceptional work-ethic, and received rave reviews on his coachability and football IQ.

Coleman features average mobility, and is more of a pocket-passer who will not outrun many defenders. The primary question with regards to Coleman is his lack of college production, magnified by the fact he played against inferior competition in the FCS.

I'm not entirely sure how well Coleman fits within Seattle's system, but given his arm strength, adequate mobility, and intangibles, it would not come as a shock to see Coleman in Seattle. 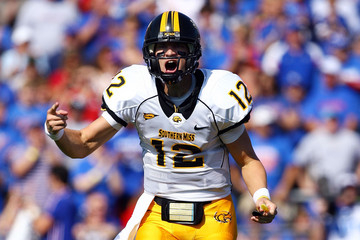 Austin Davis combines positive mobility with natural leadership and a high football IQ. Davis doesn't force throws, and shows the experience he gained by starting for four years. However, Davis may have some physical limitations, as he is shorter than the average NFL quarterback, and struggles with arm strength at times.

Overall, Davis is a talented, albeit limited passer that lacks the upside that I believe the Seahawks will be seeking in the draft. That being said, his mobility and intangibles may lead the Hawks to take a late-round flyer on Davis. 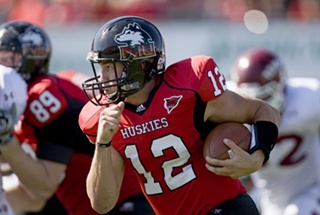 Chandler Harnish, who reportedly visited with the Hawks, was a four-year started at Northern Illinois, and earned the MAC offensive player of the year award as a senior. Harnish is excellent as a runner, in addition to being an excellent leader (received the MAC's leadership award as a senior). Harnish put up jaw-dropping stats at NIU, though one would hope so given the inferior level of competition he faced.

Harnish's accuracy, arm strength, and size are simply average, and he will have to adapt to a pro-style offense. Given his excellent mobility and ability to "tilt the field," I wouldn't be suprised if the Seahawks used a late round pick on Harnish.

Thanks for reading my first fanpost!

Feel free to discuss who you think/want the Hawks to do with regards to the QB position of draft day.