I had so much fun researching and writing the Seahawks' Defensive Scheme Versatility/Diversity piece the other day that I thought I would expand that series to the offensive side of the football. Unfortunately, breaking down offensive schemes is a bit more complicated, what with the encyclopedia-sized playbooks and infinite wrinkles and variations to every play that every team has. It's no wonder it takes quarterbacks several months to completely master any given playbook, so I'm not going to get super specific; instead, I'm going to talk about the different personnel groupings that the Seahawks frequently feature.

According to a six-week sampling of personnel grouping and snap count tracking that we did here at Field Gulls (h/t to Chad Davis, once again), the Seahawks most commonly used packages are their "11", "12", and "22" groupings. As a refresher, when you hear those numbers called out, it's referring to "Number of Running Backs" and "Number of Tight Ends". So, "11" is 1RB, 1TE. "12" is 1RB, 2TE, etc. This is the most commonly used vernacular - I've seen Matt Bowen use the different names - "ace personnel," "joker personnel", "jet personnel" or whatever, but I don't know those by heart - I was not in the NFL and the number system is infinitely less easy to screw up. So that's what I go with.

I digress - with the vast majority of snaps coming in '11', '12' or '22' groupings, it's clear the Seahawks did not run a spread, run and shoot type offense; in fact, from Weeks 10 to 15, the Hawks used 4WR or 5WR sets only 5% of the time. Conversely, in that timeframe, in which Seattle had games against the Ravens, Rams (x2), Redskins, Eagles, and Bears, the Hawks featured at least 2TE in over 50% of their snaps. This team, in 2011 at least, liked their heavy packages and apart from that, leaned heavily on the "11" and "12" personnel groupings (very basic, pro formations).

Whether the Hawks spread things out going forward with Matt Flynn (obligatory "or whoever") at quarterback in 2012 remains to be seen. I would like to get my hands on some tracking of Packer offenses but just off the top of my head I'd guess they used 4WR, 5WR sets much more often than Seattle did (that, or used Jermichael Finley as a slot WR/TE), so perhaps things will skew towards that with Flynn under center going forward. It will be fun to watch for, but in the meantime, let's take a look at some of the things Seattle did in 2011 with their different groupings.

First, the "22" formation. In a nutshell, the "22" sets featured 2RB and 2TE, typically in a balanced I-formation with one receiver split out (typically Golden Tate or Deon Butler toward the end of the year). Of course, there are many things you can do with this grouping - overload both TEs to one side, send them in motion, motion Michael Robinson to the wing, bring your wide receiver in tight - the options are many, and the Seahawks utilized a great many of the options.

To start out, let's talk about the ability to pass out of the "22" set. With two tight ends and two running backs, opposing defenses naturally lean toward defending the run - and with good right - the Hawks ran the ball about 75% of the time out of this grouping.

Below, you can see the Seahawks in "22" against the Rams basic 4-3. The Hawks are past midfield here and line up with an even set - Zach Miller to the left, Cameron Morrah on the right, Lynch and Robinson in I-formation. Deon Butler starts on the right wing but motions in to the slot-back position, behind Morrah. Ball is snapped. 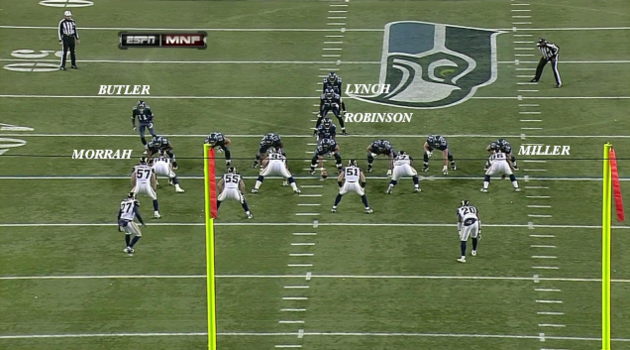 From the angle below, you can see the Seahawks sell play action very well. Morrah and Giacomini double down on the defensive end to the defensive left in what looks like a sweep to that side. You can see pretty much every player on the offense, save for Butler, moving to their right, and on the defensive side of the ball, everyone is going left except for the safeties - who, for their part, don't bite too hard. 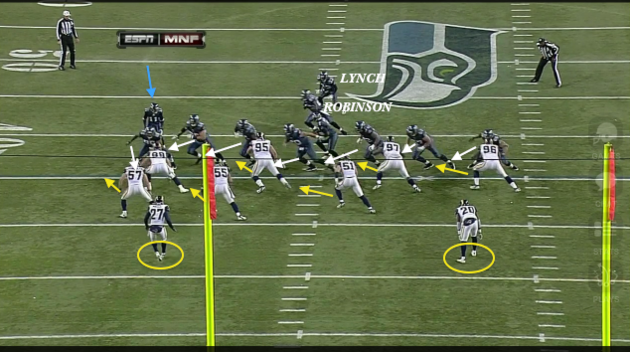 Below, you can see the play develop. It's a play-action bootleg by Tarvaris and Deon Butler runs across the formation behind the line of scrimmage. The Rams RDE is the only player on the line to stay home and he comes in at TJack unblocked. Also, below, you can see that Morrah has chipped off the block and is now making his way downfield as a second option for Jackson. Zach Miller has also chipped and is downfield blocking on the safety in a mini-screen type of deal. 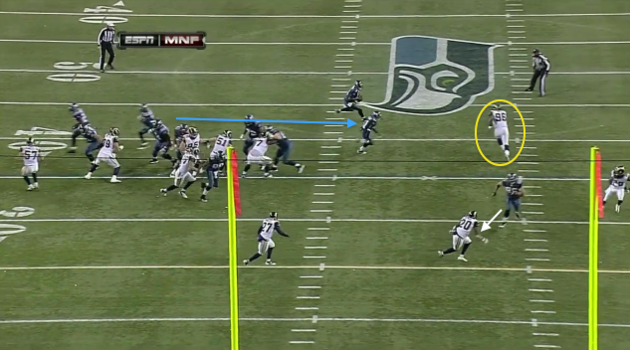 The play isn't timed perfectly because Jackson pump fakes in the face of the oncoming defensive end, thus delaying the pass and delaying the ball getting to Deon Butler's wide open hands. He also doesn't lead Butler, and the catch and run is awkward and slow developing. This means the play only goes for six or seven yards, as the defense adjusts and reacts quickly. Overall, I nice little play though - and with better execution - timing and ball placement - could have been a jail break type of thing with only one or two guys to beat downfield. (I'd also prefer Golden Tate catching that pass - he's a much stronger runner, but that's just me). 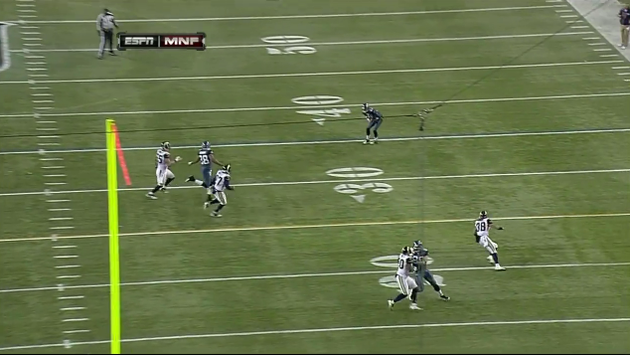 I've lined up two or three more plays out of "22" that I want to break down, and I'll put those together in the next day or two.