In Part I we talked about throwing out of the "22" personnel formation and there are a number of ways you can do that - with "22", a lot of the time, the WR split end or flanker will be on an island, more or less, against the corner so the fade or sideline route is one option. Tight ends are often targeted in the passing game in this personnel package. Even the running backs can be used as receivers fairly often in this look. I'm not here to break down every option, because there are many, but instead just want to look at a few different things the Seahawks did in 2011. As I said earlier, the "22" personnel grouping, at least when it came to our six-game tracking, was used about 75% of the time to run by the Seahawks, from Weeks 10-15. A vast majority of the time, Seattle employed the KISS methodology of offense - Keep It Simple, Stupid. By varying inside runs with outside runs, mixing in a few passes and misdirection bootlegs, even though the defense knows you're going to run, you can still have a lot of success.

I'm no expert on the zone blocking scheme, though I think I have a grasp of it, but Chris Brown of Smart Football described it in very simple and digestible terms when he said:

Below, you see the Seahawks driving, nearly to midfield, against the Rams on MNF. Again, the Seahawks are in a balanced formation with Zach Miller to the right and Cameron Morrah on the left; Marshawn Lynch and Michael Robinson are in I-formation. 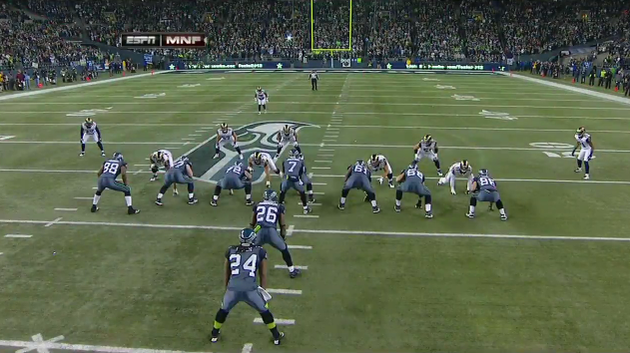 Upon the snap, you can see the 'zone' principles at play. Cameron Morrah is uncovered so he helps his 'covered cohort,' as Brown put it, until he is effectively sealed. You can see Robert Gallery already moving into the second level to make a block, as he's uncovered against this defensive scheme. Same with RT Breno Giacomini. 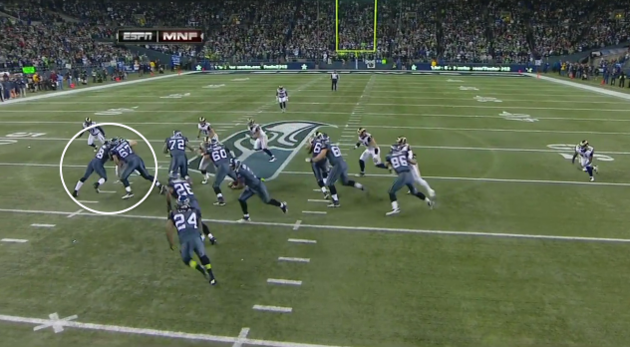 Below, you can see that LT Paul McQuistan has maintained his block. The nickelback/linebacker coming off the left edge above is picked up by Michael Robinson, beautifully (seen below). Also, Morrah has moved on to engage a linebacker at this point, as McQuistan is holding his own. Gallery is effectively hiding the other linebacker from the play.

It's easy to see the hole that Marshawn Lynch will be heading through in this still. 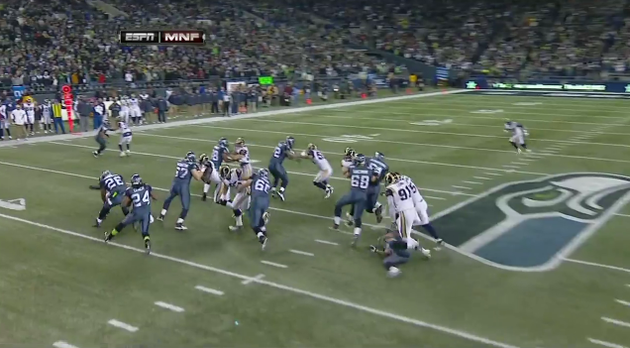 Below, you can see that Lynch hits the hole quickly and begins making his way downfield. Golden Tate is doing an excellent job on the outside in sealing his defender, and you can see how effective the offensive line has been in their blocks. 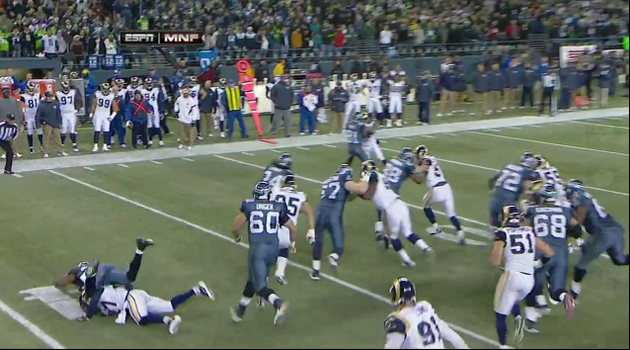 Note again that this was the first play from scrimmage in this game for Seattle. As Brown puts it - "Once the defense begins flowing too fast to the sideline, coaches typically dial-up the inside zone." I'll break down an inside zone run from this game in part III. Stay tuned.