Before we get into part three - make sure you go back and check out my earlier breakdowns of the Seahawks' use of "22" personnel packages in Part I and Part II. Part I broke down a play-action bootleg pass from this set, Part II took a look at an outside zone run, and Part III goes the other way with the Seahawks' use of the inside zone run. As noted in the outside zone piece, teams will often start with outside runs (Part I was the first play of the game for the Seahawks), get teams' defenses flowing to the sideline and when they overcompensate, bust an inside run right up the middle.

Below I've broken down one of these plays.

The play below is from the Seahawks' Thursday Night matchup against the Eagles in Week 13, and it should be noted that on the Seahawks previous possession, (3 plays prior), Marshawn Lynch had bounced a run to the outside for 40-yards and a touchdown. You have to believe that play is still weighing on the Eagles defense's minds.

Back to Smart Football's great breakdown on zone runs: "Once the defense begins flowing too fast to the sideline, coaches typically dial-up the inside zone. The rules are the same - covered and uncovered - except this is more of a drive block as the aiming point for the runningback is inside."

"The play often results in a cutback if the defense is flowing fast for the outside zone, but the difference between the outside zone is one of technique, not assignment."

Seahawks are in - you guessed it - their '22' set with Deon Butler split right. The Hawks start heavy to the left but motion Cameron Morrah to the right to even things out. 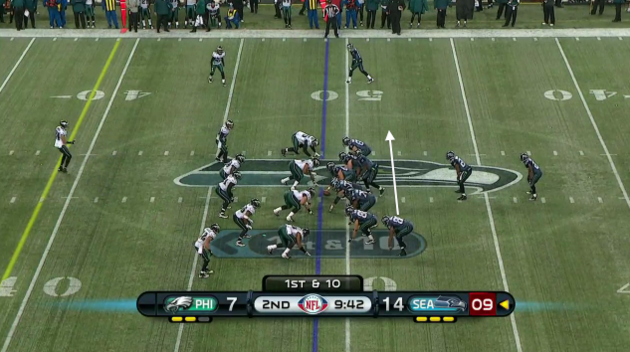 Below, you see Morrah end up on the right and the nickelback to that side adjusts slightly. Other than that, there's not a great reaction from the Eagles here in response to the motion. 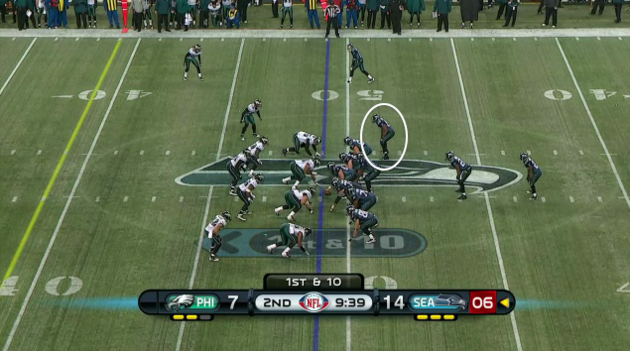 The ball is snapped. Smart Football: "On the inside zone the runner aims for the outside hip of the offensive guard. Now, his read can vary by team. Some teams have him read that three technique defensive tackle, while others have him read the middle or "Mike" linebacker. In both cases the idea is for him to find the "vertical" crease - either straight playside off the guard's hip or backside on a cutback."

Below, you can see that Zach Miller seals the OLB to the left side of the offense and Russell Okung downblocks HARD on the Eagles' 3-technique in this look. The 3-tech seems to be thinking inside run - and maybe that's how it was drawn up, but Justin Forsett sees Okung seal up the 3-tech and BOOM, puts his foot in the ground, changes direction, and gets vertical. This isn't a counter play - you can see the side that Tarvaris hands the ball off on, and you can see Forsett's first two steps or so. In the zone though - when you see a crease open up, you hit it, and hit it as quickly and decisively as you can.

Two things to note - Zach Miller is a beast of a run blocker. Just look at the job he's done below. Two - it's pretty fun to watch Okung on this play, live. He gets up, fist pumping and clapping so he must have felt great about the block he laid. 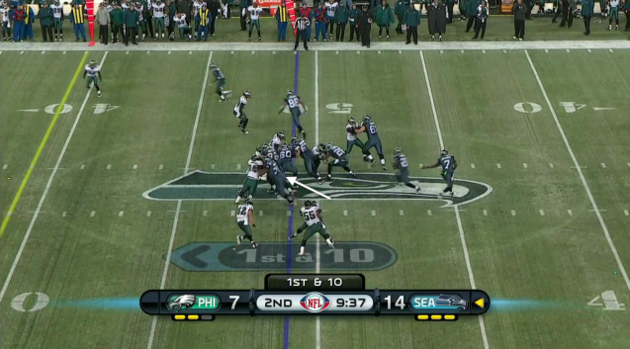 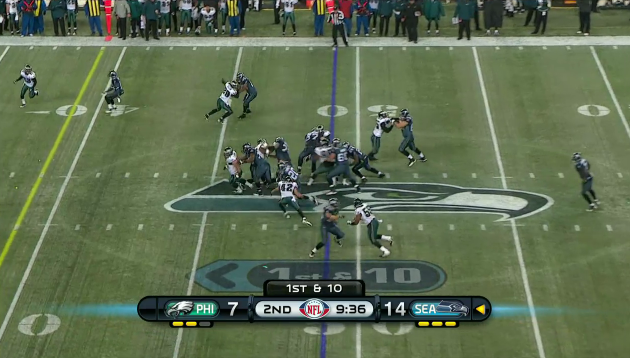 Six yards in the bat of an eye.

This play actually reminds me of a post that I did mid-season, when the Seahawks played the Cardinals, and it is worth revisiting. The setup - It's 2nd and 7 from the Seahawks 35 yard line. The Hawks were down a touchdown and driving with 5:36 left in the 2nd Quarter. Pre-snap look: 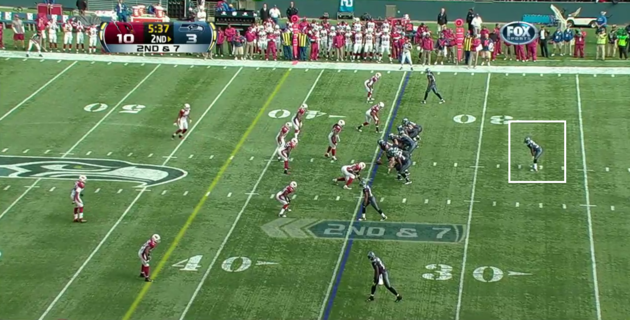 You can see Leon parked about 6 or 7 yards off the line of scrimmage (this is "11" personnel but works well to illustrate an 'inside zone' run). Washington's split behind the quarterback is fairly deep. Mike Williams is lined up to the left flank and Sidney Rice is to the right. Doug Baldwin is in the slot. Ball is snapped.

You can see, above, Washington take the handoff and Max Unger has done a good job against the Cardinals nose tackle to get good leverage. John Moffitt doubles up on the NT but then at the last second veers north to occupy the middle linebacker, Paris Lenon (zone principles). The play appears to be going left, and might even be designed that way (in which case, LG Paul McQuistan should probably disengage and move to the second level a tick quicker - you can see him do so below). However - RG John Moffitt does a great job of sealing off the man in his zone, and pairs with James Carpenter, who turns at the last second to seal off the strong side linebacker. Just enough to clear a crease, and below you can see Leon make his cut.

He plants his foot and makes his cut downfield. The hole opens up just enough for him to run through and although it doesn't really matter much in terms of Leon getting through the line, props to Doug Baldwin for laying a pretty good block on the nickel back there on the top left of your screen. This allows Washington to get more yards once he's past the linebackers.

You can see that Moffitt has held up the MLB Lenon just enough that an arm tackle of Washington proves futile. (Also, Moffitt got away with a bit of a facemask.. but who's keeping track?). Once Leon gets past Lenon, he's got some green in front of him.

Before it's all said and done, Washington has picked up 21 yards in a matter of a few seconds.