I started out this series (PART I, PART II & PART III) by looking at the Seahawks usage of '22' personnel - two tight ends, two running backs, and one receiver. We looked at an example of how the Seahawks passed out of this group and also at their usage of outside/inside zone runs. This grouping was used quite a bit by the Seahawks in 2011, particularly more so toward the latter part of the season as the Hawks run game got clicking, and I imagine it should continue to be a staple of the Seahawks offense going forward.

Today, I am going to take a quick look at the Hawks' use of four wide receiver sets - something they did exceedingly rarely in the 2nd half of the season. According to our six-game charting from Week 10 to Week 15, the Hawks went four-wide in 14 snaps, and featured five wide receivers only 5 times. That's 19 snaps out of 380 during that time period, so as you can see the Seahawks are anything but a spread offense. Still, even though they're 'exotic' to this offense, they're interesting to break down, and the major question in my mind is whether the Seahawks will start to feature these personnel groupings and formations more in 2012 with changing personnel, most notably at quarterback. Let's use our imaginations for a while.

Matt Flynn comes from a Green Bay system that likes to spread things out a little more, and without quoting the actual statistics on that (because I don't have them), just from memory I feel like the Packers featured 4WR, 5WR sets much more often than we saw here in Seattle last year. With a quarterback like Aaron Rodgers, it makes sense to put offensive weapons on the field and give him options to move the ball downfield quickly. Now, obviously Matt Flynn isn't on the same level as Rodgers but because he's played in that system for the last four years, it's conceivable that if he wins the starting job the offense could lean on these groupings more often. The Seahawks have shown an ability to adapt the offense to the quarterback that's playing over the last two years, with Matt Hasselbeck, Charlie Whitehurst, and Tarvaris Jackson.

If Russell Wilson enters the fray, we may see some more frequent 'spread' looks just because of his (from my perception) ability with timing passes and throwing with accuracy, a couple of things that Tarvaris Jackson struggled with for the most part in 2011 (though, the two plays I highlight below are exceptions to that statement). The Seahawks frequent use of the 'heavy' personnel groupings in 2011 makes all the sense in the world, considering who was starting at quarterback. Run the ball hard, set up play action, and play to Jackson's strengths - toughness, mobility, and more importantly, a very strong arm. In "22" formations, you don't see a ton of quick-timing plays or 'thread the needle' throws - more often than not you see a play action fake, bootleg or roll-out, and a throw over the top or dumpoff underneath on a crossing route.

We'll see, but after the jump below I'll break down a few plays.

Below you can see the Seahawks in "10" personnel - 1RB, 0TE. Mike Williams, Golden Tate are to the left and Doug Baldwin and Ben Obomanu out right; also I've penciled in the routes each receiver will run. In my short sampling of games, I'd say the most common time these looks were trotted out were in third and medium distance situations - in this case, it's 3rd and six, at home against St. Louis in Week 14. The Hawks are at their own 41-yard line and looking to keep a drive alive. 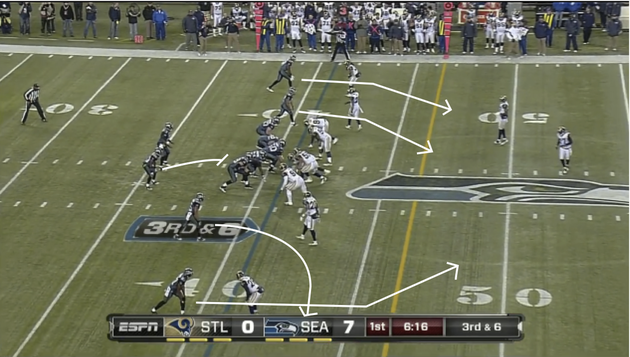 The ball is snapped. Justin Forsett stays in to protect; Williams and Tate run parallel slant routes. The play is designed for Mike Williams and my guess is that the main reads for Tarvaris here are obviously the guy playing heads up on BMW and then the safety to his side, as seen above. I'd love to tell you what the safety does in this situation after the snap, but he's off screen for the entire play - likely in deep coverage - so I assume it was an easy read for Tarvaris to snap the throw through to Mike.

The nickelback stays with Golden, and BMW gets a clean release to the inside. You'll see, in the next two photos, that the corner on Williams tries to overplay on the sideline side and come around but isn't quick enough. A nice throw by Jackson on this one, and he showed nice decisiveness and accuracy to complete the pass. 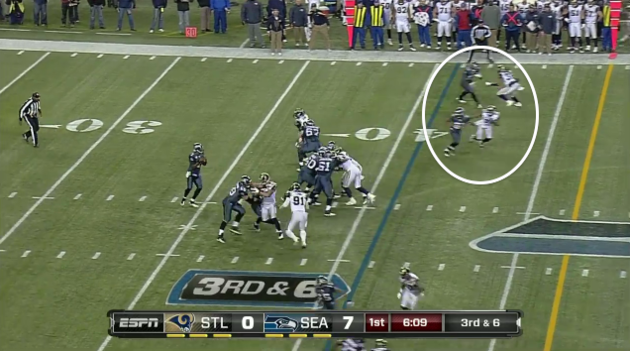 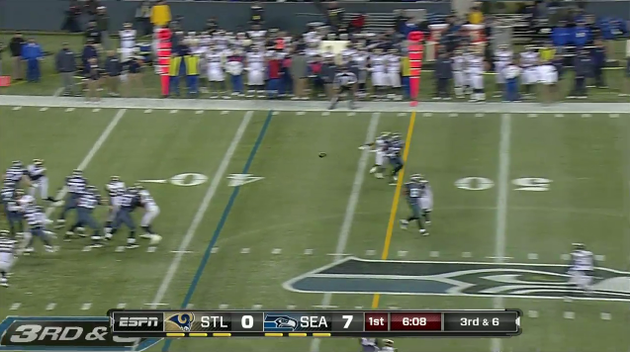 Tarvaris puts the ball where it needs to be and Williams comes up with the catch for a first down. 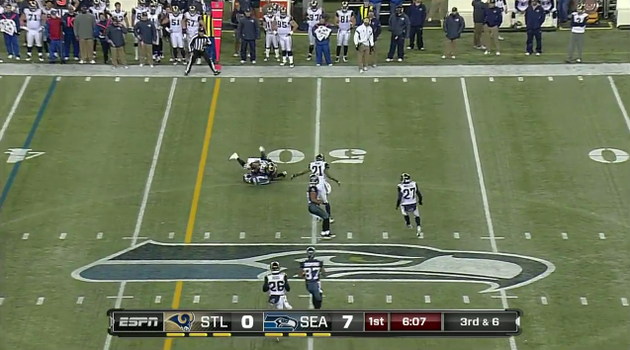 Later that game, a similar situation. 3rd and 4, Seahawks looking to keep a drive alive so they break out the following "01" look - no backs, with Cameron Morrah split out to the left a few yards. The Hawks have Ben Obomanu to the far left, Golden Tate in the slot, with Deon Butler and Mike Williams to the right. Again, the play is designed for Mike Williams and when you go back and watch Weeks' 14 and 15 (Rams and Bears), several 3rd down plays were drawn up with BMW in mind and he delivered on four of them.

Regardless, you can see the set below, and I've drawn the routes each player will run. It looks like the Rams are in a nickel package (5DBs) here - one deep safety with two in slot coverage against Tate and Baldwin. 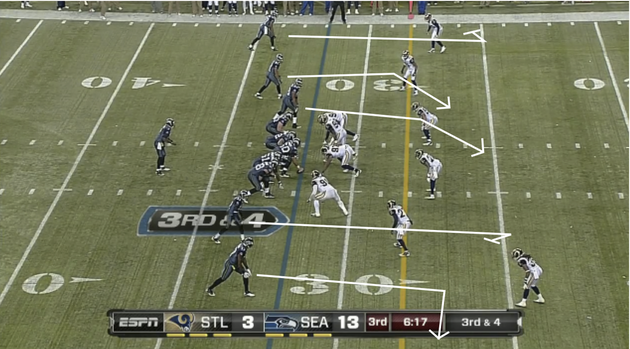 You can see the routes and you can see the assignments. Interestingly, it looks like a zone from St. Louis, as the safety that was lined up in front of Doug Baldwin passes him off to the linebacker and heads toward the flats (below), where Mike Williams is running his route. 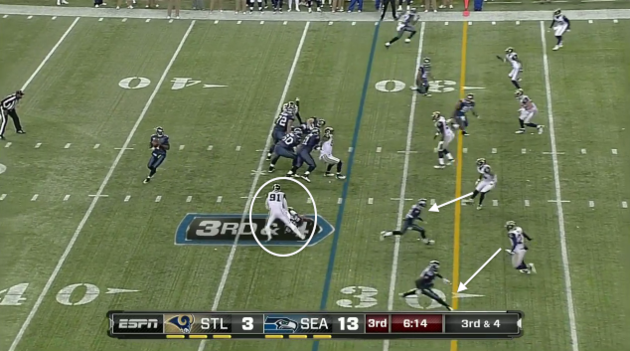 Again - Tarvaris Jackson makes a timely throw with no hesitation and hits BMW on the out route, in the soft spot between the nickelback and corner - who are both closing quickly. 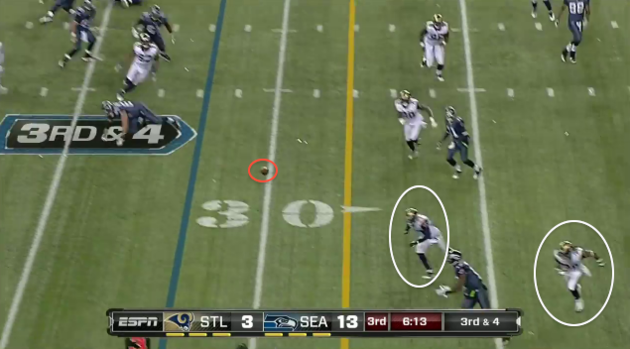 Above, you can see how close the pass was to getting deflected/picked off, but it finds it's target. 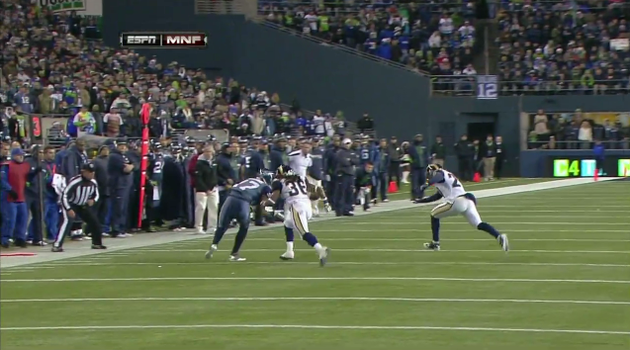 It's not really a coincidence that the two catches that Mike Williams made in this game were from these four-wide sets. Quick-hitting, thread the needle type throws that Williams was able to come up with - that's how BMW made his money in 2010 with Matt Hasselbeck throwing him the football, and part of the reason he only came up with 18 catches in 2011 was that these bang-bang plays diminished in frequency, with the Seahawks instead working more with play action and slower developing drop-backs and routes. That's a generalization of course - Williams had his share of drops and couldn't get on the same page with Jackson, but scheme might have played a part as well.