Winston Guy is another piece to the Seahawks secondary puzzle as a rangy, long (6'1, 218, 33" arms) defensive back/linebacker tweener that played corner his first year at Kentucky, safety the next two seasons, then a hybrid linebacker spot last year for the Wildcats. He was 2nd in the SEC in tackles in 2011 and just from watching some of his games there, was used in a wide variety of roles. He was up on the line as a strongside backer in some looks, out in the slot in some cases, and deep in the middle of the field in others.

What you'll immediately notice about him is that he's great at slipping past the line into the backfield and blowing up run plays, but was also able to drop back into coverage at times as well. The pass coverage part of his game is supposed to be his weakness and I've seen people complain about his poor combine 40 number, but from what I understand he was battling a groin injury at the time and is probably more in the 4.45-4.50 range rather than the disconcerting 4.7 range from the Combine (ran a 4.53 at his pro day - I'm assuming groin injuries don't heal super quickly though). I know the Seahawks value speed at the defensive back position and it would be out of character for them to take a guy whose real speed is in the 4.7 range. Let's hope his slow time at the Combine made him a bargain for the Hawks in the sixth.

Regardless, the Hawks immediately started talking about how he's a possible replacement for that "Atari Bigby" role on this defense. I tried to lay out a bit exactly what that role entails in this post, but in a nutshell, Bigby was an in-the-box safety type, where he was swapped in for - in last year's case mostly - K.J. Wright or the strongside backer, and provided a little more speed and versatility to get into the backfield or run with tight ends and running backs but still play the run well and attack the quarterback at times.

I watched the game footage (coaches tape, which is cool) of the Kentucky - Tennessee matchup from last year, and broke down a few plays. I'll include the entire clips below.

Below, (32 seconds into the first video) you'll see Guy lined up on the line in the spot where you'd traditionally see a strongside linebacker. The Vols are in their 21 personnel grouping - split running backs flanking the shotgun quarterback, with reduced split receivers on each side. 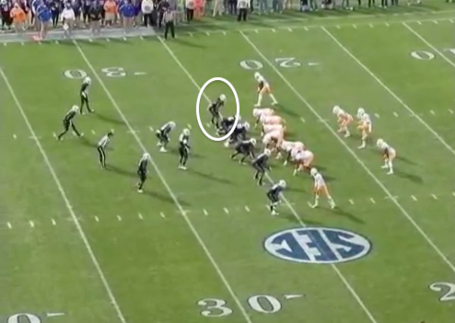 The ball is snapped and Tennessee executes a sweep right - the tight end downblocks with the tackle pulling right. Guy is supposed to be blocked here by the receiver but slips that easily, sneaking past the pulling tackle and the other running back lead-blocking. 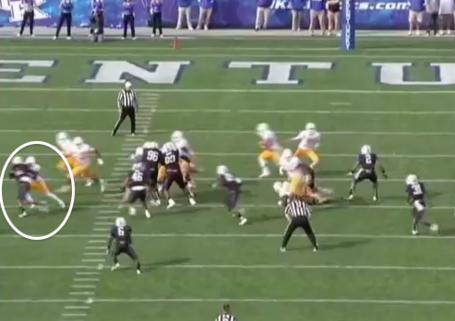 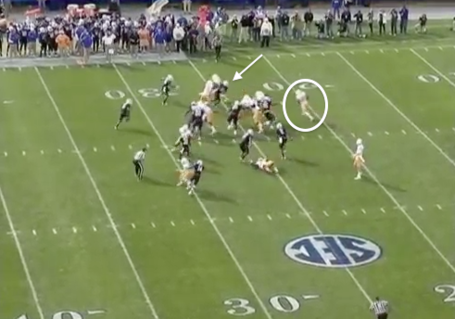 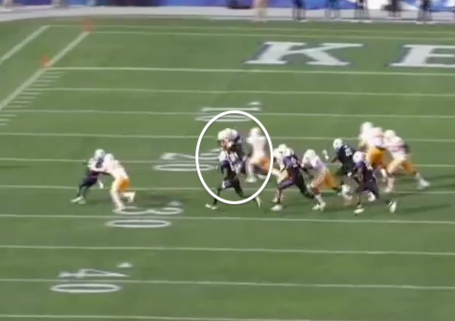 This shows good recognition ability, anticipation to get to the right spot, outside his blocker and past the pulling tackle. He wraps up well and the play goes for a loss. More after the jump.

Later in that half (5:08 on first video) - Guy is aligned to the strong side but doesn't follow when the tight end motions to the other side of the formation. The Vols are again in 21 personnel with two running backs and one tight end. The fullback is offset right to the quarterback, who is in a pistol pre-snap look. It's a run right off tackle, and Guy comes around the edge and hits the running back in the backfield, dragging him down. Nice play here, and very reminiscent to a few plays we saw Atari Bigby make this last season. 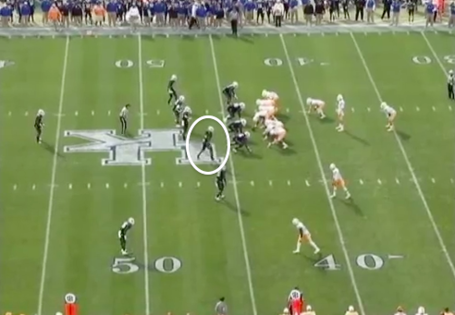 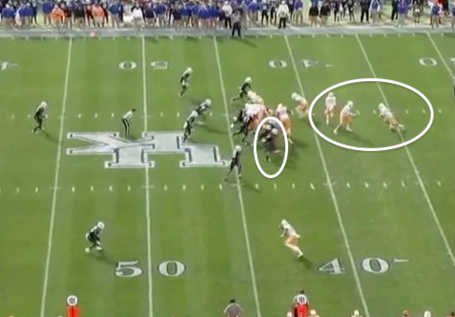 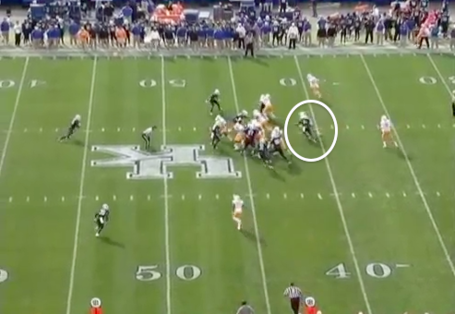 Later, in the 2nd half (2:13 of second video). Guy again aligned up near the line of scrimmage, off the tight end. Below, you'll see the Volunteers QB again in pistol, with a running back behind him. The call a draw here, and Guy stunts underneath the 3-tech on a designed blitz. 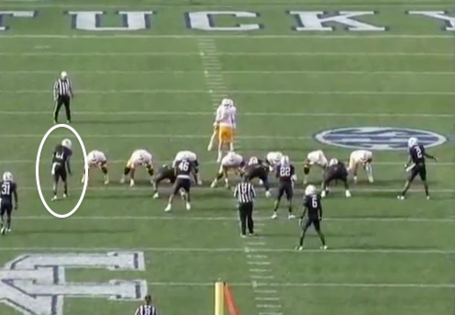 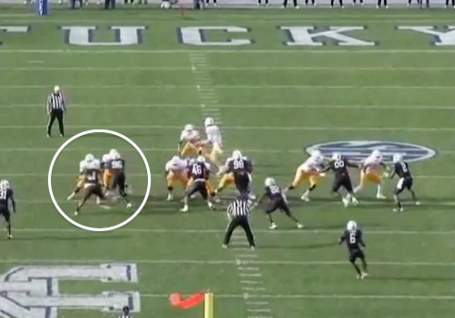 Above, you can see the DT occupying the tackle and tight end, and Guy sneaks in through the B gap. He has to do a nifty little strafe move through the gap because the guard is just a second too slow in reacting. 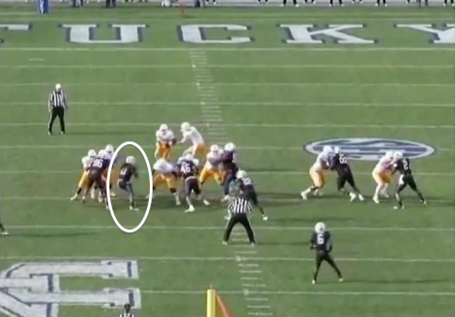 The running back tries to slide to his right but Guy drags him down. Nice play to get into the backfield. 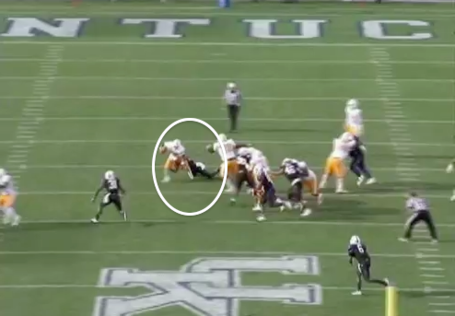 I may do more of this down the line but this is a good starter for the ways in which Guy was used in Kentucky's defense. If you watch below, you'll note that he's out on the slot at times on a receiver, and even in the deep middle playing a safety role at others. He mirrors tight ends as they release in others. He's essentially a big nickelback. The Wildcats used a hybrid type of scheme and this gave Guy a lot of experience doing different things.

Said Pete Carroll after drafting Guy: "He's a versatile player, they moved him around in the kind of fashion that we liked moving our guys around. We're very excited about him; he's a very aggressive kid. We've got a real spot in mind. He plays a lot like our guy last year, Atari Bigby."

"All of those things that we used Atari, we thought that this kid fit the role very well. So we'll see what happens; we can't tell until we get him out there."