In PART I of my look at some of the 'spread' offense type looks the Seahawks ran in 2011 - specifically their 4WR "01" and "10" personnel groupings - I outlined a couple of quick hitting plays on 3rd down in which Darrell Bevell drew up targets for Mike Williams on the outside. (Also check out PART I, PART II & PART III of my look at the "22" personnel grouping from 2011). In those plays, taken from Week 14 at home against the Rams, the Hawks used four wide receivers to create one-on-one matchups against the defensive secondary or to overload a sector when the opposing defense was in a zone.

In both cases, Williams was able to get open and make a catch for a first down; the first example a simple slant route in which Williams was able to get to the inside of his defender and make a catch. On that play, which featured four receivers and a running back, Tarvaris Jackson didn't have to worry about a linebacker or safety in Williams' zone off the snap - they were indisposed elsewhere leaving Williams side of the field mostly clear. In the second look, Williams simply ran a nice route that found the soft spot in the zone defense and Tarvaris hit him with a well-timed throw.

In part two, I worked backwards and took a look at the Seahawks' previous matchup with the Rams in Week 11 in St. Louis. In that game, the Seahawks actually went 4WR/5WR eight times, by far the most frequent use of the "00", "01", and "10" looks in the charting that we did. As we saw in Part I, the formations were mostly used on 3rd down and medium situations - spots where teams can expect a pass and the Seahawks did nothing to hide the fact they were indeed looking to throw the ball. In a 3rd and 8, play action is typically going to be kind of silly, as most defenses will be geared up to stop the pass, not the run. Let's take a look at a few more examples.

The Rams and Seahawks are tied at seven-apiece and the Hawks are looking to build a drive mid-second quarter after being gifted excellent field position (drive started at Rams 48 after a 41-yard punt and 7-yard return). The 3rd down play out of "10" personnel is designed for Golden Tate (slot left), whose defender will get 'picked' by Mike Williams running a slant and go. The idea here is to confuse and jumble the defense and Tarvaris can read and react to how they play it. 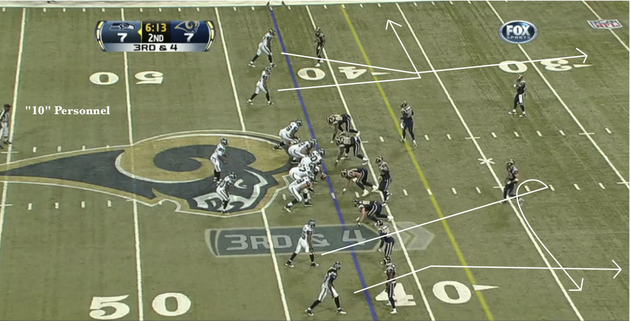 Ball is snapped, below. You can see Williams running his slant, and Golden is going to run an out-route just underneath Williams' cut upfield. The Rams actually play it really well - though I do like the basic design of the scheme. 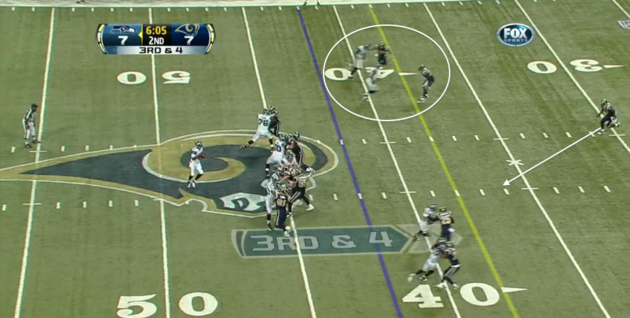 Below, you can see Jackson looking toward Golden and he's completely covered up by the Rams' DB. 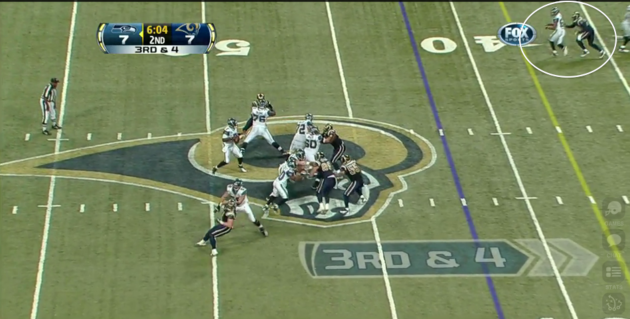 Jackson skates backward and starts looking to the right, and sees that Doug Baldwin has done a nice job rounding off his comeback route and is now running an out-route to the sideline. Jackson hits him in stride. It obviously helps in this instance to have Sidney Rice downfield keeping the attention of the defensive backs to his side. 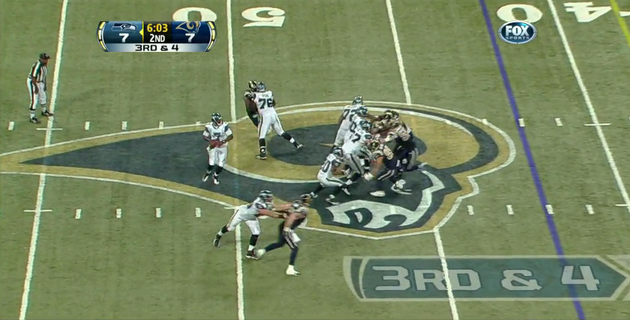 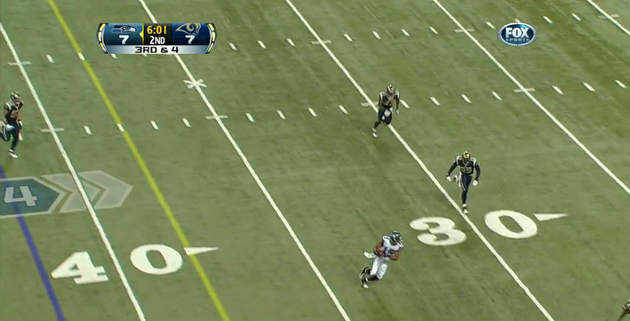 Unfortunately, the rest of the drive becomes a comedy of errors as the Seahawks begin moving backwards with a Russell Okung personal foul and a Tarvaris Jackson sack. The drive ends with a punt.

Below you can see the Seahawks are in a 3rd and 8 situation, backed up to their 8-yard line with 10:45 left in the 3rd quarter. This is a fairly important possession - their first of the 2nd half - as the Seahawks are looking to dictate their gameplan and maintain their lead.

Following two Marshawn Lynch runs (one for 4 yards, one for -2 yards) they roll out a 5WR look (no tight ends, no running backs), with Mike Williams out to the right, Golden Tate and Ben Obomanu split inside, and Doug Baldwin and Sidney Rice out left. You can see the routes each player will run. 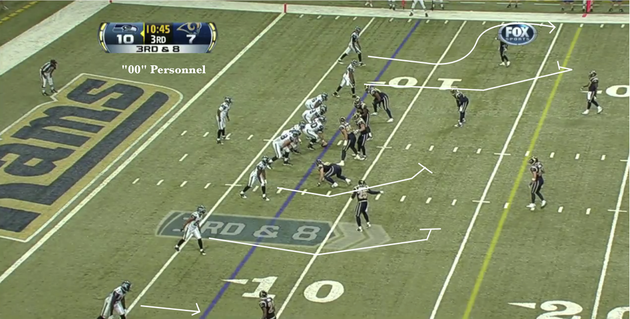 On this play, you'll see the Rams weakside linebacker stick with Doug Baldwin at the snap. Sidney Rice's wheel route has taken his defender out toward the sideline a bit, which leaves a nice gap for Baldwin to plant and stop. 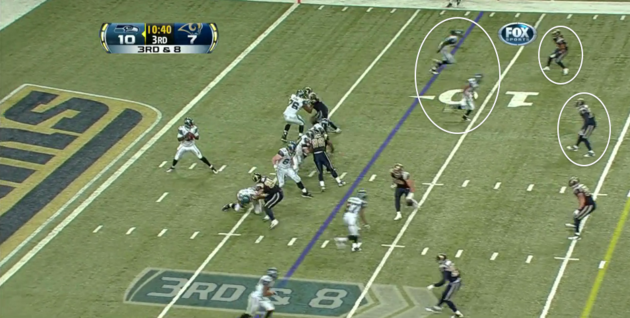 Tarvaris Jackson snaps a quick pass to Baldwin as he makes his stop, and the Rams two defenders to that side aren't quick enough to take away the passing lane.

It's a quick play that requires timing on the part of TJack - something he didn't always show a propensity for but in this case, delivered on. Baldwin makes the catch, falls forward, and picks up the first down.

The Seahawks follow up this first down with two more Marshawn Lynch runs - first for 2, second for 3, to set themselves up for another 3rd and medium situation. They again roll out the 5WR look, as seen below. On the play, Mike Williams (bottom, right wing) runs a seven yard slant and Tarvaris leads him too much. The pass falls incomplete in front of a diving BMW. The video flashes to Tarvaris Jackson, who is motioning at Williams in frustration to, apparently, run a crisper or sharper slant. Either way, it's evident the two weren't on the same page. Punt. 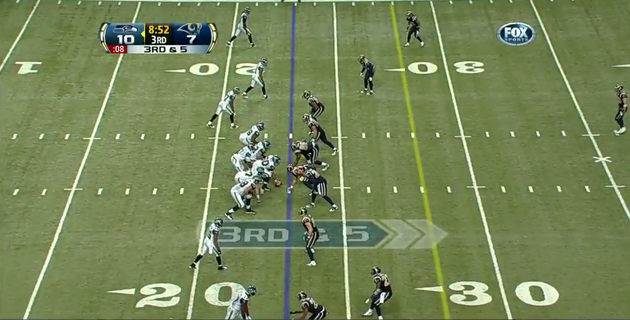 The next play I only include because it's a different look than most of the 4-wide sets I saw in my game reply study. The Hawks are in their "10" personnel grouping with Justin Forsett the lone-back, and of note are the greatly reduced splits for the four wide receivers and the fact that Jackson is up under center and not in the shotgun.

I've drawn out the routes that will be run, and though I won't break down the play completely, Ben Obomanu finds himself open on his stop-route from the left slot. A quick throw from Jackson would have been easy money but Tarvaris hesitates, tucks and tries to scramble his way to the first down. Unsuccessfully.

It's unclear which receiver was Jackson's first read (though he appears to be looking toward Obomanu), and that makes it tough to know exactly what went wrong on this play - with the obvious caveat being that he might not have even seen Obo. But, it is this type of hesitation to throw into tight windows that is the cold water thrown on some of the other bang-bang plays I've broken down in this series, and an example of one of the main criticisms levied on Jackson. 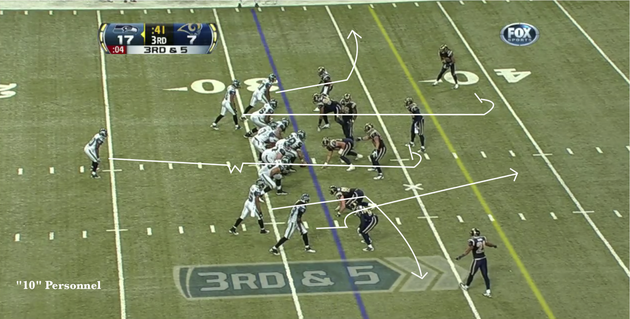