Seattle Seahawks: The Playbook from 2009 That I Somehow Acquired!

Share All sharing options for: Seattle Seahawks: The Playbook from 2009 That I Somehow Acquired!

Man, I sure do get a lot of inside information as a writer for FieldGulls, the number one blog on the internet, all genres. Bigger than Perez Hilton. Bigger than every other SBNation site put together. Bigger than the Oprah Winfrey Newtork, although to be fair, Gardening with Ciscoe sometimes beats out OWN.

On the surface, sure, we are just a blog about the Seattle Seahakws,Seahawks (so sorry) a team that has never won a championship and is the furthest city from any other NFL city, but none of that has kept FieldGulls from being the premier www.internet.com web page for coverage of the greatest team in the world. And every so often we can transcend simply being a "Seahawks" blog and also become a blog that welcomes people from all walks of life:

NFL fans non-affiliated with the Seahawks

USC fans because of our extensive coverage of the great and powerful Pete Carroll.

Fans of the hit show Dynasty.

Fans that are looking for something new to do now that Desperate Housewives is off the air, something that I thought had happened six years ago.

My blog Kenneth Author has a strong following in Australia and Israel. I don't know why that is, but I'm sure I can convert some of the Israelis into Seahawks fans and that's good news for everybody involved.

As the absolute number one website on the web, over a million spots higher than www.Google.com, FieldGulls has transcended everything. In fact, are you following @FieldGulls so that our twitter account can have more followers than every other SBN twitter account? Must be some kind of mistake you guys, because Niners Nation has like 9000 followers. The message you're sending me is that the Niners fans are better than the Seahawks fans. Is that the message I'm getting? Let's show everyone why Hollywood hunk and leading-man Ryan Gosling said, "Hey girl, you look like you need help getting to the world's best internet page. Let Ryan type in FieldGulls.com for you."

@Fieldgulls needs to have 5,000 followers by mid-summer, when the weather's so hot that your underwear recedes so deep into your buttocks that the only way to get sweet relief from this uncomfortable situation is to take out your iPhone, Android, or Sidekick device and bring up FieldGulls mobile. By reading the wonderful words, analysis, and sexual tension between myself and every other male member on this site (where the female commenters at though for real? Am I just tripping, as they say? Bring your wives up in here! I ain't never gonna get a girlfriend, so I'm out.) but by reading this site on the daily, you're swamp ass will feel like it's a million miles away.

Oh, and why the f aren't you following me on Twitter? I'm trying to surpass some of my boys on there and show supreme dominance and I just feel stuck right now. Do you know how hard it is to get respect from friends, let alone a father? The other day I went up to a homeless person and spoke to him for a few minutes. He was mostly just speaking gibberish, something about the day that the red lion will come out of the top of moon and devour his children like tiny ants.

And my response to him was, "What does respect feel like?" because I knew this man had more than I do.

Well, maybe today is the day that I finally get respect. Don't ask me how I did it, but I have managed to get my hands on top secret information regarding the 2009 Seattle Seahawks season and this even includes tips and tricks on how to beat every team in the NFL.

All of the playbooks... take a look after the jump... this is real. 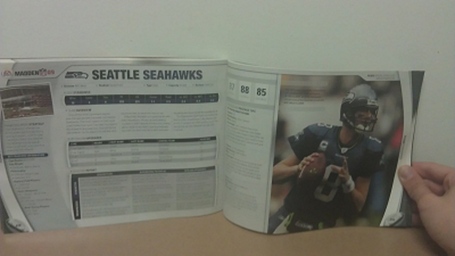 Wow, I bet you doubters feel pretty foolish now, huh? Look at what we have here and this is only the beginning. Enemies have outlined the Seahawks 2009 roster just as they see fit, looking for strengths and weaknesses. A book like this is surely what caused the demise of the 2009 season. 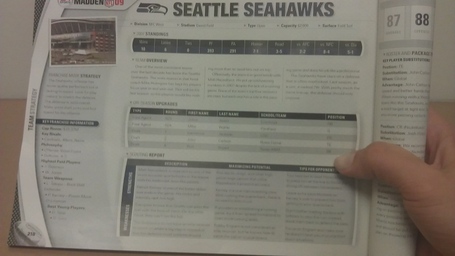 Let's take a closer look, shall we. Pretty interesting.... 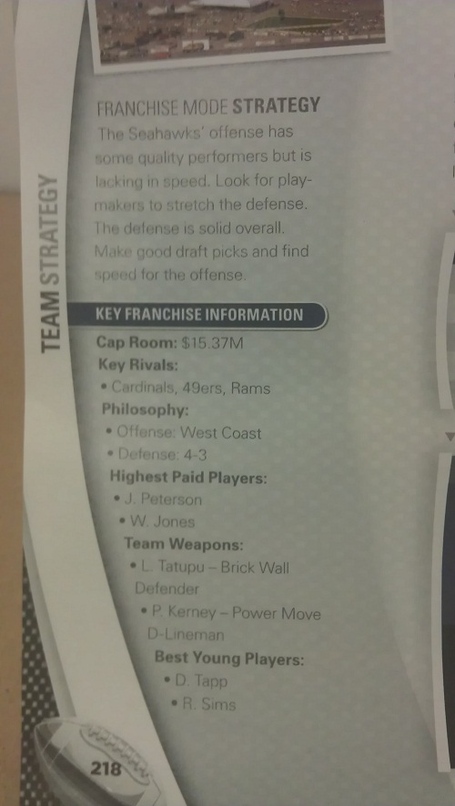 Man, brings me back to the good old days. Can't help but wonder if this strategy book helped defeat the careers of "Brick Wall" Lofa Tatupu and "Power Move" Patrick Kerney. Even our best young players, Darryl Tapp and Rob Sims, are gone and mostly forgotten.

Next, these men, whoever these men are that created this unbelievably detailed strategy and playbook, perfectly describe Seattle's strengths and weaknesses: 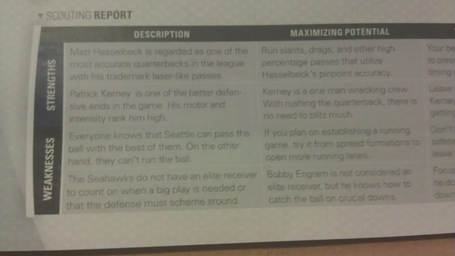 Strengths are Matt Hasselbeck and Patrick Kerney on either side of the ball. Weaknesses: Julius Jones and no elite wide receivers. Nate Burleson and T.J. Houshmandzadeh were our top two receivers this season. Nobody feared Jones, Burleson, or Houshmandzadeh and they didn't really make them pay for it. The three players combined for 10 touchdowns.

The "strengths" stayed relatively healthy all year but had passed their prime. Hasselbeck threw as many picks as he did TDs and Kerney managed five sacks. Probably because opposing teams knew where to attack based on this playbook strategy!

Finally, they basically had our entire offensive playbook! 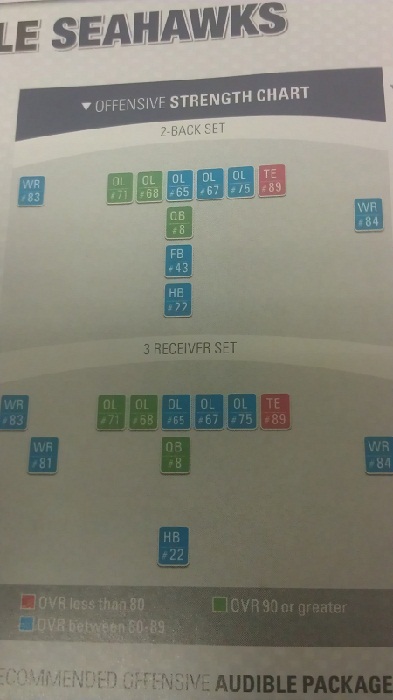 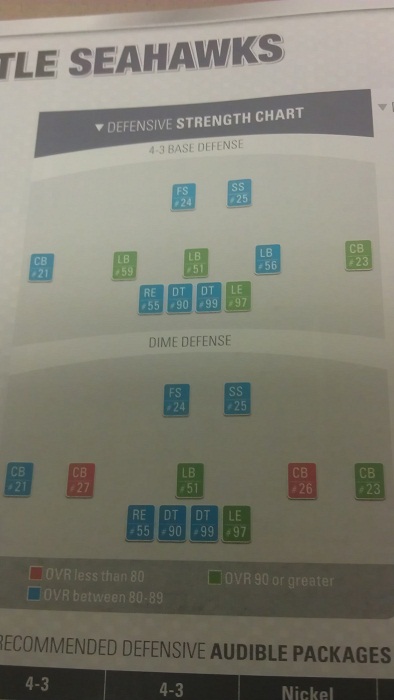 We were screwed from the get-go. They already knew about 4-3 BASE DEFENSE, DIME DEFENSE, 2 BACK SET, and 3 WR SET! Those were all of our plays and the opposing teams had them at their whim whenever they wanted. Jim Mora Mike Holmgren was like "Here you go, I am retiring anyway" and he gave it to John Madden, who gave it to everybody else.

Want to know what the Hawks were recommended for Audible Defensive Packages? Well here ya go brainiac! So silly and dumb for the Seahawks to give this information away. 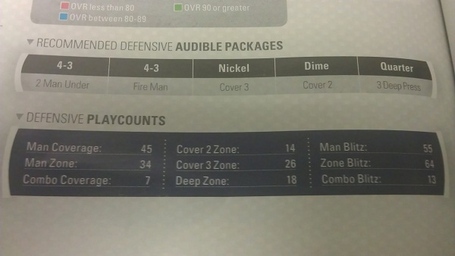 Better yet, not sure how to understand playbooks. They break it down for the NFL opponent layman so even a dummy like Jim Mora can understand it. Too bad Jim Mora was OUR coach. 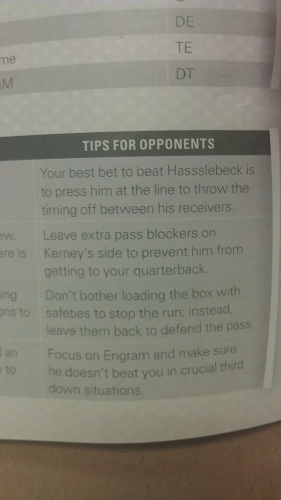 Oh gee thanks! Now everyone will now that it's pointless to put eight man in the box against Julius Jones! Thanks a lot Madden, Mora, and this entire conspiracy! They even gave away the names of the top plays and such, laid out for you! 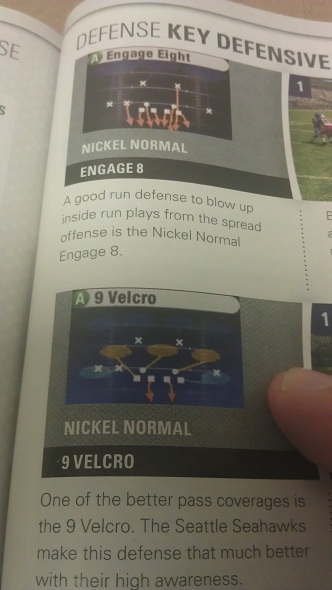 Watch out for that Engage 8 and 9 Velcro! Plays you'll be able to spot from a mile away now! 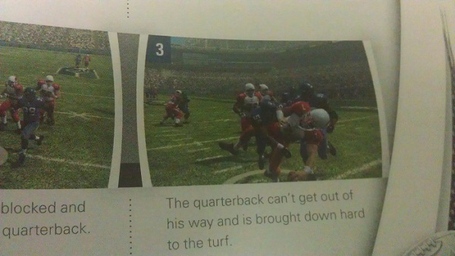 Well thanks a lot Madden. How could it be so easy for me to acquire all of this inside knowledge on the Seahawks and other NFL teams as well as how to beat them? Seems like a good reason as to why the Hawks went 5-11 that season. Just a boneheaded move and now my inside information has blown up a scandal that's been brewing for over 20 years.

This is bigger than Bounty Gate, SpyGate, WaterGate, Waterworld, The Gate starring Stephen Dorff, and BountySpyWaterGateDorffWorldGate put together. MaddenGate needs to stop!

Is the game even real anymore or have we tread into WWF (I don't recognize any name changes after I stopped watching wrestling) territory?

Thanks for listening, reading, spread the word, tell a friend, no tell 50 friends. If you don't have 50 friends, walk around the streets and give out free candy, tell them it's from FieldGulls. You pay for the candy though, we don't have time to be sending you money for candy. Get the bite size I guess, but people won't really pay attention unless you give them a full size bag of Peanut M&Ms.

Say something like "Hey, because I don't have any friends and I'd like to make some, here's a family size bag of Peanut M&M's, sponsored by number one internet page FieldGulls.com and follow on twitter @FieldGulls and also @KennethArthurS because they are my only two friends."

"But you took all the greens and green is my favorite!"

"But you're still going to eat em right?"