When the Seahawks went out and traded for Kellen Winslow I wasn't all that surprised. They've been looking for that type of player - a move tight end that can be used all over the formation to create mismatches with the defense and hide the scheme or run/pass predicability. The main question with Winslow though is whether or not he's still got the physical capabilities that made him a Pro Bowler in 2007 and a first round pick out of Miami back in 2004. Is he the right option? I don't know. People cite his production, and his numbers themselves are indisputable. 72 catches a year, on average, over the last six years. 4.9 catches a game, over the last six years. His consistency is actually pretty remarkable, especially considering the quarterbacks he's been paired with.

The major question and concern though revolves around his knee. After tearing his ACL in a motorcycle accident years ago, he's had to really work with the injury, week in and week out, managing pain, swelling, and bone-on-bone contact to keep himself healthy enough to play. My colleagues Thomas Beekers and Sander Philipse (BucsNation) note that Winslow is just not explosive anymore. A cursory glance at a sampling of games toward the end of last season will confirm this. He's slow off the line, slow in and out of his breaks, and the years of dealing with the knee injury appear to have eroded the explosive nature of his play. I would think the Seahawks are fully aware of this - Tom Cable noted, though, curiously in the same breath as pointing out Winslow's 'explosiveness,' that the former Brown and Buc has 'physical limitations.' Pete Carroll noted yesterday that 'He's been tremendously consistent in his play. We just have to really handle it right so that he can do it again.'

I did find myself a bit confused with both John Schneider and Tom Cable's specific use of the word 'explosiveness' when describing what Winslow brings to the table. My first impression when watching him play was more like "he'll be a possession receiver," and "can get you some first downs." "He'll be a nice outlet option underneath for our inexperienced quarterbacks because he can mask some things in the two tight end sets the Seahawks run." "A dumpoff option when the QB gets flushed from the pocket." -- That's what he was for Josh Freeman a lot of the time in 2011, and possibly interesting is the statistic I realized last night - with Kregg Lumpkin and Kellen Winslow, the Seahawks now have two players that represented 116 catches for the Bucs last year - about one-third of Freeman's total completions.

Maybe the use of 'explosiveness' is just coach/front office speak to generalize a skill position player rather than a guy that's just going to sit there and block. Whatever. I think Pete Carroll actually explained Winslow's perceived role more accurately when he said, "We think it's just a fantastic addition. Because he can make things happen, he can make plays, he should be a big factor on third down and in the red zone."

"He's a wide receiver in a tight end's body. He's got all that ability and route running, but more than that he makes plays. As well as, the thing I love about the guy the most is, he's a great competitor. He just loves to play the game. And we can't have enough of that around here."

He continued, "We like guys with special dimensions and he's got them. He's a real route-runner and a great, great catcher and he does stuff with the ball after he catches it, too."

No talk of explosiveness. No talk of stretching the field vertically. Tempered hyperbole, even from Carroll. I think the key is the way the Seahawks manage Winslow's knee issues and manage to keep him fresh. I went back and watched the Buc's Week 7 game against Chicago in London from last year. Maybe I'm just projecting my hopes a little too much, but Winslow looked markedly quicker and smoother off the line, in and out of breaks, than in the games I had watched before (weeks ~14, 15, 16), which makes sense. It was still early in the season and the rigors of travel and games maybe hadn't quite worn him down. Will playing a secondary role in the Seahawks offense, with significantly fewer snaps, make a difference? Hopefully. Carroll: "He's got some health issues that we're going to deal with to make sure that we monitor him really well, so that he can play his best."

Tom Cable described Winslow's role and ability to create mismatches when paired with Zach Miller on the field: "I think you have to make a decision as a defense now - do you want to play these guys in base defense? If you do, then you're going to have a linebacker covering those tight ends."

That's in general, and the theory is sound. Having Winslow in the huddle should elicit a quick decision or reaction on the part of the defense - who do we want to line up with this guy? A safety? A linebacker? Is he going to be split out to the wing? Is he going to be in the slot, on the line? These decisions can be exacerbated when Winslow goes in motion. The point is - the reason two tight end groupings are becoming more prevalent is because the two can be moved around, depending on specific situations, to exploit perceived mismatches. It's a game of chess for offensive and defensive coordinators, and the goal is to find ways to exploit weaknesses.

Said Kellen Winslow, yesterday: "You want to create mismatches, so I am kind of the knight in the chess game. You can move me around and control the middle of the field."

Tom Cable: "In terms of the "U" tight end, [Winslow] is certainly going to have some responsibility to block, but I think on a list of the top important things for him that's, on a list of five, fifth. He's going to be moving around, blocking on the move, but he's probably going to be more thought of as a playmaker, receiver type."

We're talking theories and hypotheticals - and I know that some people will scoff at the notion of Winslow doing these things. I know that there are many that don't have much optimism for this move and believe Winslow may not even make the roster. I can't tell you yay or nay on that - there are a lot of variables at play here but what I'm trying to do is put myself in the Seahawks' shoes. Why did they, apparently, have had their eyes on Winslow for some time? Why has Schneider been in Mark Dominik's ear about Winslow's availability for some time? What is it that they see in Winslow that they think they can really use in their offense?

Let's break down a play in the aforementioned Week 7 matchup with the Bears, in which the Bucs identified and exploited a mismatch in order to get some success.

Early fourth quarter, Bucs trailing big, 21-5. It's first and goal, and Tampa Bay trots out a '11' personnel grouping, three receivers to the left, and Kellen Winslow out right. The Bears have countered with a Cover-1 nickel look, three cornerbacks in man coverage to the left of the offensive formation - Tim Jennings, Charles Tillman, and D.J. Moore.

Safety Chris Harris is the lone zone safety in the secondary (hence, Cover-1), and Chris Conte in man coverage to the right side of the offensive formation on 6'4, 240 pound tight end, Kellen Winslow. Two linebackers will attempt to curb a run on first down. The offense takes a minute to survey the defense. 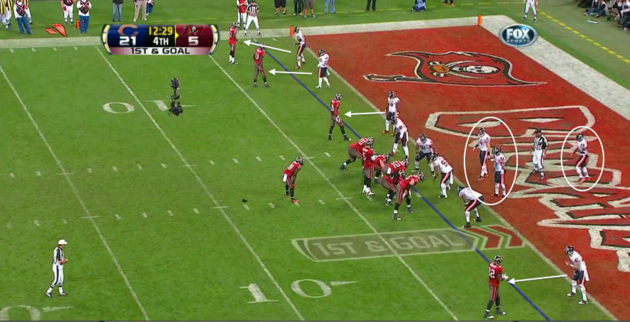 Below, note Winslow and Josh Freeman lock eyes. Winslow puts his hand to his helmet; either a dummy call or a message to Freeman that he's going to run the fade, back shoulder route. 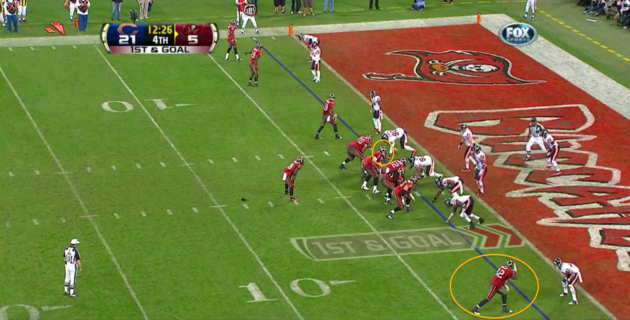 If I had to guess, I'd probably say it was indeed a quick check by Freeman to go to Winslow based on what the defense showed them. You've got a veteran, reliable pass catcher in Winslow matched up on an island against a rookie free safety, playing up on the line in press coverage against a tight end. Not his normal task, probably not his comfort zone even if he were a veteran.

Watch Winslow's route. Conte is playing inside shade to take away the quick slant. Winslow fakes like he's going inside then does a semi-swim move to get Conte's hands down and balance moving forward. 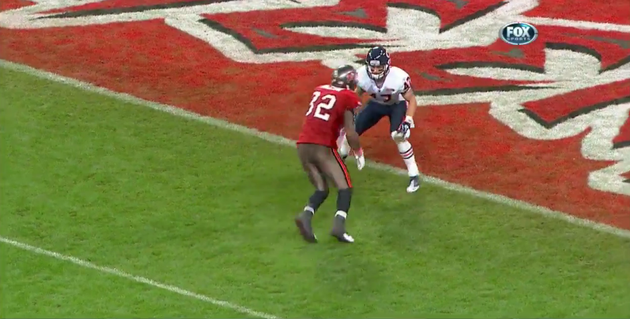 Below, you see Freeman looking toward Winslow, and most importantly, Conte has yet to turn his head. 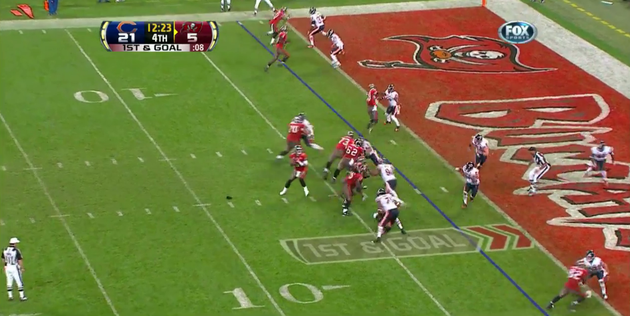 Ball is in the air now, and Winslow times his back-shoulder turn perfectly. It doesn't take explosiveness to execute this route, just body control and manipulation of the defensive back. 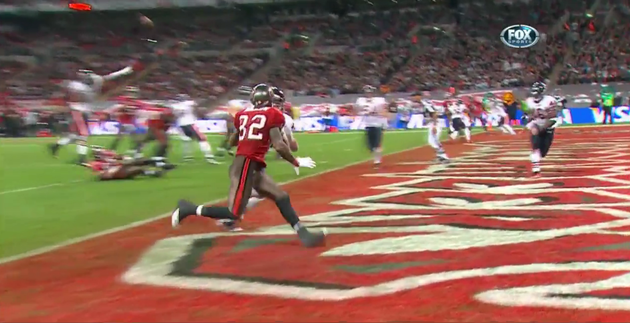 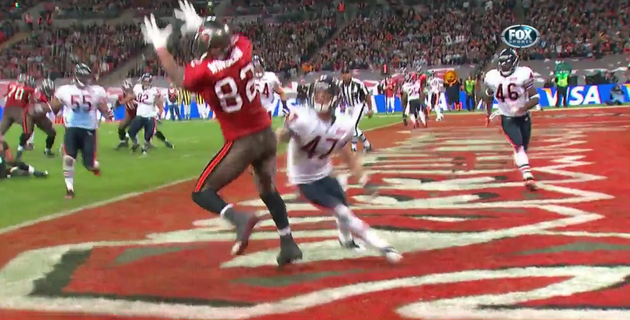 With Mike Williams likely to start the year on the PUP list (groan), having a player of Winslow's ilk actually does make some sense, strategically. I don't know if I trust Anthony McCoy, Cameron Morrah, or even Zach Miller on the outside one-on-one type of play. This is the type of matchup advantage that Mike Williams has on corners or smaller defensive backs - as I broke down last year - but outside of maybe Golden Tate or Sidney Rice, a guy like Winslow might actually be your best bet in this type of play.

It's a game of mismatches - if the Seahawks can figure out a way to utilize Winslow in the redzone like show above, I can see how he could be a weapon. I can see a role they see him in, the question still remains if he'll deliver.