On the Seahawks' Defensive Scheme Versatility/Diversity

"Our defense is a 4-3 scheme with 3-4 personnel. It's just utilizing the special talents of our guys." - Pete Carroll

Share All sharing options for: On the Seahawks' Defensive Scheme Versatility/Diversity

There's been a lot of talk the past two seasons about the Seahawks 'hybrid' 4-3 / 3-4 defense. Until just recently though, I'm not sure I'd seen the coaching staff so openly use the two terms when describing what they play. As Carroll said above, the basic base defense the Seahawks run is a 4-3, a descendant, through Pete Carroll, of the Monte Kiffin family of 4-3's. A base 4-3 is easy to discern - you have two speedy defensive ends, a gap penetrating 3-technique defensive tackle, and a squat, block-taking-on 1-technique defensive tackle on your defensive line. Behind them, you've got a rangy and instinctual middle linebacker that's capable of dropping back down the middle in pass coverage but big/tough enough to shed blocks and make plays on the run.

The weakside linebacker is typically very quick and flows to the football, racking up tackles and flying around. The strongside backer lines up with the tight end and is stout against the run, plays contain, but able to fall back into pass defense. That's the basic seven man front of a 4-3 - and I'm really just generalizing so I'm sure there are a million nuances I just skipped over. That's not meant for this article - I really just want to try and break down what the Seahawks have done and will do.

The hard part about that though is that the Seahawks have done and will do lot of different things. They adapt, evolve, and change throughout the year and throughout a game. As Carroll recently acknowledged (above), they run a 4-3 with 3-4 personnel. That's why Alan Branch, the Seahawks' 3-tech, is not a gap penetrator. He's more like a 3-4 defensive end or a nose tackle. That's why Red Bryant isn't a speed 'jet' end, flying off the edge like a bat out of hades. No, he's more like a 3-4 defensive end, a '5-technique', taking on two gaps and playing the run. Chris Clemons isn't a prototypical defensive end, and some of the Seahawks' linebackers are a little bit miscast in the traditional 4-3. K.J. Wright, or example, was best projected into a 3-4 defense as an outside linebacker out of Mississippi State. He's long - 6'4, and maybe a bit heavy at 246 for the rangy, athletic 'flow to the football' type of guys you'd expect to see.

The Seahawks drafted Bruce Irvin (6'3, 245), Bobby Wagner (6-0, 241) and Korey Toomer (6'2, 235) in this year's draft. When Brock Huard asked him whether they look for 3-4 outside linebackers or 4-3 guys when they do their evaluations going into the Draft, Seahawks defensive coordinator Gus Bradley responded:

"I think it's a unique combination that we're looking for. In the 3-4, the linebackers are big, physical type guys; the guards are going to come right at them and they have got to be stout enough to take on the guard. Then, the 4-3, you want speed. The Lance Briggses, the Derrick Brookses, the guys that can really move well, lateral movement, and those guys are always protected. Well, we do both. Instead of maybe the 260 pound linebackers, or the 225 pound guys, we like that guy that's 240 and can run a high 4.4. So, we're getting that hybrid that can do both. That's what we're really trying to be looking for. But, we try not to put them in too many positions where they're taking on the guard, so we're probably leaning more towards the 4-3 principles."

"The great thing about Bobby is that we do feel that he can play all three linebacker positions. When we evaluated Bobby, we watched just his block protection, getting off blocks, because that's really important, especially on the inside, and we felt like among the linebackers, he really showed up there. It was a need area for us with the loss of David Hawthorne, we really felt like we needed an inside linebacker type."

Back to K.J. Wright.

"On K.J. Wright - we took him, and a lot of people were asking, "well, where are you going to play him? Is he a MIKE, is he a WILL, is he a SAM?" Well, we tried him at SAM. And then we thought, well, let's give him some reps at MIKE and see how he does. And, he played multiple positions in college, and we trained him that way, and that's a credit to coach Norton, he's really trained all our guys to play all three positions."

"We really developed this defense so you can play multiple positions - It's not as advanced as maybe some 3-4 teams and maybe not as advanced as some 4-3 teams, but, we can do both. And, that's where I think we create some issues for offenses. They look and say, "gah, we can't put in our 3-4 plan, or our 4-3 plan, because they do both, and it might limit some of the things they do."

This commentary by Bradley pretty much echoes some things that Leroy Hill talked about with John Clayton on Saturday. When Clayton asked Hill about the difference between Pete Carroll's defense and the schemes they ran under Jim L. Mora, Hill replied:

"When I sit back and study the (Pete Carroll) defense, it's almost like a hybrid 3-4. When you stand the LEO - which is Clem - into a two-point stance, it's almost a 3-4, if people look at it like that. If you look at the starting lineup from last year - the body types, you have a Red Bryant at defensive end, and the other defensive end is Chris Clemons, you have a 6'4 corner and a 6'3 corner, you have Earl at safety with speed and the other safety (Kam) is huge and hits. The different body types create a lot of problems. A lot of speed, a lot of long, rangy bodies, but I love playing in that scheme - it's one of the funnest schemes I've ever played in."

Hill then hit on some things that we've been talking about here lately, the importance of the defensive sub-package guys, the 10-15 snap players that Greg Cosell championed, noting, "The later you go in the draft the more holes, limitations, flaws a player has. Success becomes a function of how he's utilized. In era of sub-packages a lot of players contribute, even if they play 12-15 snaps per game. Often the key is finding/defining a role."

Said Hill - "Whatever defense you run, you're going to have some kind of hole somewhere. If you're big and beefy, somehow someway you'll probably give it up in the pass, so you have to have a different corps of guys to come in and play and adjust to whichever team you're playing."

I haven't watched every other team in the NFL closely enough - though I have followed Kenny's lead and am in the process of watching every game from last year during this slow time in the offseason - but I haven't watched every team close enough to really know how often they roll out subpackages and different looks. I do know that the Seahawks are variable in their approach, and change things up year-to-year and game-to-game.

One of their most used subpackages was the "Bandit", which I revisited a couple of weeks ago here. Here's the problem with reading those articles though - there's no telling if that's what they'll run with in 2012. In 2011, they went from the 4-3 Under to a 4-3 Under/4-3 Over hybrid and eschewed the Bandit for Base/Nickel personnel almost entirely the whole time. Let's revisit, using some stills. 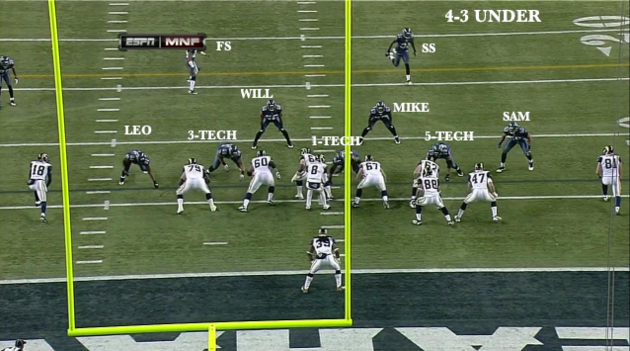 As you can see, Chris Clemons is aligned in his wide-9 look, off the weakside tackle. Branch is the 3-tech, Mebane the 1-tech, and Red Bryant is at 5-tech, shaded off the right tackle. Here, K.J. Wright is the SAM, up on the line on the outside of the tight end, and you can see Leroy Hill as the WILL, lined up in front of the weakside A-gap, and David Hawthorne, lined up in the strong side B-gap. Nothing exotic here.

Next, you can see the main variation of this scheme, the "Jet Ends" look, with Raheem Brock subbed in for Red Bryant. 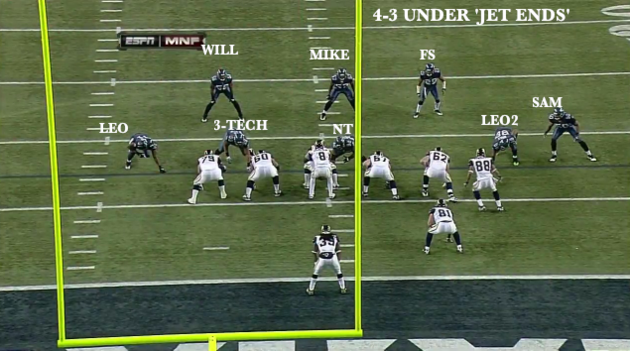 The main differences here are the gap controls. Clemons and Brock, LEO1 and LEO2, are both in their wide-9 alignments, and K.J. Wright is out to the strong side, up near the line, playing contain. Earl Thomas has crept in to watch the strongside B-gap, and that has Hawthorne and Hill slide over a tad, mirroring Mebane and Branch. An interesting look, with the obvious goal of getting more pressure on Sam Bradford (here).

Next, let's take a look at something the Seahawks started doing more of in 2011, the 4-3 Over. The main difference between the Over and Under front is that in the Under front, the defensive line is shifted to the weak side of the offense, as you can see above. In an Over front, the d-line is shifted to the strong side of the opposing offensive line. It's easiest to just watch Alan Branch, because his positioning gives away the alignment. 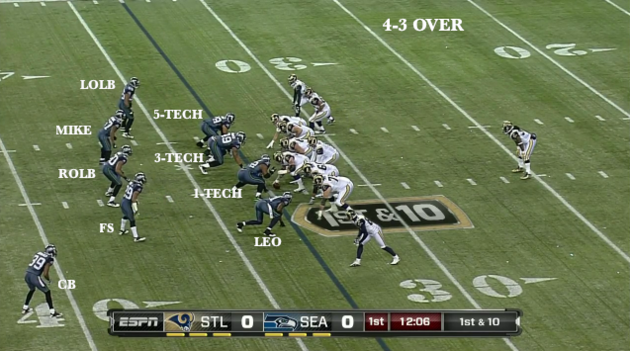 Below, you can see the difference. The gaps aren't as easy to discern above, but basically, the alignments have shifted towards the strong side of the offense, with the 3-tech switching to the strong side B-gap. The other thing to note in over front looks, is that weakside linebacker and strongside linebacker distinctions can be thrown out the window. In this case, K.J. Wright becomes the right outside linebacker, and Leroy Hill becomes the left outside linebacker. This is one reason the designations 'WILL' and 'SAM' for Hill and Wright became a bit muddled last year, and why I'm sure they'll get muddled going forward with Korey Toomer as well. 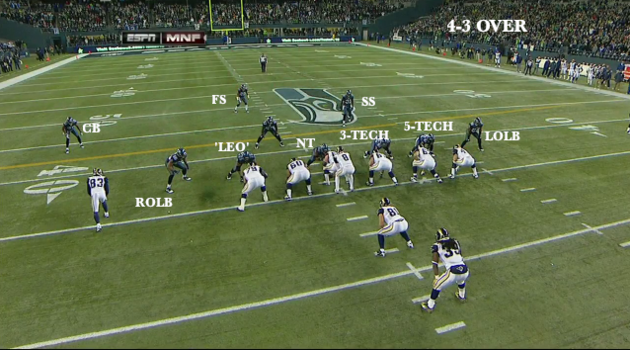 Above, both Wright and Hill are closer up to the line. The LEO is no longer technically a LEO in this look because Clemons is lined up heads-up on the weakside tackle, but that's not a huge deal. Same goes for Mebane, who is heads-up on the center, in 0-tech alignment. Just another wrinkle to watch for.

Now, here's where people start talking about the 3-4. Below, against the Eagles, the Seahawks used this look fairly often throughout the game. You can see that Clemons and Wright are lined up in two-point stances up on the line in what looks very much like a 3-4. Big-bodied Branch, Mebane and Bryant are stuffing up the middle, with Hill and Hawthorne patrolling behind them. 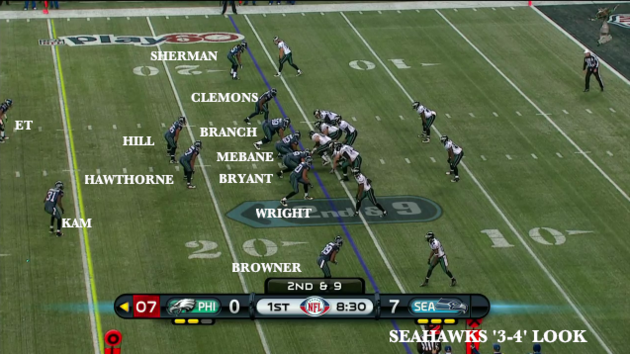 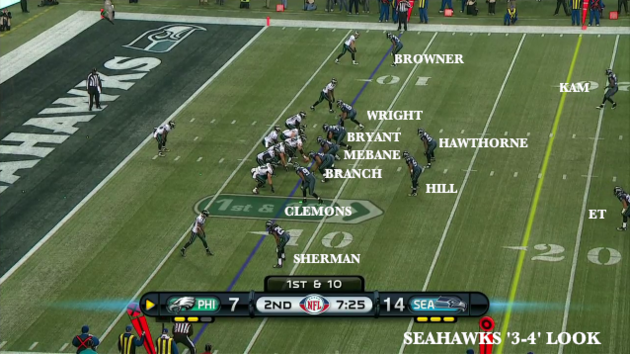 This isn't something you saw every week with a ton of frequency, but it's why Bradley talks about how teams must prepare for the Seahawks as both a 3-4 and a 4-3 - because they have tendencies for both. In essence, the Seahawks are a 4-3 team - it's what Pete Carroll has run for the past couple decades and I really don't know if he's willing to just switch to a pure 4-3. That said, Carroll has shown a willingness to get creative with his players and talent available, and show some exotic looks to confuse and disorient the offense. Because of this, I'm looking forward to 2012 to see what Carroll, Brandley and company have in mind with their shiny new toys in Bruce Irvin, Bobby Wagner, Korey Toomer, Jason Jones, Winston Guy, and others.

So - as per usual, no conclusion - just some musings.