The Seahawks' QB Competition: A Battle Of Wits. With Myself.

Share All sharing options for: The Seahawks' QB Competition: A Battle Of Wits. With Myself.

Mike Sando posted some stats the other day that presented the pass distribution by the left, right, and middle of the field for Tarvaris Jackson last season, and it illustrated something that Thomas had previously brought up here - namely that Jackson does not use the whole field in the passing game very well. Beekers noted in his game-tape study that "Matt Flynn absolutely uses all of the field. Tarvaris Jackson? Well, here's where [the Seahawks] rank in attempts to different parts of the field: short left 27th, deep left 24th, short middle 30th, deep middle 15th, short right 6th, deep right 4th." Beekers logical conclusion, one that I happen to agree with: "That makes you so much easier to defend against."

In the Sando piece, the Mike Williams connection, and his lack of production/separation, is examined, but I didn't really feel that any conclusions were drawn. Sando notes that "Williams caught 10-of-14 passes for 113 yards after lining up wide to the left. He caught 8-of-17 passes for 123 yards (one touchdown) when lined up wide to the right. Those figures reflect where Williams lined up before the snap, according to ESPN Stats & Information. These reflect where he caught passes: 10 on the left side of the field, eight on the right and none over the middle."

I agree with Mike that there is always plenty of blame to go around when it comes to problems with the offense, and though Tarvaris' percentages roughly line up with those of Aaron Rodgers, I don't really think it's something we can ignore. Jackson is not Aaron Rodgers, nor does he get Aaron Rodgers-esque results. Mike Williams does not appear to be the issue here. It seems clear to me that Tarvaris Jackson heavily favors the right side of the field - maybe he sees that side better, and because he lacks the decisiveness, arm strength, accuracy and talent that Rodgers possesses, he doesn't have the same effectiveness. Tarvaris' penchant to throw to the right could be an important determining factor (maybe the most important determining factor) in the current quarterback battle taking place between he and Matt Flynn (for the sake of sanity, we'll just assume Russell Wilson is a distant third, though he probably isn't), so it's worth looking at.

When you look at the reports out of Mini-Camps, the results are kind of what you'd expect. Tarvaris, almost invariably among beat writers and reporters that have seen the practices, 'is who we think/thought he is'. That is, he flashes brilliant arm strength at times and can make wow throws to take the top off a defense, but is still inconsistent and indecisive at other times.

The reports out of camp on Matt Flynn are sort of the opposite. He doesn't make wow throws, doesn't really scare secondaries with his deep touch, and isn't overly impressive, but is exceedingly accurate and efficient in the short to intermediate range. Eric Williams on Flynn: "Flynn took the majority of the first unit snaps on Wednesday. And the LSU product did a nice job of working the middle of the field and taking what the defense gave him. Tights ends Kellen Winslow, Zach Miller, Cameron Morrah and other inside receivers benefited from Flynn's ability to drop the ball over the second level of the defense and in front of the safeties. Flynn also connected with Doug Baldwin on a deep pass during team drills."

Dave Boling on Flynn: "Flynn identifies his target, anticipates the opening, and gets the ball into the receiver's catching-window with great regularity. His timing and accuracy make him look like a quarterback who can move the sticks, and be a very nice fit in the Hawks' run-balanced offense."

Even Ron Jaworski weighed in on Matt Flynn, citing his games against Detroit and New England, and offered pretty much the same assessment that Thomas had. "What I saw was a timing and rhythm passer who's decisive with his reads and his throws," said Jaws. "He was consistently accurate in the short to intermediate areas. He displayed a nice feel in the pocket with some subtle movements, like this slight shoulder roll to manipulate the coverage."

"Flynn also showed the ability to get out of the pocket and throw on the run. But the more throws I watched, the more his arm strength limitations were evident. The fade is not an arm-strength throw. It's more of a touch throw. In fact, I was concerned that his few deep balls lost energy at the back end. They had a tendency to die."

Jaws went on. "I believe Flynn can be a successful NFL starter. I'm reminded of Bill Walsh and his strong belief that a good coach manipulates the play of his quarterback with his play concepts and his play-calling. That will have to be the case with Flynn in Seattle."

All these reports only confirm what we basically already figured. They also validate something that I've said all along as well - Matt Flynn and Tarvaris Jackson are polar opposites as quarterbacks, which makes this ongoing quarterback battle all the more mysterious and annoying. The first question I have been asking myself is - "what type of quarterback do the Seahawks even want?" Or, maybe more accurately, - "Do the Seahawks have a preference on a strong-armed, vertical quarterback, or would they prefer a west-coast, precision thrower in the mid range with a lack of arm strength deep?"

I tend to lean toward the former - their offense is heavily predicated upon the run, used to set up play-action and downfield, explosive pass plays. As Greg Cosell would say (paraphrasing), even in an age of the NFL where you can get by with a quarterback that lacks an elite arm, at the end of day any team needs to generate explosive plays downfield, simply because it's really freaking hard to put together 10-13 play drives, multiple times a game. Defenses are just too good. I believe Pete Carroll strongly subscribes to this, as does John Schneider. it's why they brought in Charlie Whitehurst, the beautifully-coifed backup in San Diego that had been schooled in Norv Turners Air Coryell offense for the past few years and whose main (and turns out, only) quality as a quarterback was a strong arm.

Still, a balance is needed, and when a quarterback's skill is skewed one way or another, it will leave something to be desired. That's why we are where we are with Matt Flynn and Tarvaris Jackson. Jackson is who we thought he is, - perhaps, maybe, a little bit better than we thought he is, but at the end of the day the Seahawks did sign Matt Flynn and draft Russell Wilson so they're obviously not completely sold on their incumbent starter and his skillset. Complicating matters is the fact that Matt Flynn is an entirely different brand of QB - one that will spread the field, distribute the ball efficiently, in theory, but doesn't have as strong of an arm and thus is more limited in the types of downfield throws he'll be asked to make. Complicating even further is that Flynn has very little gametape to go off of and is more or less an unknown quantity. Complicating things even further is that Tarvaris Jackson is historically very, very impressive in preseason games and in practice oh my god my head just exploded I hate quarterback competitions. Good god where am I going with this.

Let's back up. I was talking about using all the field as a quarterback. That was the point I was getting at, I think. I forgot there for a second. So - looking at Sando's table that compared a sampling of quarterbacks and the distribution of their throws... 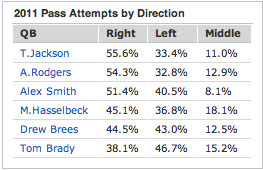 As you can see, -- apart from Aaron Rodgers- - Alex Smith, Drew Brees and Tom Brady do a much better job of using the whole field in the passing game. Matt Hasselbeck is maybe the most proficient of the group at hitting every part, and uses the middle of the field very well. Not surprisingly, Matt Flynn is often compared to Matt Hasselbeck and this ability to use the middle of the field and spread the ball around to each side is likely a big reason why the comparison is made.

So - conclusions. Tarvaris Jackson has a better downfield arm just based off the eye test, but is a see-it-throw-it quarterback that doesn't anticipate well and isnt' all that accurate. He can do the play-action stuff well but isn't the type to consistently move the chains and matriculate downfield. Matt Flynn is a rhythm quarterback, great accuracy, leads receivers well, uses the width of the field well and works the middle, underneath the safeties. But, he throws ducks on anything past 20 yards.

It's not a battle of two quarterbacks, it's a battle of two offensive identities!!!! Which one will win? Do you know? Do the Seahawks know? No one knows!! I know what it means!! Russell Wilson will be your starting quarterback in 2012!! HHAHAHAHAHA, mmmuuuuhhHAHAHA. NEVER GO IN AGAINST A SICILIAN WHEN DEATH IS ON THE LINE! MAHAHAHAHAHA.