Share All sharing options for: Kenny Watches All 256 Games: Seahawks at Giants

The Seahawks played the Giants in week five in New York in the morning, so many of us put a "L" in the books before the game started. Seattle wasn't playing that well to start the season, so why would we win an East coast game that we never seem to win?

Well, Seattle ended up pulling it off in excellent fashion. I'm just going to get started. I'm only recapping one game today.

Seattle gets the ball first and has the ball at their 20 to start the game. They sort of drive down the field hitting spots you wouldn't expect them to hit, perhaps using the element of surprise in this case by hitting Marshawn Lynch lined up waaaay to the left for a big early gain and hitting not-as-oftenly-used Ben Obomanu three times, including the early touchdown for a 7-0 lead. Sidney Rice had one first down catch and Zach Miller was targeted (and hit hard for a penalty) but this was a lot of Tarvaris Jackson and Obomanu to start the game. Though Lynch and Miller had to leave the field with trainers, the drive was a major success. 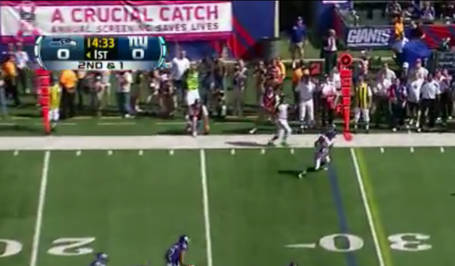 It's week five and Marcus Trufant is now out. Something I had forgotten was that Walter Thurmond was now the starter, not Richard Sherman yet.

Giants driving and Jake Ballard gains about 30 yards, wide open for a catch. TE defense was a major struggle this year and something to love for improvement on in 2012. Next play, Ballard scores the TD to make it 7-7.

Seattle's second drive isn't as successful, going down after a Tarvaris sack on a third-and-long following a James Carpenter false start. However, the no huddle seems to be working really well as long as they can keep it moving fluidly and consistently. Penalties will kill the rhythm though.

Tides turn early though. Giants have a chance to swing momentum hard but Chris Clemons strips Eli Manning and the Hawks have the ball deep in NYG territory.

Oops, Lynch fumbles it back to New York :(

Thurmond, it should be noted, with some solid coverage of Mario Manningham early.

This is what I was talking about earlier: 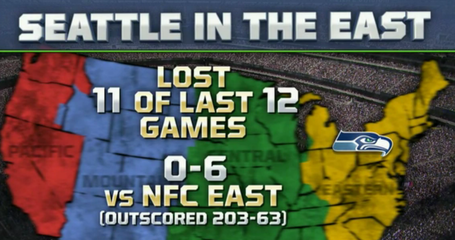 Lynch rectifies his fumble. After the Giants punt it to their own 48, Lynch takes the next carry to the half-yard line. Beast Mode punches it in, no problem. 14-7.

The Seattle defense forces the Giants to punt again. Need I remind anyone that the Giants won the Super Bowl and that Eli Manning had his first good season? 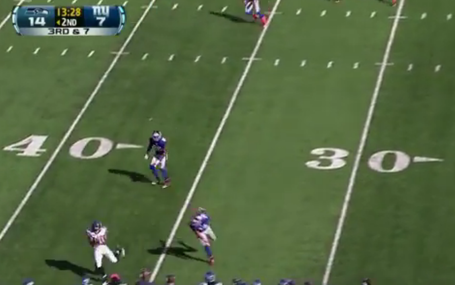 On the very next play he hits Baldwin again and the Hawks go from their own 37 to the Giants 38.

Robinson fumbles it at the Giants 3. UGH! So typical for the Hawks to blow a game like this.

Clemons having a monster first half, sacks Eli on the two.

Eli throws a butterfly to Earl Thomas and despite how often the Hawks seem to want to give it away, so do the Giants and Seattle isn't paying for it's mistakes. Now T-Jack throws it up to Aaron Ross, who is not a Seahawks receiver.

Hakeem Nicks shows up, makes a nice one-handed falling catch to make it 14-14 seconds before halftime. I'd be pissed if I didn't know how this ended.

Second half and neither offense can find a rhythm, both defensive lines playing with intensity, and exchanging of the punts. Nine minutes to go in the third and Jackson gets hurt. Hello Charlie Whitehurst.

Charlie Whitehurst is a "gunslinger" in the way that he throws in such a way that I imagine a person in the Old West would throw a football, since they have never even heard of football. 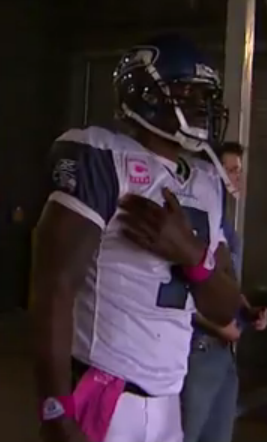 Just a great game for the Seahawks defensive line. Alan Branch has a sack, Clemons is blowing it up, and Anthony Hargrove slides right through for a safety. 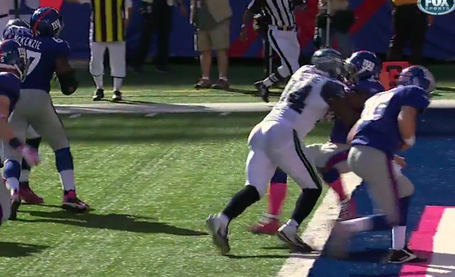 Steven Hauschka #NailedIt from 51-yards and the score is now 19-14 in the fourth.

Of course, nobody will ever forget this play. It was the "Jesus. Just Jesus. Of course. WHY US?! WHY ALWAYS LIKE THIS" moment. 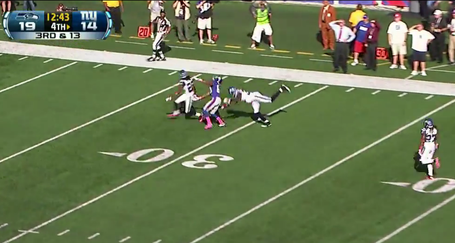 Eli just hurls it into double coverage of Victor Cruz and Kam Chancellor manages to tip the ball but it goes high in the air and then into the hands of Cruz who jogs it in for a 68-yard TD. The two-point conversion makes it 22-19 with 12:37 left to go in the game, on the road, in New York, with Charlie Whiteworst (or his MAD Magazine-type name, Charlie Blightblurst) as the QB.

However, Cruz fumbles on his own 25-yard-line (the sixth TO of the game I believe for both teams) and the Hawks get the ball in Giants territory. Hauschka ties it at 22 with 10 minutes left.

Coming up on four minutes left in the game and the Hawks trail 25-22 and need Whitehurst to drive them to the promised land and glory unlike we usually ever get to see.

Incredibly, with 2:37 left, Baldwin (who has been making plays all day and should not be ignored) is left wide open for a touchdown from Whitehurst to make it 29-25. The corners got mixed up when Baldwin and Williams (I think? My video just got fuzzy) converge and Williams stops completely while Baldwin bursts free and clear for the touchdown with nobody else within 15 yards of sight.

Cruz is a major reason that the Giants get down to the Seattle 5 with less than a minute and a half remaining. Again, this is where we expect to lose it in a heartbreak. However, the heartbreak would belong to the big apple after Brandon Browner takes a tipped pass 95 yards for a touchdown and the deal is sealed. Amazing.

This was a very important game for the team for a lot of reasons. But some of which:

- A breakout of sorts for Doug Baldwin. He was already the leading receiver, but this was a prove-it game in an important situation and Baldwin excelled, showing that he could be an elite slot receiver now that Sidney Rice was healthy. He was a stud in this game.

- A great game for the defensive line as they were active and frustrating for the Giants offensive line all game long.

- An important time to overcome injuries to Jackson and Marcus Trufant and say, "We can do this without those guys." Seattle showed themselves that you can win even when things aren't going your way and certainly with all of the turnovers and the injury to Jackson, the Seahawks very young roster had to grow up really quick and learned along the way that they weren't going to lose this game just because "they were supposed to" or just because "bad shit keeps happening" or just because "we are Seattle." They ignored or didn't know any of those things so they just played hard and played like a team that expected to win. It's the kind of momentum you hope that they can keep going for a long time.

Certainly, that didn't happen exactly because Seattle lost their next three games, but they broke the East coast curse and they found out that they could win a tough game like this if they bought into the coaching staff, etc. For a young team, this was a great win and won't be soon forgotten.

Games Remaining: Uhh, I have to go count again.