Seahawks Sent Off To Summer Camp and Send Home Pictures

Share All sharing options for: Seahawks Sent Off To Summer Camp and Send Home Pictures

I am having so much fun at camp this year. Everybody has been really nice. Camp Director "Petey" has been super cool and let's us play all day, as long as we get our work done. He says that if we compete tough to win, then everybody is a winner. Except for the losers, I guess.

I've made a lot of new friends this year. Bobby, Bruce, Jason, Russell, Matt, Robert, Kellen... I think we are all going to become bros. Or brahs. We haven't decided yet. But I think we'll be brobrahs for a long time. I now forgive you for sending me to an all-boys camp, because these dudes are awesome.

Camp counselor Tom has been super cool, he's my favorite counselor and I sometimes don't know why counselor Darrell is his boss sometimes. Counselor Bradley is the best though, I think he'll be a camp director one day.

Yesterday we played capture the flag and it was a lot of fun but it could have gone better. We kept yelling at Tarvaris to get rid of the flag when he was about to be tackled but he just seemed to hold onto it forever. Then sometimes Russell would grab the flag but if he tried to toss it to a teammate, he could only throw it three feet above the ground. The other new guy Matt would throw the flag to a teammate but it would only get halfway there and drop. We gave LeRoy the flag and he just rolled it up and wandered into the woods with a lighter. We wanted Deuce to play but it was 3 PM, which meant he was still eating lunch. I kept throwing the flag to Brandon but all he did was throw his arms up in the air and say "ARE YOU KIDDING ME?" because that's what he does when he sees a flag, despite how obvious the flags appearance should be to him. I threw the flag to Sidney but when he caught it his arm shattered into a million pieces, and it wasn't even the arm he used to catch the flag. Carp was called for like seven holding penalties, which wasn't even a penalty in the game until Carp started playing.

Otherwise, it was a lot of fun.

Anyways, I wanted to share some pictures of the fun time I am having. You see, ahem, there are certain pictures that we are allowed to share and then we can't share any other pictures anymore. In the past, I could grab pictures from anywhere and we'd have a jolly old time, but now we can't do that so I am sharing the pictures that we can share. Since camp 2012 is only going to be relevant for so long, here are the pictures that I will share with you so that I've gotten use out of all of the pictures I can: 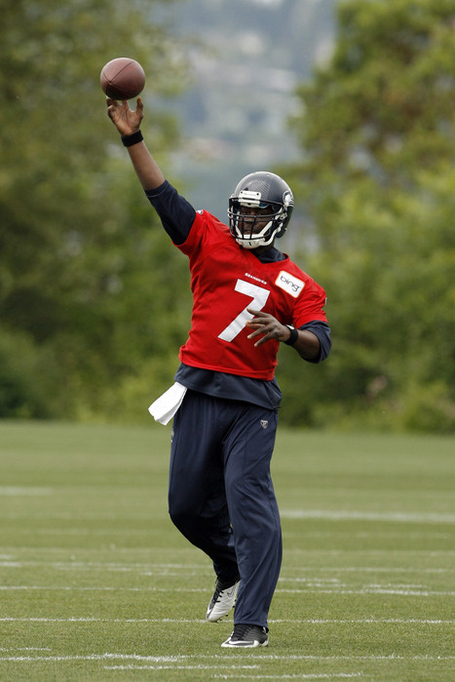 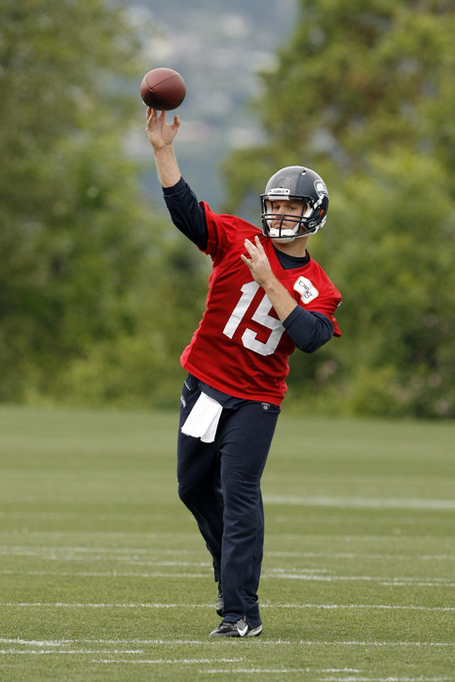 I bet some of you read that line above and thought, "TARVARIS JACKSON RELEASED?! WOOHOO!" but no. I said "Tarvaris Jackson's release" to signify the release point he was showing during this picture of OTAs. Right below it is Matt Flynn's. I don't know how relevant this is to where they are now or what they are going to show in a game, but this is what I have to work with.

You'll notice that the ball is almost exactly at the same point in these two pictures, so we can assume that this is the exact moment of release for both quarterbacks, so it's fair to compare. It's fair to say that Flynn's arm is bent a bit more than Jackson's, which is basically straight. It's fair to say that Flynn is brushing his shoulder off while Jackson keeps his left arm down. It also would appear that the back right leg of Jackson is significantly higher up than Flynn's with his hips perhaps opened up more.

These particular pictures that I can use are from May 30th, which is basically a month ago. How much have they tweaked with Flynn since then, if at all?

As for Jackson, I had a hard time finding just the right pic to compare this one to from the season but here are a couple: 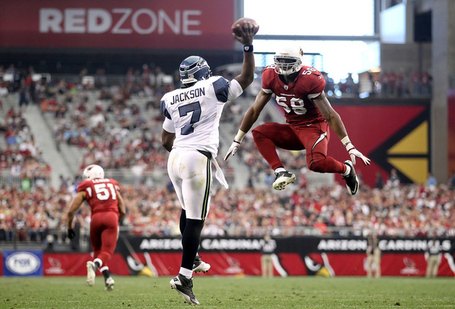 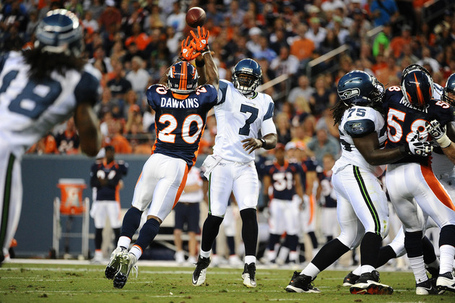 He has pressure in his face both times but that first picture was just too much fun to not use. Jackson likes to keep that left arm down and release high, but it appears that his foot is much higher in the OTA picture than this second picture against Brian Dawkins. Which would probably mean nothing, like angle or the fact that it's one picture from OTA, but could they tweak a thing here or two with Tarvaris?

Meanwhile, this gameday picture of Matt Flynn versus the Lions looks like a guy that's about to throw a football into a tire swing from 25 feet away with extra bonus points for velocity: 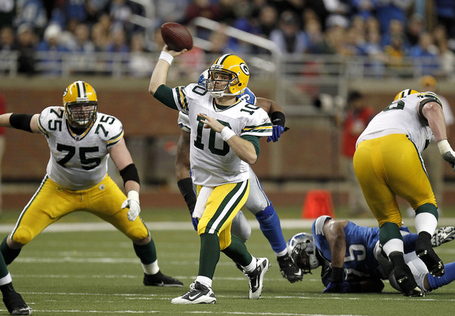 Like he's about to take the football by the honches and hump it into submission. This would not appear to me to be great form but I'm sure that Flynn made a quick adjustment to his throw because of the situation presented to him. It really looks like he's putting 110% into this throw though, which isn't necessarily a good thing. His typical throw would look more casual, like the one above from OTAs. 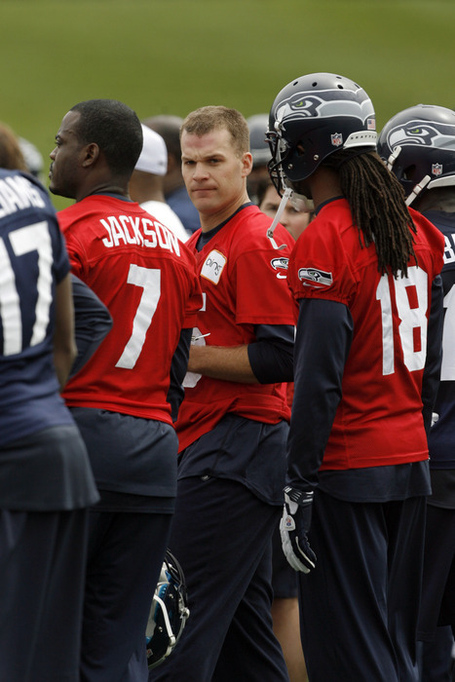 Here is Russell Wilson in his audition for So You Think You Can Dance: 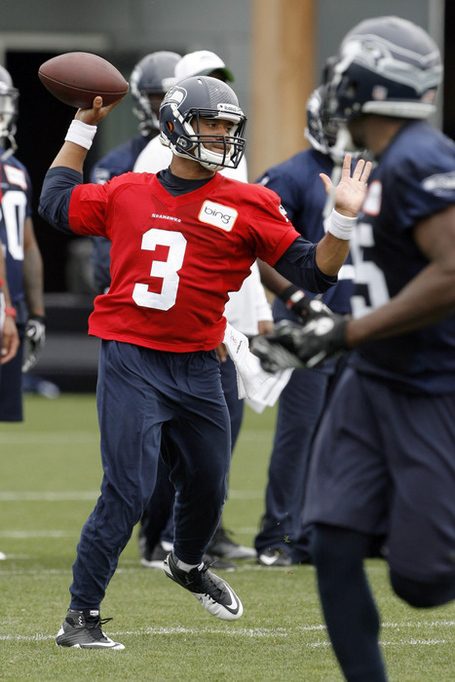 Here is the most important aspect of the Seahawks QB job: 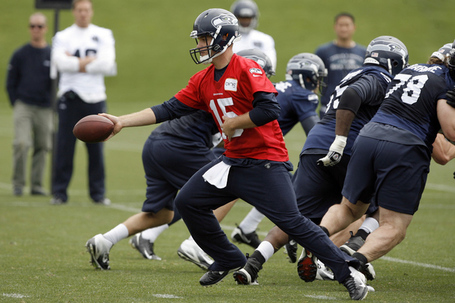 Here is Pete Carroll so pumped up and enthusiastic about his job that he's literally saying "WAY TO GO!" to helmets: 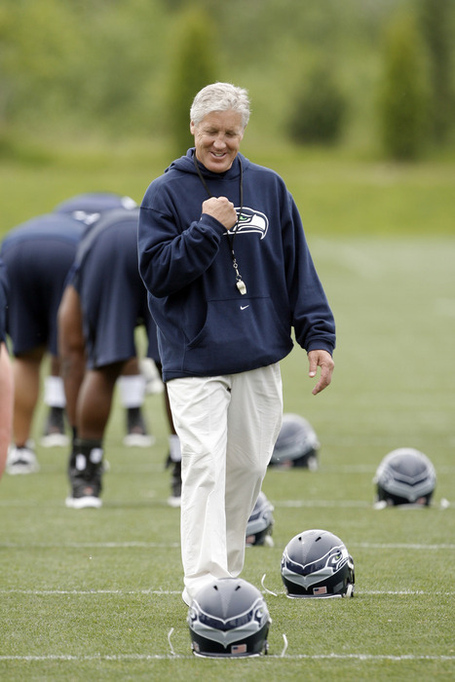 Here's a guy that we can't sleep on this year, a guy who will perhaps be one of the unsung heroes of Seattle's 2012 season and that we haven't talked about much: 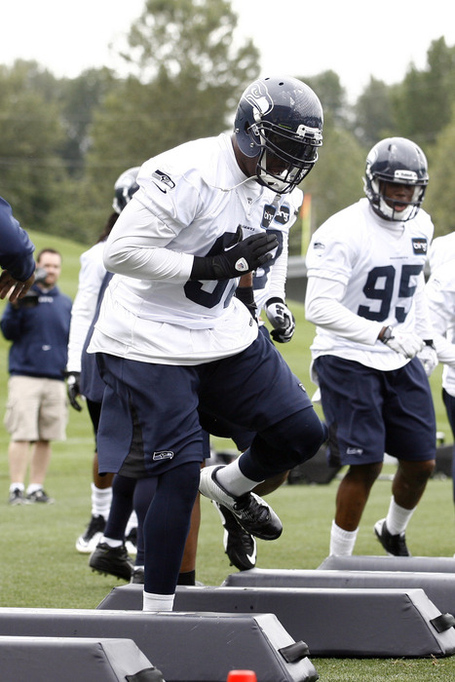 That's Jason Jones showing those pads the business. The Seahawks may have not been the biggest spenders in free agency, but they might have gotten some of the best deals with Jones and Flynn. The risk is small but given the right opportunity, both of these guys could be huge players in 2012. 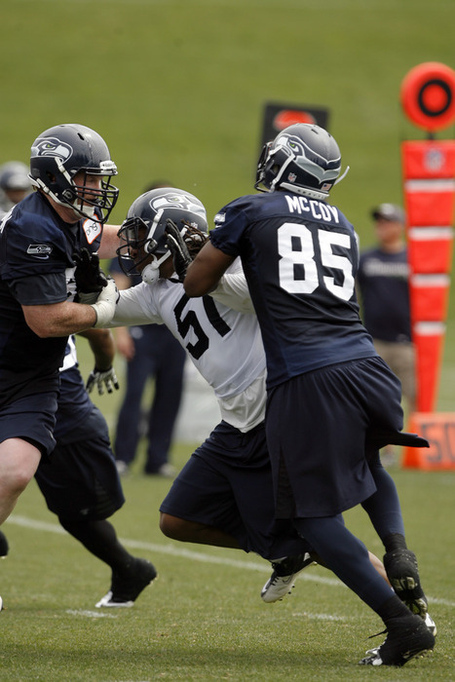 That's Bruce Irvin trying to fight through a double-team. Whether or not he wins the battle isn't as consequential as it would just be nice to have another guy that warrants a double-team. 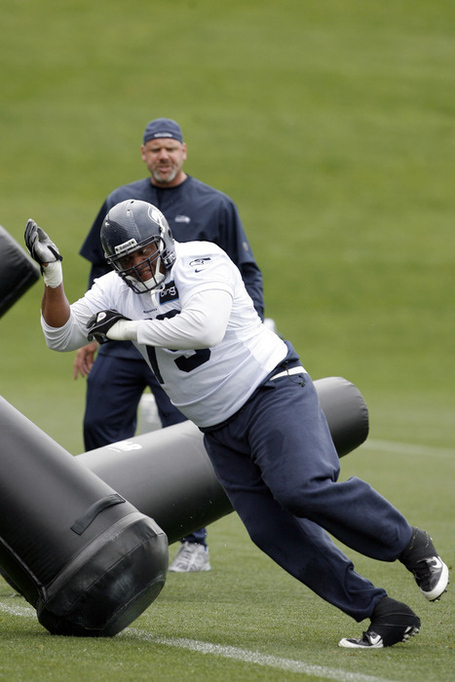 The only reason that I am posting this picture is because I like it. It's got everything. Discuss.

So that's how my summer vacation is going, mama y papa.

Send chocolate. Also, I got poison ivy on my junk.