Share All sharing options for: Seahawks Scheme Analysis: Using Play-Action Out of "13" Personnel

Picking up again with the series examining personnel groupings, tendencies, and some strategies, I wanted to take a quick look at a couple of plays out of the Seahawks "13" personnel - one running back and three tight ends. If you missed the earlier analyses, head back and check out my look at "22" personnel - PART I, PART II, and PART III - and have a look at my take on 'spread' formations - HERE and HERE.

In all honesty, I turned on the Seahawks Week 17 matchup with Arizona with no real idea what I was looking for, but a couple plays out of the '13' personnel, in particular, stood out to me. The Hawks used a heavy dose of play action in their 23-20 loss that week - and with the addition of Kellen Winslow this offseason I can see the Seahawks upping the ante there going forward as they potentially increase their usage of multiple tight end sets. Depending on who emerges from the tight end group as TE3, there are quite a few things the Seahawks can do with these 'heavy' sets - power runs, seam passes, dumpoffs - the versatility and run/pass disguising from this grouping is what makes it effective.

Below, I've broken down a couple plays out of the same initial look, one pass and one run.

One of the things that you'll hear the Seahawks' coaching staff talk about when it comes to their dedication to the run, Marshawn Lynch, and the acquisition of Kellen Winslow, is that teams began to stack the box with seven, eight and even nine defenders to counter their success there at the end of the season last year. Below is a nice example on a second down, with the Seahawks backed up into their own end.

Below, you can see that for all intents and purposes there are nine defenders loaded up to stop the run. That leaves Deon Butler on an island on the wing with a deep safety patrolling the middle of the field. The Seahawks just run it anyway. This is where Marshawn Lynch proves his worth. Below you see Seattle in a three tight end set, Cameron Morrah, Anthony McCoy set back off the line, Zach Miller in-line, and Marshawn Lynch in the backfield. 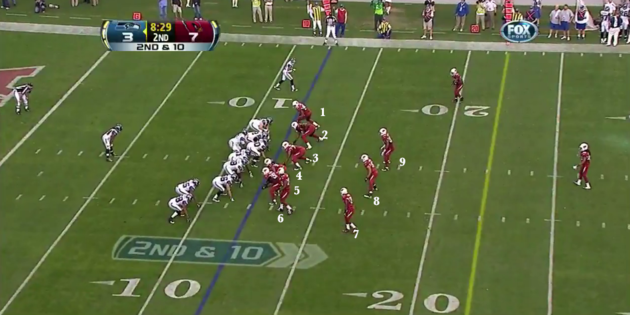 The ball is snapped. Lemuel Jeanpierre, starting at RG for an injured John Moffitt, pulls left, followed closely by both Anthony McCoy and Cameron Morrah. 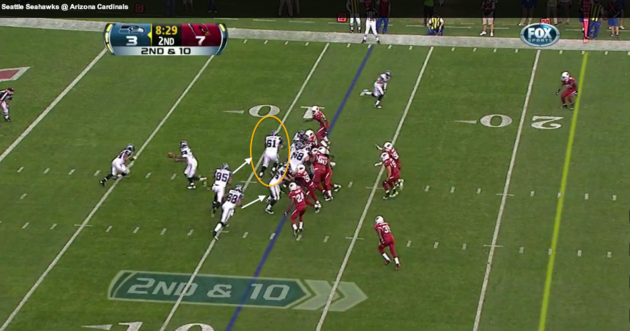 The Cardinals read it well - Jeanpierre attacks the OLB to the left, and McCoy is charged with lead blocking through the hole. 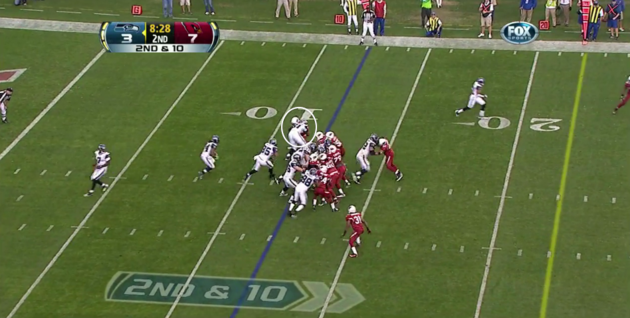 The play doesn't really look like it's going to go anywhere. The Cards play it well enough with their nine men in the box. Below, you can see that Lynch has broken off up a seam that has emerged in what looks to give him a yard or two before he runs into a pile. 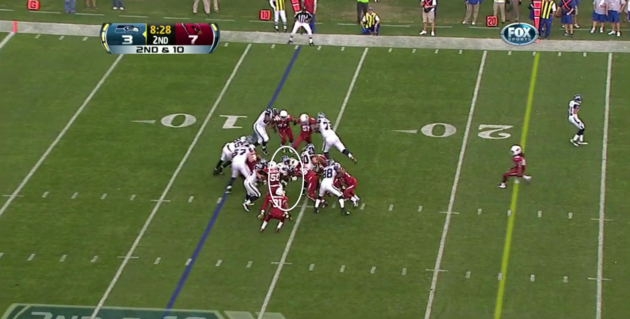 In typical Lynch fashion though, he keeps his feet churning and with the help of a few pile-moving offensive linemen, grabs an additional five or six yards. This has got to be demoralizing for the defense. 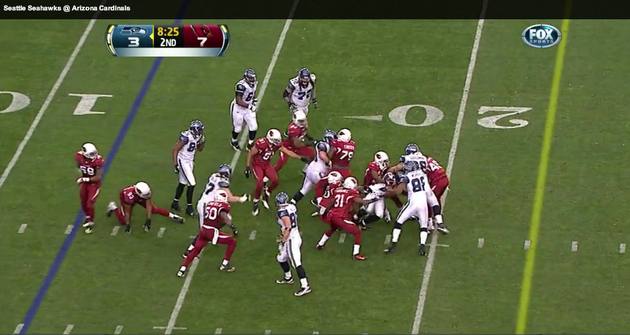 Fast forward a few minutes and possessions and you can find the Seahawks in a similar situation, down and distance.

The play actually doesn't even count due to a hold by Paul McQuistan, but it works for the study of strategy and execution, for the most part (apart from the hold, obviously). Seahawks lined up in exactly the same set and the Cardinals respond again with an 8- or 9-man look for their front.

Morrah, McCoy, and Miller set right, with Deon Butler out on the wing left. Lynch the lone back.

Ball is snapped. McCoy pulls left, which grabs the attention of the right DE. The play action works fairly well here - you can see several defenders moving toward the line of scrimmage. 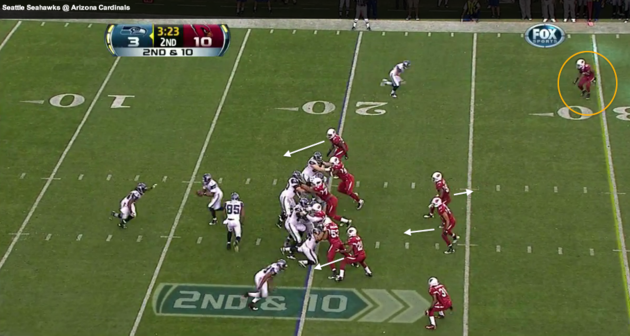 Below, you can see the Cardinals defense recognize the play-action but now it's much too late. Deon Butler is already ten yards deep and one in a one-on-one situation with the cornerback. He'll sink down and comeback toward the sideline after getting a little deeper to his side. The play action has effectively created a big enough cushion in that deep zone by sucking the DE to that side in toward the line of scrimmage right off the bat. You'll see him try to adjust but he cannot react quickly enough. 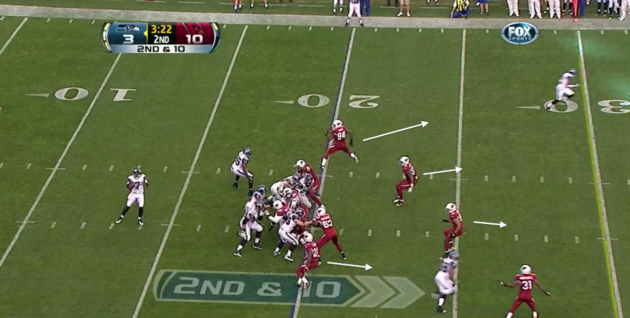 Above, you'll see Morrah running up the seam, which should grab the attention of the middle third safety. Below, you'll see LT Paul McQuistan blow his block and then egregiously hold his man.

Turns out McQuistan didn't even need to grab his defender's ankle, as Tarvaris locks and loads and throws a deep out to Butler, who has done a great job of getting separation on the sideline. I should note this is a pretty tough throw - the deep comeback - and the quarterback must put a lot of zip on it to avoid a turnover. 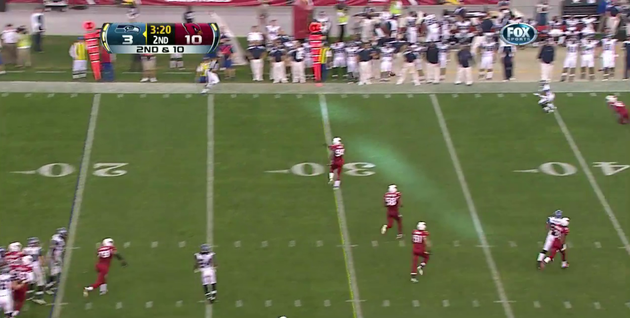 Ball is complete. Play doesn't count. The use of play action is clear though.