One of the most overlooked aspects in evaluating wide receivers is that player's downfield blocking abilities. We talk about their catch radius, speed, hands, route-running - all that, and frequently. At times, in passing, we'll talk about a nice block so-and-so laid to spring whoever, but for the most part it's an ancillary subject. I'm guilty of this - I rarely watch receivers during run plays and only go back to watch if they either screw up on something downfield or get called for a hold.

This skill in downfield blocking by a receiver becomes even more important for a team as dedicated to running the football as the Seahawks are, and it's one thing that I've endeavored to study a little harder of late. Now, as awful as the Seahawks are in the screen game, especially with their running backs, they actually had a little bit of success with quick swing-passes to receivers in the slot or outside in 2011, two examples of which I've decided to break down in more detail. Let's start with Week 16, where the Seahawks hosted the San Francisco 49ers and lost a tough one 19-17. Early in the game - the Seahawks first drive in fact, Doug Baldwin scored on a 14-yard touchdown swing-pass that was set up a large part due to Golden Tate's excellent downfield blocking.

Below, you'll see the Seahawks in an interesting 6OL look with Breno Giacomini the de facto 2nd TE to the left, on the outside shoulder of LT Paul McQuistan. Golden Tate is on the outside left, Doug Baldwin in the slot, and Ben Obomanu out right. It's, 2nd and 2 - my guess is that the Niners are loading up to stop a run here by the Seahawks - they're in their base personnel with Parys Haralson at outside linebacker (as opposed to Aldon Smith)-, though I will say with a 2nd and 2, this is a nice spot to throw out of. 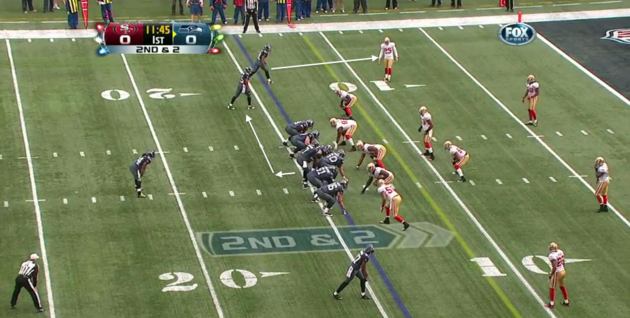 Ball is snapped. Below, you can see 49ers starting CB Tarell Brown matched up with Golden Tate on the outside and Pro Bowl S Dashon Goldson keeping his eye on Doug Baldwin. Tarvaris Jackson wastes no time in swinging a pass over to Baldwin in the slot. It's a terrible, high pass, but Baldwin reels it in. 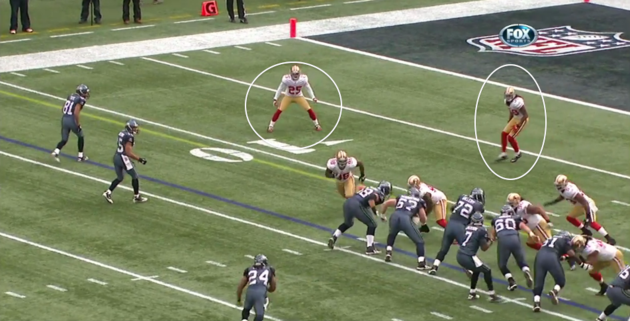 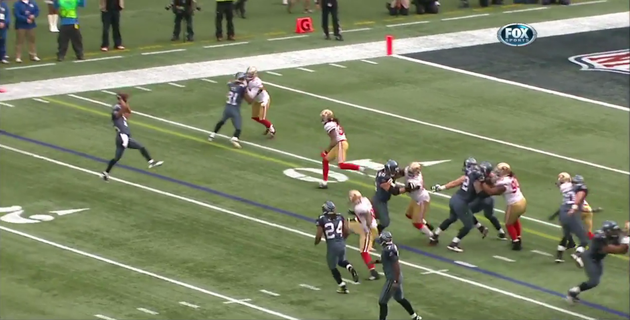 Above, you can see Tate start to work, starting at the ten yard line. You can also see Goldson come downhill in pursuit once he sees it's a quick pass to Baldwin. He overplays - or underestimates Baldwin's speed, and Doug runs right past him with a nice lateral move. Below, you can see Tate working Brown down the field methodically and under control. Watching it in real time is more impressive.

Brown finally gets off Tate's block at the four yard line or so, but he's now ten yards downfield and in a tougher position to make the play or force Baldwin back to the inside or out of bounds. 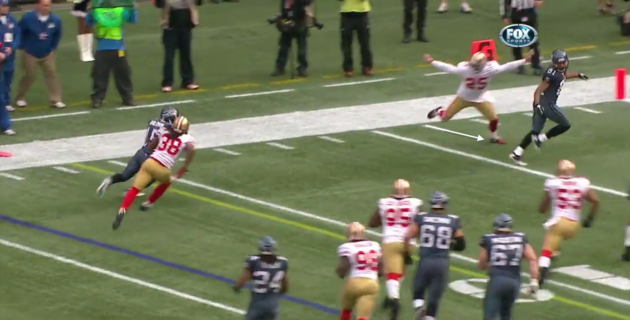 Strangely, Brown simply swipes at the ball and misses as Baldwin goes by and the Seahawks score. Not bad against a couple of good defensive players in a grudge match type of game. 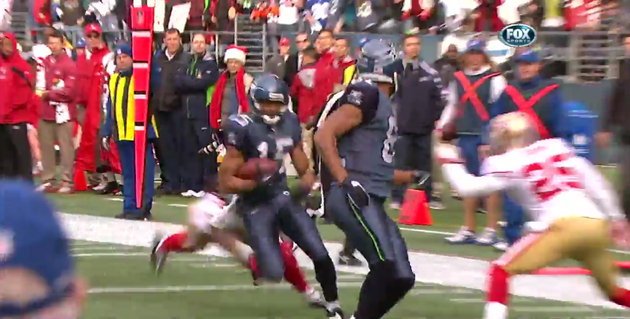 Now, this isnt' the only time Golden Tate's downfield blocking has helped a fellow receiver collect a touchdown and it reminded me of a very similar play from the Seahawks' Week 5 matchup with the Giants. Interestingly enough, the play I am going to break down below happened on the Seahawks' first drive and on a second down from a similar distance from the endzone.

I actually think I broke this play down during the season but I was too lazy to go find it. Either way, it's a textbook cut block by Golden Tate that springs Ben Obomanu for an 11-yard touchdown reception on a quick swing-pass. 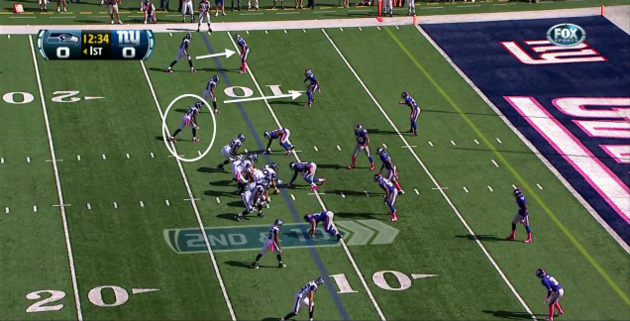 The ball is snapped. Tarvaris swings it out to Obomanu and you can see the reaction from the Giants defensive secondary - Deon Grant comes downhill to take on Obo and Antrel Rolle is Golden Tate's mark. Rice has cornerback Corey Webster's complete and total attention - you can see his eyes don't leave Rice until they're about 10 yards deep. 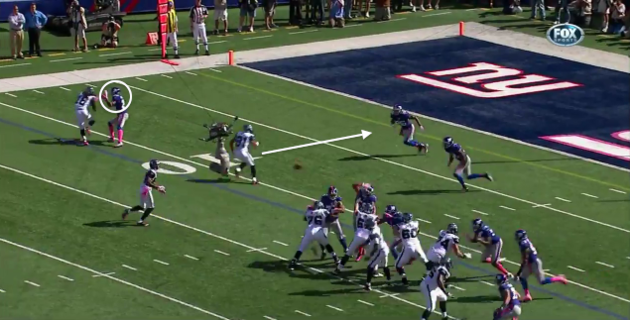 In high school and college, you are taught to cut block by head faking or tilting your head up to make it look like you're going to take on your adversary standing up, but then at the last second just take out his legs. Golden doesn't really head fake here but he delivers just a beautiful cut on Antrel Rolle.

Also importantly, Obomanu has a step on Grant to the edge. 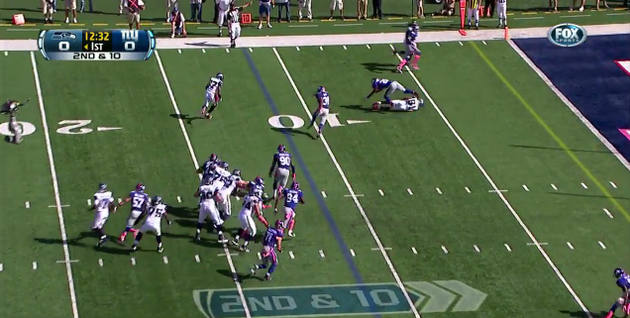 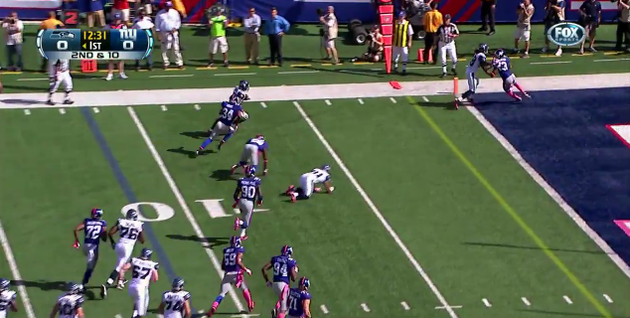 All in all, a couple of nice plays by Golden Tate (not to mention Doug Baldwin and Ben Obomanu), and these plays demonstrate why the Seahawks felt comfortable featuring the former Notre Dame star in a lot of their "22" sets as the lone receiver. He's effective downfield, is an aggressive and willing blocker, and can also run routes and catch passes too.

This year has the potential to be big for Tate if he can put some things together, and his downfield blocking ability gives him an edge in the battle for reps.