Seahawks' Roster Analysis: A Quick Glance at the 90-Man Roster

Share All sharing options for: Seahawks' Roster Analysis: A Quick Glance at the 90-Man Roster

It's the dead part of the offseason so I thought I'd get things kicked off by talking about the Seahawks roster - how it looks right now and how it may look by the end of the preseason. The Hawks can and are running with 90 players on their payroll right now, and that will have to be whittled down to 80 after the third preseason game, with the deadline being August 28th, I believe. Past that, the Seahawks will have until September 2nd to get down to 53 and that's when the really tough decisions will have to be made.

I've been keeping an updated roster spreadsheet because one, the online lists are hard to look at in toto, and two, I'm absurdly organized and I like to play around with depth charts and whatnot. I'll be breaking this down into individual posts but wanted to take a quick glimpse at both the offense and the defense, and talk about some of the areas of intrigue.

Pay no mind to the order of players - they're loosely penciled in, and not really indicative of how I believe the final depth charts will pan out. For those of you keeping track at home, the Seahawks currently employ 44 players on offense.

Now, the final roster numbers at each position are something we could argue about all day, and there are several schools of thought. Some think you should invest more spots on into the trenches - keeping 9 or 10 offensive linemen on the roster at all times. They're big men, they smash into each other a lot, there tends to be injuries, and you can't just throw anyone out there during a game.

Naturally, you only have five on the line, or six, at any given time, but keeping 9 or 10 offensive linemen eats into the skill position roster spot number. According to Eric Williams' roster analysis from early in May, the Hawks have kept an average of 9.5 offensive linemen on the initial 53-man roster over the last four seasons. So, you can probably bank on the final number settling on 9 or 10.

At QB, the Hawks will almost surely keep three. It's rare a team carries four quarterbacks and I just don't think the Seahawks will go that route. That means it's likely Tarvaris Jackson or Josh Portis on the bubble. I'm not even going to talk about this because we've beaten a dead horse as to what might happen here already.

In the backfield, my guess is that the Seahawks will run with four guys -- three running backs and a fullback. At receiver, you'll see five or six on the active roster, with that bubble spot probably waffling between keeping a fourth tight end or a sixth receiver. The Seahawks have mostly run with three tight ends over the last few seasons but with the way they have been talking about using tight ends, they could conceivably keep four.

The defense and specialists: 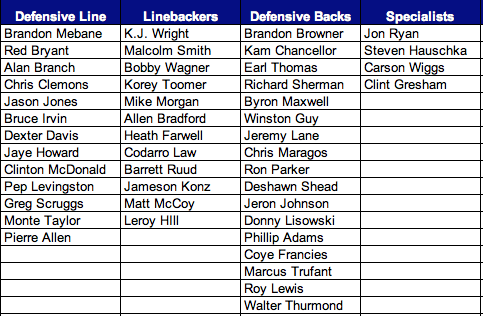 Currently, the distribution is thus:

You can probably expect the Seahawks to keep 9 or 10 defensive backs and 8 to 10 defensive linemen. Over the past couple years, again according to Eric Williams, the Hawks have kept 6.25 linebackers, on average. The team is almost certain to keep three specialists (a punter, kicker, and longsnapper).

The defensive line will be extremely competitive - with players like Clinton McDonald, Pep Levingston, Greg Scruggs, Pierre Allen and Dexter Davis likely on the bubble. Likewise, some good defensive backs will have to be let go, with the 17 currently on the roster likely to be pared down to more like 10. Linebacker, a spot that looked pretty bleak a few months ago, has a few nice competitions likely to emerge, and it's going to be interesting to see what happens with Malcolm Smith, Mike Morgan, Allen Bradford, and Barrett Ruud.

So there was my primer - thoughts on the current state of the roster? Strong positions, weak ones? Spots that we could see some major depth chart battles?