I wanted to piggyback onto an article that Charlie wrote prior to the Seahawks' catastrophic Week 7 matchup with the Browns last season that explored the Seahawks' limited use of a quasi-amoeba look out of some Bandit personnel groupings. The seven defensive back formations (3-1-7) were used frequently in 2010, mostly abandoned in 2011, but could make a comeback in 2012, and this is something that we've talked about around here lately with the additions and investments made on the defensive line and defensive secondary. Even after fielding a pretty decent defense last season, the Seahawks recognized that upgrading a pass rush and improving depth at corner and safety was a high priority. Their decision was to draft Bruce Irvin with their first round pick, Jaye Howard with their fourth, and Winston Guy and Jeremy Lane with their sixth round picks. They re-signed Marcus Trufant, Roy Lewis and added a few UDFA guys to compete with the bunch as well.

As I wrote about recently in my column On the NFL Chess Match, one major challenge for defenses in the modern era is to get pressure on the opposing quarterback while still only rushing four men. Quarterbacks are just too good, and too quick these days to consistently rush five or more players because someone is going to be open. Rushing four leaves seven in the secondary -- theoretically plenty enough to mark the three, four, or five receiving options a team can send downfield. Well, getting to the QB is not always easy, when you consider the offensive line has five, six, or seven players in protection most of the time. With vanilla schemes, this usually comes down to individual players winning personal matchups with opponents -- which means you need very high level players that can consistently beat tackles and guards to get to the quarterback.

Even then, because of the numbers deficit of a four-man rush, top rush players are going to come up empty a lot of the time. That's where stunts, twists, and any of the range of combination rushes or zone blitzes come in and these are meant to confuse the offense into reacting slowly or misdiagnosing and miscalling blocking assignments. I.e., leaving a player unblocked and subsequently unfettered in his pursuit of the quarterback.

One way to create confusion on the part of the offensive line in their attempt to make blocking assignment calls is to show what's called the amoeba front, also known as the 'creep' defense or the 'psycho' front. The amoeba defense is "aptly nicknamed because of its shapeless, ever-changing appearance. The formation, consisting of at least five defensive players in the box with one or fewer down linemen, creates confusion for the quarterback in assigning protection and makes the defense more versatile in pass-coverage schemes."

Greg Cosell explained the principle behind it to Doug Farrar on Week 7's Shutdown Corner Preview Podcast, when asked why quarterbacks, even of Tom Brady's ilk, have had so many issues with the Cowboys, Packers, and a handful of other teams' use of these amoeba fronts. Cosell responded, "It's really common sense, if you think about it. Tom Brady sets the protection at the line of scrimmage, and here's how you set the protections -- you have to choose the five players the offensive linemen are going to block.

"And then, when you get to six and seven rushers, backs and tight ends become responsible for them. When there's no defensive linemen, and nobody with their hands on the ground -- they're kind of milling around in undefined, kind of amorphous positions -- who do you designate as the five defensive players to be blocked by the five offensive linemen?

"So now, Brady comes to the line, and he sees seven or eight people -- at least -- standing up. How does he set the protection? How does the offensive line know who to block?"

It works, and it's hard to plan for on the blackboard, "because you don't know how they're going to move. ...You're dealing with human beings moving around. So, Brady comes to the line -- let's say that there are six guys to the right side of the offensive line, and two on the left. Brady sets the protection. Then, just before the ball is snapped, four of those six on the right side move to the left side. The protection has been set, and the ball has to be snapped because there's two seconds left on the play clock. What do you do?"

Using the same example that Charlie used back in Week 6, below, you can see the Seahawks down two, 30-28, in a very high-pressure situation with just over four minutes remaining in the game, trying to keep Matt Ryan and the Falcons out of their end of the field. A stop here would give the offense the ball back with enough time to drive down the field, score and take the lead. In 3rd and 7, the Seahawks decide to try to confuse Ryan and his offense by breaking out the Bandit look - seven defensive backs - and initially show a amoeba-esque look by milling about standing up prior to the snap.

Marcus Trufant and Brandon Browner are on the corners, Earl Thomas and Jeron Johnson at deep safety, and Richard Sherman, Atari Bigby, and Walter Thurmond milling about as wild-cards (Kam was hurt this game). David Hawthorne is the lone linebacker, with Raheem Brock, Brandon Mebane, and Chris Clemons on the line, still standing up. The nice part about the Bandit is that you can bring pressure from just about anywhere, because of the scheme- and coverage-versatility of each DB. Lawyer Milloy got four sacks in 2010, and I'd guess several of them came from this package.

Below, you can see Ryan assess the situation and point out who he thinks is the 'mike' in this situation - one common way to quickly determine blocking assignments. You can also see the center making his assignment call to his fellow linemen. You'll note that Sherman starts on the offensive left (top of screen), but Tony Gonzalez goes into motion to the right and Sherm follows him across the formation (2nd picture). 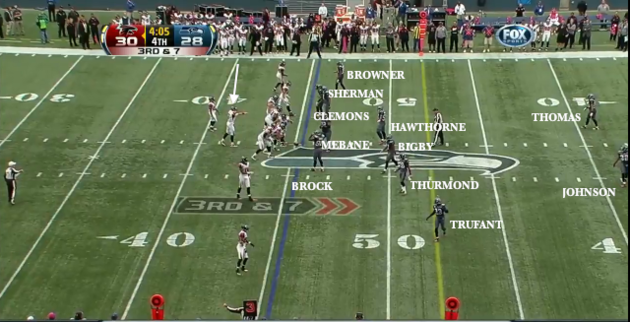 Now 11 seconds remain on the play clock. Chris Clemons moves back and David Hawthorne moves up. You can see the line making more calls and possibly changing the assignments again. This is why you send players in motion on offense. 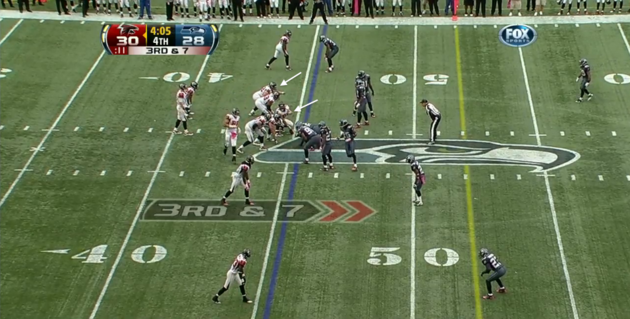 When the ball is snapped, only Raheem Brock has his hand on the ground. Clemons times the rush perfectly and actually slips past his block through the B-gap. Unfortunately for Seattle, in what could have been a game-changing play, Matt Ryan deftly strafes to his left and escapes the pocket, then after a beat to look downfield, takes off downfield in a scramble. 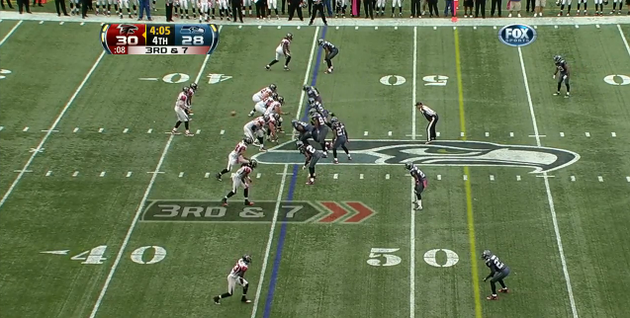 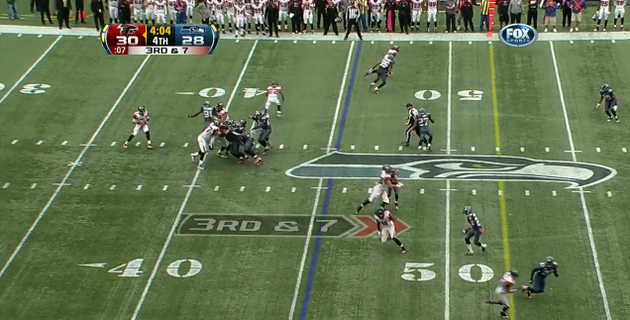 Below you can see Ryan make a break for the first-down marker. Bigby has gone in coverage of the running back so is out on the wing and only Raheem Brock, who started on the other side of the formation as the defensive end, is left in pursuit. Ryan has just enough burst to escape and Raheem just barely trips him up with a shoe-string tackle. The play goes for a first down as Ryan skids and skips forward past the Seahawks' 48-yard line. A crucial first down for Atlanta.

The problem with the amoeba, of course, is that it leaves players out of position and susceptible to being sealed off from the play completely or blocked more easily. Once Clemons missed Ryan, barely, the Falcons had the advantage -- they'd beaten the initial surge, blitzkrieg, what have you -- and the left side of the field was fairly wide open. As Charlie pointed out originally, the Seahawks weren't very good in this look in 2011 and really didn't do it all that often, but that's not to say they didn't want to.

It's tough to make predictions about what the Seahawks may or may not do in 2012 but I could certainly see this type of scheme make a bit of a comeback. The personnel available to Pete Carroll and Gus Bradley has the potential to be much improved, and with Bruce Irvin, Jaye Howard, and Jason Jones now in the mix, the talent and scheme-versatility up front could be interesting. Also, with greater sideline-to-sideline speed at defensive back and linebacker, it gives you more ability to chase down plays that spill out of the pocket, in theory. Hide your intentions, send pass rushers from various spots, keep the offensive line guessing. I don't know if the Seahawks' will end up going this route, but it's an interesting possibility.