ACL Injuries, Football, and Me

Share All sharing options for: ACL Injuries, Football, and Me

I tore my ACL playing indoor soccer on December 8th, 2011 at about 6:30 PM. Here's how my thought process went... Cut left (plants right leg), no right (body goes right, knee goes left). One horrible pop later and it was over. I had reconstructive surgery on New Year's Eve, which that puts me a little over six months into the recovery process. Obviously the journey back has sucked. An excellent physical therapist certainly helps though. The good news is I started writing here at Field Gulls in my time off.

I wanted to share my understanding of the injury and address a few football players who have torn an ACL, mostly focusing on Seahawks. We'll start with the basics. Your ACL is important because losing your ACL means you can stir your lower leg around like you're brewing a pot. Okay, so I'm not very good at describing it. A diagram by Steve Greenberg should work better. 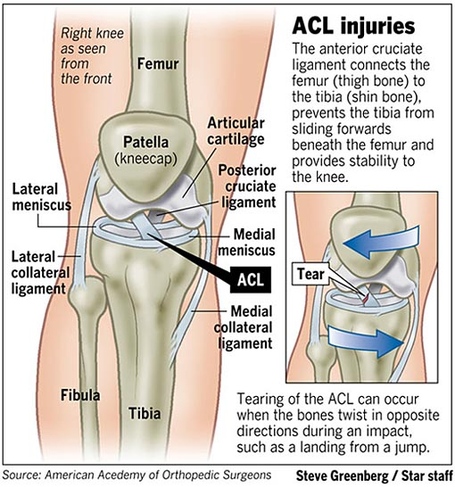 The ACL is a small, tightly woven ligament. If someone manages a partial tear and they lead an active lifestyle then it's usually only a matter of time before the rest gives way. Larger, more loosely woven ligaments, like the MCL (seen above), can generally repair themselves with rest. The ACL is too tightly wound though and almost always requires surgery to repair.

There are very few nerve endings surrounding the ACL. This is why athletes often walk away from an ACL tear with little or no limp. More sustained pain usually indicates of a torn meniscus and/or MCL. One can experience either injury without tearing the ACL, but rarely both. The "Trifecta," as my surgeon calls it, occurs when the knee bends inward; the outside of femur comes crashing down on tibia, crushing the lateral meniscus (seen above), and stretching the MCL until it tears. Adrian Peterson and Matt McCoy both suffered the "Trifecta."

Meniscus is cartilage meant to help cushion the impact in your knee as you walk or run. The meniscus can't heal itself, and there's no replacing it, so tearing your meniscus means losing some of it. I was lucky and only lost about 10% of mine. Long term knee pain after an ACL tear usually stems from how much meniscus is lost since there's no longer that buffer between the femur and tibia. The arthroscopic surgeries you often see months or even years after reconstruction are generally for cleaning out more meniscus. I of course don't know for certain but I'd wager that over the course of his six knee surgeries, Kellen Winslow has lost at least 50% of his meniscus from his right knee.

There are three "choices" to reconstruct the ACL with; patellar tendon, hamstring, or cadaver (aka a dead dude's achilles). Using the patellar tendon is by far the most painful choice and also the only realistic option for a competitive athlete. A hamstring graft tends to stretch out over time with an increased chance to re-tear it while cadavers have an unknown immune system rejection rate - my surgeon offered "about 10%."

The patellar tendon connects the knee cap to the tibia. The graft (seen here) removes the middle third of the tendon and the remaining two thirds are sown together. The front of the knee is understandably tender for a long time after that. The benefit of a patellar tendon graft well outweighs the cost though. Once the graft fuses with the bone, the repaired ACL is actually stronger than the original.

Rehabilitation starts as soon as possible after the injury. Swelling in the knee causes the quadricep on the injured leg to atrophy. Doctors encourage people to walk around without a brace ASAP to combat the atrophy. I did my best and was astonished how whimpy my leg became. My right leg is still noticeably smaller and weaker than my left. I'd imagine that James Carpenter has been experiencing similar frustrations. Building strength is at a premium for physical therapy. Re-establishing the quadricep takes precedent but glutes, hamstring, and core strength are similarly important for protecting the knee - they just don't suffer the same degree of degradation.

From the moment the MRI confirmed my injury, I basically knew how physically demanding my recovery would be, especially while fulfilling the remaining nine months of a full-time labour-intensive job. What I didn't know is how mentally and emotionally exhausting it would be. Mentally, I want to challenge my knee and push the recovery along as fast as I can, but I know I must remain vigilant about protecting it. Trying to maintain that balance is a constant presence in my mind. Eventually abandoning the desire to protect it will be a challenge unto itself. Emotionally, staying positive is absolutely essential. As an athlete, that's no easy task when you can't jog for four months, can't sprint for seven, and can't play sports for ten.

They say there's no off-season for a professional football player.

Physically I understand this sentiment, even if I can't directly relate to it. The level of competition in the NFL is so high now that a player can't enter training camp out of shape if they want truly want to succeed. Mentally and emotionally I now totally disagree with the above statement. Most players continue training in the off-season but the pressure to perform is nowhere in sight. This time away from coaches and packed NFL stadiums affords players the opportunity to re-steel themselves for the coming season. A player recovering from an ACL tear (or any major injury for that matter) can't spare this rest period. They face the pressure to stick to their recovery timetable, plus the pressure to get their career back on track, plus all the challenges I mentioned in the prior paragraph.

All of these factors add up and take their toll on a player's psyche. I believe that these mental and emotional pressures contribute in a big way to players typically requiring two years to return to their previous abilities on the field. Physically it can be done though. Robert Turbin's tremendous Senior season after tearing his ACL the previous year comes to mind. However, hopefully you can see why these cases of immediate success upon recovery are the exception and not the rule. Will AP be AP this year? Let's not forget, AP is AP.

I'll finish with some assorted thoughts and predictions for a few players of interest. Based on the date of the injury, where he's at in the recovery process, some struggles with the speed of the game, and Pete's careful approach with seriously injured coveted players, I would be shocked if Carp didn't start the season on the PUP. Matt McCoys appears to be right in the thick of the linebacker competition. That alone is a serious accomplishment given the severity of his injury. Tennessee's Justin Hunter ranks as the third best WR in college football by most accounts -despite just 33 career catches and tearing his ACL last year. He has all the tools and is an underrated route runner. Definitely one to watch this season. I've attached a feature on him and his recovery below (note: he's a Junior, not a Senior).