ProFootballTalk is privy, every month or so, to NFL salary cap information on a high level basis by team. I used the numbers from the most recent PFT blog and coupled that with a great article from Jason LaConfora back on March 30th, which had the team by team cap rollover numbers along with the 2012 adjusted cap numbers for each NFL team.

As a review, the 2012 official league-wide cap is $120 million. In 2013, that number is expected to grow only to $121 million, with 2014 at $122 million and a modest bump to $125 million in 2015. Tucked into the new CBA is a provision that allows NFL teams to rollover unused cap space into the next year. Once a team rolls, for example, $10M, their adjusted cap for the next NFL season increases by that rolled $10M. If a team had the league-wide standard of $120M in 2011, their 2012 Adjusted Cap would be $130M because of the rolled $10M. I believe this adjusted cap can keep growing and growing, and I have read this CBA section and did not see any language that says otherwise. I even reached out to various cap experts, and no one refuted it - to be fair, no one responded! I will follow up with the various scenarios that we could see happen, depending on the interpretation of the CBA, in the next few days.

After the jump, you'll see a spreadsheet that ranks the NFL by their 2012 Adjusted Cap, 2011-2012 Rollover Amount, and Estimated 2013 Adjusted Cap. The Seattle Seahawks are ranked in the top quartile in all three of these related categories. 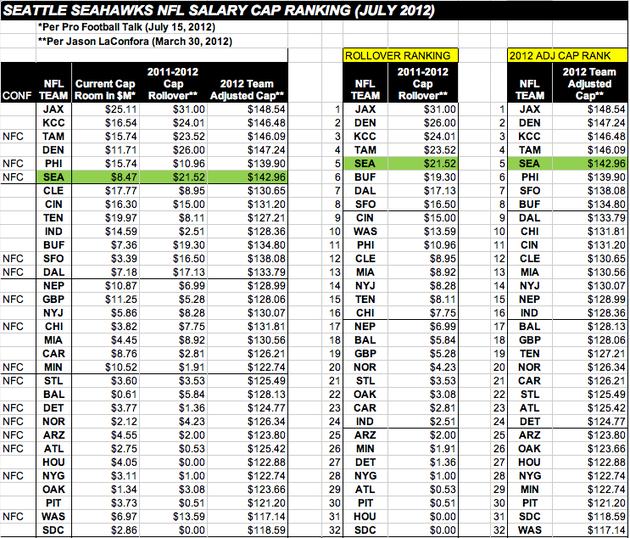 Unsigned draft picks, cap casualties, cuts, performance bonuses and the amount that each individual NFL team chooses to rollover will determine the final 2013 Adjusted Cap for each team, assuredly making the final results different than the estimate. This exercise is simply a rough gauge of potential room for next year. Brian McIntyre is doing a series that looks at the salary cap for each team for NFLcom, and his numbers for Dallas, for instance, match up with those above. The interesting key to the numbers above though, is that there are still many teams (probably half) that have not signed their first round picks. Dallas, once they sign Morris Claiborne, will bump up $4M in spending and their cap space will decrease.