This article is a followup and correction from yesterday's post about the Seahawks salary cap with some theoretical scenarios that I had to abridge because they proved to be a pipe dream. I received a timely response tweet from Brian McIntyre, a longtime salary cap and blogging master who currently works for NFL.com's "Around the League" blog. Brian explained how the salary cap rollover really works, and it is not in the way I had hoped it would be -- which will henceforth be named the "Incredible Snowball Effect Cap Roll". More on that later...

What's the significance of this $134.59M in current spent cap dollars? 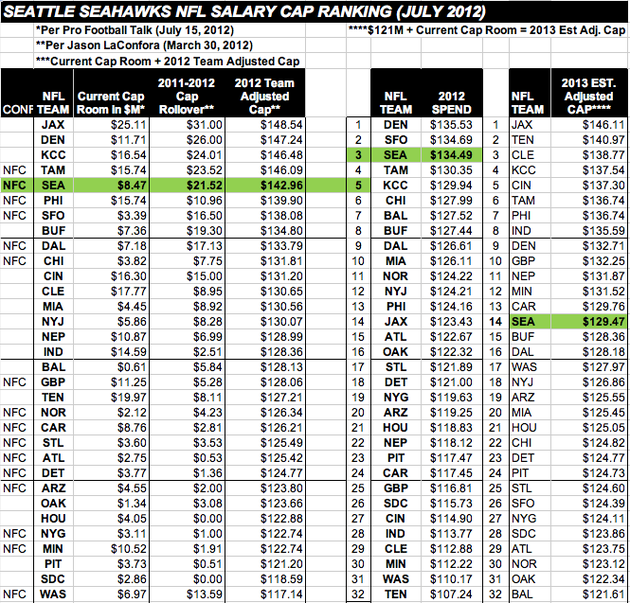 As of today, the Seahawks are spending more than 29 other NFL teams. The only teams spending more than Seattle are the Denver Broncos, who spent a large chunk of their $26M rollover paying the highest profile free agent since Reggie White, Mr. Peyton Manning (and friends). They are spending $135.53M, only $1M more than Seattle. And who is Seattle neck-and-neck with? The friends from down south led by Mr. Jim Harbaugh, the San Francisco 49ers at $134.69M.

Now, fourteen 1st Round Draft Picks have yet to sign, so teams like Tampa and Dallas will jump up in their team spend, and have their available cap room and rollover decrease by the same amount. Cleveland has to sign both Brandon Weeden and Trent Richardson, and of course Indianapolis and Washington will have the biggest hit signing the top two draft picks, Andrew Luck and Robert Griffin III. These spending numbers will change as these fourteen picks are signed. These numbers will also swing back as NFL teams cut cap casualties in the next month and a half. More on this later...

HOW THE CAP ROLLOVER REALLY WORKS

I had erroneously hoped that a team could keep growing its adjusted salary cap, but alas -- it does reset and the rollover is pegged to the "base" NFL salary cap each year.

WHY I THINK MORE CUTS ARE COMING

If all of that looks like a big blur to you, just use this as a takeaway -- the Seahawks will be have to reduce spending from where they are today until at least 2015. I propose they reduce this spending more gradually than what they would be forced to do if they leave the 2012 cap situation "as is".

Why are 2013 and 2014 so important, in regards to creating rollover and keeping the Seahawks adjusted cap high? Because of Seahawk Unrestricted Free Agents looking for raises. In 2013 we are talking about Max Unger, Chris Clemons, Jason Jones and Alan Branch. There are others. In 2014 we are talking about Kam Chancellor, Doug Baldwin, Brandon Browner and more.

Before you refuse to go out and buy the new Nike jersey for your favorite Seahawk, in fear he becomes a cap casualty -- let me throw in a caveat that may brighten your outlook. I believe there is significant dead money in the $134.5M '2012 Seahawks Spend'. At least, I hope there is. What is dead money? Dead money is the cap charge a team takes to their salary cap when they cut or trade a player. When big-time free agents and high draft picks get signed, they receive substantial signing bonuses. Those signing bonuses are paid in cash, but the team is able to prorate the signing bonus over the life of the contract (with a limit of five years).

The ability to prorate a signing bonus is why the Ravens 2012 cap situation actually improved after signing Ray Rice to a long-term deal. Before the signing of Rice the Ravens had less than $1M in cap room. The Saints cap situation in 2012 improved as well after they signed Drew Brees. Why? Again, because the signing bonuses are pro-rated over the life of the contract and in some situations the base salary in year one of the deal is low.

There is some Colin Cole dead money packed into the current Seahawks 2012 salary cap - as he was cut after June 1st, 2011. There may also be some dead money tied to Marcus Trufant (who was released from his original 2008 deal that had a $10M signing bonus). There may or may not be dead money tied to Aaron Curry, as I know his deal was restructured before he was traded, but I am leaning toward the "there is dead money in the 2012 cap tied to Aaron Curry" camp. There may be a little Stacey Andrews (remember him?) dead money. I could go on, but do you want to be reminded of Kentwan Balmer?

The thing is, there will always be dead money, every team has some, and every team will have some because the best teams and the worst teams all cut players every year. Hopefully this amount decreases in the future under the current regime. If that amount drops in 2013 the Seahawks are in good shape.

MY PROPOSED CAP FUTURE FOR THE SEAHAWKS VS THE NFL

Again, I propose the Seahawks trim some more weight this year to create more cap room in 2013 and 2014. My proposal is below with a plausible scenario for what I think the the Median NFL will do in the next 3-4 years. The Seahawks have a cap advantage in 2012 and 2013 (and hopefully 2014) because they rolled $21M from 2011 while the Median NFL team rolled only $7M.

However, the Seahawks should be in the 2013 2nd quartile if they stand pat, and can be in the top-8 with a bit of trimming in the next two months.