On Sideline-to-Sideline Speed at Linebacker

The importance of "team speed" on defense.

Share All sharing options for: On Sideline-to-Sideline Speed at Linebacker

One of the main things that the Seahawks' front office talked about upgrading over this offseason was 'team speed,' particularly at the linebacker position. David Hawthorne, for all his savvy and leadership and veteranosity and all that, wasn't offered a big contract and ultimately left to take a better deal with the Saints. Before him, Lofa Tatupu was allowed to leave after he declined a large pay cut. The one main thing these two former Seahawk linebackers had in common was a lack of top-end speed (to put it kindly).

The Seahawks made good on their word and selected two of the fastest linebackers in the draft this year - Utah State's Bobby Wagner in the 2nd and Idaho's Korey Toomer in the 5th. Rumor has it that the Seahawks were also really high on an insanely athletic linebacker out of Cal, Mychal Kendricks, who went to the Eagles just before the Seahawks took Wagner. Personally, I was disappointed to see them pass on Lavonte David in the 2nd there, but it is what it is -- I guess Wagner was a bigger need in the middle of the field to replace a departed Hawthorne.

With the way the Seahawks' defensive line is set up in base personnel, using three 310+ pounders in Red Bryant, Alan Branch, and Brandon Mebane to plug up the middle and strongside of the field, soak up blocks, and stop the run, teams are going to try and bounce things out to the perimeter or utilize their speed to otherwise counter the Seahawks' advantage in the middle. Also, very generally speaking, because of the size the Seahawks have up front, their linebackers should have to take on fewer blocks and instead flow to the ball and make plays in space. This is where speed is so important.

Seahawks Defensive Coordinator Gus Bradley recently described their evaluation process when it comes to the linebacker position. "I think it's a unique combination that we're looking for," he said. "In the 3-4, the linebackers are big, physical type guys; the guards are going to come right at them and they have got to be stout enough to take on the guard. Then, the 4-3, you want speed. The Lance Briggses, the Derrick Brookses, the guys that can really move well, lateral movement, and those guys are always protected. Well, we do both. Instead of maybe the 260 pound linebackers, or the 225 pound guys, we like that guy that's 240 and can run a high 4.4. So, we're getting that hybrid that can do both. That's what we're really trying to be looking for. But, we try not to put them in too many positions where they're taking on the guard, so we're probably leaning more towards the 4-3 principles."

Now, the most obvious need for speed at the linebacker position comes down, simply, to matchups. In base personnel, you're going to have linebackers matched up against running backs and/or tight ends and in particular, tight ends are becoming more and more athletic and rangy. Teams are employing tight ends in non-traditional fashion (i.e., not just on the line, blocking) and linebackers these days must be able to follow a Jimmy Graham or Rob Gronkowski or Antonio Gates or Tony Gonzalez down the seam in pass coverage. As for running backs, even that position has become more dynamic -- facing backs like Arian Foster, Lesean McCoy, Ray Rice or especially Darren Sproles is no easy thing.

According to Football Outsiders' metrics, the Seahawks, over the past three years, have ranked 30th, 29th, and 32nd, respectively, verses running backs. They ranked 10th and 11th the past two years against TEs, so again, this is one of the reasons that the Seahawks felt the need to upgrade their speed at the linebacker position. They loved Bobby Wagner in coverage and that's a big reason he should see plenty of snaps early on. But, this article is not about linebackers running in pass coverage. I wanted to talk about sideline-to-sideline run defense from the middle linebacker position because when we talk about speed at the position, it's more than just pass coverage.

One of the things that happened in 2011 as the season wore on is that teams recognized it was going to be very, very tough to run up the middle of the field agains the Seahawks. So, because offensive coordinators at the NFL level, generally, aren't stupid, opposing teams started utilizing their speedier running backs and went about moving down the field by working and stretching the field laterally. Red Bryant isn't going to catch many 210-pound running backs from behind or break down and tackle them in space, and David Hawthorne is just not a sideline-to-sideline guy.

Now, K.J. Wright did a pretty great job on the strongside next to Bryant for the most part and his versatility and athleticism is a big part of the reason the Seahawks still did have a run defense that gave up a mere 3.8 yards per carry on the year, good for 4th best in the NFL. That said, the Seahawks' final six opponents eclipsed the 100 yard mark in rushing and you know that Pete Carroll wasn't loving the fact Seattle gave up 178 yards on the ground to Jim Harbaugh's 49ers in Week 16. The speedy Kendall Hunter picked up 73 yards on 12 attempts for a 6.1 per carry average and with LaMichael James now in the mix, Seattle must evolve.

Below -- the play I picked out from Seattle's Week 10 win over Baltimore was a good enough example. You may remember that the Ravens, on their first possession, badly gouged the Seahawks with two consecutive end-around plays, first to Torrey Smith then followed up with one by Seahawks MVP that game, David Reed -- both for 16 yards. Then, they completely abandoned that idea because it didn't seem to be working. Let's just throw it deep and forget we have Ray Rice! Ok, their curious offensive playcalling is neither here nor there.

Below, 1st and 10, no score, Ravens nearing mid-field. The Ravens will fake the run to the left with a total sell by the line, the fullback, and the running back. It works. I've penciled in where David Reed will run at the snap. 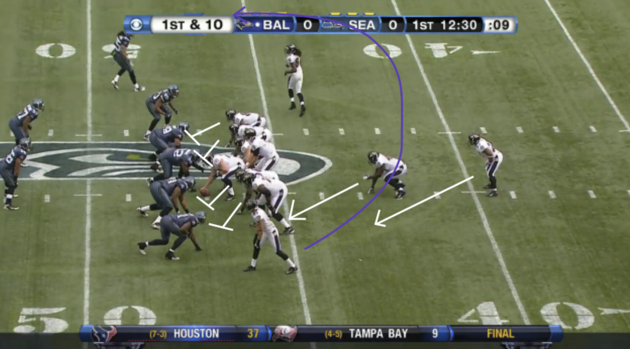 Below, you can see the Seahawks bite on the run action -- Chris Clemons actually gets pancaked here so the run-blocking was, shall we say, genuine? Regardless, you can see below that Leroy Hill (ROLB) and Earl Thomas crash toward the line, and on the backside of the play, LOLB K.J. Wright and MLB David Hawthrone bite on the run that way as well. Richard Sherman is playing heads up on Torrey Smith on the wing in man. 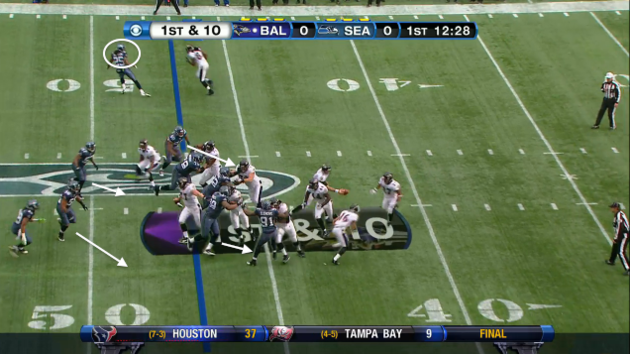 Below, as the numbers indicate, the Seahawks have seven defenders bunched into the box, with K.J. Wright on the backside as a borderline eighth. He will get sucked in too far and by the time he recognizes it's an end around, he's out of the play. A rare misread play by Wright. 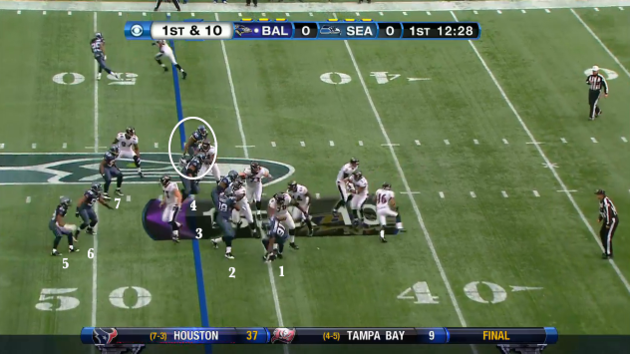 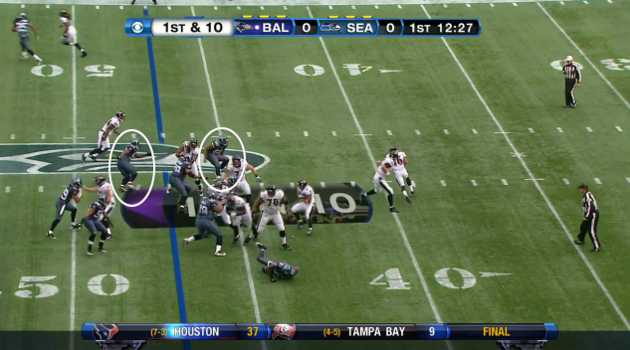 Above, you see Hawthorne react. Below, in the next two slides, you'll see why an ability to 'close' is important. Reed just beats Hawthorne to the corner. 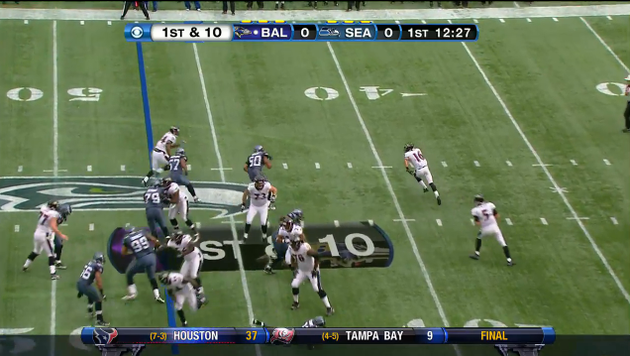 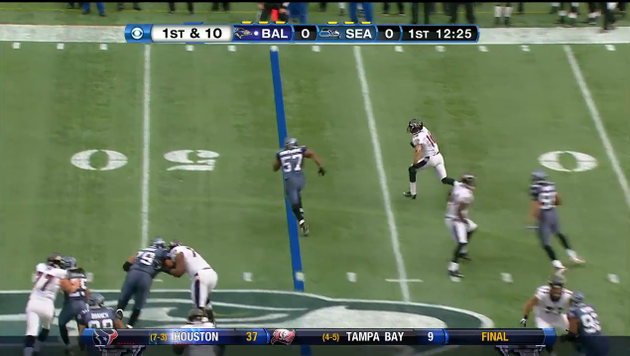 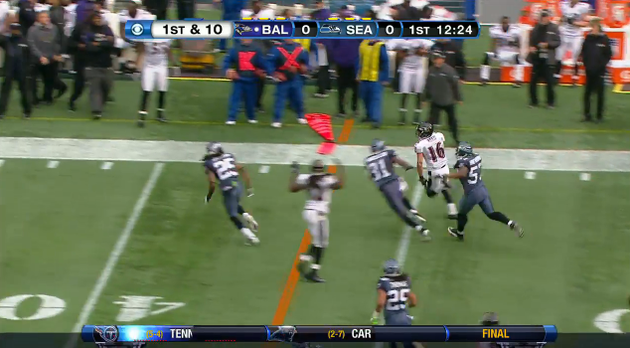 Kam Chancellor takes a bad angle too, as you see above, and Reed manages to pickup an additional six yards or so from where he's standing here. This sideline-to-sideline speed that you'll hear people talk about is what could make Bobby Wagner a special player. He's lauded for his ability to get off of blocks, run in coverage, and read plays, but his closing speed should allow him to make plays in space where you must break down and tackle or chase down an offensive ballcarrier -- the above end-around being an example. Another factor at play here is that often you'll see a quarterback get flushed from the pocket against the Seahawks, and far too often those quarterbacks were able to scramble for ten yards in front of the tightly-covered receivers in the secondary.

Anyway, it's common sense as to why this speed may be beneficial for the Seahawks' defense. But, when you really look at individual plays from 2011 where things broke down in the intermediate range of the defense, many times, the lack of speed was apparent.