Share All sharing options for: Charting Russell Wilson's Pass Plays vs. the Titans

I charted Russell Wilson's nineteen passing snaps and the results are attached below. After watching the entire body of work about three or four times, if I were asked to give him a grade, I would give him a solid "B" for his efforts. I have some observations below, with game-stills accompanying each highlight or lowlight - with thanks to Danny for snapping those and adding to this piece. All in all:

- Eight of the twelve snaps under-center involved play-action. This is a very high percentage (66%).

- I picked out three plays that I felt warranted a negative grade, and three that stood out in a positive way and theses are represented in orange and yellow on spreadsheet, respectively.

I felt he ran too early and unsuccessfully for a first down. 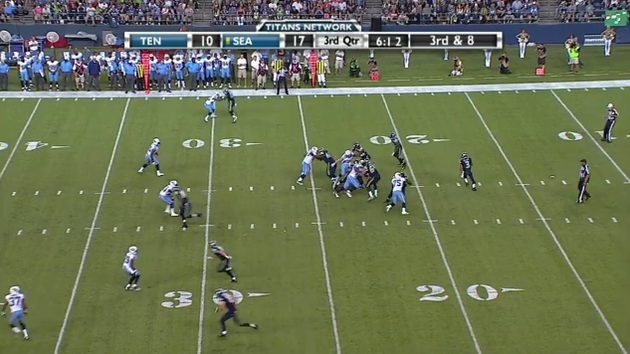 Leaves pocket and starts to head downfield. Had plenty of room to drift right, in my opinion, but these types of things are coachable. 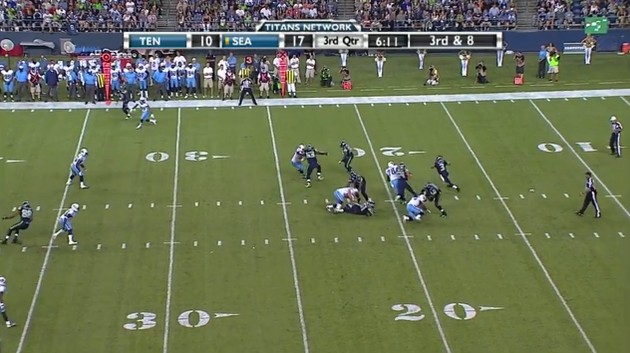 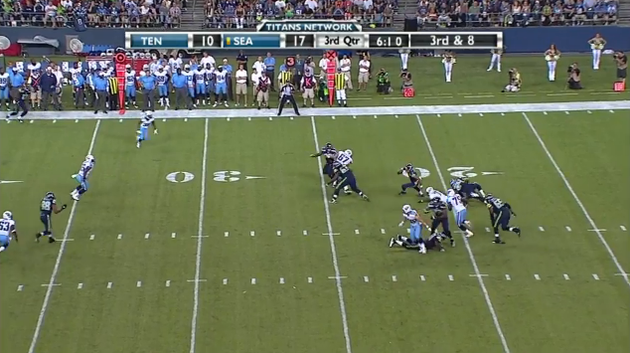 Ball was tipped by TEN defensive lineman on an attempted screen play to Kregg Lumpkin. 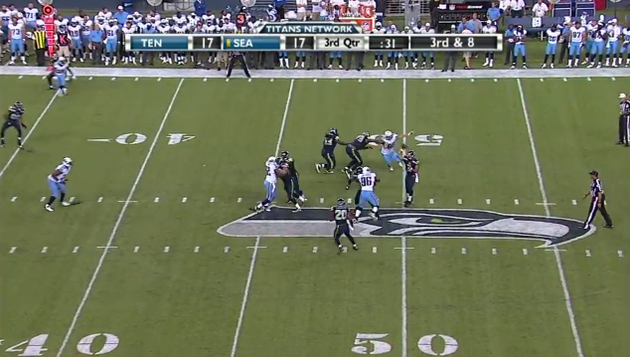 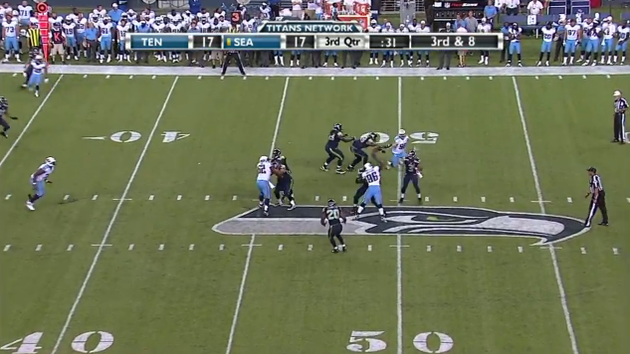 The interception. As has been talked about here - McGrath did have a step up the seam and was splitting the safeties, but Wilson short-armed it badly. 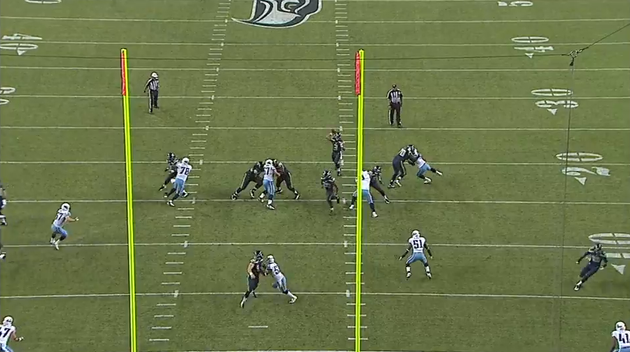 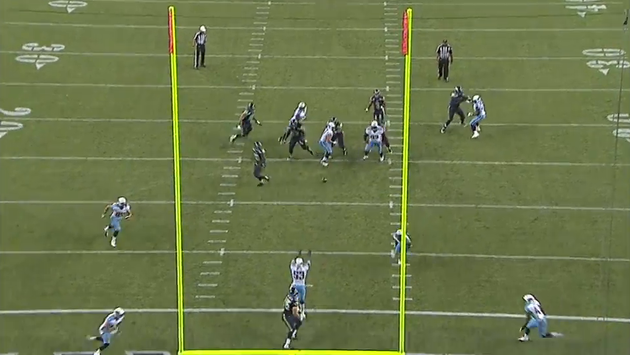 Positive plays - the three that stood out to me (and he had other solid plays):

Complete to Martin for 1st down on 3rd and 6th. 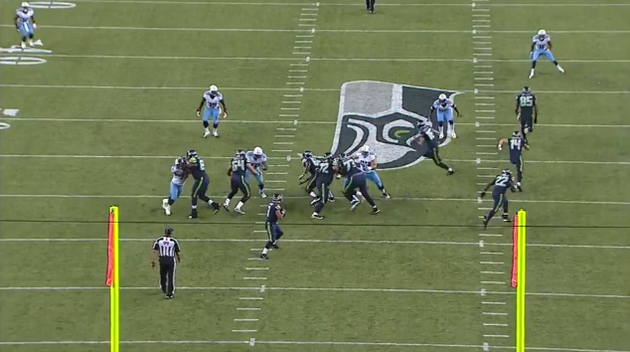 Ball is snapped, Wilson waits for the play to develop. Pocket collapses as RG Deuce Lutui gets tripped up with C Lemuel Jeanpierre, and RT Barron misses block on stunting LB Patrick Bailey (on right). So, Wilson rolls out to the right after evading the sack (a good movement behind the line on this play to avoid a big loss). 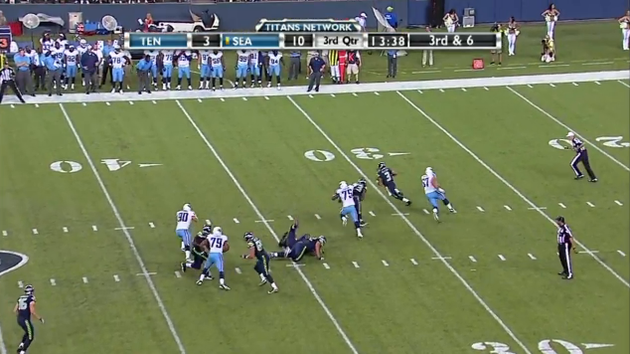 Below, you can see Wilson's two targets - 22 RB Robert Turbin on the right and 14 WR Charly Martin. Linebacker Zac Diles has split the difference between the two. Wilson opts for Martin. 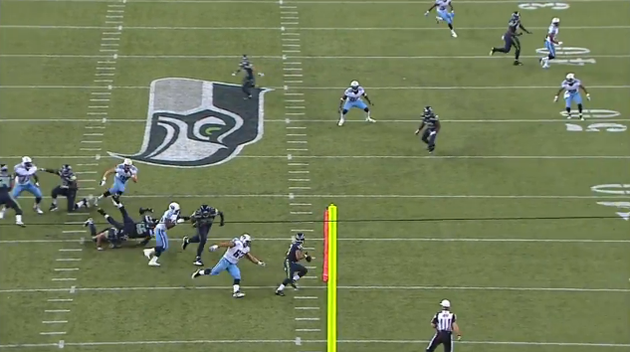 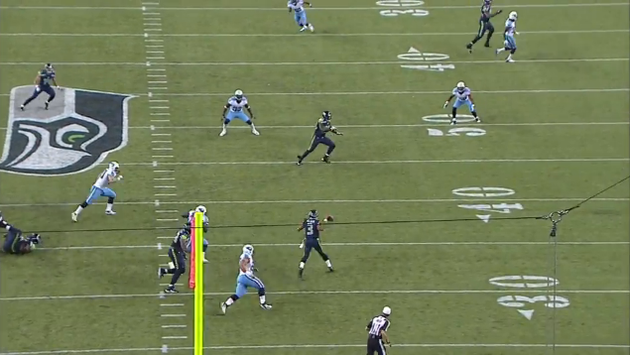 Diles comes close to making the play, but the ball sneaks past for a completion and drive-extending first down. 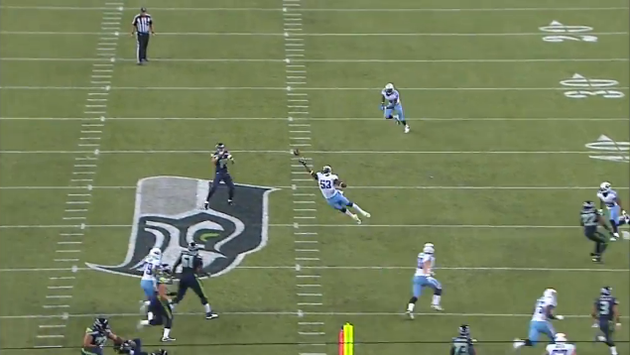 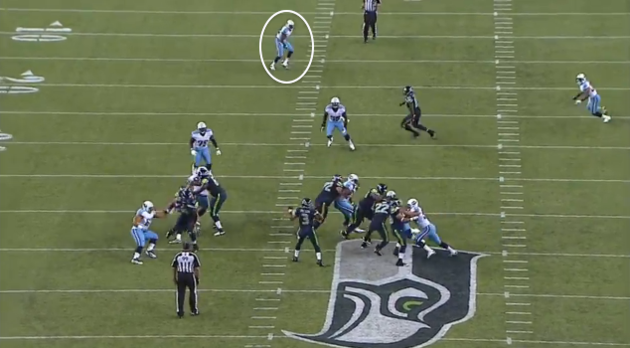 Just a nice completion over the middle to Robert Turbin for 7 on 3rd and 5. 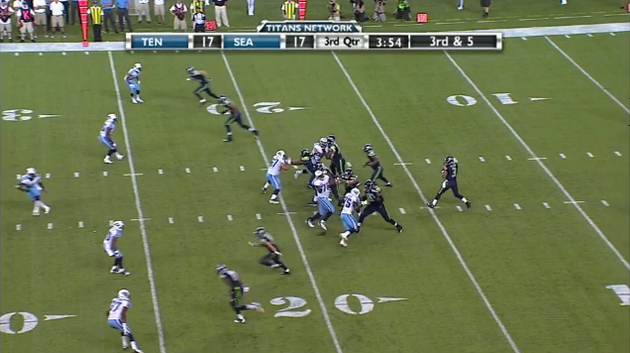 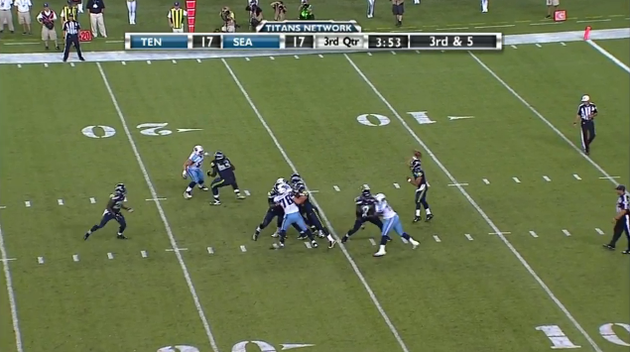 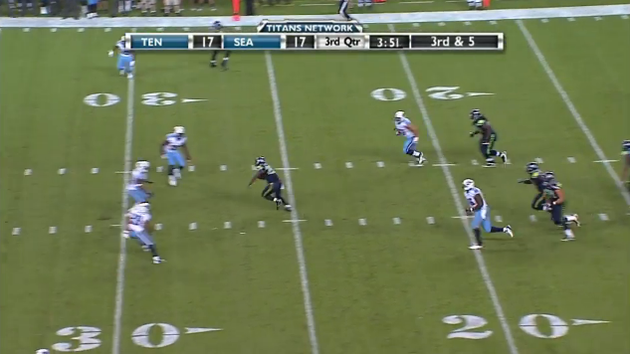 The bootleg touchdown was a designed run so I didn't include that in this analysis - you can blame the Tennessee defender for biting - but I still say that's a great play by Wilson.

- There were 5 designed roll-outs, and I believe all but one were designed to roll right, and the one that moved left was more a "short-roll" or "half-roll"

- Wilson rolls right 4 other times (not designed) and I believe two of those times he may have been able to step up, and the other two looked like the right call as there was nowhere to go up the middle to climb the pocket.

- The first possession resulted in a quick touchdown. The second possession was hampered by two false starts (Barron and Omiyale) and the drive never got off the ground because of those penalties. The third possession took over 5 minutes but only resulted in a punt as Seattle started on their own 15 yard line. Wilson drops back nine times on this third possession but was not helped by the running game.

Wilson's best play on the third possession was a 23 yard scramble- yet yardage was called back on a blocking penalty. Fourth possession was a "play it safe" possession as Seattle was already in Field Goal range. Fifth possession was one play and results in the lousy interception. Sixth possession was a "four minute drill" where Seattle takes over with over four minutes to go and leading by 3 - Carroll is just trying to run out the clock and gain first downs - and this drive ends with the touchdown on the naked bootleg.

Here is a chart for each of Russell Wilson's pass plays. 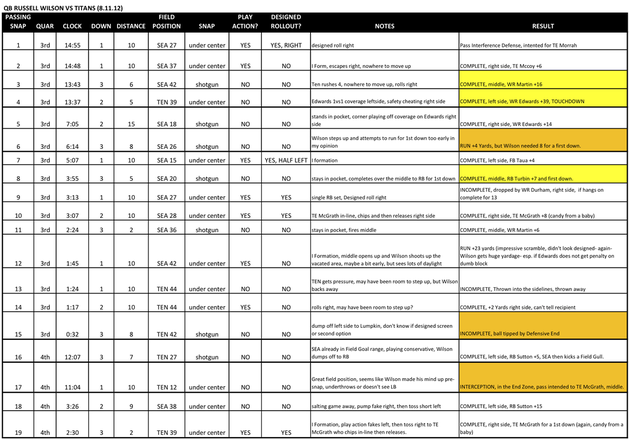