Seahawks: Matt Flynn and the Throw He Didn't Make

Share All sharing options for: Seahawks: Matt Flynn and the Throw He Didn't Make

From Saturday until late yesterday, I was off the grid. No internet, no TV, no phone. I couldn't check scores, text anyone, or tweet about how much I love Full House. Just kidding... I don't have anyone to text.

Being off of the grid was frustrating at times, but mostly it was a great escape. How much information and connectivity do we really need? I didn't just survive without a phone, I did perfectly fine without it. I wouldn't say that I "thrived" but I could have done just as well with a newspaper, and yeah, a TV somewhere to watch the Seahawks play the Titans would have been nice. But I just allowed myself those few days to escape into the mountains and know that no matter where I was, life was still going on and I would come back to it.

As I got closer into town yesterday, I allowed myself to finally check Twitter and the Seahawks box score. I guess I didn't really know what to expect, since it's the preseason, but I was hoping I wouldn't see a lot of bad news. This includes injuries and one or two awful performances from Matt Flynn and Russell Wilson. What I got felt a lot more like a best case scenario: no injuries (that I know of as of this writing), solid numbers from Wilson and Flynn, and a win. I should go off the grid for more Seahawks games.

Luckily, "technology" did end up saving my weekend, as I was able to watch the game late last night on Rewind. As much as it's nice to escape the city, it's wonderful how far we've come in satisfying sports fans. It's almost as if they want our money or something.

I'll talk about Wilson another time, for now I wanted to just point out maybe the best play that I saw Flynn make. It's possibly something that was noticed and gone over in the Game Thread or maybe something that I glossed over in the recaps, so forgive me if you've heard this before, but this is the play that most stood out to me from a perspective of what Flynn brings to the table that perhaps most quarterbacks with two NFL starts don't.

I'll begin by saying that I was not entirely impressed with Flynn. It's only one half of a preseason game, of course, but I came away with plenty of things that could concern me if they continued. First and foremost being that 5.46 yards per attempt is not going to cut it.

The whole leadup and story surrounding the Flynn acquisition, in terms of his positives and negatives, is that he doesn't have a strong arm. His first drive, while it impressively took off over nine minutes of clock and led to a score, didn't do anything to dispel that with throws of 5 yards, 5 yards, PI that enforced 4 yards, 4 yards, 10 yards, -2 yards, and 5 yards. Right now, Matt Flynn's arm mimics a good running back and not a top quarterback.

There were more exciting moments through the first half, including the rollout to Zach Miller that was detailed here at FieldGulls, but also moments like the interception that just seemed to be "My coaches told me to throw it here, so now I'm going to throw it here." When most of your passes are going to come within 10 yards, then accuracy, playcalling, pocket presence, and decision-making are going to be paramount. Flynn has to be able to have a mind that can turn off a decision to make a quick throw on a slant, if it turns out that a defender is standing there instead, and he's going to have to do it in a fraction of a fraction of a second. That's something that will come with more on-the-job training, hopefully.

Which brings me to the best play that I saw Matt Flynn make on Saturday night, and that's the throw that he didn't make.

I can't imagine what Flynn's life has been like this year. He hit free agency for the first time and probably felt pretty good about his prospects. After all, he was likely the second best quarterback on the market and that can usually bring in big bucks because of the value of the quarterback position. However, him and his agent underestimated just how much NFL GMs have soured on giving backups large contracts after seeing several organizations burned by operating in this fashion.

Instead, Flynn signed a good but modest deal with Seattle and the Dolphins didn't quite bid for his services like they thought he might. Still, he signed with the Seahawks and with Tarvaris Jackson as his competition, it was only a matter of time before Flynn would be a starter in the NFL. Then he could turn those four years of being a backup into a couple of years of being a starter and perhaps get a lot more money after he proved himself.

Then Seattle drafted Russell Wilson in the third round of the NFL draft and the Northwest had a new favorite quarterback. Sure, there were and are plenty of people that prefer Flynn for at least this season, but most of us are more familiar with Wilson. Most of us are enamored with the numbers he put up for two different D-1 colleges. Wilson instantly became the future and now also was squarely in the running for the present. What could that have felt like for Flynn? His first foray into free agency didn't come as he expected and his first competition to be a starter didn't go as expected.

I can imagine that pressure has been building for Flynn for quite some time. Pressure that could have caught up with him.

Saturday was Flynn's first chance to play on television in a real(ish) game against a real NFL defense, in front of the Seattle crowd. This was our first chance as fans to see what Flynn had to bring to the table and win our hearts so that we could believe that he's the guy that's going to take us back to the playoffs this year. Otherwise, the chants of "Russell" aren't far behind.

Brandon Browner gave Flynn an unexpected 7-0 lead with the "Browner Bounce," a move he is apparently perfecting by catching deflected passes for touchdowns, and so with 12:08 remaining in the first quarter after a Titans punt, Flynn was in.

I've already somewhat detailed his passing chart and came away slightly disappointed that he either couldn't push the ball downfield or the coaches weren't ready to put him in that position. Yeah, he completed six of six passes, but for only a total of 27 yards. Later in the game, it wouldn't take much time at all for Wilson to gain that kind of yardage. He did more than that in a single pass to Braylon Edwards, not close to what we mostly saw out of Flynn.

However, Flynn and the Seahawks did drive from their own 15 to the Tennessee 14. With 3:15 left, Seattle and Matt Flynn were facing a 3rd-and-10 on the TEN18 with 3:15 remaining in the game. He was up 7-0 but certainly there had to be some of that pressure to not fail on his first drive in his first game as a Seahawk, in front of the home crowd, after driving down the field and running off nine minutes of the clock. Flynn could have been thinking, "This is my chance to get the crowd on my side, I have to do something here."

The ball was snapped and the receivers released. Flynn didn't run out of time in the pocket, he could have made a throw. But he didn't. Flynn saw nothing and the pocket was collapsing, so he did what I would expect out of a veteran and not a guy that has made two NFL starts;

He tucked it and took the sack.

Sure, it was disappointing to see that Seattle couldn't score a touchdown. You always want touchdowns. But a field goal is better than an interception on a forced throw because you feel pressure to do something. In that moment, I couldn't imagine what kind of pressure he was feeling to do something, especially now, but instead he took a sack and the Seahawks were up 10-0 instead of potentially getting nothing or worse. He didn't force it, he made the veteran move.

Elite quarterbacks are elite for a reason. They possess both physical skills and mental skills of the highest caliber. Peyton Manning is the example to me of the robot quarterback, the kind of player you'd build if you could build a quarterback out of scratch. However, there are plenty of good to great quarterbacks that possess one or the other. Flynn is limited now and could possibly always be limited physically. He's certainly not getting any taller or bigger, and that's fine, but it would also be surprising to see him add considerable arm strength at this point in his life. He is what he is.

That's why it's imperative that if he's going to be successful, he has to have mental skills of the highest caliber. That's where he can overcome his physical limitations to be great. The guy standing across the field, the other former backup quarterback for the Packers that became a Seahawks great, it's not something that I remember him picking up on early in Seattle. Matt Hasselbeck made some bonehead decisions early on in his career and it wasn't until later on, when he had actually started to master playcalling and decision-making and when not to make the throw, that he became great.

This is potentially something that Flynn has a head start on. His interception was a mistake he can learn from, but the throw that he didn't make that didn't turn into an interception when he didn't force it, makes me believe that he's only going to get better from a mental standpoint and that he's already got skills there.

Matt Flynn is on the grid.

Here are your Seahawks fans of the week: 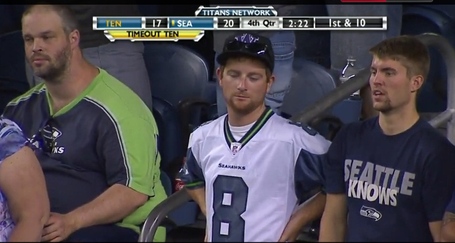