I set out to do a simple Seahawks Replay Booth article about Mike Morgan and a couple of plays he made in Saturday's win over Tennessee, but I got sort of sidetracked because I remembered one particular play that will act as a good way to illustrate why Morgan's effectiveness was encouraging. In case you're unfamiliar, Morgan is an ouside linebacker that went undrafted out of USC in 2011 and signed on with the Seahawks. He was a bit undersized at 6'3, 225 - but ran a blazing 4.46 at his pro day with solid vertical and three-cone drill times as well. He's been on and off the Hawks' practice squad over the past year but early reports from camp have him getting reps in front of this year's 5th round draft pick, Korey Toomer. I picked out a couple of reasons why.

But first, let's go back. Way back, to a play that is just forever burnt into my memory. A missed assignment by Aaron Curry that sort of exemplified the ultimate reason he wasn't a part of the Seahawks' plan at the position going forward. I'm really not even trying to pile on to Aaron Curry at this point because that train has sailed, but Curry's main issue - because it wasn't size, speed, and athleticism - was in diagnosing a play and reacting quickly and decisively to impede or stop said play. This can sometimes be called a player's 'instincts' but, regardless, some players have a knack for being in the right place at the right time, and Curry just didn't show that in Seattle. After the jump, I will show you the play I was brought back to, then will show you a couple of nice stops by Mike Morgan on Saturday that illustrate why he has a shot at the roster.

This was from the lovely Pittsburgh Steelers game from last year. I won't remind you about the details, but in the particular play below, the Steelers are in the Seahawks redzone, driving, with a 1st and 10 at the 15 yard line. 4:56 remaining in the first. The Steelers line up with a three-wide formation and the Seahawks respond with their nickel 4-3 Under personnel, lining Aaron Curry up just outside the tight end Heath Miller as a containment element.

Remember, in the Under, the defensive line is actually shifted towards the weak side of the offensive formation, and the strongside linebacker acts as almost a de facto 5th defensive linemen. As Carroll pointed out while describing every position on his defense, "The Sam linebacker has to be a good containment player. He has to be big and strong enough to play on the edge of the tight end. He has to be able to run in pass coverage also."

Below, you'll see Hines Ward go into motion left, prior to the snap. You can see Aaron Curry lined up off Red Bryant on the line - defensive left, offensive right (strongside). 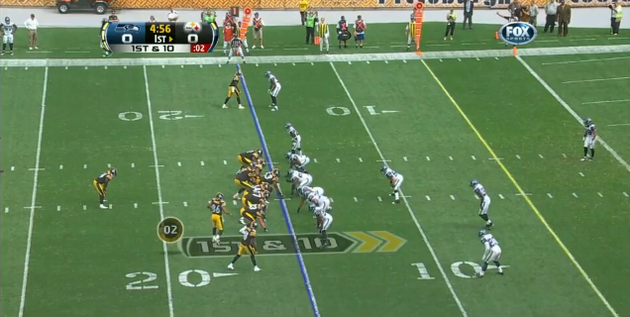 Ball is snapped, and Big Ben goes to hand off the football to Rashad Mendenhall. You can see Curry with eyes on both of them. 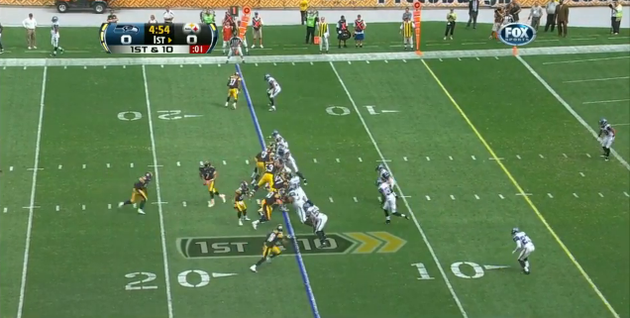 Below, you'll see it from the All-22 angle, and the first read for Mendenhall is to cut downfield off right tackle. Kam Chancellor has neutralized that option (see him creeping in to fill the hole). 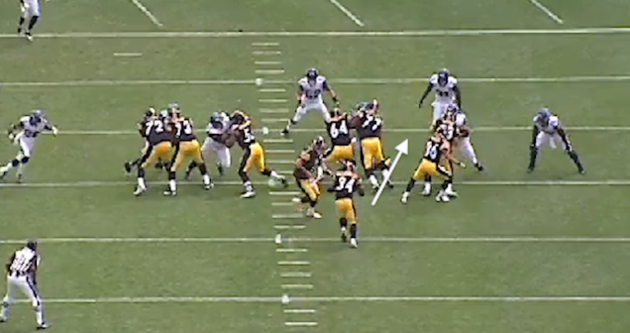 So, Mendenhall decides to bounce it outside, because, I'm guessing, he doesn't like getting hit by Kam Chancellor. You can see that below - Kam is doing his job, creeping in to fill the hole, and curiously, Aaron Curry is gearing up to hit Hines Ward and blow up Ward's block instead of keeping track of the ball carrier. 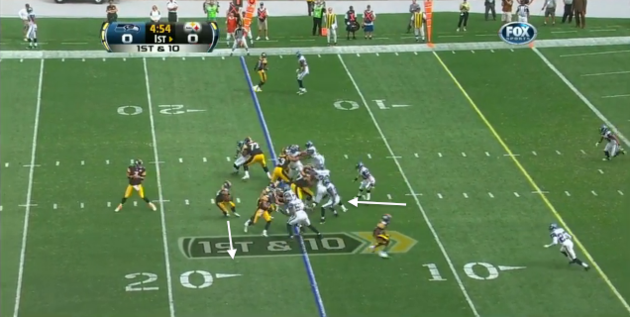 Below, you can see Mendenhall break it outside, and again, curiously, the containment player to the strongside, Aaron Curry, never even sees him run by. You can see Curry's head just down into the chest, almost, of Hines Ward. 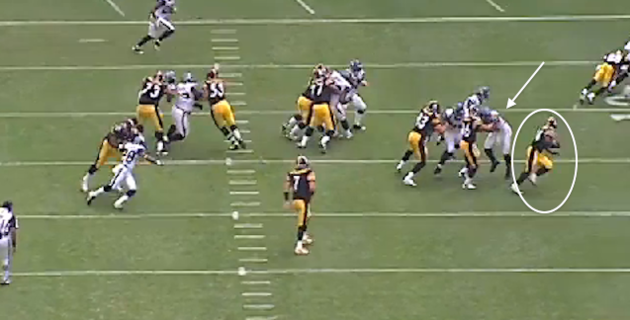 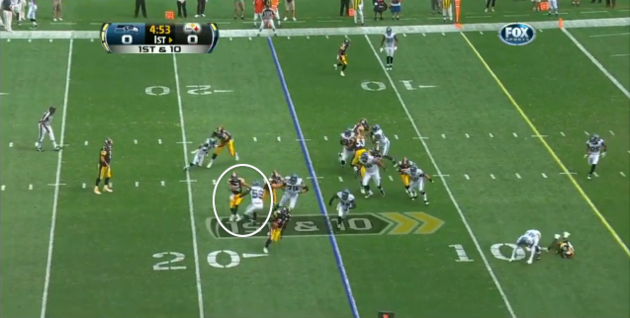 Mendenhall picks up 11 on the play after Marcus Trufant manages to get off of a downfield cut block to make the tackle. So. That's not how you play contain as a Sam linebacker and again, I'm not piling on, but that play just has really stuck with me for it's sheer terribleness.

Now - fast forward to Saturday, and let's take a look at a couple of plays that Mike Morgan made. I'm not going to say that Morgan has excellent instincts or will even make the final roster, but I just thought that the Curry play above acts as a good contrast to some things the former USC Trojan was able to do. Morgan is securely on the roster bubble, but he did make a few plays that should keep him on the coaching staff's radar and in the hunt for a roster spot. Exhibit A:

You can see the Seahawks are in their base 4-3 in what looks like a variation of their Under front, though in this case, Morgan is aligned on the weakside, as strong safety Jeron Johnson fills in off the tight end to the strongside. Greg Scruggs is at the 5-tech, Clinton McDonald to his right aligned at the nose tackle spot, then Pierre Allen, I believe at 3-tech, and Bruce Irvin at defensive end to the strong side. 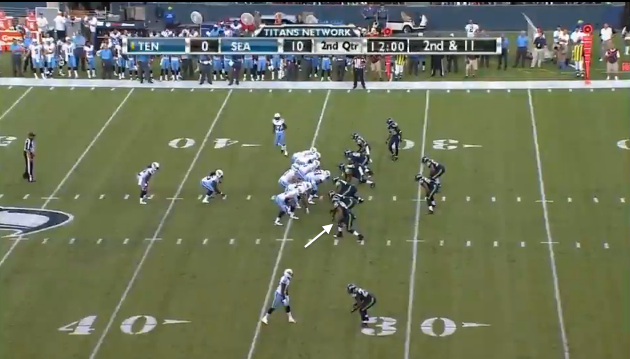 Jake Locker executes a play-action fake to Chris Johnson and then hands off to Lavelle Hawkins for the end around. 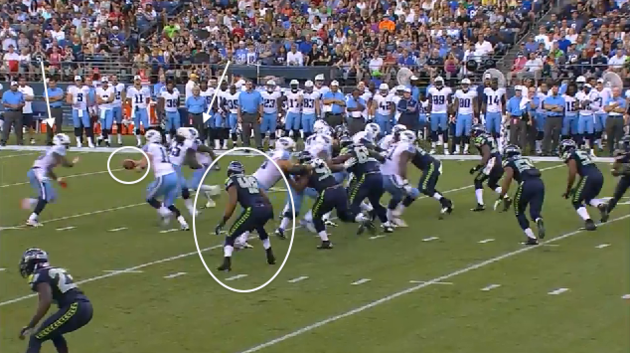 You can see Morgan stay home on his side after diagnosing the end-around. The Titans, otherwise, have done a pretty good job setting up the play, and Hawkins just has to beat Morgan to get to the second level and pick up a few yards. 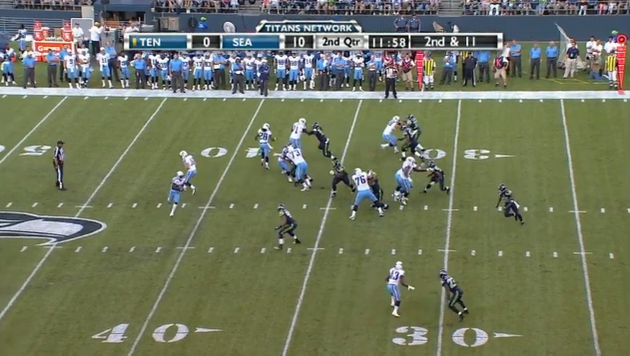 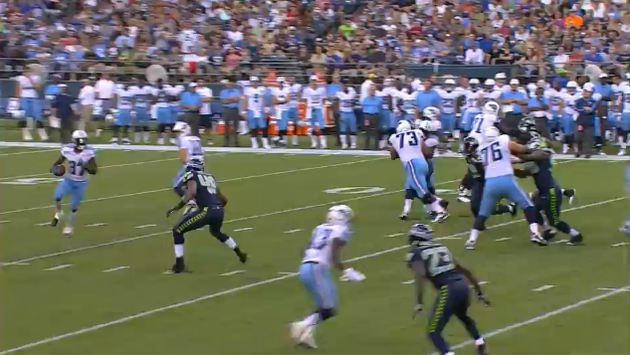 Morgan does a good job of spilling Hawkins back outside and then makes the tackle for a loss of nine yards. Good instincts, good athleticism to bottle up the run. 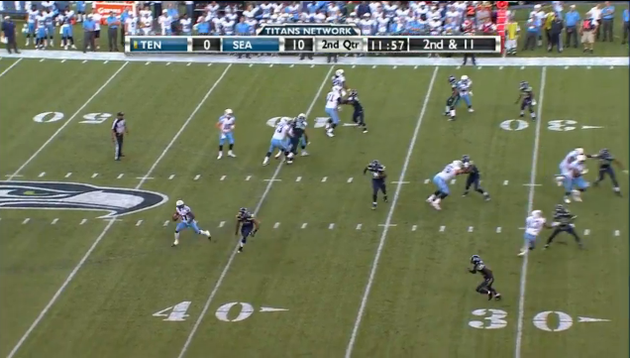 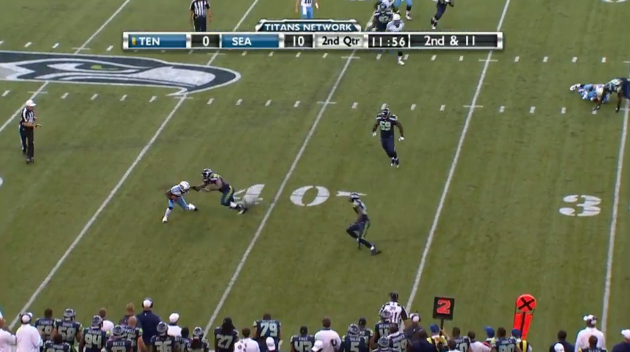 The second play that caught my eye has probably been overlooked because it was a little bit tough to see how great of a play Morgan made.

The Seahawks come out in their nickel defense (Trufant in the slot), with Mike Morgan on the strongside. Jake Locker and the Titans have three wide and are in 2nd and 8 from the 14 yard line. The ball is snapped and Morgan drops back into his zone, keeping eyes on Locker while tracking TE Taylor Thompson releasing out into a route.

As Thompson runs past, Morgan sits down in his zone and sees that Locker has been flushed from the pocket. 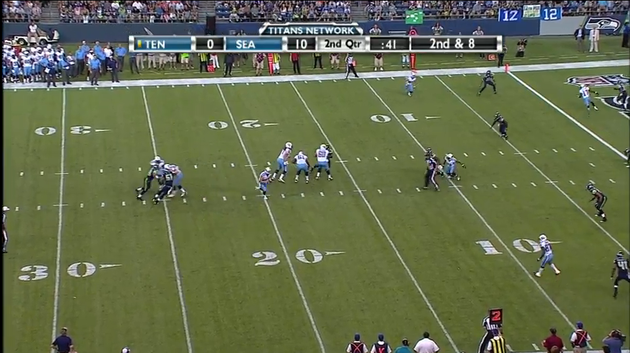 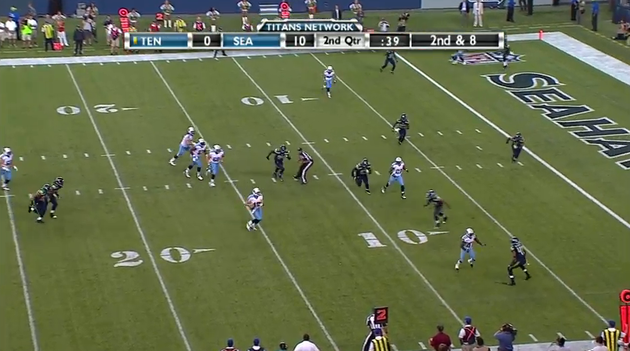 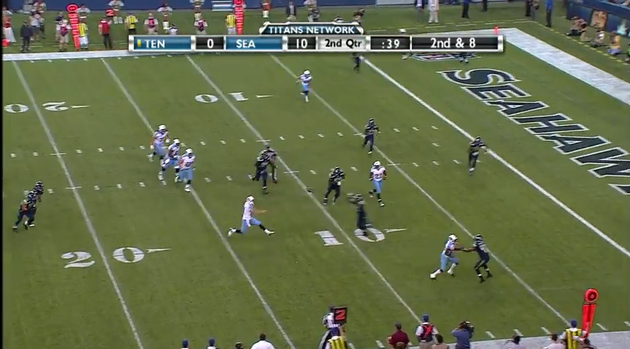 Below, you can see that Thompson actually had a pretty good angle on Maragos and had the ball not been tipped I'd say there was a pretty good chance this is a completion for a touchdown.

You can see that the pass deflection makes the ball wobble and trail off-course toward the right. 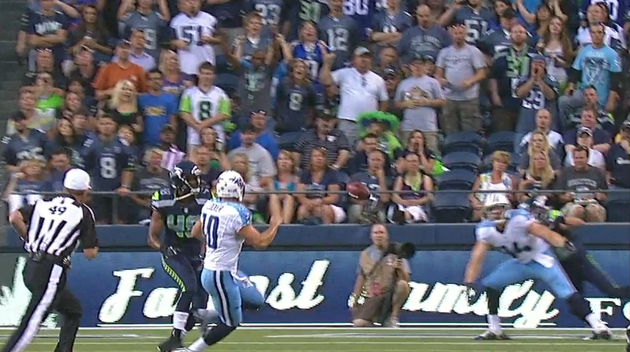 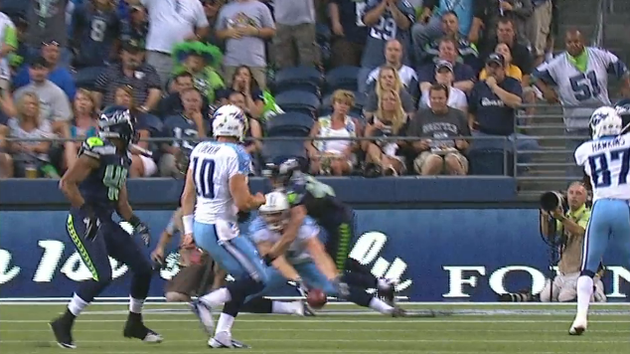