The Seahawks will see three series of Peyton Manning and the Broncos' 'first-team' offense and that will be fun, but it should actually be more interesting to see how Seattle's offense fares against Von Miller and the Broncos' attacking defense. Denver's front seven can be fairly dynamic, and they racked up six sacks in their matchup with Chicago last week. Now, the Bears weren't exactly renowned for their ability to protect the quarterback last season and expectations are that they'll improve this year with Mike Tice coaching them up and someone not named Mike Martz in charge, but it will be a good test for Tom Cable's offensive line unit to keep Matt Flynn upright and Russell Wilson in the pocket.

Rookie G J.R. Sweezy was very impressive last week - surprisingly so - and I would guess that he'll be seeing a good amount of snaps during the first half. He's one to watch, and compare what he's able to do with Deuce Lutui and Rishaw Johnson when you're watching. I thought that Lutui was still a ways away from being a consistent, starter-quality lineman on the right side and that's probably due more to his familiarity with the system. There were a few plays where he was on the ground last week, and I saw him miss a block or two at the second level. I still think he might be a really good option as depth on the line, but if he doesn't look significantly better than Sweezy and Johnson he could be fighting for a roster spot.

Regardless, it will be interesting to see if the Seahawks offensive line - particularly the first-unit - can open up nice holes for the run game - I mean, just dominate, like we saw on a few plays during the Seahawks' first drive last week. See below: 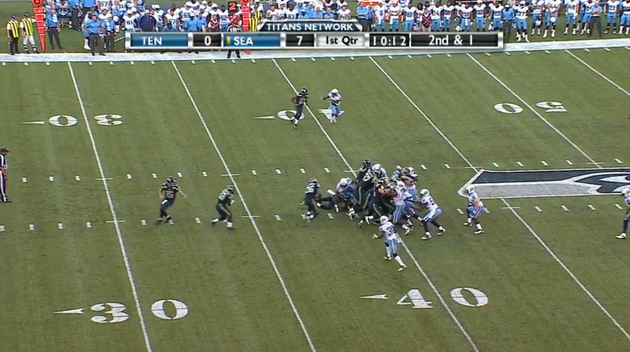 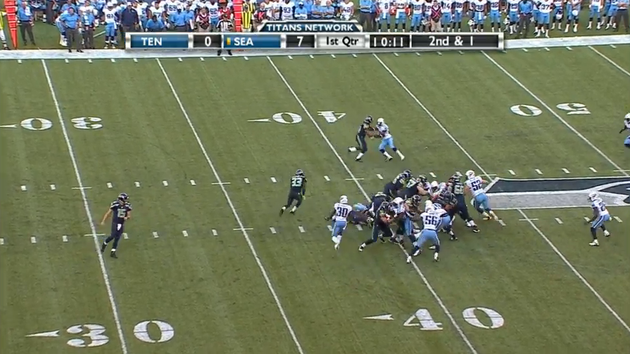 I mean... damn. Look at the running room there.

I'm hoping to see the second- and third-team line progress in their ability to work together and avoid penalties, and keep an eye on Leon Washington throughout the game - he looked really, really good against Tennessee. He still looks to be ahead of rookie Robert Turbin and if he could be used more in the run game more, his value would skyrocket.

On the defensive side of the football, I'll be keying in on some of the in-flux positions like nickelback and middle linebacker. Marcus Trufant will get the start this week at nickelbacker - and that means he should get a lot of snaps.

In-line with what we've been talking about a lot lately, the idea of a 'nickelback' being a de facto 'starter' held true, as the Seahawks went to their nickel formation 14 times in the first half last week, compared to 15 times in their base 4-3 (10 in 4-3 Over, 5 in 4-3 Under). A nickel back and/or the varying sub-package players (big nickel, dime defensive back) are likely to see a large amount of snaps this year so these aren't just 'nice depth' or 'backups'. They're players that Gus Bradley and Pete Carroll really must depend on in a lot key situations, especially on the most important down - 3rd down.

Watch for Jeremy Lane, Philip Adams, and Roy Lewis. Winston Guy saw most of his snaps last week at just a strong safety position, but he could get more involved up in the box as a big-nickel type this week. DeSean Shead is a 2nd half player to keep an eye on, along with Jeron Johnson.

I won't actually be able to watch the game live today - I have a buddy's wedding to attend, but this should be another really interesting game to evaluate. I haven't even talked about the quarterbacks at this point, because well, you know about all that already.