There's a large contingent of Seahawks fans that hate the Denver Broncos, so if you are among them: Congratulations! Because Seattle basically just went down to Denver and dominated, especially in the second half with Russell Wilson putting on a show against the Denver backups. Overall though, this was all Seattle.

Even though it was a preseason game, consider the fact that the Seahawks saw an entire half of Peyton Manning and they finished the first half down 10-9 on the road. Kam Chancellor only played one quarter. The Broncos only touchdown of the game came after a blocked punt (I've got to admit this mistake, INT came after the punt), giving Manning a short field and then Seattle stuffing Willis McGahee on 1st and 2nd down until he finally got through on the third attempt. Meanwhile, Seattle got itself into scoring position three times for a field goal with Terrell Owens dropping a sure touchdown.

Seattle "won" the first half in many respects and then absolutely dominated the second half when Wilson went to work while the Seahawks backup defensive players held the Denver backups scoreless. If there was anyone that wanted Seattle to draft Brock Osweiler over Wilson, I'm sure that they don't exist anymore.

The Seahawks really dominated this game in almost any respect:

Seattle was 2 of 2 on fourth down.

Three turnovers compared to one.

About 40 minutes of time of possession!

Yep. Preseason stats are always taken with a grain of salt, but regardless of that, we can feel good that Seattle played their game and found out that they might just have two good quarterbacks on their hands. They also faced a Denver team that went to the playoffs last year, replaced Tim Tebow with a Hall of Fame QB, and held their own in the first while dominating the second.

Indeed, this Russell Wilson kid is getting very interesting.

Some player recaps after the jump...

Terrell Owens - Basically the worst case scenario I could think of. He had five targets by my count and caught zero of them, either because he seemed to be on a completely different page than Flynn or because he can't catch a perfectly thrown pass in the end zone while he's wide open. Is it a concentration issue? It's some kind of issue. I doubt that Owens will get dropped immediately because of it, but he didn't do anything to win a roster spot today.

Matt Flynn - He finished the day 6 of 13 for 31 yards, 0 TD and 0 INT. But I'd say that he did what he had to do to win the starting job and showed some very impressive things. There are official 50 yard passes and then there passes that fly 50 feet in the air and land perfectly. Flynn had the latter. He had a great rollout for a first down run. He was under pressure and made a great decision in his throw to Cameron Morrah. He had seven incompletions and remember that five of those were to T.O. who either dropped one, had a great one batted down by Hall of Famer Champ Bailey, and was never on the same page as Flynn. I'd even say that some of the plays felt forced as if they just wanted to get Owens involved. I'm not saying I blame Owens for everything, but he probably is the reason that Community was moved to Fridays with Whitney.

I still think that Flynn will be named the starter but I'm less sure now. I want to see Wilson play against the first team defense.

Russell Wilson - He finished 9 of 16 for 155 yards, 2 TD and 0 INT. His total preseason stats are now 21 of 32 for 279 yards, 3 TD and 1 INT. He overthrew some guys, but this guy is so elusive. He was under pressure all day and was impossible to take down. He made a completion while getting sacked, even if it was a little bit of luck it would be hard to do that without having a little bit of skill. There's something about Wilson that seems to be very special. I think that Flynn played well enough to win while Wilson is going to win over the hearts of the Seattle faithful because he possesses the "WOW" factor. He can run it, he can throw it, he can create.

But can he do it against a real defense, because the Broncos backups looked pretty terrible against all of the Seahawks. Things can change when you play a real defense that's a little faster, a little smarter. Either way, there's going to be a growing part of the NFL experts that are going to start saying that Wilson is the clear-cut third best quarterback in the draft as of today. I'm excited. It's okay to be excited. I'm really trying to hold back because it's preseason, but the skills are apparent.

Manning finished the day 16 of 23 for for 177 yards, 0 TD and 2 INT by playing the entire first half. At times he looked like classic Peyton, dicing up the defense and doing whatever he wanted. But his two interceptions were just bad passes. The one that he threw very close to Red Bryant and then the duck he threw right into the lap of Jeron Johnson. I think that Richard Sherman did a phenomenal job on Demaryius Thomas while Eric Decker was able to do some things against Brandon Browner. I think the secondary did okay but the defensive line provided no pressure.

Look how high Red gets! 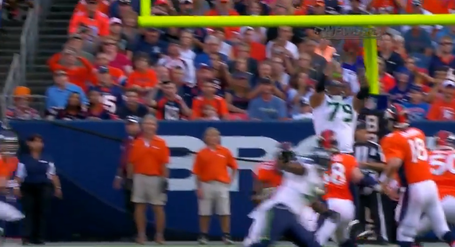 There were no sacks on Manning and he seemed to have time in the pocket as well as open spaces for his receivers to run through at times. Definitely the number ones on defense, like Bruce Irvin, Jason Jones, Chris Clemons, the Professor and Mary Ann (aka "the Rest") have some work to do.

Teams that get sacks win more games. It's one of the fundamental rules of modern day football. Seattle worked to improve their pass rush over the offseason but it didn't show at all today in the first half.

Marshawn Lynch - 5 rushes for 32 yards were his numbers. I think that Lynch flashed those same skills that make him one of the best running backs in the NFC. It would be really hard to lose him for any amount of time.

Robert Turbin - Though Turbin definitely did do some nice things. Turbinator had 5 carries for 16 yards in the first half, but also saw 8 or 9 of those yards come on a run through a major hole in a 2nd quarter run. He had one run where he broke a couple of tackles and that's what you like to see, but otherwise he was stuffed.

Russell Okung - Maybe he got beat a couple of times by Elvis Dumervil, but Dumervil is one of the top pass rushers in the NFL and this is a preseason game and Okung has played less than two years of actual game time. We have to get over looking for the next Walter Jones and just accept that very good left tackles allow some sacks against elite pass rushers. We have to start getting used to having a great left tackle (potentially) that doesn't just shut every single opponent down. Jones is maybe the best offensive lineman ever. Ever. Okung is looking very good and very important. He's one of the most important players on offense. 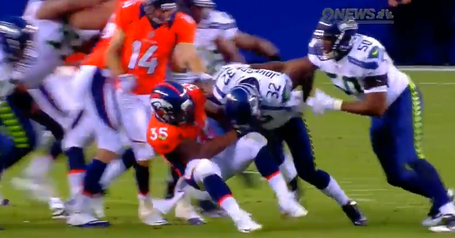 He also did something that Terrell Owens didn't do: Caught a pass. Chancellor only played the first quarter, presumably so that Seattle could get a better look at Johnson. I couldn't say exactly what he did in coverage but if you force a fumble and have an interception, you're doing something good. Couldn't say the same for Winston Guy who got beat on ST for a blocked punt in the first. Also, Chris Maragos with the hit on Bubba Caldwell. Is Guy this years Mark LeGree?

Bruce Irvin - Mostly what I think people will classify as a bad game. He did touch Manning, and he'll never wash that hand. Irvin was drafted as a bit of a project, there's a lot of learning to do. He's not expected to play a ton of snaps this year but hopefully the pass rush just keeps coming along positively for this season.

Deon Butler - Reports in camp were that Flynn and Butler were hooking up a lot (wink wink) and it showed tonight. After the Owens drop, they connected twice in a row. He seems to be Flynn's safety valve and that could secure him a spot on the roster.

Leon Washington - I think there's some question on whether or not Washington should be a cap casualty. He had a big punt return in the third quarter. He had some nice plays on offense. He showed that he's not an every down back but that he's important as a change-of-page pace back and special teamer. I'd say he's safe, if there was any doubt.

Backup Wide Receivers - A quick note as Phil Bates hesitated on what could have been another long Wilson touchdown pass while Lavasier Tuinei impressed. I'd say that the end of the roster as it comes to wide receivers showed itself a little bit today. Tuinei is ahead.

Okay, that'll wrap the quick wrap. What did you guys think?