After two games and eleven drives, Russell Wilson has led the team to five touchdowns, one field goal, one interception, and four punts. 38 points is not too shabby either.

Against Tennessee in preseason week one, the Seahawks called five designed rollouts out of 19 passing snaps, and versus Denver last week, they only called one designed rollout in 25 snaps. Against Denver, Wilson was under mega pressure - I counted on 11 pressures in the 25 snaps - and I can see why Pete Carroll would want to give Wilson reps with the 1st team offensive line, to see how he does when he isn't running for his life. Let's go to the tape - on those 11 pressures - Russell responds in four different ways:

(A) Scrambles left side - he did this twice: once for 11 yards and once for 6 yards.

(B) Scrambles up the middle - he did this three times: once for 4 yards (while evading three potential sacks), once for 7 yards, and once for 6 yards on 3rd and 5, while the Seahawks were trying to drain clock.

(C) Rolls right - he does this five times: throws two out of bounds, throws two to Cameron Morrah that fall incomplete, and throws one to Lavasier Tuinei, though he was trying to throw it out of bounds. Gets a first down anyway.

(D) Gets sacked, this happened once and was hard to avoid for any quarterback.

Not one time, in two games, has Russell Wilson stepped up and climbed the pocket under pressure to throw the ball. Something to keep in mind.

Wilson was in shotgun eight times of the 25 snaps and went play action 13 of the 18 times he was under center. Rarely does he take a normal drop without faking a handoff.

Wilson converted seven of eight third downs when he is dropped back to pass. That is pretty good. He converted some easier ones - two third downs and second downs with short passes and another 3rd and 2 by getting Denver to jump offsides. He converted a 3rd and 4 with his prayer to Tuinei. He converted a 3rd and 5 by scrambling for 6 when they were trying to run clock. He also threw into the bleachers on 3rd and 5 earlier in the game. He converted 3rd and 8 in the redzone (3rd and goal) with the play action TD to end his night with a nice pass to Cooper Helfet. He also hit Anthony Mccoy for 26 on 3rd and 17 on his initial TD drive in the 3rd Quarter.

The three plays I keyed in on were his touchdown pass to Cooper Helfet and his seam passes to Jermaine Kearse and Anthony McCoy. Also, I liked his 22 yarder pass to Sean McGrath up the middle. All four passes were from the pocket - the pass to Kearse and Helfet were under play action. The other two were not.

So - to complement Davis' charting, I wanted to quickly break down the plays he keyed in on.

Seahawks in '11' personnel with Anthony McCoy set off the line in the slot, and Wilson in shotgun, flanked by Kregg Lumpkin. After a couple of penalties, the Seahawks are backed up into a 3rd and long. 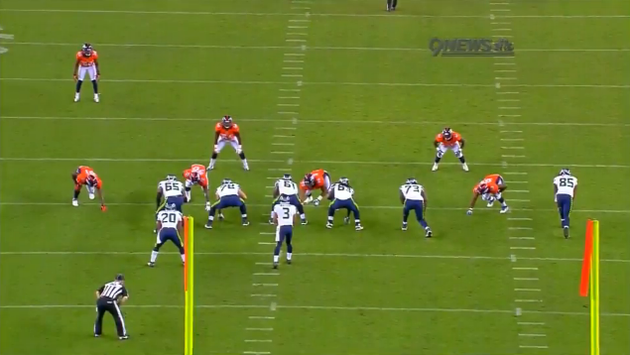 Ball is snapped and McCoy runs a seam route, swim moving the Sam linebacker to his side to release down the middle. Great protection for Russell, and Lumpkin draws the Mike up a bit as he anticipates a dump off. This leaves the deep middle of the field completely open, as the safeties are preoccupied with the three-wide set. 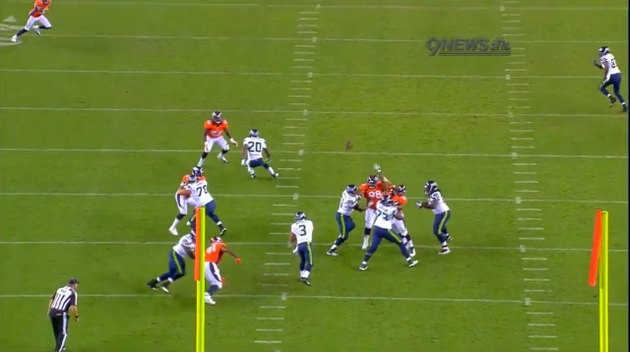 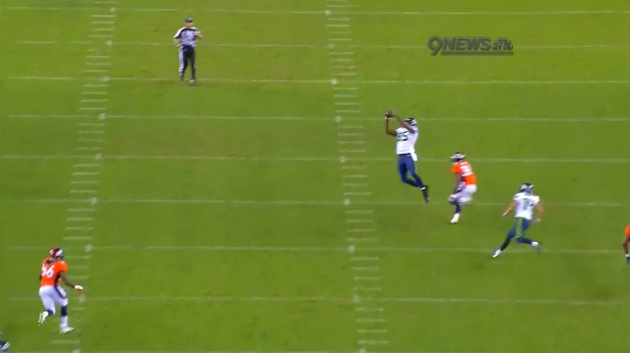 Great catch by McCoy and a big first down. The Seahawks would go on to score on this drive on a Lumpkin run in which McCoy set up a nice block on the safety to the playside to spring the running back down the sideline.

Nice little play on first down here. And pretty simple. Seahawks in '21' personnel with McGrath set to the right of the formation. 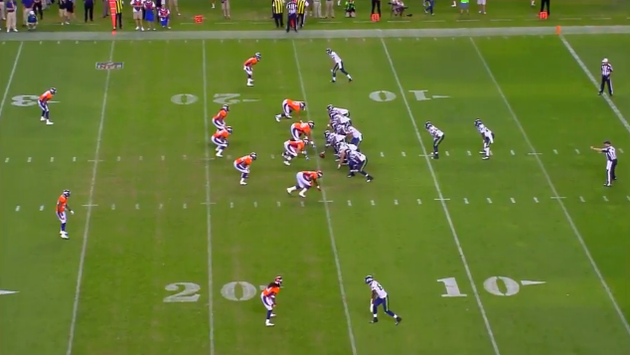 Ball is snapped, play-action. The play-action fake sucks the linebackers in for one step and that's enough for McGrath to sneak into the second level underneath the safeties. Wilson calmly just floats a pass into the soft spot for 22 yards. 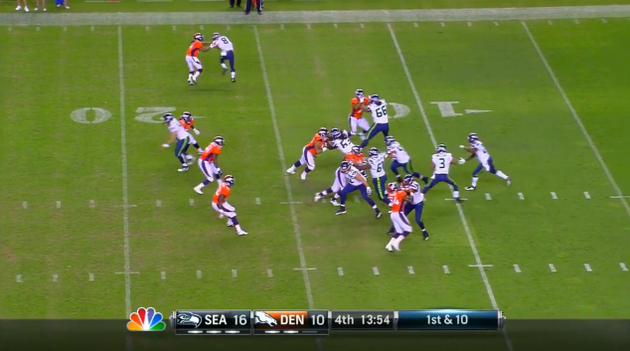 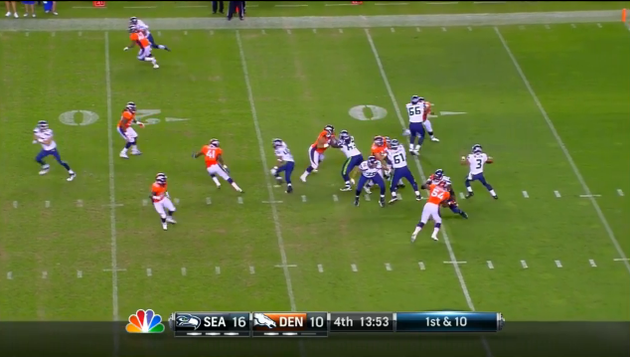 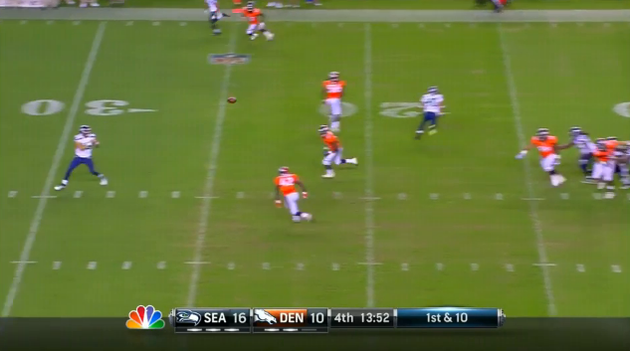 This play is a variation on the Sluggo seam route that Chris Brown broke down over at Grantland recently - it's a staple of the West Coast Offense and and, interestingly, Matt Barkley's favorite play - "Solo Personnel. 'Z Mo to Trouble Right 82 Stay Sluggo Z Win.' On Two. TD." In that piece, Brown explains why -

"To understand Barkley's answer, it's necessary to understand USC's offense. When Pete Carroll took the head-coaching job at USC, he hired longtime BYU assistant coach Norm Chow as his offensive coordinator. Carroll wanted the vaunted passing offense the Cougars had used for decades to topple superior foes and develop future NFL quarterbacks like Jim McMahon and Steve Young. To go along with that philosophy, Carroll also wanted to incorporate some of the latest NFL schemes, and his two young offensive assistants - former BYU quarterback Steve Sarkisian and a young Lane Kiffin - were assigned the job of bringing those ideas to USC.

"Kiffin in particular relished this task, spending long hours in the Tampa Bay Buccaneers film room with Bucs head coach Jon Gruden. Gruden was a student of the West Coast offense, the pass-first, timing-based offense designed by former 49ers head coach Bill Walsh. Kiffin absorbed everything he could about Gruden's brand of the West Coast offense, and quickly USC's coaches began meshing some of the latest NFL concepts with the core of their offense. After Chow left USC, Kiffin became co-offensive coordinator along with Sarkisian, before leaving to become head coach of the Oakland Raiders, Tennessee, and finally returning Southern Cal. During this time, Kiffin built a somewhat sordid reputation off the field, but on it, he continued to tinker with his offense.

"Among the plays Kiffin took from Gruden was one of the oldest, most reliable West Coast offense concepts: "sluggo seam," or, as Kiffin and Barkley refer to it, "82 stay sluggo Z win." Sluggo seam has long been one of the best home-run passes in the West Coast offense, so it is no surprise that Barkley would adopt the play as his own personal favorite."

"Sluggo," as Brown explains, is an old Bill Walsh term that's short for "slant and go." That's more or less what Jermaine Kearse runs here, and incidentally, it's what Terrell Owens ran on his now infamous dropped touchdown pass from Matt Flynn.

Seahawks are in "21" personnel here, two running backs and a tight end. Kearse is out to the right at Z, and Ricardo Lockette is at the bottom of your screen at X. 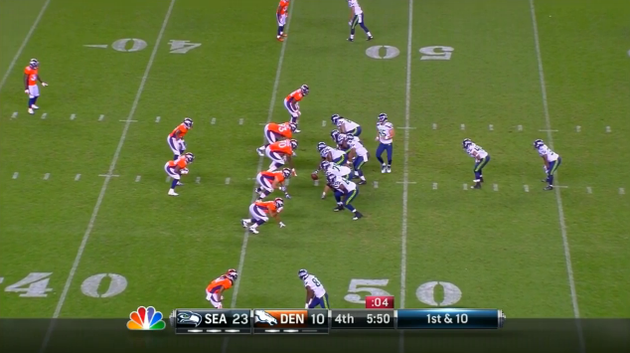 Ball is snapped, Seahawks run play-action. You can see this suck the linebackers up to the line of scrimmage. Kearse runs a slant - sort of like he's even going to the middle of the field to block for a run, then puts his foot in the ground and heads downfield. 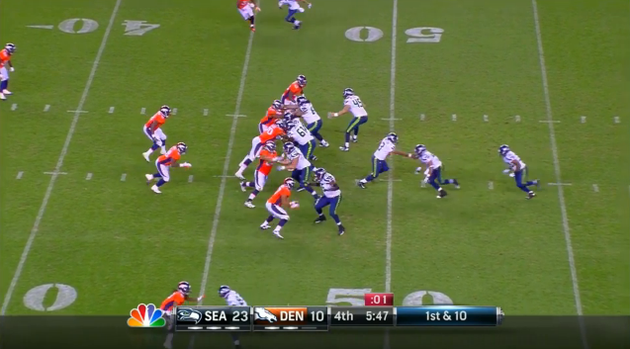 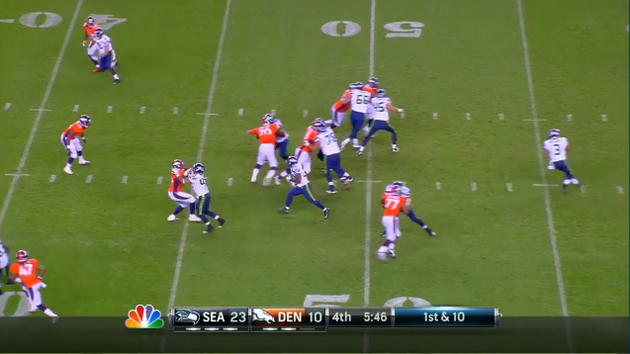 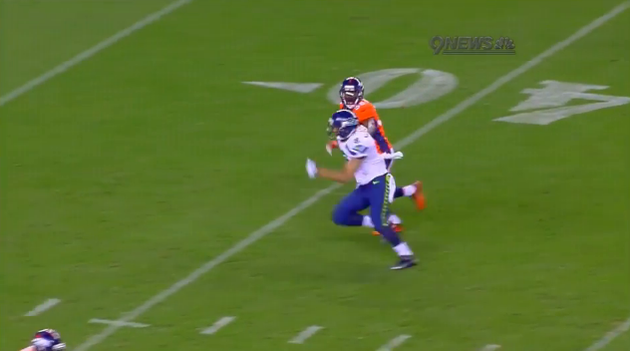 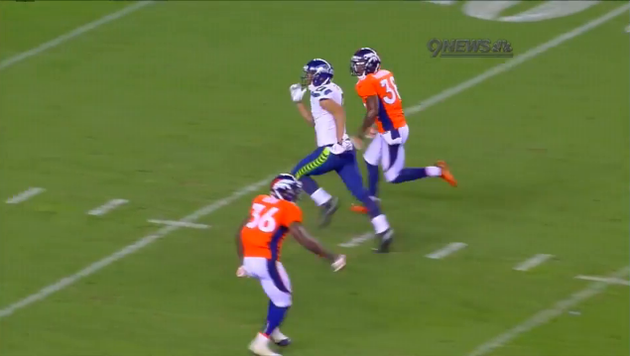 Wilson sees that the seam is open and Kearse has position on the cornerback. He throws it downfield from a clean pocket. 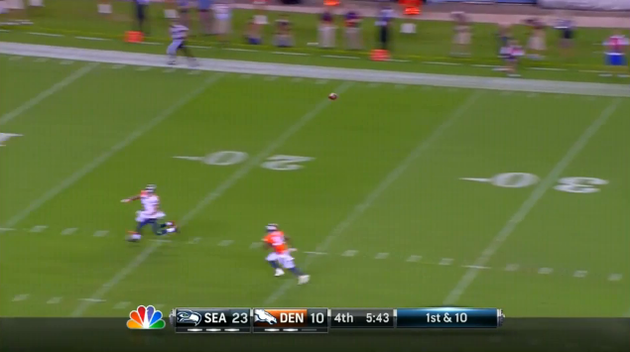 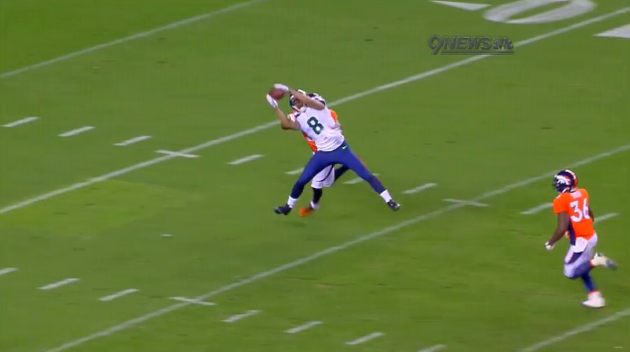 Nice catch by Kearse too.

Another fairly simple play here -- and Denver's defense, frankly, makes it pretty easy. On third and goal, the Seahawks run play-action once again out of '21' personnel. 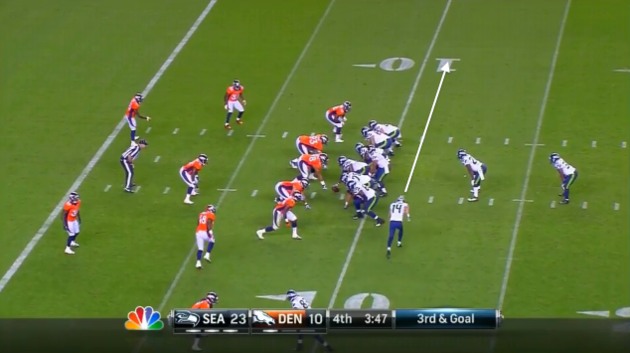 Charly Martin motions right and on the snap, Kregg Lumpkin lead blocks for Tyrell Sutton. The Martin motion to the right and tight split on the snap is a sign that defenses look for - in this case, it typically will mean a run play is coming. 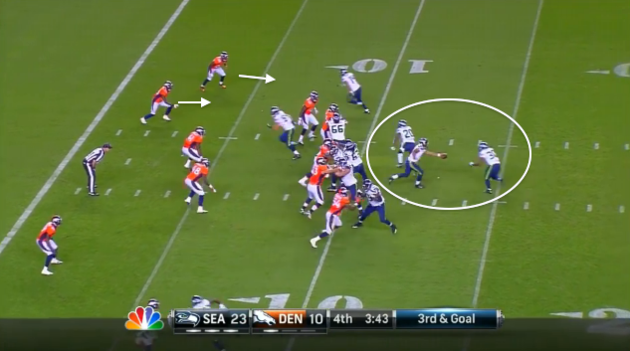 The play action sucks the Sam linebacker and strongside safety up a step nicely. Helfet slips past three Broncos and is home free. 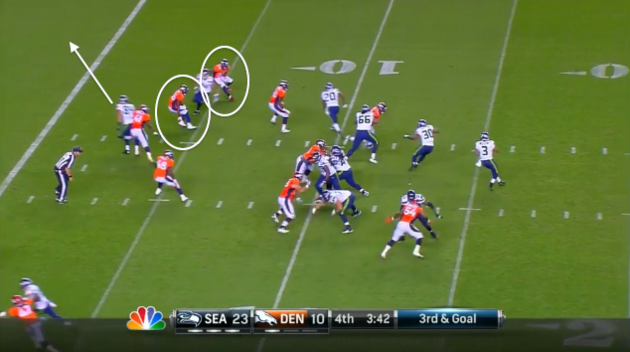 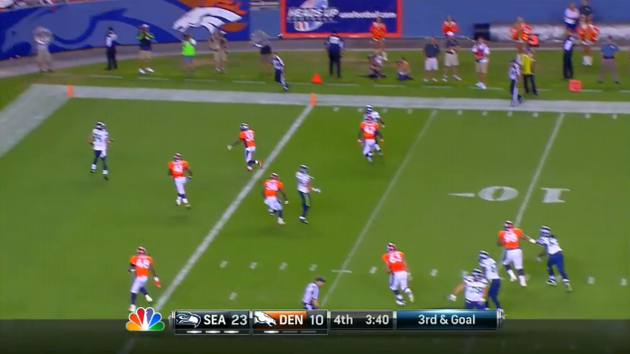 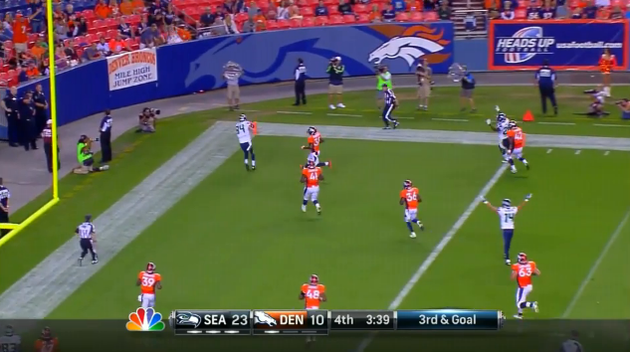