The Seahawks' History With the Scrambling Quarterback

Share All sharing options for: The Seahawks' History With the Scrambling Quarterback

I felt very concerned last Saturday night after watching the Seahawks game, and then the subsequent fallout of the "Start Russell Wilson" explosion that followed. What struck me specifically is that it seems the fans, as a whole, really like Russell Wilson's scrambling skills and his improvisational play-making ability. All the talk was about a guy who should start the third game and hell, start the season. I groaned; I gritted my teeth.

Look, Russell Wilson's scrambling is nice, but if an offense features that skill and leans on said skill, it's more of a hinderance than most realize, and I'm going to use some history lessons to try to make this clear.

The first QB the Seahawks franchise had was Jim Zorn, and he scrambled a lot in his career. The offense responded and the team over-achieved on the back of this ability for two consecutive nine-win seasons. However, after getting really emotionally involved in the first big QB shake-up, when Knox pulled Zorn for Dave Krieg, I started to wonder. I talked a little about this in a previous article, when I compared Knox's situation to Pete Carroll's - about how tough a call that is - but halfway through the season, with a 4-4 record, he pulled the plug on the only quarterback the Seahawks had known.

Jim Zorn lived and died by the scramble and an offense developed under that premise - and not under normal circumstances - as an expansion team. By the time you watched Jim Zorn in 1983, he very rarely set in the pocket, and it became even rarer to see throws over 20 yards because he didn't let plays develop enough before getting happy feet.

I had the opinion of the switch then that Knox just really was looking for a guy who could stand in, run the offense and let things develop. Sure, it's easy to say it's the right call there, but without the switch, the Seahawks don't grow enough and the following 1984 season, which saw them go 12-4 and reach the divisional playoff round, never happens.

I'm sure there are at least a few questions about how scrambling hurts an offense overall.

1) An offensive lineman's job is harder with a scrambler. While the skill itself hides inefficiency, it also doesn't allow a lineman to ply his craft normally. A simple example, on a seven step drop, a left tackle will change the angle of his shoulders and drop a bit differently than on a three-step drop. If you have a guy who moves around, and as often as Zorn was before Knox pulled the plug, it had to be terrifying for any OT on the depth chart.

2) Plays that go undeveloped hurt a play caller. There are many reasons a play will be called, and sometimes calling certain plays is about getting a defensive matchup you like. If the QB decides to panic or roll out - under duress imagined or otherwise - you have no idea if that play will actually work or not. This doesn't apply every time a scramble happens, but if it happens enough you can imagine how much a play caller would hate it.

3) Receivers don't develop either. Scrambling becomes a mess of route break-offs, inconsistent timing, natural communication becomes "whoever works into my field of vision."

4) An offense that features a scrambler is not nearly as productive as a conventional pocket passer. Zorn, in 8 games, had about 1,200 yards and 7 TDs. In 8 games for Krieg, he had 2,200 yards and 18 TDs. That's just one example, but if you look up guys who scramble very rarely do they pass well and most have maybe three or four seasons of solid or all-pro performance. The window on these type of QBs is much much shorter. than average.

This is the first example, but it wasn't the last time Seattle would deal with a scrambling QB as a significant starter. Rick Mirer came to town as the second overall pick in the 1993 Draft, and replaced the 6'7" flameout Dan McGwire. Mirer started all 16 games in 1993 and was reportedly instructed "Hey, your first look isn't there, pull it down."

He had significant holes in his game in addition to this instruction, but about four games into his sophmore campaign he was skittish, rocked on his feet, and had trouble cutting it loose. He leaned on the crutch of his legs instead of plying his craft as a thrower. Eventually seeing him shipped out in a deal that is roughly THE BEST TRADE EVER RECORDED, two first round picks from the foolish Chicago Bears.

The Seahawks would wander in the dark and then again be treated to a scrambler in Matt Hasselbeck, who replaced the inconsistent Jon Kitna. To explain Matt's first few starts in a 'Hawks uniform, a nickname was coined by one of my local radio DJs:

Matt wasn't skittish, but when things looked even a little iffy, he rocked his feet and panicked, often drifting outside his protection or breaking the rhythm of the offense. This eventually led to Holmgren benching him for Trent Dilfer. Matt would step in after Dilfer's achilies injury and own the quarterback spot until his last game, eight seasons later.

This didn't mean Matt learned to never scramble, ever, but it became more a last-resort move than the third response when the first two looks were bad. He dumped it to Shaun Alexander and Mack Strong more, and cut it loose with more trust for guys in one-on-one matchups like Bobby Engram and Koren Robinson.

Let me be clear as I wrap this up: I like Russell Wilson.

I think Russell has a bright future here in Seattle, but I would not start him this year, outside an of injury to Matt Flynn. The reason for that is because if he plays this year, there is a significant chance that he begins to lean on his running skills and that this dependency slows or even regresses the growth of his other skills. For now, I'd like him to learn the pro game properly, with no pressure, and let his game grow.

I feel like everyone sees him run and sees zero risk, except for the occasional "Oh yeah he could take hits and get injured maybe" person and so I just had to help paint a broader understanding of that crutch, to complement and frame the "wow" impression that's circling right now. I know you guys like numbers so here's a list of the generally accepted top three 'scrambling QBs' in the last 20 years.

Donovan Mcnabb: Only twice in his thirteen seasons did he eclipse 25 TDs passing in a season; in three other seasons he surpassed 20 TDs. This highly respected QB, by many fans, only hit 30+ TDs one time as a passer and that's his now infamous season with Terrell Owens. Also, significantly, that year marked the only time he was over 60% completion rate of his passes by significant margin (64%).

Michael Vick: Though he's electric as a runner he's often injured and only in 2010 did he crack a 60% completion percentage, and despite that he only threw over 20 TDs twice in his career, (21 in 2010).

For reference, here are their numbers for their best seasons: 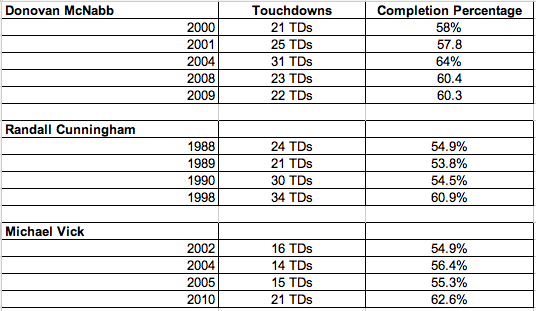