"Anthony has been a really great prospect and this was a really great pick for us a few years back. He's really grown into a versatile tight end for us; he's one of our best blockers - he's not quite to Zach's level, but he really does a great job with all the in-line blocking, he moves around well, he's a great target to throw the ball to. Anthony's got a big basketball background and he does have really good hands, but there's been times when he's been coming up, and getting ready to play NFL football, when he hasn't really been keeping the concentration that you need to catch the football. But, he's on it now. His attitude that he brings, and his effort everyday is just really, really positive. I've never seen him so full of the spirit and the mentality that he has, and it's infectious. He's been a real good factor for us, and I'm really excited for him. I've been around him a long time now, so it's good to see him at his best this far into his career." -Pete Carroll, from his post-practice press conference on Wednesday.

Anthony McCoy is a bit of a polarizing figure for Seahawks fans and he is best known for his frustrating and glaring dropped passes. He had five drops last season on less than 30 targets, an awful percentage, and because of this there are many that believe the Seahawks should just cut bait with the former sixth rounder and move on with Zach Miller, Kellen Winslon, Cameron Morrah and/or Sean McGrath. We've talked about this idea a good deal in the commentary recently, but I wanted to write a little bit about it formally because I think it's actually more important than people realize. McCoy gets a sort of similar treatment that Zach Miller has - in that, because he's not catching many passes, he's been deemed a disappointment, or even a bust, both nationally and locally. Now, when you've got a tight end that's being paid as much as Miller is, you'd like to see him as a dual-threat weapon that catches 50 to 60 passes and 5 to 7 touchdowns a year (like he was on track to do in Oakland), but the truth is, Miller was an integral piece of the Seahawks' offense last season and it boils down to his elite-level blocking abilities. Watch Zach Miller block a defensive end. Watch him cut across a formation and block away from playside and completely take away pursuit from that side. Watch him move to the second level and seal a defender. He's really, really good at it.

There were very, very few plays the Seahawks ran in 2011 with no tight ends. A vast majority of their personnel groupings called for at least one tight end and many times, two tight ends. Miller was often used as a Y tight end, aligned in-line with the offensive line and able to release into pass catching routes, block in pass protection, or fill various roles in run blocking. As good as Zach Miller is at all these things - he's elite as a blocker, and that's why Tom Cable loves him. The problem though, is that Miller has had some trouble with concussions and I think it's a bit optimistic to think he'll play 16 games in 2012. We can hope for that - but let's not bank on it. So, the question then becomes, who fills in for Miller if he misses a game or two, or more, in 2012?

Kellen Winslow is a Joker tight end, a moveable chess piece, and though he displays a high level of effort in blocking, he's more of a big wide receiver than an athletic and versatile true tight end like Miller and McCoy. Cameron Morrah is a bit of a tweener - more athletic than maybe any tight end on the team but not particularly known for his blocking ability (though he does do a very good job on his crackback cut blocks in motion across the formation). Sean McGrath is an interesting prospect as a 24-year old undrafted free agent, but he's still very raw and doesn't have the athleticism of his main competitors for a roster spot.

So, say you decide to cut bait with the project that is Anthony McCoy, and you're left with Zach Miller, and two Joker tight end types in Winslow and Morrah (or) a rookie UDFA with average athleticism but some promise. Miller gets concussed. Darrell Bevell will then look down at his playsheet, at the start of the week (bad) or mid game (much, much worse, considering the gameplan is already in place), and have to throw out, pare down, or at least lose confidence in 1) all his pass plays that require a blocking tight end who's called on to fend off a speedy, athletic and powerful defensive end that's out to maim your most valuable asset on the roster, and 2) pare down or eliminate some or all of your run plays that require a key block from a tight end.

Let's assume Zach Miller stays healthy - which we can and all do hope for, and the Seahawks trot out "run-formations" with Anthony McCoy and Zach Miller on the field together, both good/great run blockers, and run the ball well. When the defense brings eight or nine into the box to counter this grouping, you can leave McCoy in to block, something that he what he was lauded for all along, going back to his days at USC (he wasn't targeted in the passing game much with Fred Davis and Dominique Bryd also in the picture there), and then send Zach Miller out on routes, something we haven't gotten to see enough here. You can send both tight ends out, or keep both in. Cut McCoy, and you're almost guaranteed to see Miller become that almost de facto 6th offensive lineman again this season as he's called upon to be a key blocker.

This is why, despite the history with drops, Anthony McCoy is still on the team. I'm not going to say that he'll somehow develop into a top-tier dual-threat tight end, but he has a lot of value as Zach Miller's backup and a lot of potential as that dual-threat if he can get the dropsies under control. The Drops (not related to The Bends) is, in some cases, a correctable problem and it's important to point out that this is a new issue for McCoy. He didn't have this issue at USC and this leads me to believe it's a concentration problem, as Carroll points out above. McCoy is still only 24 years old, and is a low-risk investment with a high potential for returns. Personally, I'm hoping the Seahawks see him this way as well.

Now - much of this was actually written in my head or in the commentary section following the preseason week one matchup with Tennessee where Anthony McCoy had two catches, one for a first down, but one egregious drop that would have been another first down. This drop seemed to be the last straw for many fans, and I can understand why. These drops are drive-killing, momentum-killing, and demoralizing. That said, McCoy has had a strong camp and had an even stronger game in preseason week two against Denver. We broke down Russell Wilson's seam throw to McCoy earlier in the week, but I wanted to highlight a key block that McCoy laid down to spring Kregg Lumpkin to a touchdown run. It's a highlight of course, but it illustrates McCoy's upside as a dual-threat TE when combined with his catch for 26 yards that came five plays earlier.

First thing that's notable? Third down, in the red zone. This is a big play, in the sense that you'd love to get a touchdown out of this and not a field goal.

Below, you'll see the Seahawks in their '22' formation with Anthony McCoy and Cameron Morrah set tight left. Vai Taua is the fullback, and he'll lead block for RB Kregg Lumpkin.

There are four key blocks on this play, but Anthony McCoy's pancaking of S David Bruton is what springs the touchdown. And is what looked really awesome.

Ok, so four key things here - one - Cameron Morrah does a good job of absorbing the contain defender, which allows Anthony McCoy to move to the second level. Two - Vai Taua plugs the hole in which the Denver middle linebacker tries to sneak through and blow up the play. Three, C Lemuel Jeanpierre lays down a nice seal on the middle linebacker and cuts off backside pursuit, and then of course, four - McCoy manhandles the safety. 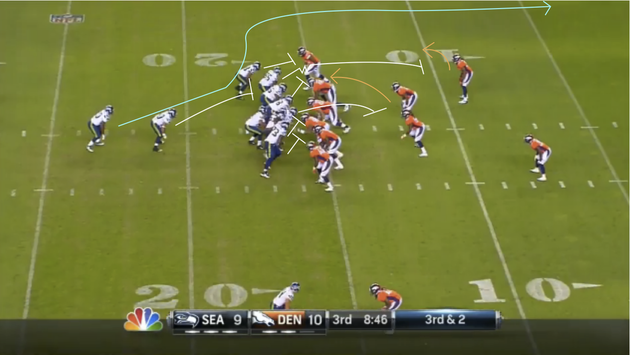 Ball is snapped. McCoy helps for a beat with Morrah while he blocks the contain defender, and seeing that Morrah has things under control, moves to the second level. This is one of the most basic tenets of the zone-blocking scheme, by the way. You can see Denver's sam linebacker making his way toward the line and Taua will meet him head-on. 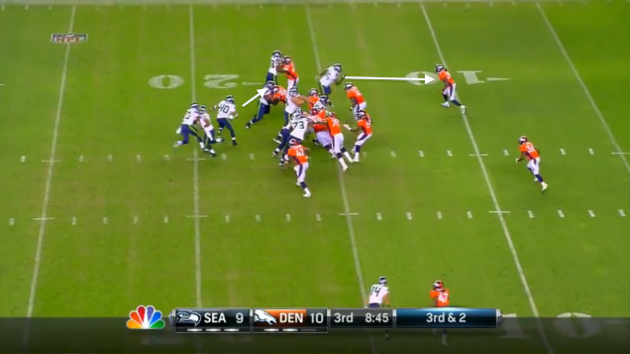 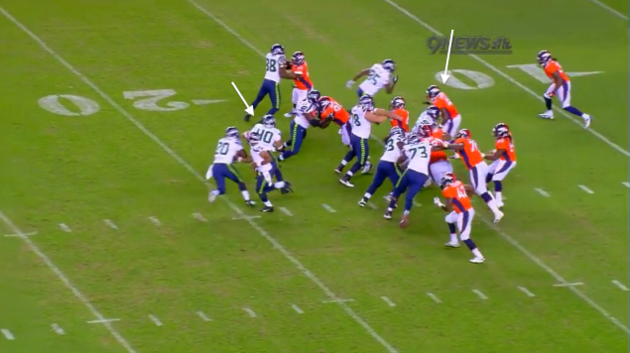 Below, you can see Lumpkin bounce the run outside as Taua plugs the hole. You can also see Jeanpierre engage the Will linebacker and Anthony McCoy engages with the safety. 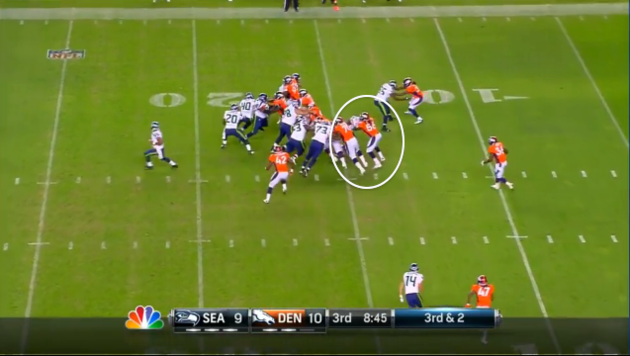 S David Bruton does the correct thing in getting outside of McCoy but McCoy simply shifts his weight and drives him toward the sideline, with the thought in mind that Lumkin can always cut up the seam behind him. This is another basic tenet of zone-blocking. 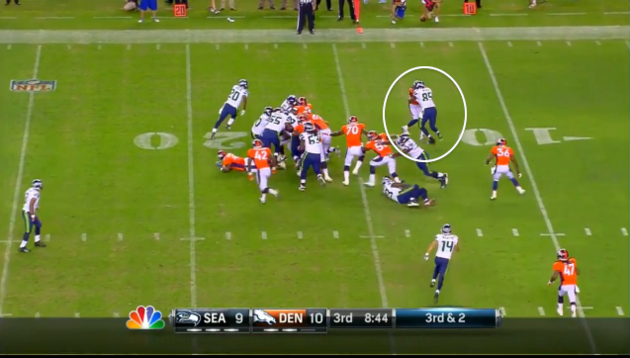 Lumpkin goes outside, but McCoy has Bruton off balance and throws him to the ground. 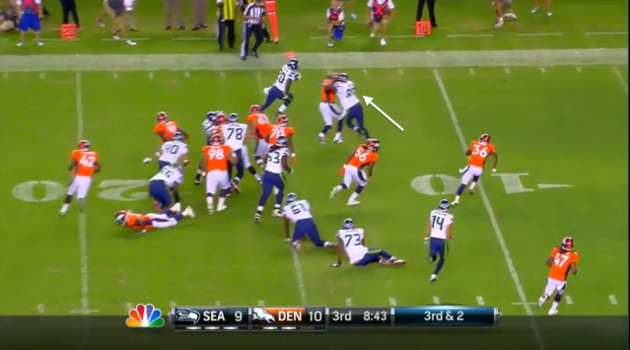 Below, I like to picture this live and imagine Bruton emitting something similar to the Wilhelm Scream. 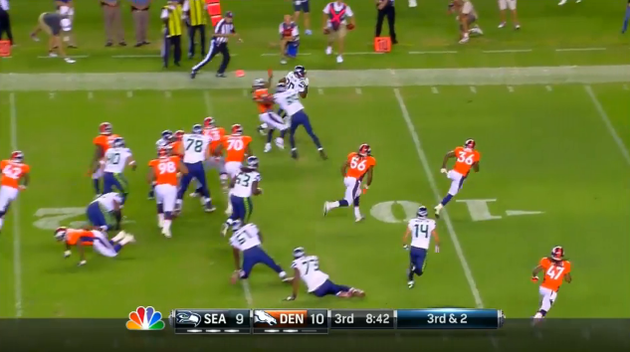 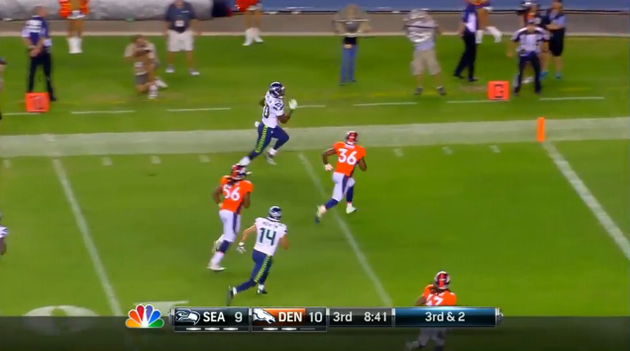 Lumpkin is home free. Great block by McCoy to follow up his impressive 3rd down catch up the seam. Again, I realize these are just highlights, but to me it's a nice illustration of what you have in McCoy as your 3rd tight end. Not many guys out there that are 6'5, 270 that can block, move around, and catch the football. Time will tell if he can develop into a consistent pass-catcher, but he's certainly on his way to becoming a very good blocker.