Getting the Seahawks' Backfield Involved In the Pass Game

Share All sharing options for: Getting the Seahawks' Backfield Involved In the Pass Game

Ok, so I'm going to try to keep the intro here pretty short because game time is quickly approaching and there's only so much I can glean from a couple of vanilla preseason games, but it occurred to me that I really think the Seahawks are going to try to get their running backs and fullbacks more involved in the pass game this year. The Seahawks are a run-oriented offense that likes to balance this methodical strategy with explosive downfield passes. Sort of similar to a boxer setting up a haymaker knockout punch by working the body, throwing jabs, and using the whole ring. There's an intermediate part to the passing game as well, of course, and in that I just have this hunch that the Seahawks are going to look to get their backs more involved to make it more dynamic, and to make their schemes more difficult to defend.

In total, that was 68 receptions for 479 yards and two touchdowns from the Seahawks' backfield, combined.

Those 68 catches made up 23% of the total completions that Tarvaris Jackson and Charlie Whitehurst (and Sidney Rice) threw. Now, is that about where the Seahawks want to be? Maybe. But I feel like that might be a tad low. I'm still not really sure how much latitude Darrell Bevell has in designing the schemes over Tom Cable and Pete Carroll, but I tend to think that both Tom and Pete would probably like to get Lynch, Robert Turbin, Washington and Robinson more involved this year. Carroll's tailbacks/fullbacks at USC were heavily involved in the passing game in their offenses during the 2000's, and the best examples are fullback Stanley Havili, who, from 2006 - 2010 had 116 receptions, 1290 yards, and 12 touchdowns in the passing game; Joe McKnight, from 2007 - 2009, had 66 receptions 542 yards, and of course Reggie Bush, from 2003 -2005, had 95 receptions for 1301 yards and 13 TDs.

Let's compare those 68 passes caught by the Seahawks' entire backfield last year to some of the league's best. Darren Sproles exemplified the 'dual-threat' type of running back and caught 86 passes for 710 yards and 7 touchdowns. Ray Rice alone had 76 receptions for 704 yards and three TDs. Let's not kid ourselves, Seattle does not have a Sproles/Rice type of back.

Let's look at similarly styled offenses - Arian Foster runs in a Gibbs-style zone-blocking scheme in a Houston offense that looks to Matt Schaub to balance out that run-heavy scheme with precision downfield passing to Andre Johnson and others. Foster caught 53 passes for 617 yards and two scores last year. Impressive.

Another offense that is stylistically and philosophically closer to Seattle than some people might think is that of the San Diego Chargers. This was an idea that Thomas Beekers has brought up to me over email (not just their offense, but their team in general) and I think it makes a ton of sense -- on offense, the Chargers lean heavily on their run game and Mike Tolbert and Ryan Matthews both played well last season. San Diego actually finished just behind Seattle in rushing attempts in 2011 with 436 compared to 444 for the Seahawks. As you probably know, the Chargers too like to throw the ball a little, and with big-bodied receivers in Vincent Jackson, Malcolm Floyd and newcomer Vincent Brown, they have a very explosive element to their offense. For intermediate stuff, they like to go to Antonio Gates, but they also switched things up a lot by heavily utilizing their backfield in the passing game with two very good pass-catching options in Mike Tolbert and Ryan Mathews. The two backs combined for 104 receptions for 888 yards and two scores through the air, and honestly it wouldn't surprise me to see the Seahawks strive for numbers like this.

More importantly, Tom Cable's 2010 Raiders got their backs heavily involved in the passing game as well - the backfield trio of Darren McFadden, Michael Bush, and Marcel Reece combined for 90 catches for 1,034 yards and six touchdowns that season. This ability to use your backs as an outlet or first-down maker extends drives and takes pressure off your run game. It's also notable that in that style of offense, the tight ends are heavily used as well, and Zach Miller actually led the Raiders in receiving that year with 60 catches for 685 yards and six TD. That's another discussion, but the point is that I can see the Seahawks leaning on Marshawn Lynch (underrated hands), Leon Washington (good receiver out of the backfield), and Robert Turbin (has shown excellent catching ability thus far) very heavily in 2012. Perhaps even Michael Robinson or Vai Taua. Something to watch for.

For illustrative purposes, I broke down four plays in which the Seahawks did just what I've explained above.

This play was actually the only designed rollout (bootleg) for Russell Wilson in the game (one other was called back because of a penalty) - something notable in that it seems they were trying to see what he could do from the pocket. This play will be heavy run-action to the left, with Cameron Morrah cutting back behind the line to lead block left. The Hawks are running out of '11' personnel here with three receivers. These types of tight splits, plus the down and distance of 3rd and 2, make Denver's defenders think 'run, all the way'. Or, I'm guessing anyway, I can't hear their thoughts from this distance.

You can see the blocking assignments below. 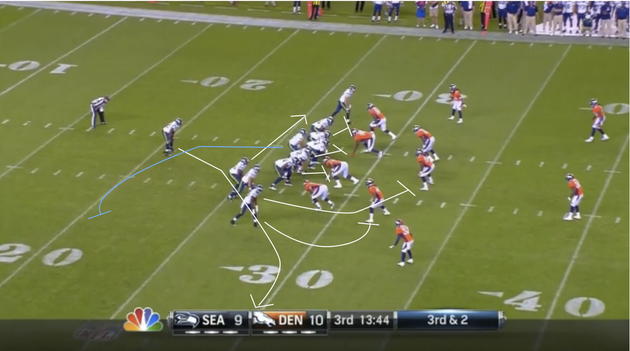 Ball is snapped, it's a play-action bootleg. 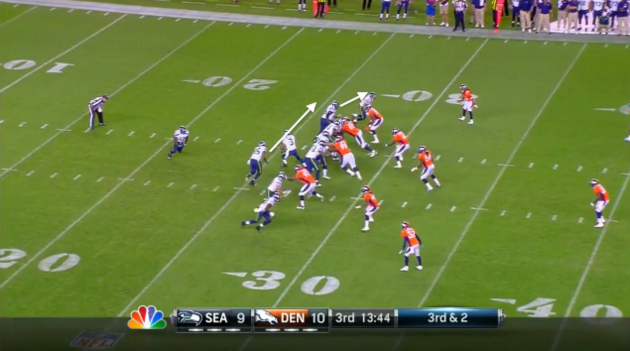 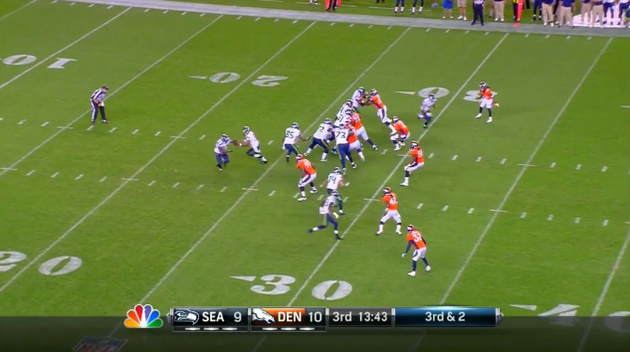 The play-action doesn't work super-excellently, but it does allow a solid release for Turbin and Russell Wilson is athletic enough to run and throw with the defense end to his side bearing down on him. This, really, is more the reason I believe the Seahawks value Wilson's mobility - at some point you're going to have to run by or juke a defensive end when the bootleg doesn't work. 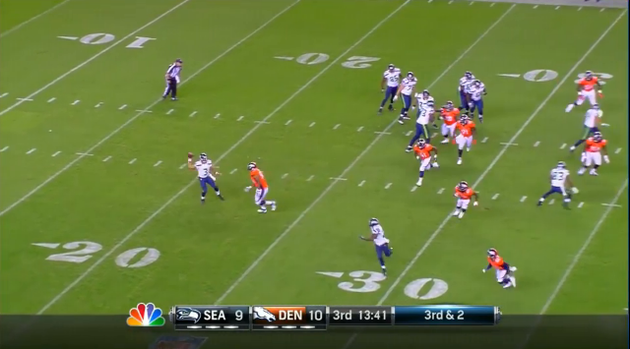 Wilson passes quickly to Turbin who makes a nice catch, plucking the ball out of the air away from his body. This is a routine catch for a receiver, but it's nice to see a running back able to snag this thing. 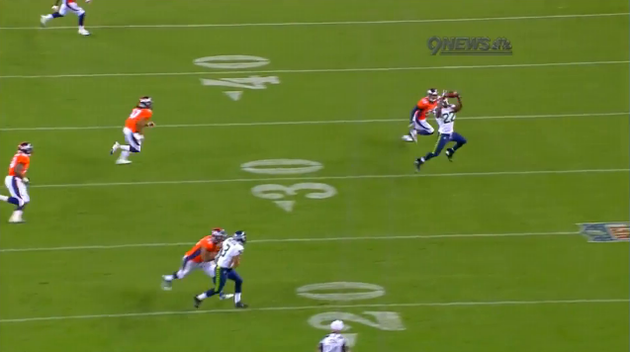 Turbin contorts his body going out of bounds, to extend the football past the first down marker and after review they award the Seahawks a new set of downs. Nice!

Next. Fast forward like, three plays. Third down again.

Seahawks again in their '11' personnel. Robert Turbin the lone back next to Russell Wilson and he motions out to the left slot. 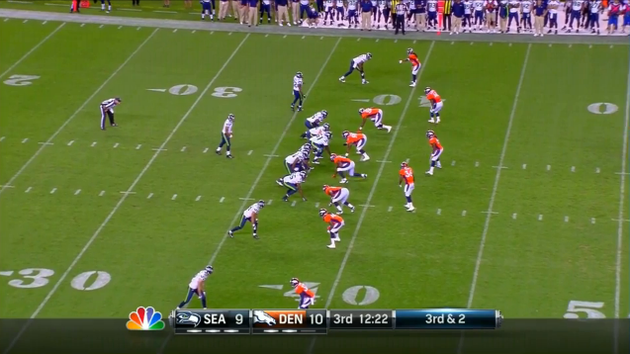 Turbin and Braylon Edwards run a little... well, do we call this a combo route? A screen route? I don't know if those are legal. Either way, Turbin runs a quick little out-route right underneath Edwards. 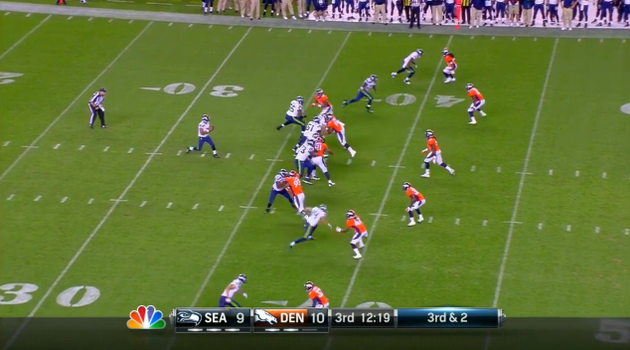 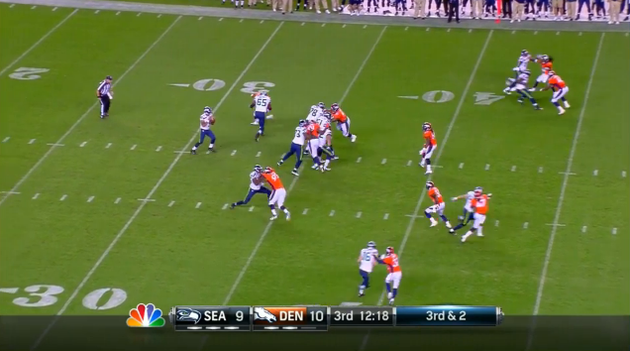 Wilson times the throw well and hits Turbin in the spot where only he can get to it. Again, I say, this is a pretty impressive catch for a running back. And a rookie. Goes for 8 yards and a first down. 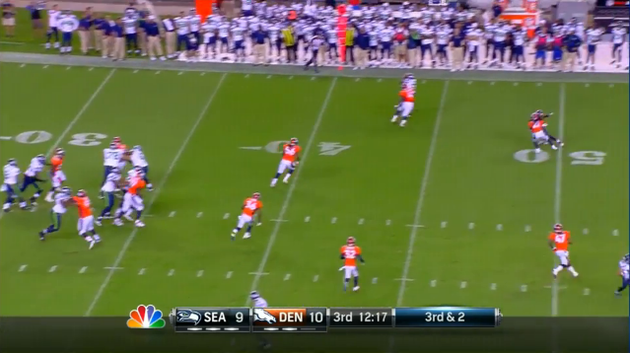 On to the fourth quarter - the next two plays are actually very similar schematically, but run out of different personnel and formations. When this happens, for some reason it's intriguing to me. You know, because running the same thing out of different looks is tricky, or something.

Below, you can see the basic chalkboard scheme. The crux of the play is a fake blitz pickup, in this case, by Vai Taua, who is at fullback. Kregg Lumpkin is behind him in I-formation. This is '21' personnel with two backs and a tight end, in this case, Sean McGrath, set in-line right. 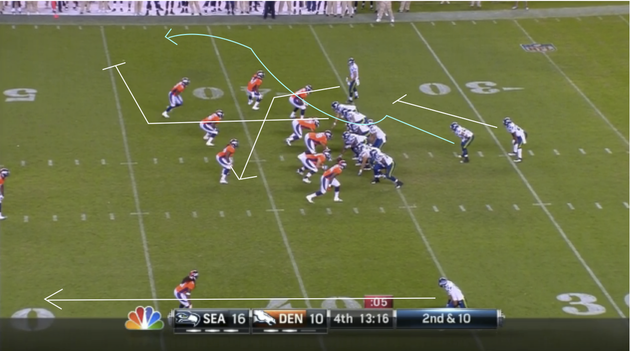 The ball is snapped and Vai Taua fakes the blitz pickup. Generally, when a linebacker sees a running back in blitz pickup or pass protection mode, they'll move their gaze on to what's going on with the play.

As an aside, this is how Pete Carroll explained Matt Flynn's interception against Tennessee last week. Whichever running back was in - I think maybe it was Turbin, was supposed to execute a play-action fake to suck the linebacker in toward the line of scrimmage. The play then called for a 10-or-so yard slant by the receiver, at the second level, behind the linebacker. Well, Turbin instead went to pick up a blitz, which meant that the linebacker, Colin McCarthy, started dropping back into coverage with no play-action. Matt Flynn threw to the spot where no linebacker was supposed to be; interception. Obviously, Flynn needs to read that -- but that's the schematic explanation.

Now, here - the Sam linebacker has been assigned the task of spying Vai Taua in this set (it looks like, anyway) and when he sees Taua fake the blitz pickup, he instead focuses in on disrupting McGrath's release route up the middle. You can see #41 below key in on Wilson and McGrath instead of Taua. This play has very slight elements of a screen in that you really almost want the defense to overpursue here on the pass rush. 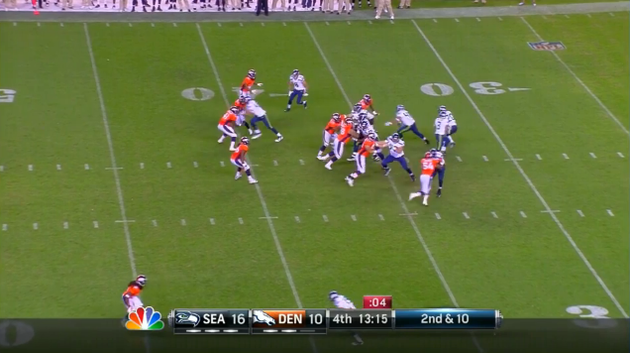 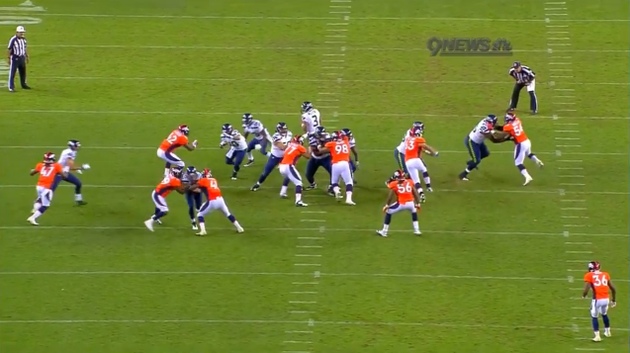 Taua slips past the oncoming defensive end and Lumpkin does a great job cut blocking him right behind Taua. Taua then releases into a shallow out-route and Wilson hits him. Rookie LB #41 Steven Johnson is now several steps out of position and has a lot of room to make up. 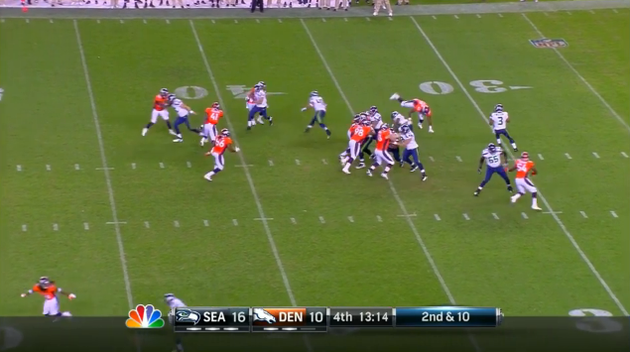 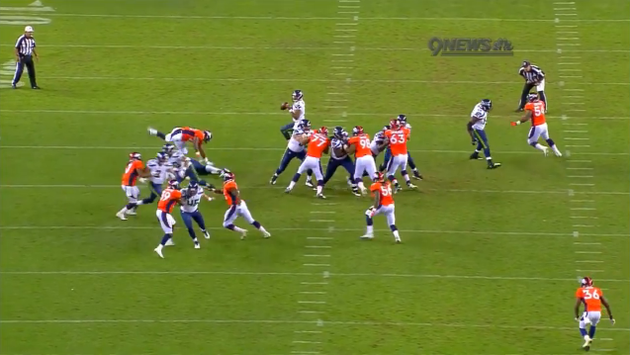 Just look at that beaut of a cut block, both above and below. Anwyay. Taua, who looks very natural catching the football and actually played halfback in college, takes the pass and runs with it, eight yards before slipping just short of a first down. Nice little play. 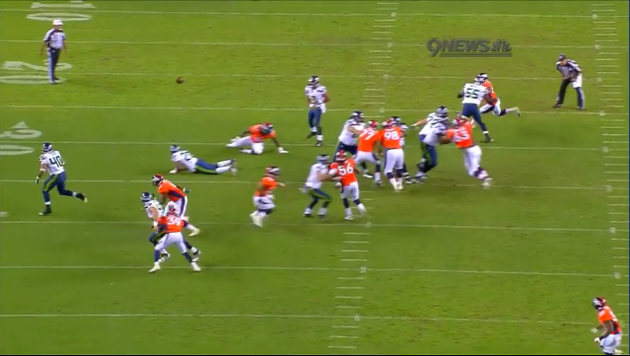 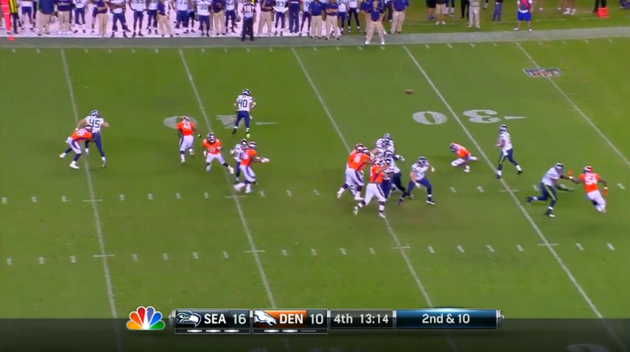 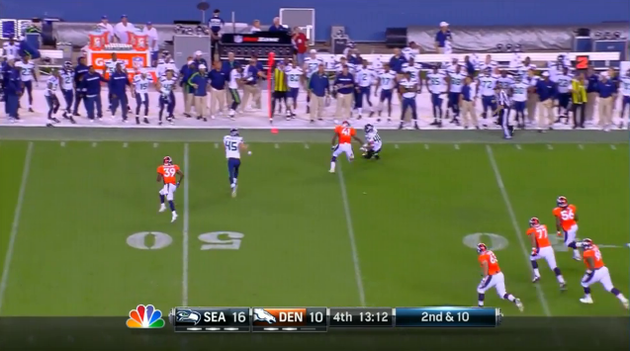 Now, finally, we'll end with Tyrell "I run like MJD" Sutton's touchdown scamper. Again, similar play, with elements of a screen at play. Look at the routes, as they would be drawn up on a chalkboard. Almost identical to the play above except the personnel and formation is different - one back, shotgun. Phil Bates, on the right, will run what Charly Martin ran above, and Sean McGrath will run a deep out once again.

Sutton is going to fake the blitz pickup and instead slip out in a release screen. The Broncos blitz with a strongside defensive back. Perfect! 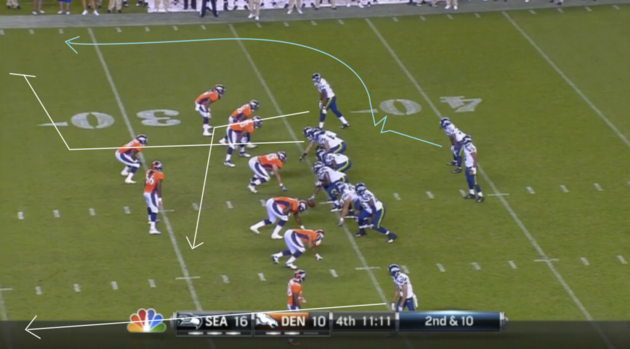 Ball is snapped. Below you see the five that Denver sends. 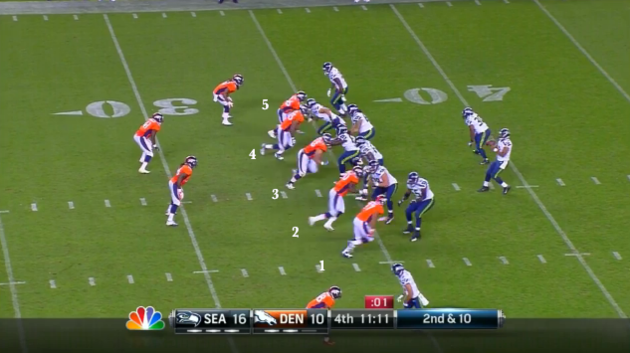 Sutton acts like he's going to lay a block on the fifth defender but instead juke/spinmove/pivots, almost like a basketball post up move, and the drifts outside. Look at where Wilson's eyes are looking - downfield. Integral to avoid tipping your hand to the defense on this screen. 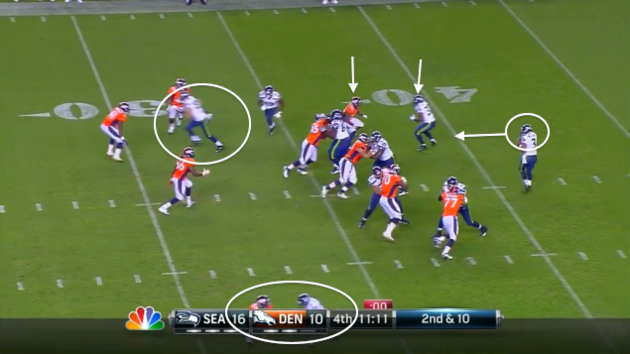 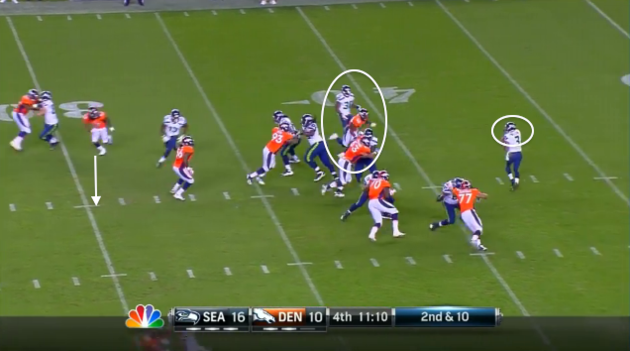 Wilson dumps it off before S Rafael Bush can get to him. 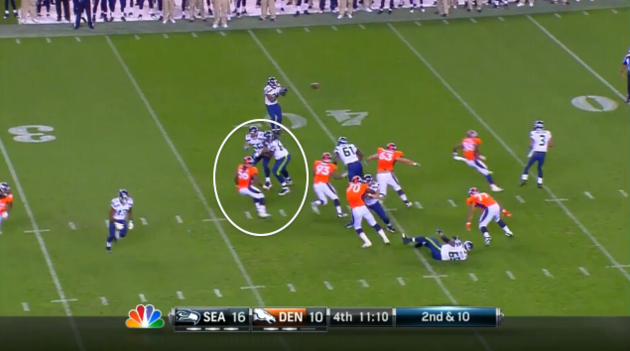 Then, Sutton does his thang. 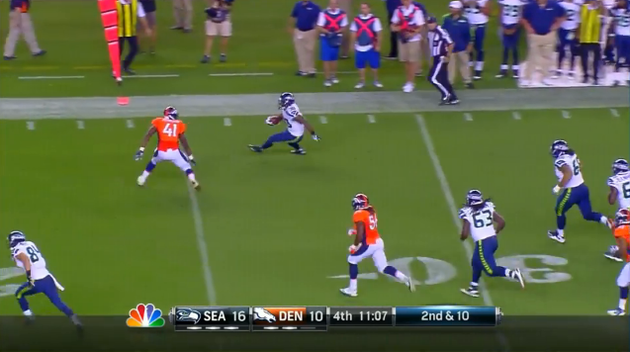 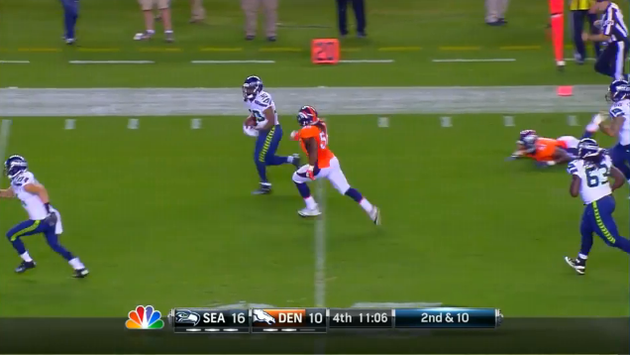 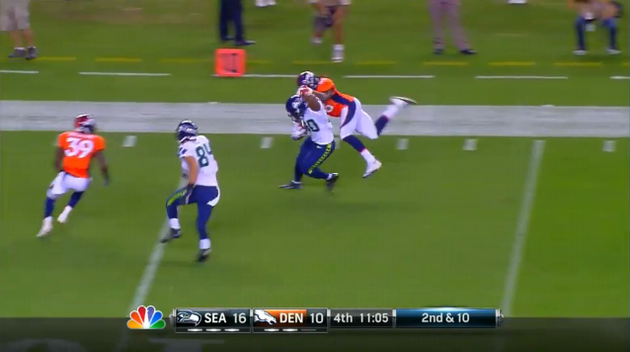 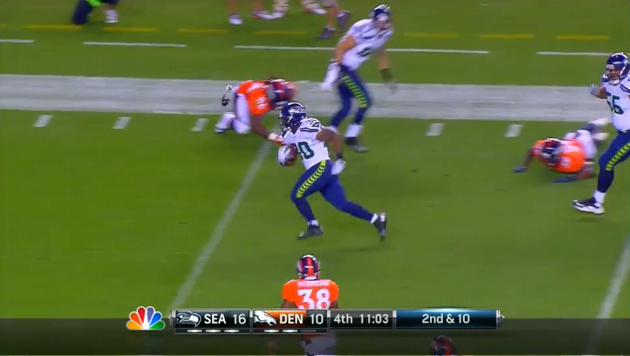