Share All sharing options for: Terrell Owens Catch: Reactions From The Seahawks Sideline

My opinion on Terrell Owens is not a negative one. From a football standpoint, I agree that at times in his career he has come off as a nuisance. Perhaps a distraction that is not worth the talent. I can't deny that there's something to it when several teams don't want you anymore, because NFL teams do not make a habit of getting rid of Hall of Fame players.

However, from a human standpoint I like the guy. I think that T.O. is a sensitive, misunderstood, soft-spoken person that might have some self-esteem issues. I know his history with celebrations, but I think a lot of people have that one place where they don't necessarily have to be themselves anymore. I'm not sure that T.O. feels like "himself" when he's on the football field, and I think that's something he treasures. I think that's why he can't quite leave the NFL. It might be the only place where he feels he has value.

Owens struggled to get in a rhythm in his first Seahawks game and dropped a touchdown pass. You could either feel bad for the guy, feel angry, or just laugh about it. I felt bad for him.

Owens struggled to get in a rhythm in his second Seahawks game and again, had a case of the drops. You could speculate on how his teammates felt about this. Were they mad? Did they just say, "Come on, Pete! Cut this guy already!"? I know that fans did that in the game thread. The fans were over the T.O. thing. But what about the teammates? How did they feel?

When T.O. made his first catch as a Seahawk, an over-the-shoulder falling 40-yard bomb, we had our answer... 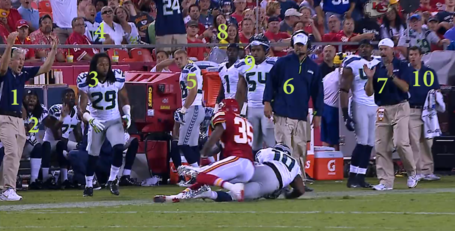 But that is only the beginning...

Pete instinctively starts bringing his hands back to his groin area. Earl Thomas is ready to pounce. Marcus Trufant still doesn't care. Bobby Wagner wants to go play defense, seriously. Donny Lisowski, #38, is wondering how this effects his chances of making the team.

But as the after-the-play develops... something AMAZING happens. 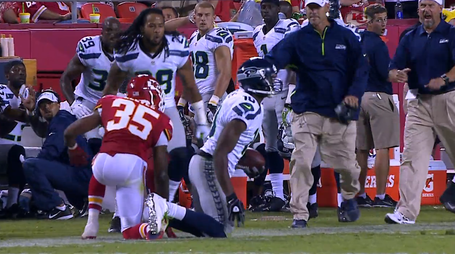 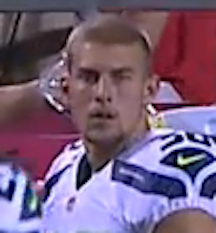 BUT THIS GUY DOES!

I think I have a new favorite Seahawk.