With the way the Seahawks have been investing in the defensive back position these past two seasons, we writers around here have speculated that you could see a return to Seattle's more heavy use of dime looks and the seven-DB "bandit" package in 2012. For a quick refresher on these DB-heavy packages - something the Seahawks utilized a good deal in 2010 in Pete Carroll's first year, because of their glut of versatile athletes at the time - I reference an article I wrote back in May that talked about some of the reasons these looks are effective.

"If you feel okay about your guys rushing, which some teams don't, then they can rush, they can drop, they can cover 'backs," said Carroll, back in 2010, talking about the 'bandit' package that featured seven defensive backs. "A guy who's on the line of scrimmage can end up being a deep defender and so you just give yourself a variety of things that you can do and interchange some parts and stuff and try to make it difficult."

"It's a fun package for the guys to play, because a lot of guys get to do things," Carroll said. "We're utilizing Lawyer in ways and Babineaux in ways that they give us unique stuff. It's nice also to get Kam Chancellor on the field in the package so that he can play some, there are just some things that he does well. Earl has some stuff that he does that's kind of unique, so that's all part of it. We're just trying to be very multiple in that because of the availability of the movement."

Lawyer Milloy explained it back then, noting: "When you have six, seven guys out there as (defensive backs) that are pretty interchangeable, it makes it really tough for a team to know where you're coming from." He elaborated - "[The offensive linemen] don't know where to go. They point out the protection and once you get that little small mix-up, then someone is coming scott free. It's giving the offense a lot of problems and we look forward to having those packages on the field because we've got guys that can cover, pass rush and make tackles."

Milloy, Big Play Babs and Roy Lewis are all now gone (Lewis for now, anyway), and have been replaced by guys like Winston Guy, Marcus Trufant, Phillip Adams, Jeremy Lane, and Walter Thurmond, once he gets healthy. These guys all bring different skillsets to the table. Making things a little more multiple and versatile against both the pass and the run are speedy linebackers being added into the mix the last two seasons, like Bobby Wagner, Korey Toomer, Mike Morgan, and Malcolm Smith. All four of those LBs were clocked in the 4.4s coming out of college so each guy can certainly cover some ground while still offering a little more dependability against the run than a normal DB.

Now, I think we'll see some limited use of the seven-DB 'bandit' package in 2012 in very obvious passing situations, but for anything 3rd down and less than maybe eight or so, I think the dime packages (6 DB) might be a little more common, simply because of the speed at the linebacker position now.

This personnel grouping was used on at least one play on Friday and it resulted in a pick-six for Earl Thomas after a 75-yard return. Let's break it down.

Below, you'll see that the Chiefs are driving here, nearly into the red-zone, and now face a 3rd down and 7. Seahawks break out their dime look with three down linemen (Pierre Allen LDE, JayeHoward DT, Cordarro Law RDE), two linebackers (Toomer and Wagner), and six defensive backs (Phillip Adams, Marcus Trufant, Winston Guy, Richard Sherman, Jeron Johnson, and Earl Thomas), visible below. This is in response to the third down/distance and a three-wide set by KC. 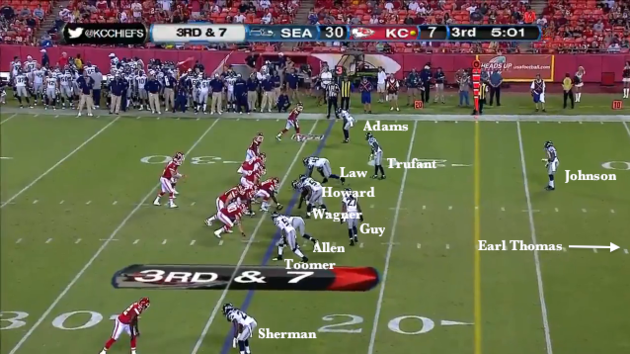 I've laid out the scheme below. Essentially, both Wagner and Allen will rush left, with Toomer stunting over both of them through the open gap. The Seahawks have the numbers advantage on the left because Wagner comes in pass rush and Chiefs running back Shaun Draughn badly misses on his blitz pickup.

Kevin Boss runs a hitch route to the flats and Earl Thomas anticipates and jumps this route. 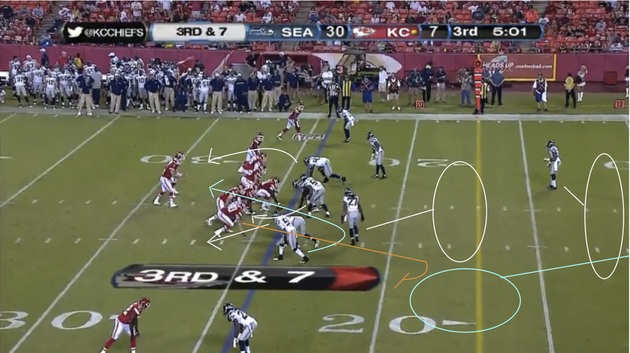 Ball is snapped. You can see Wagner and Allen strafe left and forward on the rush, and Toomer stunts over. Toomer, for what it's worth, has shown very nice closing speed on several blitzes this preseason so I have no doubt this is a role they see him being utilized in. 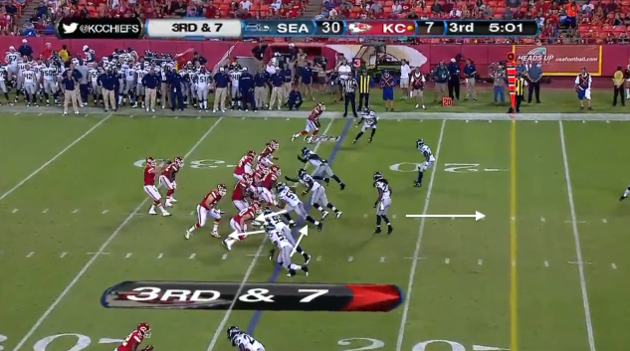 Winston Guy drifts back into zone coverage. Johnson drifts to the middle and you can see Earl Thomas below already breaking to intercept Boss. Cassell isn't even looking there yet. 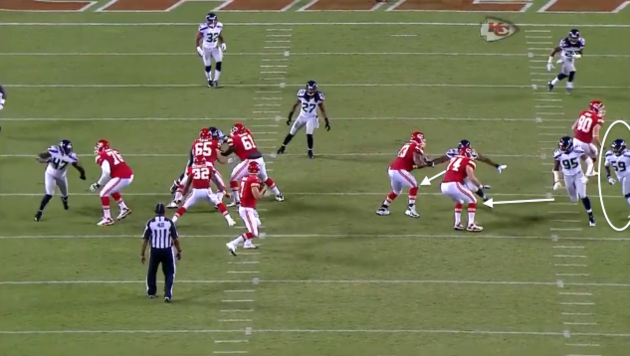 He is now, but underestimates Earl's speed. He also fails to step into the throw, recoiling a bit before following through fully as Toomer closes in. 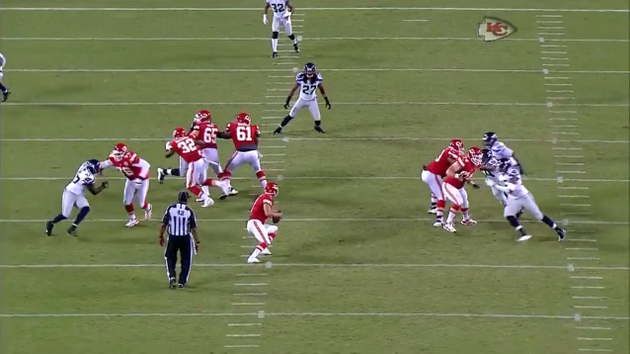 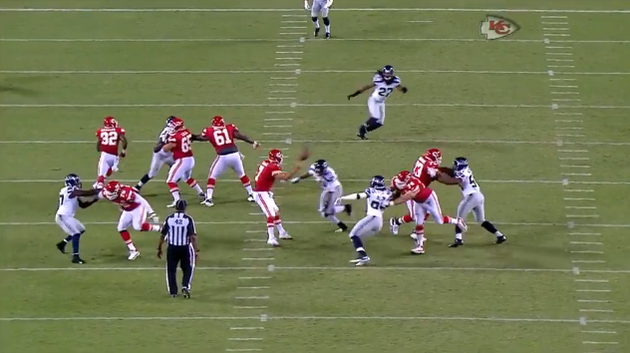 As you can see below, Toomer hits Cassell hard as the ball comes out. Boss looks open, but, folks, he ain't. 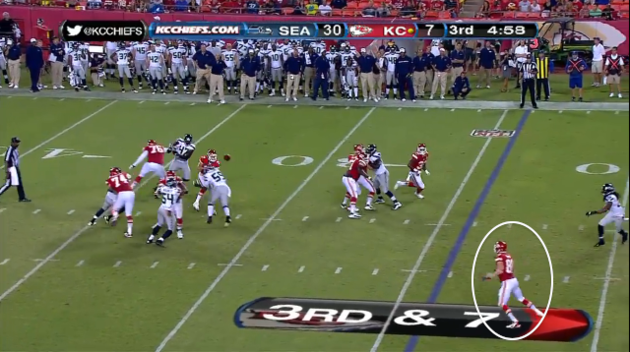 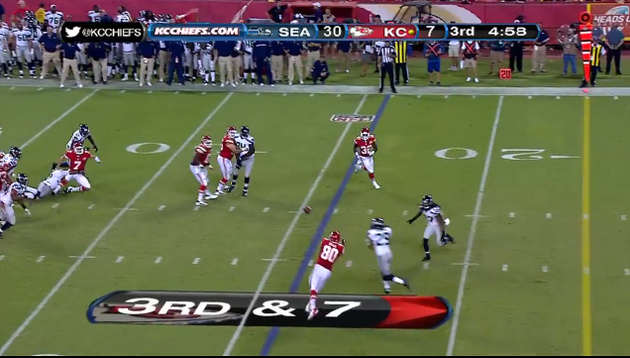 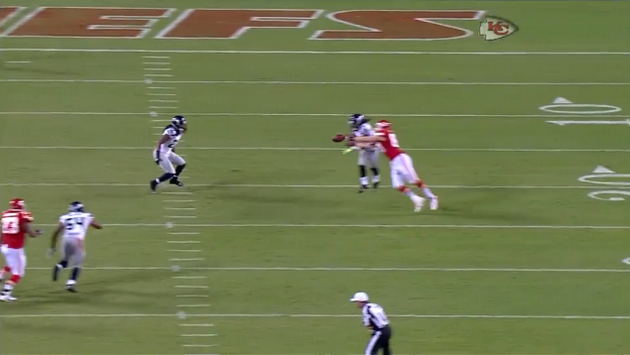