Luke Werheim of Seahawks' blog My Hawk So Fly volunteered to sub-in for Davis this week in charting all of Russell Wilson's passing snaps (Davis is in Didneylaaand), so I wanted to share them here, along with a few noteworthy tidbits. First and foremost, as you know, Wilson led the Seahawks to a score on his first six series and his seventh and final series ended with a missed Steven Hauschka field goal from 51 yards. So, Wilson got the offense to an acceptable range. (Or, as Maximus would say, "Range is good.")

Wilson has thus far gone 35 of 52 (67.3%) for 464 yards passing, five touchdowns and, if you care, a 119.4 QB rating in three games. His only glaring mistake was short-arming a pass up the seam to Sean McGrath in the end zone in week one vs. Tennessee that got incercepted. On Friday, against the Chiefs, he went 13-of-19 for 185 yards, two touchdowns and no interceptions in two and a half quarters. He went to the bench in the third quarter after guiding the Seahawks to a 30-7 lead, and in those two and a half quarters, Luke charted 27 passing snaps (19 attempts, plus two sacks, two runs, two roughing the passer calls and two defensive pass interference calls) and found the following:

14 of 27 of Russell's passing snaps came out of the shotgun; so in other words, he was in shotgun just over half the time the Seahawks had a designed pass. The personnel groupings for those passes broke down like this:

The Seahawks seem to really like '11' and '12' and I imagine those will be their go-to groupings for the most part. Two tight end, two running back sets ('22') will be a factor, likely, as will '21'. It will be interesting to see if the Seahawks spread things out a little more with Wilson leading the offense, and keep in mind with Kellen Winslow in the picture, 'two tight end sets' aren't exactly 'heavy formations' all the time - Winslow is often in the slot but can even be flexed out all the way to the wing, so he gives the Seahawks the ability to show some multiplicity on offense without changing personnel.

Similar to last week against Denver, the Seahawks kept Wilson in the pocket -- there was only one designed rollout, and this strongly implies coaches wanted to see him operate from pocket again. Interestingly, play-action was only used on six snaps, and again, this may have been in an attempt to just see how well Wilson can operate in a base offense. The offensive line kept Wilson pretty clean overall though, providing nice pockets and enough time to get throws off, and the two sacks Wilson took were both off of Kansas City blitzes (that sounds like a drink). However, during the season, I expect that the Seahawks will utilize half rollouts, waggles, play-action and misdirection more heavily to keep backside defensive ends and linebackers honest and to hopefully make opposing coordinators account for those types of things in their game-planning.

And, without further ado, here is a chart detailing each of Russell Wilson's passing snaps, with big ups to Luke for all the hard work it took to put this together! HERE IS THE DOWNLOADABLE PDF. That PDF might be easier to read. 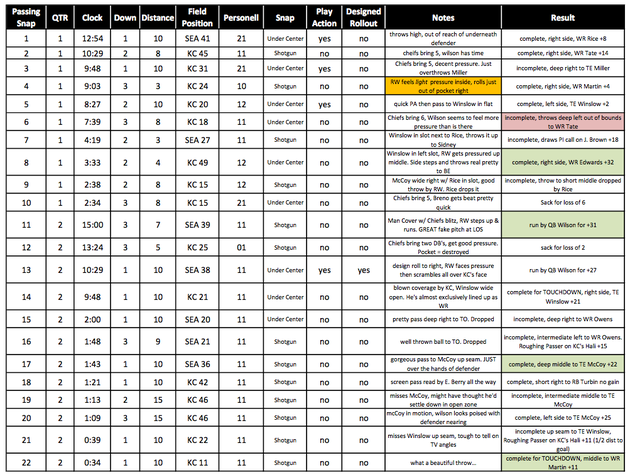