Somewhat glossed over in all the Russellmania these past few days has been the solid improving play from Robert Turbin thus far this preseason. Turbin started fairly slow in weeks one and two - rushing for 24 yards on 10 carries versus Tennessee and then 34 yards on 10 carries at Denver, ceding snaps to Leon Washington, Kregg Lumpkin, Tyrell Sutton and a few to Marshawn Lynch. On Friday, he carried the ball 14 times for 93 yards with a touchdown, and looked a whole lot better doing so. There is a learning curve for a rookie running back that can be expected, and though Turbin did flash a few nice runs in his first two outings amidst the one- and two-yard carries, he seemed to put things together a little better in his third game.

"Running backs have to get game tested. You can't tell until they're faced with the speed of the game and tackles they have to break and all of that stuff," coach Pete Carroll said of Turbin, via Clare Farnsworth. "Robert has done a fantastic job. We have no hesitation playing Robert. He played great last week. It was his best game, clearly. In terms of his pass protection, I think he was 100 percent and there were some difficult things he had to deal with. That's a remarkable plus for a first-year guy. He's really studied hard. There's nothing he can't do."

The Seahawks' didn't lose yardage on any carry on Friday while rushing for 189 yards on 28 attempts. Turbin averaged 6.6 yards per carry on his 14 totes, and thus far during this preseason, the Seahawks, as a team, are averaging 184 yards per game and 5.6 yards per carry. That's certainly not something to expect going into the regular season, but it's encouraging, no doubt. Most encouraging to me though is the way that Turbin played on Friday and the benefits of his skillset became apparent. Now, I've already talked about his nice ability to catch passes out of the backfield and Carroll notes above that his pass protection was very good as well, but the thing that I noticed the most was his deceptive speed.

There was one play in particular early in the 2nd half, with the Chiefs still playing their first unit, where Turbin bounced a run that was meant for the middle, to the outside, and got to the sideline quickly enough to get downfield 5 or 6 yards. Most 'big backs' in the NFL won't be able to get to the sideline quickly enough to 'turn the corner', and Turbin may not be able to consistently either, but on that play, he surprised me, and I went from a wince on his initial decision to an eyebrow raise on the execution.

Now, the Seahawks' bread and butter plays in the run game are the inside zone and the outside zone (stretch zone). Turbin had a few very nice runs in these looks on Friday and I wanted to break down a few of them.

First up, early in the game, the Seahawks run a simple inside zone run meant to work through the B-gap to the right of G J.R. Sweezy. As you'll see below, that idea is thwarted when KC LB Jovan Belcher sniffs it out and quickly steps through the gap.

Turbin does what Marshawn Lynch does so well for this offense - makes something out of nothing. Twice.

Below, you'll see that the Seahawks are in '12' personnel with Anthony McCoy and Zach Miller set right and WR Sidney Rice in tight on the formation. This screencap is right after the ball has been snapped. I've circled Belcher, and pointed out where he'll move to in response. 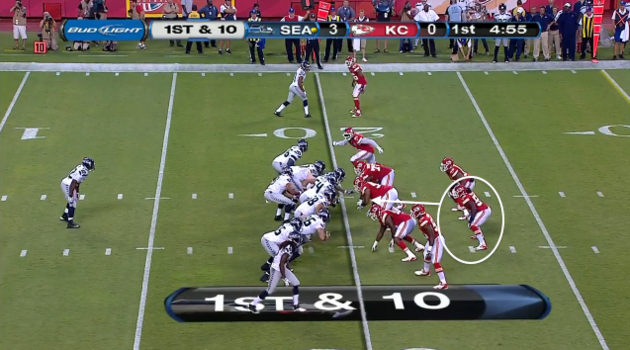 Below, you'll see the ball handed off to Turbin and the line actually does a nice job opening up a hole through the Chiefs defensive line. Belcher just does a nice job of filling it, even getting into the Seahawks' backfield to potentially stop the play for a loss. 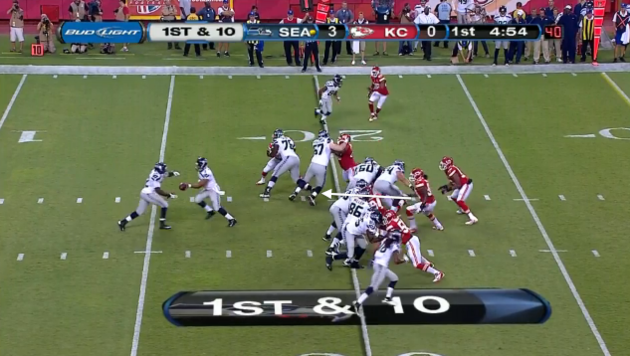 You can see below that Turbin changes direction quickly to avoid Belcher and looks to get outside. Turbin breaks one tackle. 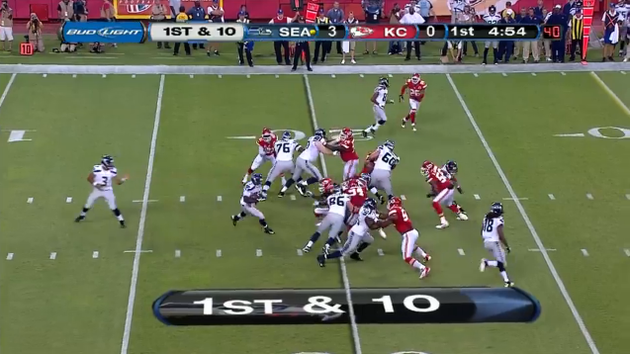 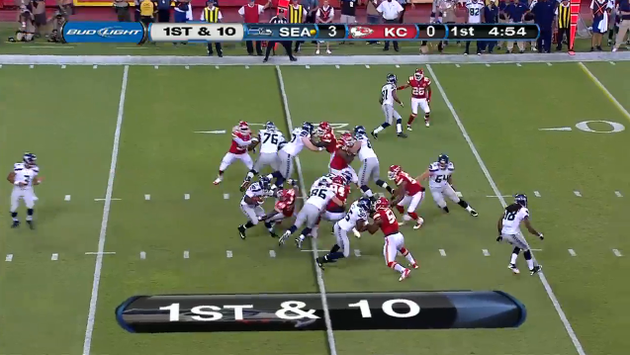 Turbin gets past Belcher but things close up a bit to the outside. He looks to turn it up inside again but it met head on. Somehow he breaks that tackle too and scoots forward for 7 yards. This play is reminiscent of Lynch in that once you think the play is dead and the pile is stopped, out comes Beastmode for another 5 or 10. 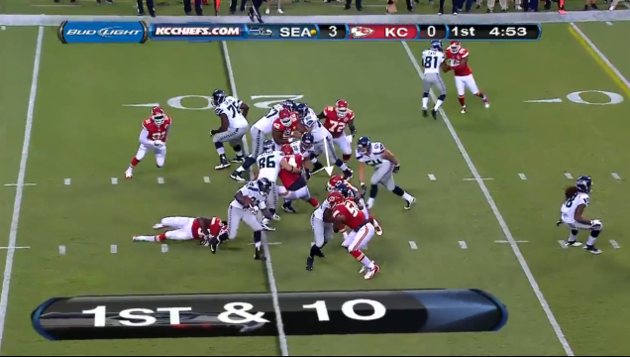 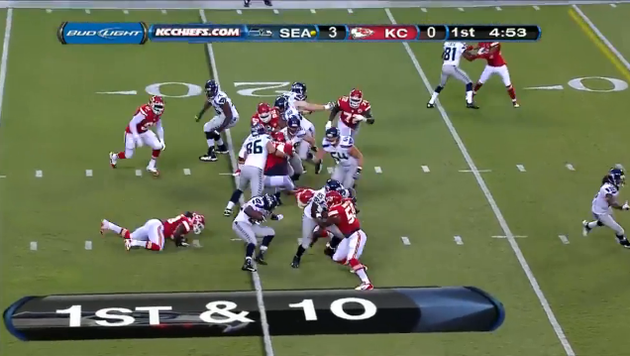 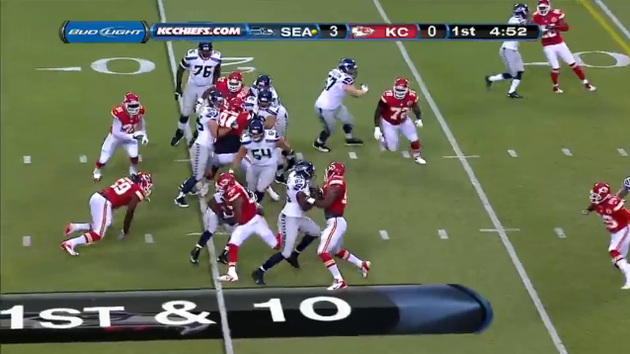 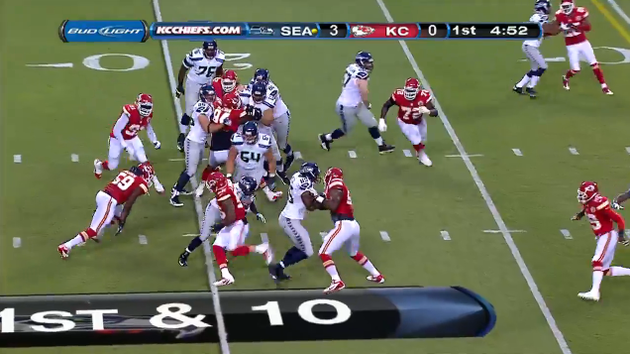 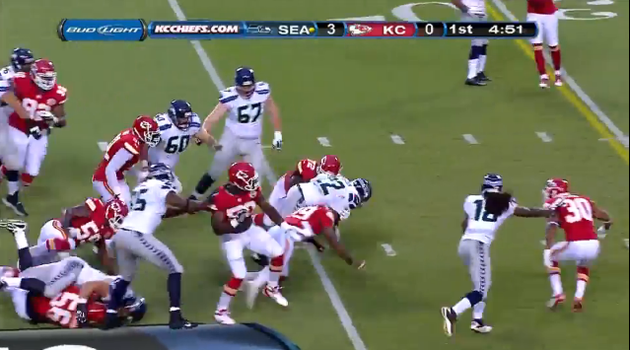 Moving on to the third quarter...

On this play, Turbin's vision and decisiveness were most impressive to me. In a zone scheme, a runner needs to work in tight coordination with his blockers - improvisation early is a no-no unless everything just goes to shit - and in this system, you must get from Point A to Point B according to the plan, as Tom Cable has described it. Then, what you does from Point B to Point C your job as the running back - make players miss, make a cut back, or put your facemast into someone's chest and bowl them over.

In this play below, Turbin shows some great vision once he's past Point B. Let's break it down. Seahawks in '12' personnel with Anthony McCoy and Sean McGrath aligned right. McGrath, in what is becoming a Seahawks' staple, is going to cross-block the defensive end across the formation as Turbin runs up the weakside B-gap (to the left of G Paul McQuistan). The first-team offensive line unit is still in here. 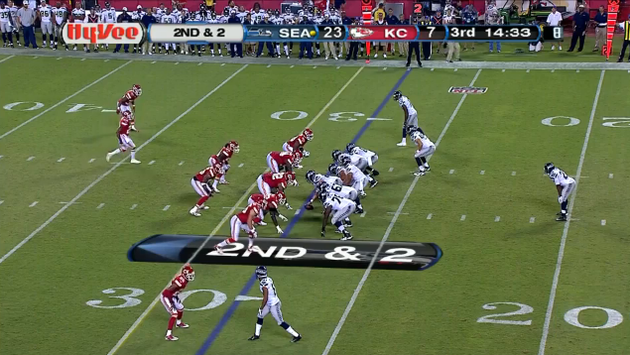 Ball is snapped; you can see McGrath cutting across the formation. 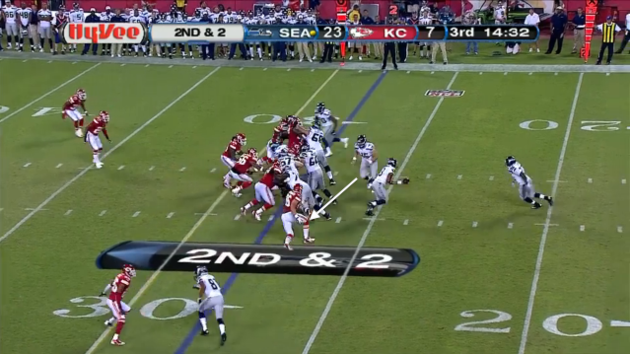 Below, you can see Russell Okung get nice leverage on his man - and his effort creates a nice little seam for Turbin to slip through. Point A to Point B. 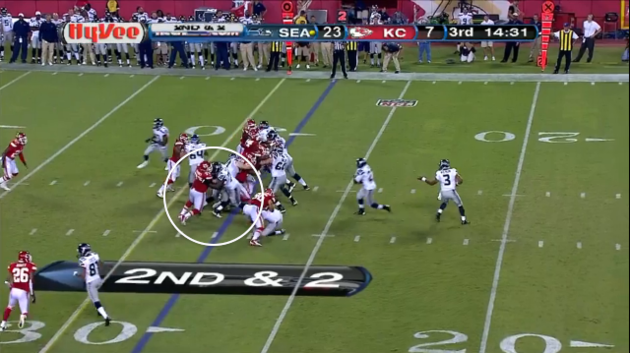 Turbin sort of hops through the hole just off of Okung's back but then will immediately be met by KC's middle linebacker here, below being blocked by Zach Miller. 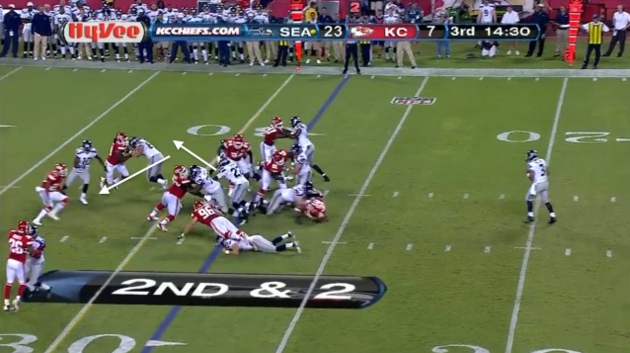 KC LB Belcher, I believe, slips Miller's block and goes to make the tackle on Turbin as he hits the second level, but Turbin deftly strafes left and into daylight. Hell of a move. 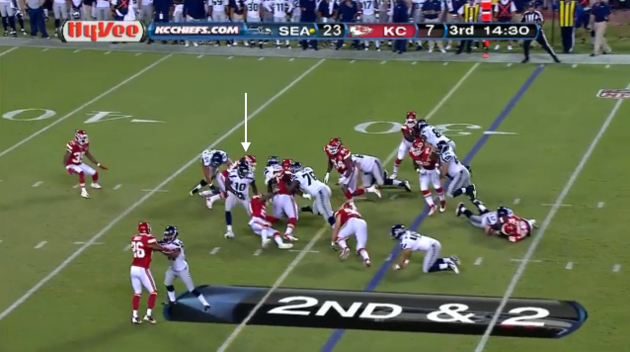 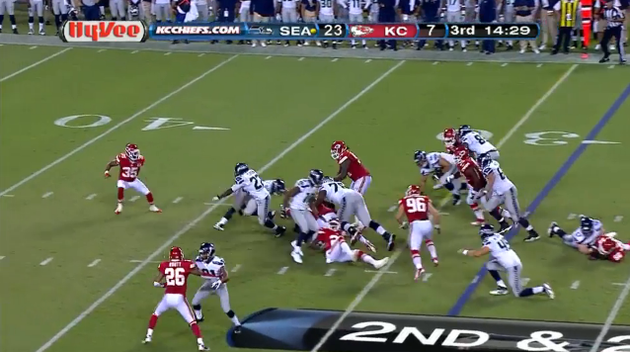 Turbin high-steps his way to a 17-yard pickup. 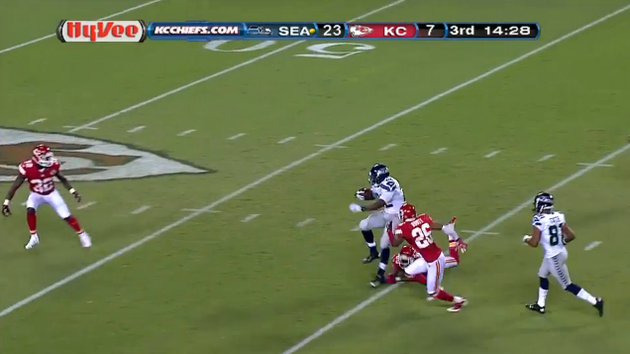 Ok, so we've broken down Turbin's ability to make something out of nothing - also known as balance, strength, determination, motor - whatever you want to call it. He hasn't yet proven he can consistently break tackles, but I did feel like he improved on this ability significantly over the last two games. It's something the Seahawks have been working on with him very closely.

We've also talked about his vision and decisiveness. Right now, I just want to talk about his speed. Because, frankly, this play had me intrigued. Seahawks run out of '21' personnel here with Vai Taua lead blocking and Terrell Owens running a fake end around. Taua will meet the oncoming defensive end, which allows Russell Okung to move into the second level. 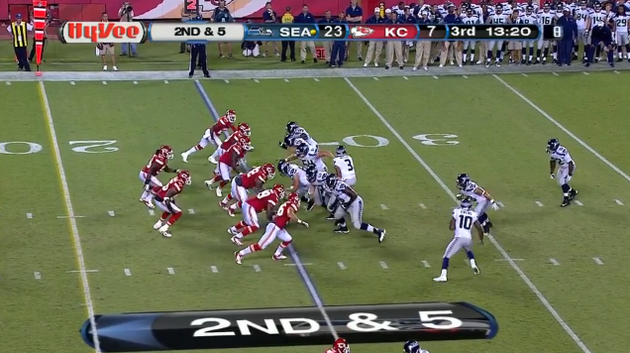 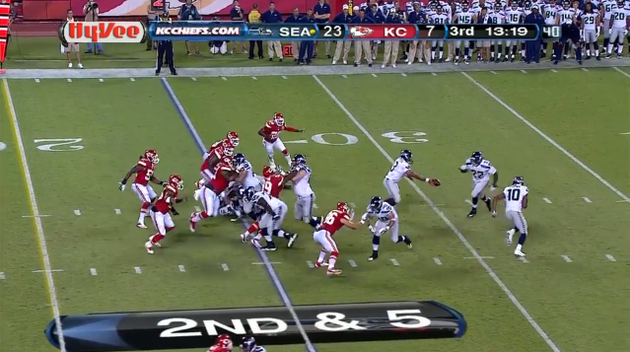 Ball is handed off to Turbin. A decent looking lane develops off the left C-gap, below. Note the cut blocks on the backside, another hallmark of the Seahawks' run game, and you can barely see Braylon Edwards blocking on the edge downfield. 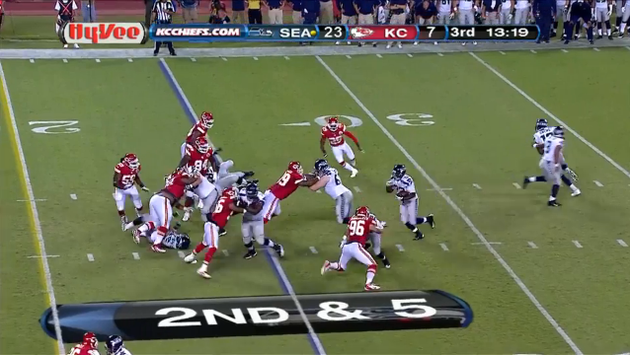 Now, this is where the speed thing comes in. Ever hear people talk about hitting the hole quickly? Or explosiveness into a seam? North-South runner or one-cut-and go? Well, Turbin does these things. I've affixed an arrow to Turbin's head in the picture below- and it's the only thing you can see as he's hidden among the mess of bodies.

When you look at the picture below, it doesn't really look like this play is going to amount to much. There are seven Kansas City defenders in the vicinity - some blocked, some in decent position - and this looks like a pile-driving type of situation where you maybe pick up five or six yards. 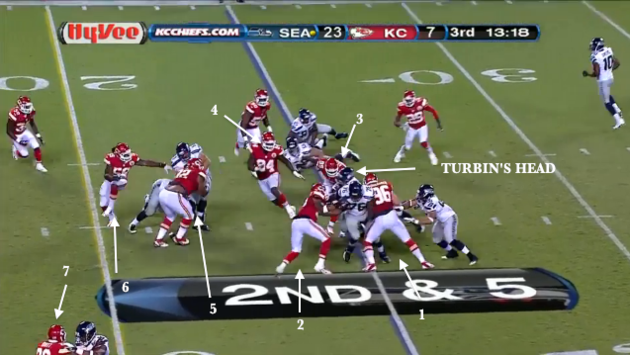 I blinked. What happened? Now Turbin is through? 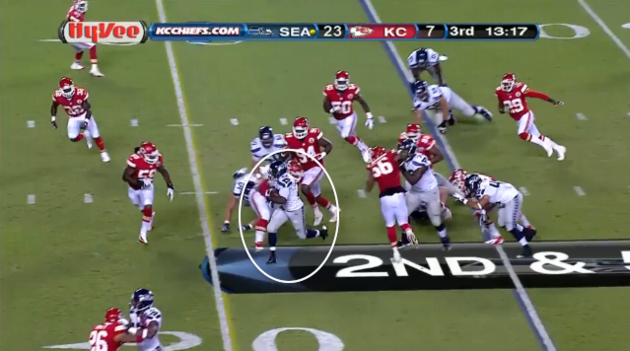 It looks like KC LB Belcher, #59, has a step on him to at least force him outside, but nope. Turbin's just going to beat both Belcher and cornerback Stanford Routt to daylight. 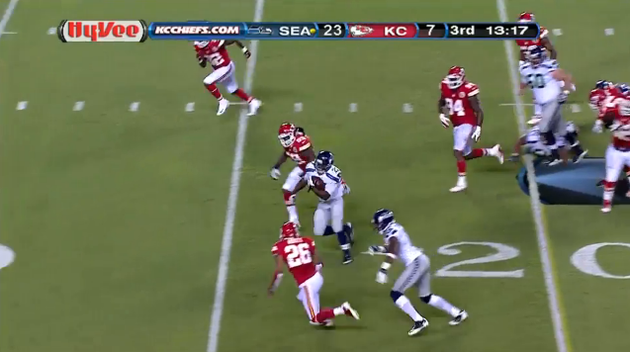 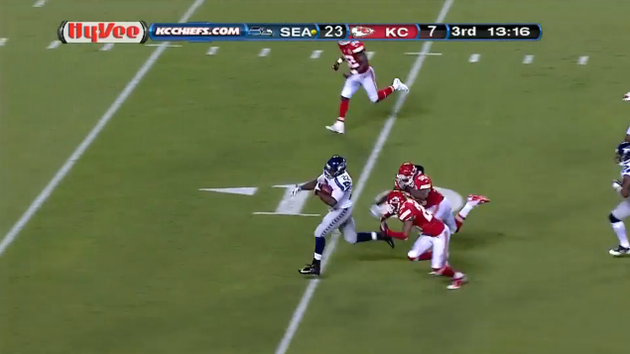 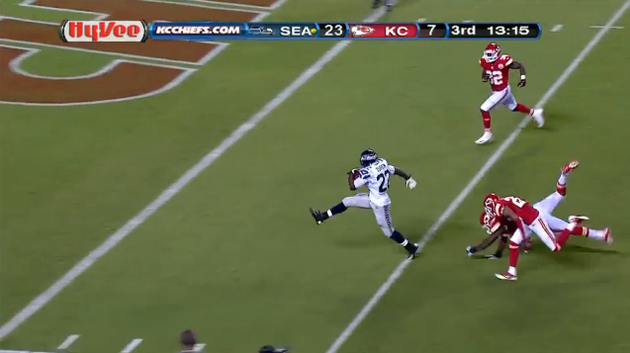 Ok, I admit I'm overhyping this run a bit - just to have a little fun with it. It's preseason, yadda yadda yadda, and all that, but damn if I didn't come away impressed with the N.O.S. he was able to turn on there to get through the hole and beat a confluence of defenders (Belcher and Routt) to get to paydirt. His burst is the thing to note on this particular play, and it's what we've heard about in respect to Turbin all along. It's an extremely beneficial talent in this zone blocking scheme, and he showed it on that play.

The idea of developing Robert Turbin as a backup to Marshawn Lynch is exciting to me, because he's beginning to show you those tools that could possibly make him very effective in that role. He didn't look great in his first two outings, apart from his apparent receiving abilities, but this game was encouraging.