Seahawks To Sign Terrell Owens: If He's As Good As He Was in 2010, He's Pretty Good

Share All sharing options for: Seahawks To Sign Terrell Owens: If He's As Good As He Was in 2010, He's Pretty Good

The big news coming out of Seattle Seahawks training camp over the last 24 hours is that Terrell Owens was coming in for a tryout. Then he had that tryout and it supposedly went really well, with Owens running a 40 under 4.50 seconds. Those are the kind of numbers, along with his size, athleticism, and hands that would make Owens a top prospect at the combine if he were 21 and not if he had last played in college during the second World War.

Edit: The news just after I posted this is that they thought that Owens fit well and would like to know the return policy, but sign him to a 1-year deal.

Of course, Owens isn't that old, but he is that old. He'll be turning 39 in December, and that's not an age that you'll see most non-kickers still play in the NFL, let alone start and produce. However, some do.

The G.O.A.T Jerry Rice played in the NFL until he was 42, not-so-famously (except around here) finishing his career with Seattle. But when he was 39, he caught 83 passes for 1,139 yards. When he was 40, he caught 92 for 1,211. Rice was able to play into his forties not only because he was a special talent, but because he was in a good situation and worked his ass off to stay in better shape than the rookies. Owens is hardly any different in that respect.

He still has been reported to work his ass off in the gym and stay in as good of shape now as he was when he was in his 20s, if not better. His 40 time seems to back that up. He also wouldn't be the first receiver to seem to decline in production and then come back and produce when it was unexpected.

Rice was more productive at 39 and 40 than he was at 37 and 38. Randy Moss was written off in Oakland and then had a career-year with the Patriots. In the right system, with the right work ethic, a player like Terrell Owens could potentially still be highly productive.

In fact, Owens was not unproductive in his last NFL season when he was with the Bengals in 2010. He finished the year with 72 catches for 983 yards in only 13 games. But numbers don't necessarily always reflect talent. What did Owens really have left in the tank.

When the Seahawks signed Antonio Bryant, I wrote a detailed piece about his career that probably took you longer to read than his career in Seattle actually lasted. I wrote another piece about Braylon Edwards, and for all we know, he might not last until the time you're done reading this. (If you do decide to continue.)

T.O. hasn't even signed yet and still here I am. Writing about the dude. WHY?! Because I was interested to see just how productive he was in 2010. I decided to only look at one game and only one game and it took plenty of time for me to do that as it is. Here's a look at his best game (by numbers) of 2010. I was surprisingly impressed.

Owens was moderately productive during the first three weeks, about as productive as you'd expect a wide receiver that's almost 37, but then he had one of his best career games ever against the Browns in week four. T.O. caught 10 passes for 222 yards and the Browns actually weren't especially bad against the pass in 2010. In fact, it was the most passing yards they ended up giving all year long.

With just under seven minutes left in the first quarter, T.O. runs a nice route up the middle and is wide open for a gain of 17. 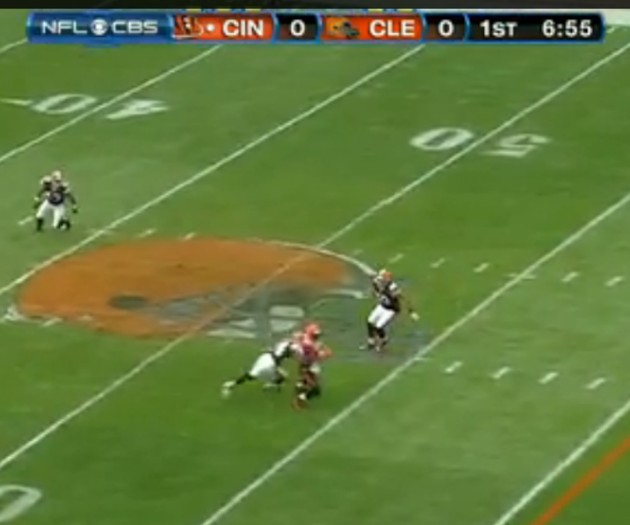 Sorry, that quality looks like I'm taking screenshots of a season one episode of Salute Your Shorts off of YouTube. Let's try and get that quality higher from here on out.

Not another look to Owens until 3:41 left in the first half and then it's a big one.

On their own 22, Owens gets a great first step on Sheldon Brown and just separates himself enough plenty to get what would normally be a nice 20-30 yard gain. 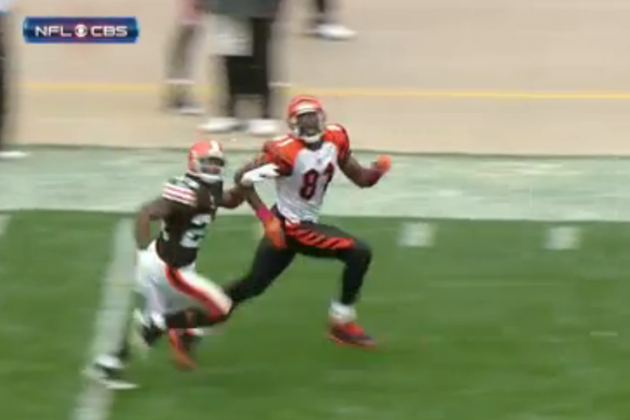 Except that this happens and it's a 78-yard gain instead. 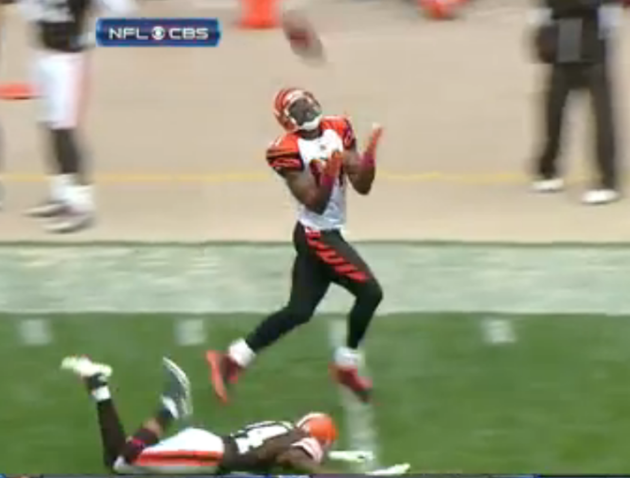 On the first day of football camp, they teach that you absolutely can't stop a player on defense if you are on the ground. But Sheldon Brown missed the first day because he had a dentist appointment. There's no over-the-top help because Terrell Owens was 36, and so he walks right in. Well, calmly jogs the last 40 yards and not a Brown in sight. Especially not Sheldon Brown.

Owens got a great first step, ran a good route and got a step on Brown, but the rest was just "running 101."

All of a sudden the Browns start to think that maybe Terrell Owens does have something left in him and put super-rookie Joe Haden on him on the next series. Carson Palmer goes back to T.O. and he runs a quick out, getting just enough separation from Haden who Supermans back to the ball but doesn't quite get there. That's Owens versus Haden at the bottom of the screen: 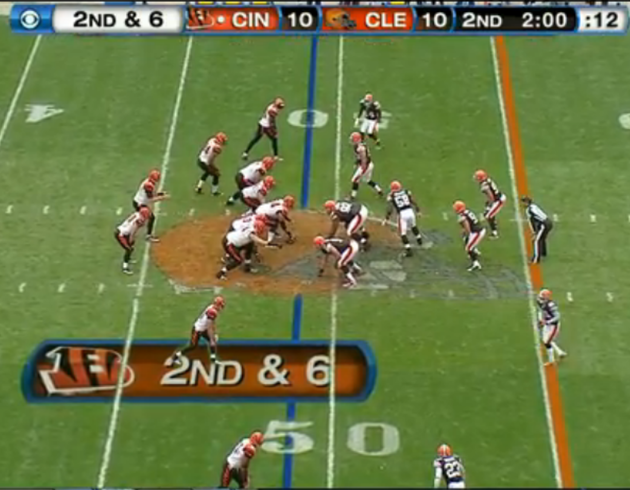 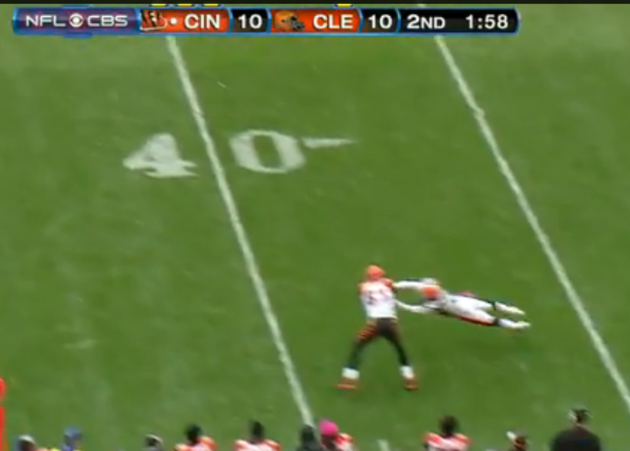 TO gains about another 13 yards on the run before getting tackled by Haden and some other non-descript Browns for another 25 yard gain. Before the end of the first half, Owens has 120 receiving yards.

In the third quarter, Owens actually runs across the middle for a pass, catching it about 8 yards past the line of scrimmage but then actually showing some nice open-field moves to turn the pass into an 18-yard gain. 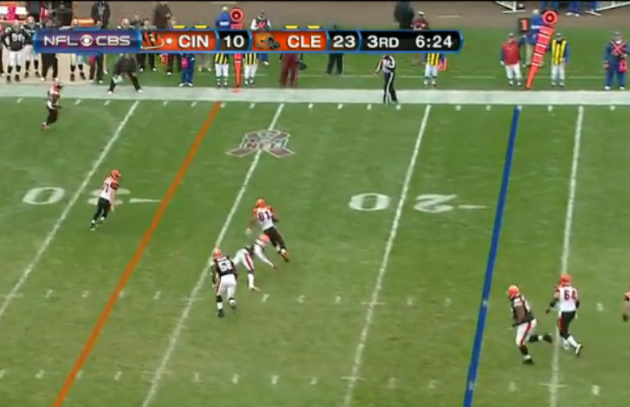 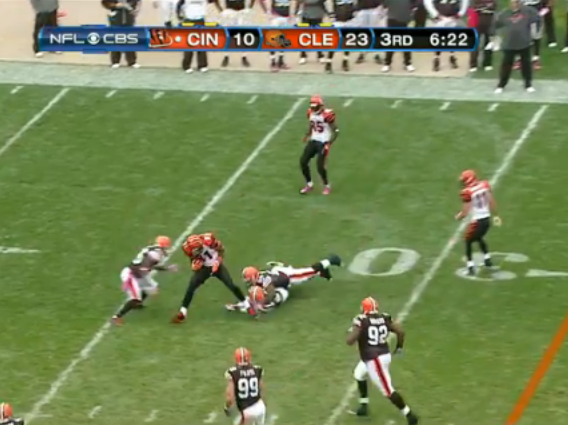 A few minutes later and Brown is covering TO again and again, he's doing a bad job of it. Owens gets a good 2-3 yards of separation and by the time the ball gets to him, there isn't a Brown in his vicinity. 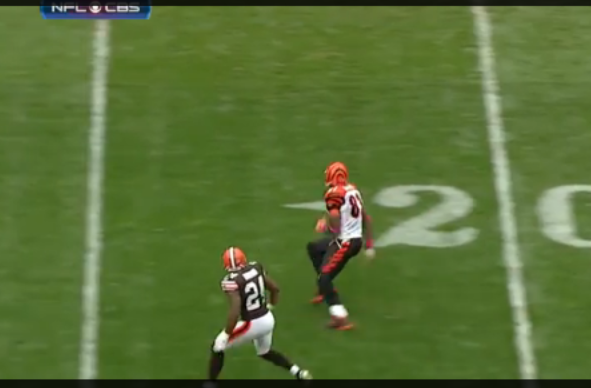 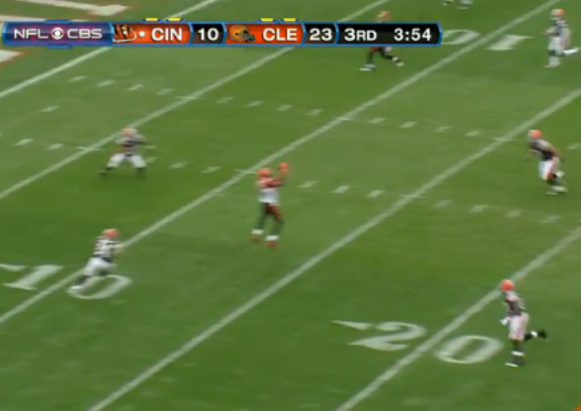 It's another 19 yards for Owens.

Fourth quarter and the Bengals down by 10 points and now it's Eric Wright that can't keep up with Owens that runs up the middle now and makes an easy catch and run for 27 more yards. 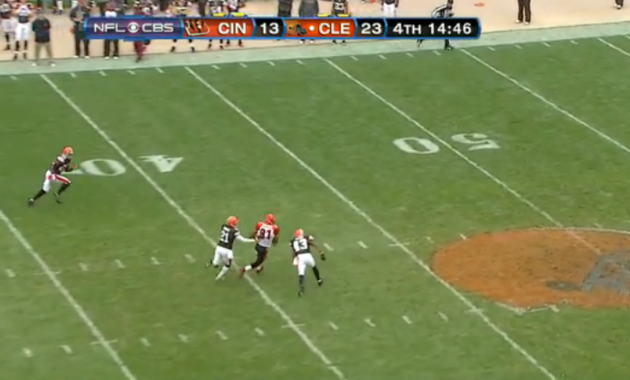 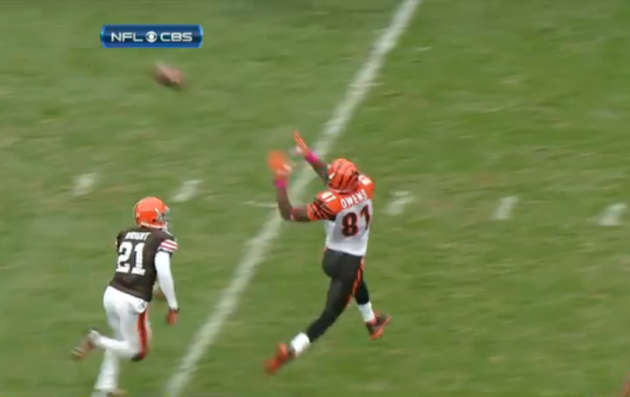 Do I have to remind everyone that Owens is 36, almost 37, at the time of this game? Now, the cornerbacks he's faced with the exception of Haden, are not great. Good, but not great. The one time that I saw Haden matched up with Owens when Owens was targeted, was the best play on Owens all game long and just came within inches of batting it down but Haden seems to be the only corner that can play soft on Owens and still play good defense. Brown and Wright are absolutely embarrassed by him and it's worth noting that most cornerbacks in the NFL are not at the level of Haden, even as a rookie.

This version of Owens is fast, has great hands, plays well in the open field, is big, strong, and has run a number of different routes and caught the ball all over the field. This is part of what made Owens an All-Pro wide receiver, one of the best to ever play the game, and he was productive at 36, almost 37.

He wasn't perfect the whole game, though. On the next play after the 27 yard gain, Owens runs across the middle on an easy catch. Maybe too easy and he drops it. 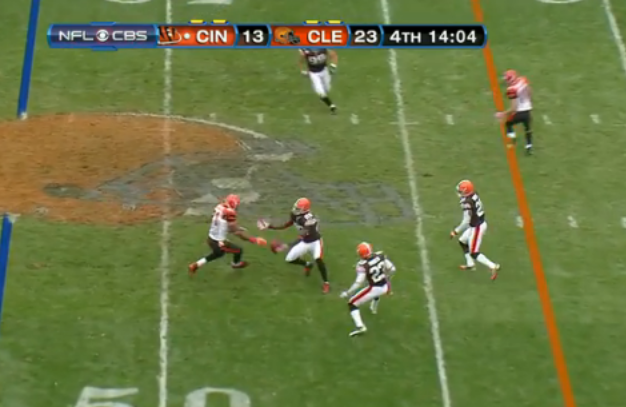 Still, its not all bad. Owens out-runs Haden to get to the ball for another 17 yards. 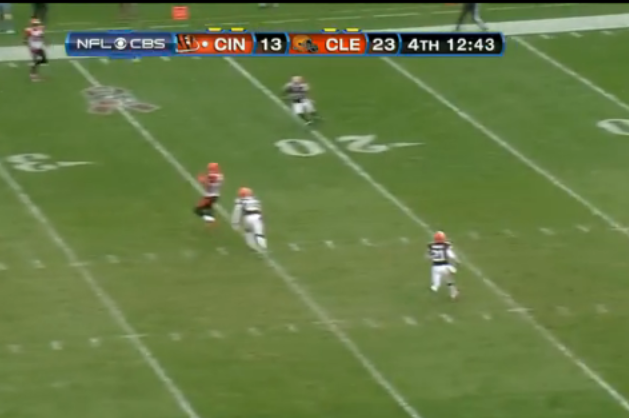 Final target to Owens on the day and it's the shortest gain of the game for him, just six yards. However, it was 3rd-and-5 so it wasn't an insignificant six yard gain.

All in told, Owens winds up with 10 catches for 220 yards and while 78 of the yards came on Brown falling down, it's not like he didn't earn a lot of his production. He was still bigger and faster than most corners on the field and Haden was the only corner that stood a chance on him and even then Owens gained over 30 yards when covered by Haden on two catches.

The good part about having Owens at this stage in his career is that if you're having him as your number two receiver, then there's a better chance that he's being covered by a teams #2 corner. So if hypothetically he was a Seahawk in 2012 and Sidney Rice was healthy, you could be giving a teams #2 CB a real handful. You can't ignore Rice or Doug Baldwin so Owens is going to get a lot of 1-on-1 and that's when he could still excel because of his size, speed, and hands.

Second, the Bengals went 4-12 in 2010. Nobody is going to ignore that. When Owens started to catch fire, starting with the game I just went over against the Browns, the Bengals lost ten games in a row. Yep, they lost ten in a row. When Owens missed the last three games, they went 2-1 and nearly beat the Ravens in the season finale. There's no way to say that Owens was the cause of the losses or that his absence helped them finally win again, but it's not going to be ignored. The Bengals also rid themselves of Chad Johnson and Carson Palmer by the next season and went to the playoffs. We can't just say that Owens is the only problem everywhere he goes, but we can't say that he's not a problem.

Third, this was almost two years ago and Owens didn't play in 2011. He has been training hard to recover from ACL surgery and often times players come back stronger, but it can't be ignored that he should be rusty after all of this time off. There's no way to tell how much he'll be effected by the off time, but it's something to take into account.

Watching this one game from almost two years ago, Owens looked like everything we'd love to see on the field this year from a number two. He was fast, versatile, hard-to-cover, and put up great numbers. He had that one drop, where concentration could still be an issue. He even taunted at the end of his 78-yard TD by slowing down and just placing the football into the end zone at the end of the run. He was still "T.O." and T.O has a reputation for being a locker room problem and a diva.

He will also walk into the Hall of Fame, love it or hate it, as one of the best receivers to ever play the game. If he can still play at 38 like he did at 36, he's going to have a very productive season. Whether he signs with the Seahawks, or someone else.

PS - Before the news that the Hawks had released Bryant or signed TO, I made this video about the new Seahawks WRs. So much for posting things in a timely matter!