Seahawks Win 27-7 With Strong 2nd Half

Share All sharing options for: Seahawks Win 27-7 With Strong 2nd Half

The Seahawks beat the Cowboys Sunday afternoon using the formula that Pete Carroll has unflinchingly endorsed since the day he arrived in Seattle. Relentless in the rush game, stingy on defense against the rush; strong special teams, discipline; force turnovers, win the turnover battle and time of possession game; employ a methodical, consistent offense that utilizes an explosive play here and there to keep the defense honest; 'finish strong' by playing your best football in the 2nd half.

Seattle rushed for 182 yards on 41 carries, led by Marshawn Lynch with 26 attempts for 122 yards at a 4.7 ypc clip. They asked Russell Wilson to throw the ball only 20 times, and he connected on 15 of those passes for 151 yards, including a huge 22-yard touchdown pass to Anthony McCoy with 5:12 in the 3rd quarter that put the Seahawks up 20-7 and securely in the drivers' seat. Wilson finished with a respectable 7.55 yards per pass attempt, and after a very shaky start, finished the game out strong and steady -- 'rock-solid' is the term that Pete Carroll has been using and a description I'd probably acquiesce to (leaning more toward solid over 'exciting' or 'great', while thinking -- zero turnovers, made throws/plays down the stretch, rookie caveats and improvement over last week). There were some very shaky moments, especially early on -- his severe overthrow on deftly executed play-action to a wide-open Evan Moore in the flats was the perfect illustration of his penchant to throw high, something that he still needs to rein in and something that we here at Field Gulls have talked about a lot over the last few weeks/months -- but Wilson played much more efficiently in the 2nd half. It's encouraging that in his first two NFL starts, Wilson improved as the games have gone on, but that said, he still left a lot of throws on the field and certainly looked like a rookie at times.

This game was a story of two halves, with the Seahawks being dominated in nearly every facet of the game in the first two quarters (except special teams, which I'll get to). The Cowboys picked up 11 first downs to Seattle's 5, had 211 net yards of offense to Seattle's 118 and were 6-of-9 on third downs, eating up a large portion of the 1st and 2nd quarters on a 15-play, 95-yard drive that pulled the Cowboys to within a score. The Seahawks' zone coverage schemes struggled against Romo and the Cowboys' quarterback escaped pressure on several very impressive spin moves as he made throws downfield to lengthen drives.

Marshawn Lynch had 22 yards rushing on 2.2 yards per carry as the Seahawks went into the locker room, and Seattle had gone 3-for-8 on third downs, struggling badly to maintain drives, including three three-and-outs.

However, special teams gave the Seahawks' a chance in the first half -- forcing a fumble on the game's kickoff to give Seattle the football at the Dallas 29, which resulted in a Seahawks' field goal, and then on the next Cowboys' possession, Malcolm Smith blocked a a punt, which Jeron Johnson recovered for a touchdown. Ten points from your special teams is really all you could ask for, and Seattle held a 13-7 lead at the half.

The second half was a different story.

Tony Romo passed for 81 yards on 9 of 14 passing in the second half, and Dallas' possessions went like this: 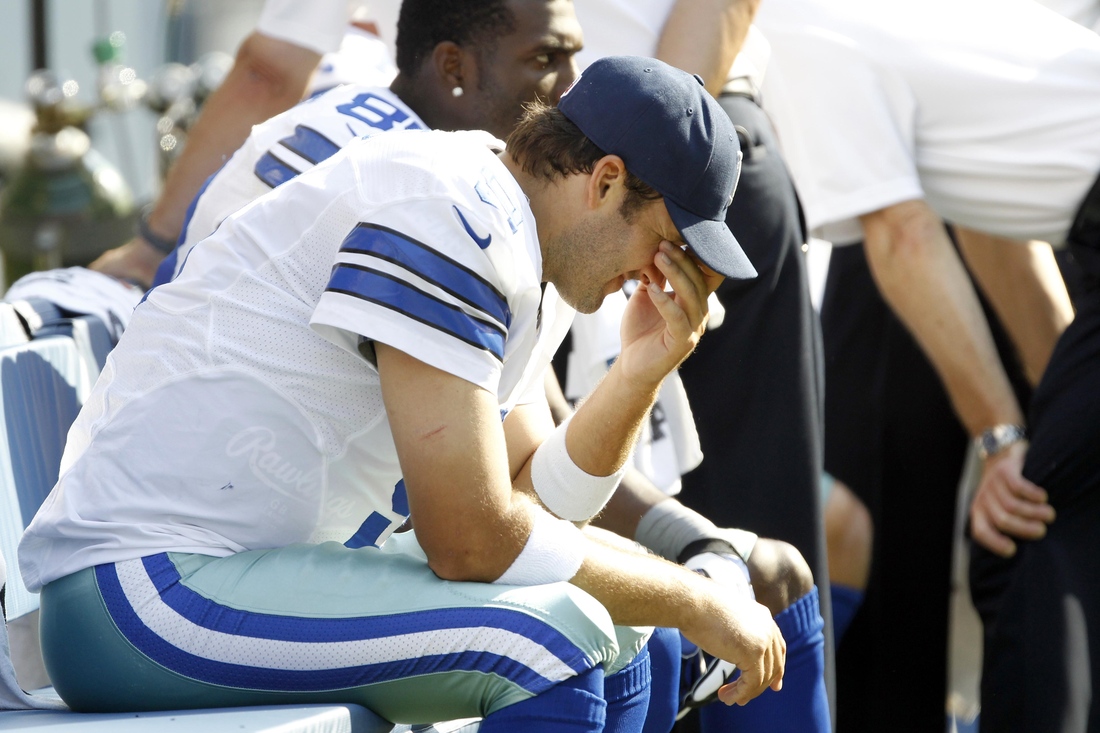 In the second half, the Seahawks held the Cowboys to 85 yards of net offense, including 8 total yards rushing on four attempts. DeMarco Murray was a non-factor, and Seattle cleaned up their third down defense to get themselves off the field quickly. Meanwhile, after rushing for 33 yards in the first half as a team, Seattle picked up 149 yards on 28 attempts, 5.3 yards per carry and ate away at the clock, winning time of possession in the 2nd half 20:57 minutes to Dallas' 9:03.

Anthony McCoy (5 catches for 41 yards and a TD) and Golden Tate (3 catches for 38 yards, including two huge first down catches on third down plays in the 2nd half that extended two key drives -- both of which ended in Seahawks touchdowns) had big games for the Seahawks, and Sidney Rice tacked on 3 catches for 33 yards, all in the first half. Marshawn Lynch looked great, grinding, moving the pile, and he also broke open a couple of big runs, including one for 36 yards.

On defense, the Seahawks' interior line again did their thing, holding the Cowboys' rushing attack to 49 yards on 16 carries (3.1 ypc). As I said earlier, I think the weakest area for the group thus far has got to be their zone coverage on 3rd downs, but otherwise the Seahawks flew around, made big hits, and looked to simply wear down the Cowboys as the game went on. In a pick-em league with some of my fellow SBN writers, I chose the Jacksonville Jaguars as a tie-breaker to score fewest points this week in NFL. So far I'm right - kind of - as the Jags were only able to put up seven points on the mighty Texans' defense. Tied with the Jags for lowest offensive output on the week, NFL-wide, were the typically high-octane offense of the Cowboys, who only managed seven points against an inspired Seahawks' defense. I'll take it - especially because I really do respect the Cowboys' talent - I like what they've done with their roster and think there's a solid chance this will be a playoff team. 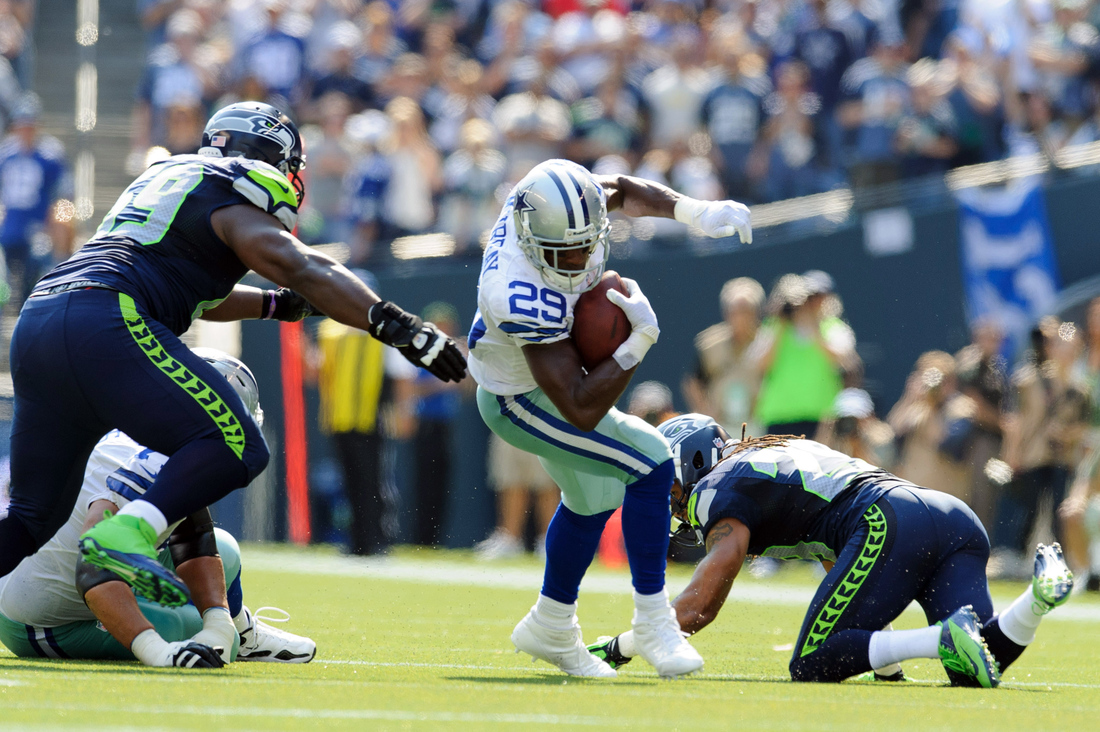 Overall, a great game for the Seahawks at home, as they get into the win column and back to .500 on the season. With Arizona's win in New England this afternoon as well, perceptions of this team's potential may be shifting back to the other side of the pendulum, and once again it appears that the formula the front office is committed to, though maybe not ideal -- 'ideal' would probably include an elite quarterback, something fairly difficult to obtain -- this formula gives this team a chance to compete week-in and week-out.

A lot of things left to clean up, obviously, particularly on offense, but a win's a win in the NFL, and this was a fairly dominant victory. Momentum now is important, as the Seahawks draw the Green Bay Packers on Monday Night Football, eight days from today.