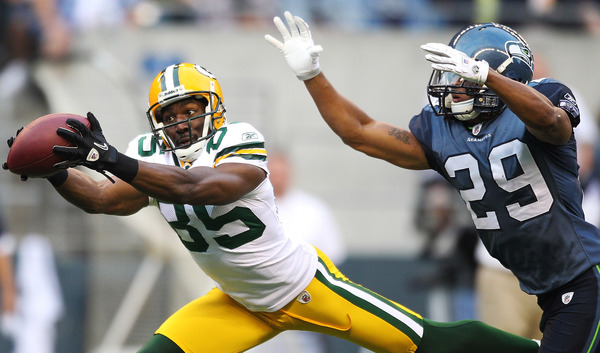 When I tell people I’m from Northeast Wisconsin, I get the usual "So, you’re a Packer fan then?" To which I must reply "I follow the Packers, but my favorite team is the Seahawks". What follows is a reaction probably akin to seeing the Bearded Lady at the circus for the first time. Initially there is a look of shock and bewilderment followed by disgust and revulsion. Finally, a sense of curiosity and wonder sets in before they ask the inevitable question "Why?" Short answer is Derrick Mayes, but I’ll get to that later.

The intention of this article is to look some of the connections between my hometown Packers and our favorite Seahawks from the Holmgren era on. Some of you may be familiar with them, but maybe there will be a few surprises. This is not meant to be an extensive look at each player/person, but more of a summary with a few fun facts strewn about. I’m sure I missed some players as well, so feel free to add them in the comments. Be forewarned that this article is turning out longer than I anticipated, but enjoy!

Mike Holmgren: Let’s get our favorite red-faced Walrus out of the way first. Holmgren was the GB head coach from 1992-1998 and left with a record of 75-34. GB won 2 NFC Championships and 1 Super Bowl under Holmgren’s tutelage. Wooed by the offer of greater front office power and the chance to rebuild a team, Holmgren joined SEA in 1999 as both the Head Coach and General Manager. He would lead the Seahawks from 1999-2008, compiling a record of 86-74 with 5 NFC West Championships and the 2005 NFC Championship. While most can agree that he had some questionable draft picks, none will deny his excellent coaching record in helping to build the successful Seahawks teams of the mid 2000’s.

Ted Thompson: Thompson worked in the GB front office from 1992-1999, but was lured to Seattle by Holmgren in 2000. Thompson worked his way up to VP of Football Operations with SEA and would stay through the 2004 season. He is generally credited with influencing the successful early 2000’s drafts that would help form the 2005 NFC Championship roster which included Shaun Alexander, Darrell Jackson, Steve Hutchinson, Marcus Trufant, etc. Thompson was hired by GB in 2005 to become their new General Manager following the unsuccessful coaching/GM stint of Mike Sherman. He has helped build the Packers roster into a perennial contender which includes the 2010 Super Bowl victory. Rumor has it that his parents are the Boo-Berry Ghost and an albino woman, but I couldn’t confirm that (pssst, he’s really fair-skinned).

John Schneider: Schneider creeped his way into an internship with Ron Wolf and the Packers in 1992 (seriously, if you don’t know the story look it up since it’s pretty funny). He would stay with GB through 1996 before moving on to other teams including a one year stint in SEA for the 2000 season. Schneider would return to GB in 2002 and work his way up to being one of Thompson’s right hand men (along with Reggie McKenzie, the current Raiders GM). Seattle pried Schneider away from GB in 2010 to lead a roster overhaul along with Pete Carroll. While the jury is still out on how successful the pair will be, I think we can all agree that the current talent level is light years ahead of where it was when Schneider was hired. Fun fact: John Schneider is actually from the Green Bay area, making him one of the greatest people born in Wisconsin along with Chris Farley and Usain Bolt (no need to research that one, it’s true…trust me!).

Pre-Holmgren Era (I know I said Holmgren era on, but just this one since he deserves it!)

Derrick Mayes: As I mentioned previously, he’s the reason I started following the Seahawks and was actually my first SEA jersey (don't ask about my jerseys, I’ve stopped buying them since the players I get always tank). Mayes was drafted by GB in the 2nd round of the 1996 draft after a record setting career at Notre Dame. He managed only 54 catches for 730 yards and 5 TDs in 3 years with the Packers. Holmgren still thought enough of Mayes to acquire him for a 7th round pick. In 2 seasons with the Seahawks, Mayes caught 91 passes for 1093 yards and 11 TDs. Unfortunately, Mayes would not play in the NFL after the 2000 season, though my jersey still hangs proudly in the closet next to Anthony Simmons (thought about repurposing this into Tatupu, but could now be Bruuuuuuce though I won’t jinx him like that) and Michael Boulware.

George Koonce: Originally a UDFA for Atlanta in 1992, but was cut before the season and joined GB. He played for the Packers through 1999 amassing 433 tackles, 7.5 sacks, 4 INT, and 6 fumble recoveries. SEA signed Koonce for the 2000 season and he responded with 74 tackles, 1.5 sacks, 1 INT, and 1 fumble recovery.

Ahman Green: 3rd round pick by SEA in 1998. Green was in SEA through 1999 and gained 331 total yards with 1 TD and 3 fumbles. The Seahawks still had Ricky Watters and drafted Shaun Alexander in 2000, so they traded Green and a 5th rounder to the Packers for Fred Vinson and a 6th rounder. Green would play in GB from 2000-2006 and again in 2009. He gained 11,048 total yards, scored 68 TDs, and made the Pro Bowl from 2001-2004 during his time with GB. Fred Vinson, on the other hand, tore his ACL before the 2000 season and would never play another down in the NFL. He is the cousin of former NFL’er Corey Chavous, however, so at least he has that going for him.

Matt Hasselbeck: Before he wanted the ball so he could score, he was drafted in the 6th round by the Packers in 1998. Matthew would stay in GB through 2000 and total 145 yards passing with 2 TDs (one being on a fake field goal if memory serves me correctly). Holmgren saw enough in the young, balding Hasselbeck to trade the a 1st round pick (10th overall) and 3rd round pick in the 2001 draft for the young QB, a 1st round pick (17th overall) and a 7th rounder. The Seahawks clearly won this trade as Hasselbeck would throw for 29,434 yards and 174 TDs, rush for another 1129 yards and 8 TDs, and make the Pro Bowl in 2003, 2005, and 2007. Hasselbeck will go down as possibly the best QB in franchise history and is still loved by Seahawks fans to this day in spite of the aforementioned playoff proclamation. As a side note, the 17th overall pick became Steve Hutchinson, while GB picked Idris Jamal "Too Small" Reynolds with the 10th overall pick. With the evolution of defenses today, it makes me wonder if Reynolds would have a place as a rush end/OLB. He measured in at 6’3" 270lbs and ran a 4.72 40 at the combine. I digress as this article will be long enough without my rambling.

Koren Robinson: Robinson was the Seahawks other 1st round pick in 2001. He played for SEA from 2001-2004 and again in 2008. While he was known for getting in trouble off the field, he managed to total 3567 receiving yards and 14 TDs during his time with the Seahawks. Robinson joined GB in 2006 after his Pro Bowl 2005 season with the Vikings. He played with the Packers in 2006 and 2007, seeing time mostly as a kick returner.

Tracy White: Joined SEA as an undrafted free agent in 2003. White would be with SEA through 2004 as mostly a special teams stalwart. He played for GB in 2007 filling the same role.

Marquand Manuel: Originally a 6th round pick by the Bengals in 2002, but claimed off waivers by SEA in 2004. Played through the 2005 season and took over the FS position in the Super Bowl season after Ken Hamlin was injured. Unfortunately, Manuel was also injured during SBXL which did not help the Seahawks chances. Manuel joined GB in 2006 as a UFA and had a solid season with 62 solo tackles and 1 INT that was returned for a TD. He’s currently the Assistant Special Teams coach for SEA, so I’m attributing some of the success of Leon this season to Manuel’s tutelage!

Mike Wahle: Drafted in the 2nd round of the 1998 supplemental draft by GB. Styrofoam Wahle (a clever nickname during his brutal rookie season) became one of the best OG in the league during his stay with the Packers through 2004. SEA signed Wahle in 2008 and he unfortunately regressed to his earlier Styrofoam state, though in his defense he was beginning to slow down due to injuries at that point.

Jon Ryan: Signed by GB in 2006 after 2 years in the CFL. Ryan played in GB during the 2006 and 2007 seasons before he was inexplicably released just before the start of the 2008 regular season. No one in GB really knew why and this may be one of Ted Thompson’s worst personnel moves (if you think I’m joking you best check yourself before you wreck yourself. Ryan is legitimately one of the best punters in the NFC if not NFL, and GB struggled with Derrick Frost and Jeremy Kapinos before finding a pretty good one in Tim Masthay now). Our beloved Seahawks snatched Ryan off the street and we couldn’t be happier with our Giant-legged Ginger. We do need to see more Ryaning in the NFL, however.

Allen Barbre: Drafted in the 4th round of the 2007 draft by GB. Barbre was with GB through 2009. He was signed by SEA in 2010, but was released and joined the Dolphins. He was brought back to SEA in 2011 and is currently on the reserve/suspended list for the first part of the 2012 season.

Ruvell Martin: Entered the league as a UDFA for SD in 2004. Martin was with GB from 2005-2008. SEA signed Martin in 2010 and he played a pivotal role in final game of the season against the Rams where he caught 3 passes for 85 yards as the Seahawks clinched the NFC West Division Championship.

Breno Giacomini: Drafted in the 5th round of the 2008 draft by GB. He spent time on the Packers practice squad until SEA signed him in 2010. Breno was released by SEA, but later brought back and is the current starting RT. Oh, and he’s also a big Russian according to Beast Mode.

Atari Bigby: Entered the league as a UDFA for MIA in 2005, possibly because of his awesome first name. Bigby was signed to the GB practice squad during the 2005 season. He played with GB through 2010 and collected 10 INTs and countless injuries during that time. Bigby joined SEA in 2011 and played the important 3rd safety role last season. Thankfully, SEA drafted Winston Guy in the 6th round this season for the same role and gave him Bigby’s old #27 so as not to confuse the 12th Man when they saw another dreadlocked 3rd safety roaming the big Nickel package.

Evan Moore: Originally a UDFA in training camp with GB in 2008. Moore was injured during camp and placed on IR. He also suffered an injury in the 2009 camp and was cut, but joined the Browns during the season and stayed with CLE through the 2012 training camp. The Seahawks signed Moore just before the 2012 regular season.

So, for the 3 of you still reading I appreciate it and hope you enjoyed this little case study. As I said, there are probably more that I missed, but I wanted to focus mainly on the Holmgren era to present and show that there really are a lot of connections between the Packers and Seahawks. Needless to say, it should be a very interesting game Monday night. Go Hawks!