A Catch, A Ref, The Def: Seahawks Win Over Packers Marks Historic Moment For 2012 Season

Golden Tate's "catch" will forever go down in NFL infamy, but there was so much more to this game to remember.

Share All sharing options for: A Catch, A Ref, The Def: Seahawks Win Over Packers Marks Historic Moment For 2012 Season

Now that there has been time to let everything calm down a little bit and we've all had a good moment to breathe and get ourselves composed, I just want to say that "HOLY SHIT DID THAT JUST HAPPEN?!"

After a game, I'll sometimes struggle with trying to find an angle to talk about or a story to focus on. Sometimes it's obvious, like the Cardinals game where you want to attack the final drive from difference angles. Other times, it's just really boring and you're finding yourself going off on tangents about the Curiosity Mission or Growing Pains. (That's me distracting you from trying to write about a crappy game against the Browns.) But after this game, I found myself with so many things that I wanted to say and yet being entirely unable to compose a single thought other than, "Holy Shit."

I think that just like the replacement refs, I'm going to have to wing it. Go with my gut, even when it's wrong. Take chances and shuck responsibilities for my errors with the utmost confidence that I'm doing the right thing despite my many faults. This is the NFL, baby.

I think I'll start with that.

- The most confusing thing about this win is that while I jumped for joy after the referee came out of the review and officially ruled it a touchdown, I was simultaneously disgusted by the display of officiating. Or lack thereof. Or over-abundance of, depending on the moment we're going to talk about and there were plenty of them.

If you've ever watched the games and thought to yourself, "That seems like a difficult job, I wonder how I would do at it," then you've got your answer. This is what it looks like when people come off of the street and officiate a football game. I want to say that is a total exaggeration but tell me that there haven't been moments over the past seven weeks that made you wonder if some of these guys don't have the slightest idea what they are doing.

It's been too soon for me to re-watch this game in its entirety and frankly I'm scared to do so. It wasn't just a play, it was awful officiating for sixty 240 minutes. Or at least that's how long that game felt. I'm worried that I'll lose respect for the game I love when I re-watch this game without any emotion attached to every play since I know that no matter what happens, we win. It's that look back on a game that gives you a better chance to reflect, like watching Memento for the eighth time, and I kind of don't want to reflect on this. Not on the refs at least. This is going to be a moment of time that the NFL would probably soon rather forget, but even if the deal gets done in time to bring the real guys back by week 5 (week 4 wouldn't be possible, I don't think) it'll be too late.

I think we can all agree that the Ed Hochuli's and Mike Carey's of the world (real refs) make mistakes and sometimes they are egregious. People have pointed to the Calvin Johnson touchdown, and if that was called by the replacements we would be sitting here saying something very similar about how these guys are unqualified to do the job and yet that was a call made by the guys that are on strike. The difference though isn't in one mistake. We all make mistakes. This morning I put my bagel in a coffee cup and my coffee on a plate. It's about continuous errors in which sometimes the refs themselves look more confused about their own calls than we do.

I am so grateful that I can write about this as a Seattle fan and after the week I had with college football disappointment, I don't know how long it would take me to recover if that was Greg Jennings instead of Golden Tate. But it doesn't mean that I also can't sit here and say that I'm disappointed in this entire mess. It's not about just one catch (that sure, might still actually have been a catch) it's about the entire game, the entire season.

- The irony of it all is that if Golden Tate actually did manage to come down with tied possession at the precisely correct time, that makes the white guy the greatest ref of all time.

- I also like how we sort of assume that in the afterlife, the truth about every call will be revealed to us as if there is a higher governing body watching all NFL games. The fact of the matter is that in cases like this, humans decide. There is not a 0% chance that Tate caught the ball, like there is a 0% chance that Russell Okung didn't false start all of the time, there's an argument to be made in favor of the catch. Even if it's 25%, even if its 1%, the humans decided it was a touchdown.

Wait, is this the beginning of Skynet?

- Lost in the call, is the effort made by Tate. Remove all of the elements that surround the controversy of the call and just focus on Golden Tate. I said before the game that I hoped one of the Seattle receivers would step up and make some plays and that's just what Tate did. First on displaying his speed and route-running ability on the first half's only score and then yes, on the final play of the game.

One can dispute that Tate made the catch, but one can not dispute that Tate didn't put forth maximum effort on the play. It looked to me like he timed his jump perfectly, he just doesn't have the height necessary to have made the catch outright. He got as much of his hands on it as he possibly could at the time of contact. He had the strength to pull a ball somewhat into his body that many people do not.

- Let's not stop these thoughts on the game without talking about the one thing that ESPN refuses to talk about: Seattle's defense.

It was their only loss of the year.

The second time that they scored under 24 points, they lost to the Giants 37-20 in the playoffs. The Packers are 3-5 over their last eight games and they've scored under 25 points five times. It may just be that their window of a Packers dominant offense has closed as teams have caught on to how they managed to score so prolifically.

This isn't going to stop the Packers from putting up bunches 'n crunches of points against a lot of teams, but it is going to stop them when they play teams with defensive talent like San Francisco, Seattle, New York. Do you know what the really means though?

I'd say we do have that elite defense we were hoping for. Pete Carroll and John Schneider's plan has worked out on one side of the ball.

Rodgers was 26-of-39 for 223 yards and no touchdowns, 5.72 yards per attempt. He's going to complete a high percentage of passes because he's not taking very many shots downfield. Their game is within 10-15 yards, almost exclusively. Unofficially, only two of Rodgers 39 pass attempts were over 15 yards. If you have containment within that zone though, you're going to have a very good chance of keeping the Packers under 30 points.

If you want to find the last time that Rodgers posted such a low Y/A in a full game, you'd have to go all the way back to Halloween night, 2010 against the Jets when Rodgers was 15 of 34 for 170 yards in a game that the Packers won 9-0. However, the moral of the story has already been set and that moral is that the Packers are fairly beatable when you contain the gains on Rodgers throws into the plains.

He's going to complete 65-70% of his passes. Let him. It's what you do after the catch that really matters. I'm in awe of the team that has been constructed to play defense for Seattle, it's going to make it's case in 2012 as the best we've ever seen in the Northwest.

Lay the names out and loosen your top button:

A secondary that we already knew about: Earl Thomas, Kam Chancellor, Brandon Browner, and Richard Sherman.

A defensive line that's emerging as one that not only stops the run as good as anybody in the league, but now provides pressure to collapse the pocket and either force the QB into a bad position, or crumples him to the ground like my grandma on Life Alert: Brandon Mebane, Red Bryant, Alan Branch, Jason Jones, Bruce Irvin, Clinton McDonald, and Chris Clemons.

And a linebacking crew that's growing and getting better and has an emerging star in K.J. Wright to go along with Bobby Wagner and LeRoy Hill.

How many of these guys do you want to replace? Not to mention the fact that I just named 14 players for "11" positions. The only time that Seattle faltered on defense was when they were caught off guard by the Packers adjustment to run-run in the second half, but they also might not have been caught off guard at all. I was frustrated that they missed a couple of tackles on Cedric Benson but at the same time I thought to myself, "These are the Packers?"

Oh shit, we just forced the Packers to go to the run!

We forced them to play our game and to not play the style that they're used to. Your best player is Aaron Rodgers and I think we shook your confidence in that working a little bit. Are you kidding me? That's a big part of why Green Bay didn't come out in the second half and drop three touchdowns on us. Instead, they dropped two field goals first and Seattle's terrible offense was in a position to win not once, but twice.

The Packers first half drive charts (13 yards, 15 yards, 3 yards, 31 yards, 20 yards) are an absolute thing of beauty. Did they reel off three long drives to take the lead and eat up most of the clock in doing so? Yeah, but they didn't take a 21-7 or 17-7 lead, so they left the door open for a finish that they'll never forget.

Take it back another week when the Cowboys scored 7. Take it back another week when the Cardinals were stopped over and over again until Kevin Kolb came in and messed up our mojo. Either way, if you're going to tell me that Seattle is going to have one or two bad defensive drives a game while forcing three-and-out after three-and-out, then I'm telling you that it's time for me to steal buy some playoff tickets.

We won't need any bad refs to get us to the playoffs if this is going to be our defense all year, we can do this on our own. 2-1, baby.

And here is really the most telling angle and picture of the catch. Look very closely at the top left hand corner: 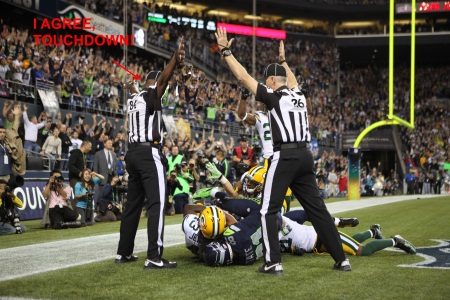