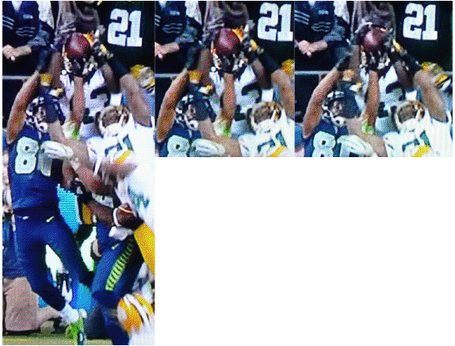 Three consecutive frames, at 60 fps. First frame shows Tate's hand under the ball, with Jennings' hands on either side. Note you can see the yellow of Jennings' helmet on either side of the ball (between the ball and the gloves) in the first two frames, and then his hands contact the ball in the third frame. Note that the ball has stopped on Tate's hand in the second frame, 1/60th of a second before Jennings grabbed the ball. Tate made contact with the ball first, with his left hand, and never in the play is there any evidence that Tate's left hand lost contact with the ball. EDIT: Veilside posted this video in another thread, but it's pertinent evidence here that Tate did indeed touch the ball first, and controlled it's descent. 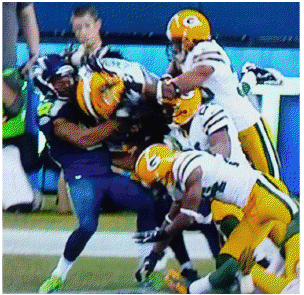 Momentarily, Tate's right hand comes off the ball on the way down, but these three pictures (1 above, 2 below) show that Tate's right hand is "back in the basket" and presumably on the ball. In these frames, Tate has "two hands" on the ball and two feet on the ground, all he needs is a football move to make it a completion. In contrast, at this point Jennings has not made contact with the ground. The two lower shots are each the frame before Jennings first foot flexes as he lands.

These images show the pile rolling to the ground and you can see Tate fully on his back, with 4 sequential shots showing his head rolling back to the ground. Tate's right hand is on top of the ball. 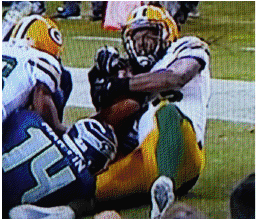 In summary, Tate made a one handed catch by stopping the descent of the ball with his left hand; his left hand remains in contact with the ball through the catch. 1/60th of a second later, Jennings started a move to wrest the ball away from Tate before Tate could hit the ground, but he never pulls it out of Tate's left hand. Tate had two hands on the ball and two feet on the ground before Jennings had established contact with the ground (even though only one hand is required for a catch). Tate had already made the catch/completion (controlling the ball, two feet inbounds, and a football move) at the moment that Jennings established two feet, but before Jennings had completed the catch. Well after Tate had completed the three acts necessary for it to be ruled a catch, and after a touchdown had occurred, Jennings wrested the ball away.

The simultaneous catch rule does not have any stipulations about degrees of control or degrees of possession. Any argument based on the fact that Jennings looked like he had "more control" isn't clearly recognized in the rule book on simultaneous catches (although it clearly plays a role in fumble recovery calls). The rule stipulates when players establish "simultaneous control" the rule applies - it does not stipulate equal control. You may disagree with the way the rulebook is written, but to me it is very clear that the play can be easily interpreted as a simultaneous catch.

I firmly believe that both players caught the ball, and both had control, and that by the simultaneous catch rule, it was a TD catch. The rest of the play aside (OPI, Matthews roughing the passer by driving Wilson into the ground), I think it's a very good play by Jennings, a great play by Tate, and a correct (even if lucky) call by the refs.