What a crazy few days! I have attached the salary cap for the Seahawks' defense, as it stands now, for 2012 and 2013. Once the TE Evan Moore deal goes through, I will publish the offense as well, and gather other thoughts. Some defensive thoughts:

(1) The Seahawks are spending $40,444,926 in Cap Dollars on Defense, while spending over $60M on Offense. The defense is the better constructed part of the team in terms of salary, age, and contract length/club control. The defense is Pete Carroll's specialty and the Seahawks have spent 20 of 28 Draft picks on the defense in Carroll's tenure. It is the younger, cheaper and better side of the ball, statistically. As a "watcher" of Seahawk football, it is also the side that is more impressive when watching games.

(2) The highest paid cornerback, Marcus Trufant, at a modest $1.3M, is not signed in 2013. The same goes for the highest paid linebacker in Leroy Hill. Hill is earning $1.6M in cap dollars and is not signed in 2013. The three oldest Seahawks on the "back 16" (LB + DB) are Trufant, Heath Farwell and Leroy Hill; Trufant is 31 years old, Farwell is 30, and Hill is 29. Farwell is earning $1.167M in cap dollars in 2012. I could see all three being replaced by younger draft picks in 2013. If they are retained, all three are still rather affordable in the grand scheme of the NFL.

(3) Both Chris Maragos and Clinton McDonald could be replaced in 2013 with draft picks, but if not, they will be affordable Restricted Free Agents, so the Seahawks maintain control of these important depth players.

(5) I don't know what Thomas' cap figure for 2013 is, but I estimate around $6M. I believe Kam is eligible for an $800k escalator in 2013 with playing time goals that he should very likely hit. I collect information on contracts year-round from radio and twitter and from internet from sources like Brian McIntyre, Mike Sando, John Clayton, Curtis Crabtree and other websites such as Spotrac.

Each year I ask Sando what Earl and Okung's cap figure is and he graciously sends it to me (damn 2010 1st Round Rookie Old CBA Contracts are awful to calculate). The other contracts are all fairly easy, and the numbers here reflect base salary, signing bonuses pro-rated over the contract and roster bonuses. Performance bonuses are usually not included.

(6) 60% of the money, $24M of the $40M, is spent on the defensive line - which is 36% of the entire defense. In fact, 52% of the defense salary cap is concentrated in the hands of five players (Jason Jones, Alan Branch, Brandon Mebane, Chris Clemons, & Red Bryant). I don't need to talk about how important defensive line play is, and how hard it is to find good defensive lineman - they are rare "big, fast guys". They occupy lineman to allow the linebackers to flow and they pressure the QB allowing the secondary to ballhawk. There is obviously a huge emphasis on the importance of D Line play and the money shows.

(7) Seahawks should probably draft another two defensive lineman in 2013, and a total of 5 defensive players in 2013. One for every position group would be ideal unless the draft falls away from them. Jones and Branch are both free agents, and Clemons deal balloons to $8.166M on a cap basis (doubling) with only about $1.5M of that guaranteed in 2013. I predict the Seahawks will draft another "Leo" in 2013 as well as another "Two-Gap" defensive tackle and re-sign Jones. If they can get Branch at good value- he may even stick around- but it could be a "one or the other" thing with Jones and Branch.

(8) As a review, Seahawks could likely draft 5 defensive players in 2013; they hold 10 picks right now, I believe. If the board behaves itself - a simple recipe could be - in no order: (1) a Leo (2) a two-gapping DT (3) a Weakside Linebacker (4) A backup Free Safety (5) another Corner (can never have enough, it seems). The biggest free agent decisions will be Jason Jones and Alan Branch. Lesser decisions will be what to do with Leroy Hill and Marcus Trufant. The darkhorse decision will be to pay Clemons $8.17 in salary cap in 2013 when only $1.5M of that is guaranteed.

Here is the Seahawks Salary Cap for the Defense. [View Larger Here] 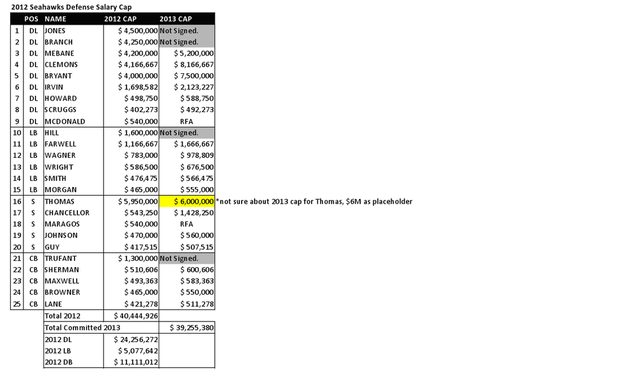