What you are about to read is an intro to "Eight Simple Things About Arizona" but what you are going to get instead is one simple thing about John Skelton. After Cardinals fans so adamantly suggested that he was simply amazing in the fourth quarter, I decided to take a closer look. I had forgotten how dramatic the results were so my first "thing" turned into my only thing. This is why we can't have nice things.

So this is an intro to something that it is not but I wrote it and it's not going away now!

During one summer break I had ventured down to Arizona to pick up my mom's old car so that I'd have something to drive around Pullman which is totally necessary for those trips to WINCO. It was my first time ever going to Arizona and so all I knew to expect was that it would be hot. Some of the things that I will remember are my first ever trips to El Pollo Loco and In-N-Out. I realize that everybody by now is familiar with In-N-Out, and yes it is amazing, but did you know about El Pollo Loco? A worthy substitute for Taco Time down here in California, and those are two of my favorite places to eat here.

But some of the other things I'll remember are.... are.... That's it! Oh yeah, and the explosive heat that keeps you indoors at all times until you have to make a trip somewhere and everyone has those limos with pools in them because that's the only way you're able to travel without dying. Arizona reminds me of my favorite Sam Kinison bit.

But Arizona isn't all bad. They've got an In-N-Out.

The Seahawks will be travelling down to Phoenix on Sunday to open up the season and I'm so damn excited, I refuse to hide it. The 2012 season is some number of hours away from the time that you read this and then the words we've been speaking on this team for months will turn into either one of two options: Put up or Shut up.

So throw on your Seahawks tank tops, shorts, fanny-packs, SP500 Banana Boat, misters, visors, a backpack full of only water with a tube for constant consuming of said water, and hop in the pool limo because we're headed down to Arizona to take a look at these Cardinals.

Dessert Has Two S's Because You Want More Of It. Skelton Only Has One S. You Do The Math.

Quarterback competitions aren't something we are unfamiliar with here in Seattle right now. Russell Wilson won a job. John Skelton took the route of not being Kevin Kolb, a popular route for many quarterbacks right now.

151 of 275, 54.9%, 1,913 yards in eight games, 11 TD, 14 INT, 6.96 Y/A, which is just a rough estimate of how he did but Arizona fans will attest to his fourth quarter fortitude, or fourthquartertude. Because John Skelton is like the opposite of LeBron James. Skelton is like a shitty father that wants to atone for his mistakes because he disappears for the first three and then shows up for the last.

However, I haven't gotten an actual look at his fourth quarter numbers and boner alerts so I had to do some research and remind myself what had happened last year:

Week 9 - It's a battle between the 1-6 Rams and 1-6 Cardinals. I can't even believe that looking back now but it's true and this was Skelton's first game of 2011. I've found my first "boner alert."

Skelton goes 20 of 35 for 222 yards, 1 TD and 0 INT but Cards trail 13-6 going into the fourth quarter. Arizona had four drives in the first half, three of which resulted in punts and one of which resulted in a field goal but started at the Rams 37 yard line. They opened with a 58-yard drive and another field goal in the first half but then phenomenally, John Skelton had two consecutive safeties marking the first time in NFL history that a team had scored four points in a quarter.

When I say that Skelton had a safety, that almost sounds like a good thing, but he is the quarterback.

I'd wager that Skelton and Larry Fitzgerald also weren't on the same page for this one, which could be just because Fitz had mostly worked with Kolb or because he just wasn't very accurate, but Fitz was targeted 12 times and ended with 4 catches for 43 yards. He was 0-for-3 on deep targets to Fitzgerald and had mostly just hit him short left, including his fourth quarter touchdown.

Oh right, we were talking about the fourth quarter. That's what I started this.

Skelton was 0-for-4 to begin the fourth quarter and they had to punt from the Rams 36. 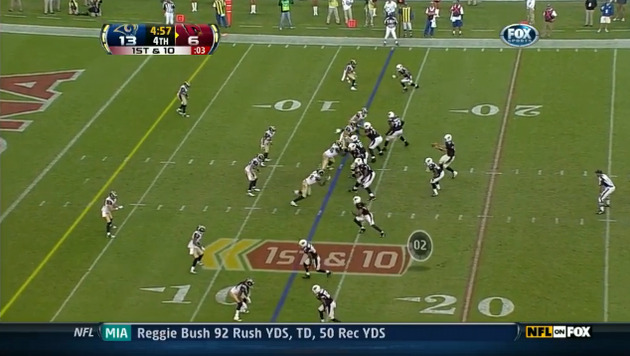 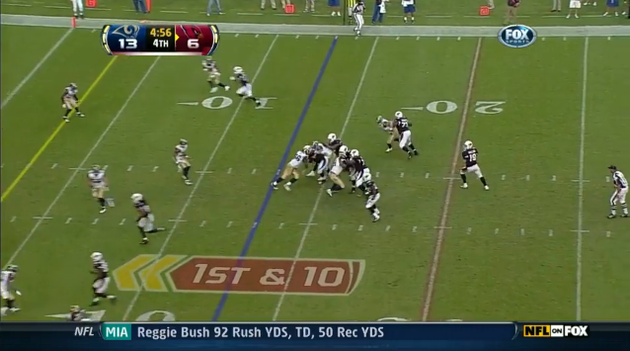 Skelton drops back. You can see Fitz streaking up the seam, Laurinaitis in tow. 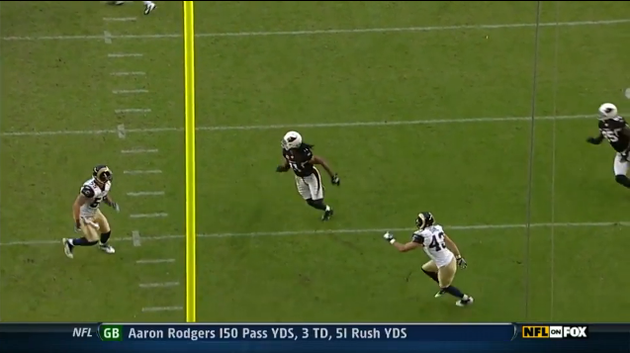 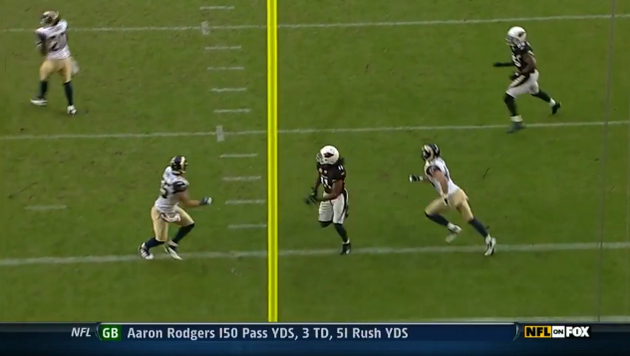 Whoops. (above) (the ball has just been thrown) 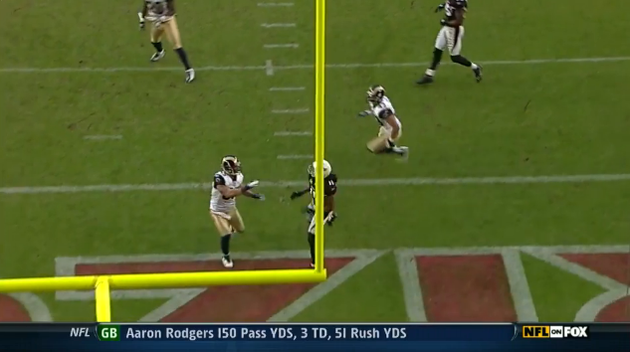 I dunno. Maybe Skelton would have thrown it to Doucet, right? Either way - it was a bad play by Dahl. A good throw by Skelton. A great catch by Fitzgerald. An excellent use of scheming by the Cardinals. Fitzgerald was essentially playing big slot/move tight end there to create a mismatch nightmare. 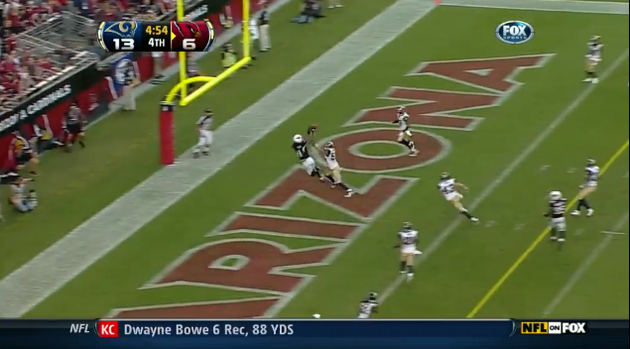 This drive included two fourteen-yard scrambles and the game is tied.

Next drive, starting with 1:41 left in regulation: 2-for-3 for 23 yards but drive was stalled when Skelton was sacked for a loss of 11 and fumbles but recovers it.

Heading into the fourth quarter, the desperate Eagles lead 14-7 at home. Skelton puts together some better drives before the fourth quarter. Drives of 45 and 49 in the first quarter end in missed field goals. A ten-play, 84-yard drive at the end of the half that results in a touchdown. They would also punt six times and Skelton threw an interception to end another drive.

Drive 2: Skelton is 0-for-2 with an interception 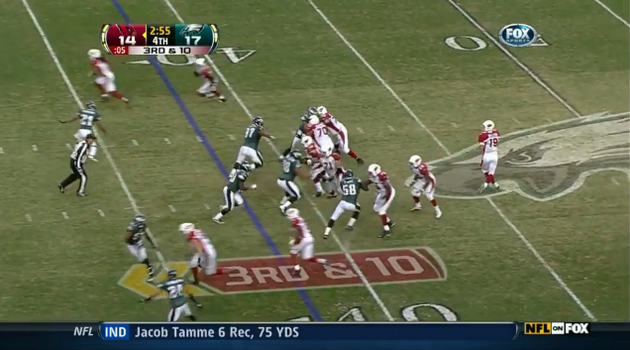 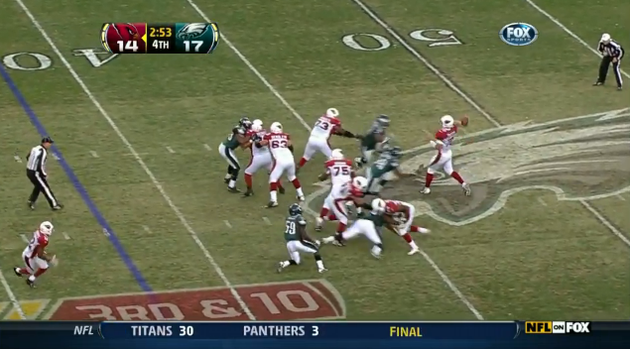 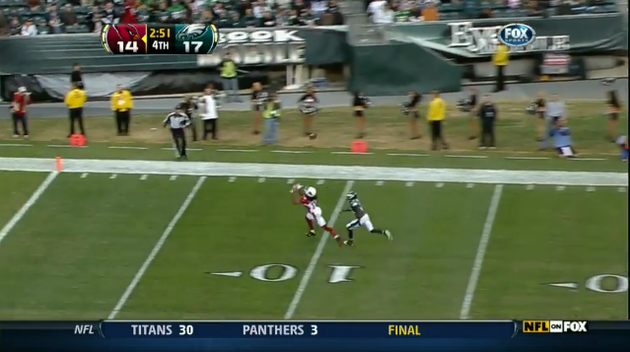 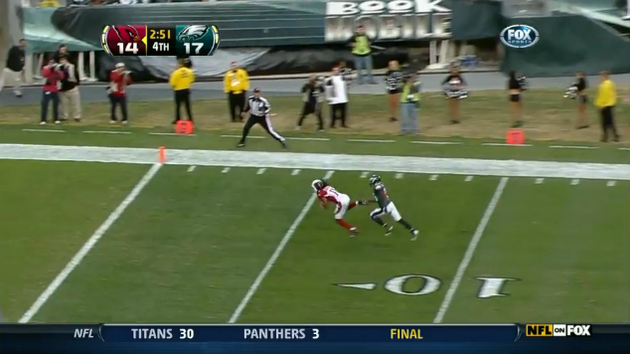 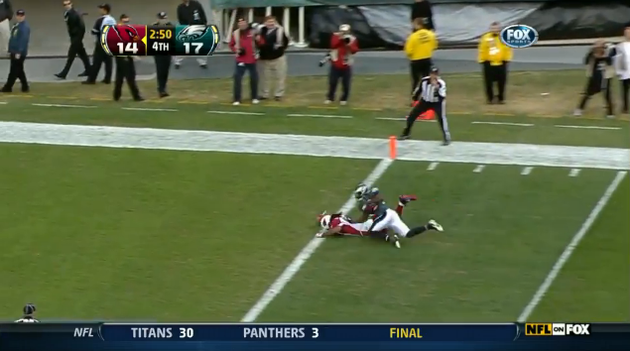 Fitz called down at the one. This ended in a swing-pass TD to Early Doucet to take the lead with 1:53 left.

Words, "Quarterback controversy" are now being thrown around heavily.

No fourth quarter comeback as the Cards lost 23-7. Skelton doesn't play the fourth quarter because he gets benched after going 6-for-19 for 99 yards, 0 TD and 3 INT. That's probably why there wasn't a comeback because Skelton didn't get to play the only quarter he is apparently good in!

Skelton has a terrible game again, finishing 12 for 23, 114 yards, 0 TD and 2 INT. There was no extra special play in the fourth quarter despite the game being tied at 20 with less than eight minutes left. Beanie Wells takes the game over though, rushing for 228 yards and the Cards win 23-20.

Well, now it's official. The Cards beat the Cowboys 19-13 and now we know Skelton is for real! Wait! What's this?! Doth my eyes deceive me?!! Kevin Kolb starts the game, going 16 of 25 for 247 yards, 1 TD/0 INT and the Cards make a comeback in the second half to force overtime when Kolb hits LaRod Stephens-Howling for a 52-yard touchdown.

I think we can all agree that it was sweet of Skelton to put on a Kolb jersey and pretend like Kolb could do what only he could do.

Weeks after getting dominated, Skelton gets red dead redemptioned. Deep middle pass to Doucet goes for a 60-yard TD in the second quarter and he hits Fitzgerald in the middle for a 46-yard touchdown in the third. Skelton also throws interceptions in each of those quarters and the Cards trail 19-14 in the fourth.

Drive cont'd - Short pass right to Fitzgerald goes for 53 yards. Skelton is 3-for-3 for 65 yards and a TD. Not much else really happens for the rest of the game. Cards win 21-19.

Second drive - Starts at the Browns 5 after a Seneca Wallace fumble. Skelton sacked on the first, incomplete on the second, complete for -4 yards on third and a five yard field becomes a 33-yard field goal to tie the game.

1-for-3 for 9 yards on a desperation final drive. Overtime starting.

OT - Patrick Peterson returns a punt 32 yards to set it up at the Cleveland 40 yard line. Skelton hits Fitzgerald for 32 yards to setup a short game-winning field goal.

The Cardinals trail 23-0 going into the fourth quarter. Skelton was abysmal again and six of their nine drives ended in a punt with three ending in an interception. It was much like the game he got pulled in weeks before except this time Richard Barton didn't get called in to help. Like I said, you got to give Skelton a chance to play the fourth!

Cedrive Benson fumbles on the first play and Calais Campbell recovers to give Arizona a ridiculous chance to tie this game up with 3:04 left on the Bengals 22.

There's just not enough time left by the end...

Despite the game being tied at 20 after a Ricardo Lockette 61-yard TD, Skelton decided not to take the lead in the fourth quarter with two stalled drives, and Skelton went 2-for-6 on those drives for 24 yards, both ending in punts.

On the OT drive by Arizona that ended the game, Skelton was 4-for-4 for 51 yards but what's interesting was that the Cards ran it seven times with LaRod Stephens-Howling. Seattle couldn't stop them on 3rd or 4th down, unfortunately.

And that was the end of the season, with the Cards going 6-2 in the eight games that Skelton played in and this earned him the reputation of a quarterback that wins, shows up in the fourth quarter, yadda yadda yadda. The sponge. No soup for other teams.

It's kind of amazing just how much of Skelton's reputation and respect comes from the fourth quarter of games because he really has had some crappy 1st, 2nd, and 3rd quarters and every game was ridiculously close.

The Cardinals' average margin of victory in those six wins was 3.5 points.

Skelton threw 11 touchdown passes on the year, six of which came in the fourth quarter.

My takeaway from all of this about Skelton (and it's a takeaway so you know its not the fourth quarter) is that I'll gladly have the Seahawks face a team that trails going into the fourth quarter 75% of the time. I apologize for not getting more time to watch the games, but Skelton took a lot of sacks, scrambled, and with the offensive line looking potentially worse this year, that's great news for Chris Clemons, Bruce Irvin and the rest. With Skelton throwing so many interceptions (think about it again... 14 interceptions in half of a season) it's also great news for the Seahawks elite secondary.

Does that mean that the Seahawks are golden? Not entirely, because Golden Tate is OUT. But also there's going to be some concerns with Seattle's offense against that Cardinals defense and also Seattle's special teams against Patrick Peterson.

My feeling is that unless Skelton takes some magical elixir at the start of the fourth quarter, this kind of production is not sustainable, nor is it directly attributable solely to his play. I understand why Cardinals fans are hopeful of Skelton because he's big, young, and though rather raw, at times (4th quarter!) exciting. But, as an opponent of his on Sunday, I'm excited to be facing him without much of a Cardinals' offensive line. With the amount of interceptions he threw last year, against this Seahawks' secondary, it's quite possible that you could see multiple interceptions, if not multiple defensive touchdowns.

The thing about Skelton that helped him in fourth quarters last year was that he's willing to make tight throws to his playmakers. He's willing to pull the trigger. This is important, and why he was able to help the Cardinals mount some comebacks last year. It earns him glory at times, but it gets him in trouble at others.

If Skelton is a fourth quarter extraordinaire, then what does that make Peterson? Because, he won a few games himself with jaw-dropping returns. Stephens-Howling wasn't bad either in the crunch time. Larry Fitzgerald is pretty good, it turns out.