Seahawks bring in DT/DE Tony McDaniel for a visit

Share All sharing options for: Seahawks bring in DT/DE Tony McDaniel for a visit

The Seahawks are bringing in free agent DT/DE Tony McDaniel for a visit to the VMAC today, reports Ian Rapoport. McDaniel, 28, is a 6'7, 305 pound defensive lineman formerly out of Tennesee that has spent time with the Jaguars and Dolphins. He's got both the length and size that we know the Seahawks like on their defensive line and if signed, would likely be a bit of a bet-hedger in case Alan Branch doesn't re-sign and/or in case the Draft doesn't produce a big defensive tackle.

McDaniel is a tough, versatile lineman that can play either on the inside or at 5-technique on the outside, and provided his knee checks out -- he's had several knee injuries over the years - could provide some veteran depth along the Seahawks' defensive line. I've heard good things about him thus far - BigCatCountry's Alfie Crow was a big fan of McDaniel while he was with the Jags and notes that the big lineman was traded to the Dolphins for a 7th round pick at the time of a regime change because of an arrest, for which he served a one-game suspension. Before he left Jacksonville though, as Alfie noted, he played well against the run, offered a limited amount of pass rush, and outplayed starter John Henderson at times.

ESPN's Mike Sando has a great table that shows a side-by-side comparison of Alan Branch vs. McDaniel HERE, and it's interesting to see how efficient McDaniel has been over the past few seasons while seeing far fewer snaps than Branch has played. 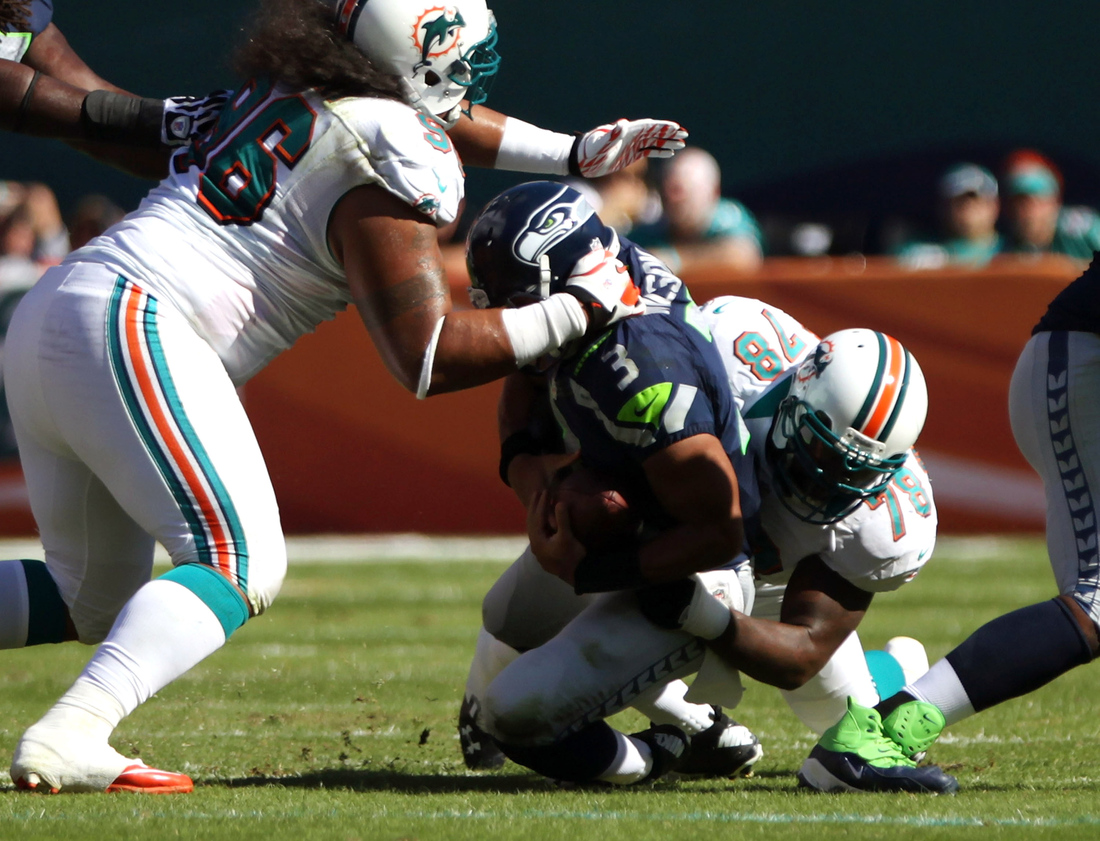 For what it's worth, South Florida Sun-Sentinel columnist Omar Kelly is high on McDaniel, noting on twitter that "Seahawk fans should know they'll be getting a GREAT DE/DT if Tony McDaniel signs. He's tough & has position flexibility." In any case, if McDaniel is signed to a contract, it'd be a reasonable-upside, no-risk type of move and I'd be in favor it it.

Oh, and as you can see above, he sacked Russell Wilson last season when the Seahawks went to Miami. Maybe that left an impression.