The Seahawks & the pro-style I-formation

Share All sharing options for: The Seahawks & the pro-style I-formation

With the advent of the read-option and pistol looks into the Seahawks' offense over the past few weeks, it's only natural that fans and media will take interest in the new stuff and probably overhype it a little bit. With the read-option, particularly for the Seahawks, I don' think the hype is meritless though, because it actually does seem to be working a lot better than their base 'pro-style' run game at the moment.

The Hawks are getting a little more multiple in their read-option looks, mixing up formations (use of split-back formations in shotgun, which I'll talk about later this week), and varying Zach Miller's role in blocking. On some looks, Miller will chip back across the formation to block the backside end. On other looks, he'll get out in front, downfield, and set up blocks for Wilson or Lynch, should Russell decide to keep it or hand off to Lynch. Moreover, the Hawks are still using the 'lead-draw' type looks by pulling either Breno Giacomini or Russell Okung inside and downfield to lead block for Lynch on read-option handoffs. It's really interesting stuff, frankly, and that's why it's so widely talked about.

Nonetheless, as for the 'boring old' I-formation, quarterback under center, smashmouth style of football, the Seahawks are indeed sticking with it as their run-game foundation, and for good reason. It's called 'play-action'.

I still don't really think it'd be wise to use the read-option as your base run game and I don't think the Hawks do either; Pete's an old-school guy, Cable's an old-school guy, and Darrell Bevell played quarterback at Wisconsin, for crying out loud, so I would assume this Hawks team will stay dedicated to the old I-formation looks even when they're not picking up explosive plays regularly, as we're now seeing with the read-zone stuff. As I said above, it's about establishing your commitment to running and using the I-formation stuff to take their shots with play-action off of them. Pete Carroll has said it himself, and I'm paraphrasing -- even a foundational run from that look, that doesn't pick up any yardage, serves a purpose in facilitating their play-pass game.

I'm not sure if you've noticed or not, but after the outrageous blowouts against Arizona and Buffalo, in which the read-option was very prevalent, the Seahawks seem to be really getting back to their roots more frequently. Against San Francisco, according to my rudimentary charting, Seattle came out of the huddle 13 times in their I-formation looks (meaning, Michael Robinson and Marshawn Lynch in the backfield, Russell Wilson under center), rushing it 10 times for 39 yards and throwing three times, all incomplete. Those 10 rushes from straight I-formation looks constitute about one-fourth of the Seahawks total runs (39), and don't include single back looks, shot-gun draws, etc. So, the 29 'other runs' aren't just read-zone stuff.

Now, I joked above about the 'boring-old' I-formation stuff, but there's actually some pretty interesting things that go into these plays, schematically. You may remember seeing Marshawn Lynch and Michael Robinson on NFL Turning Point a couple of weeks back. In that feature, they sat in and broke down game film, mostly from Seattle's win over Minnesota, and they talked about the Power-I run game in particular.

A few things that I had never noticed became so awesomely apparent by watching that video. First, Michael Robinson sets up in a two-point stance prior to the snap, which is a departure from the normal 3-point stance you'll see fullbacks in as they look to explode into their downhill blocks. Robinson prefers this style, and has been instructed by Seahawks' running back coaches to do this, because it better allows him to surveil the defense, both their pre-snap movement and their quick reactions at the snap. One thing that I have noticed in going to training camp and watching games is that Robinson is actually a pretty tall dude - he's listed at 6'1 and that's moderately tall for a fullback. When you think about the vision issues that guys like Ray Rice or Doug Martin might have behind the line, those extra four or five inches is pretty significant.

Robinson uses his two-point stance and height advantage as a way to note alignments, splits, movement and all that pre-and-post snap stuff to best recognize where he should lay out his lead block. To "see the defense like the runner sees the defense." It also surely helps a ton that Robinson played quarterback at Penn State. He's been schooled in recognizing defenses and knowing where their weaknesses should lie, schematically. I really can't stress how important this is -- it's the 'football IQ' part of the game.

Interestingly, in that video, Marshawn repeatedly refers to Robinson as 'his eyes' throughout the video, noting that he trusts Mike Rob to help lead him to daylight. As Robinson puts it - "you read it like a runner - that's why he calls me his 'eyes', because we're supposed to see the same thing."

Another point of emphasis for the Seahawks, and something that I never noticed either, is that on the snap, Robinson and Lynch's footwork ("feetwork" as per Lynch) should be perfectly in unison -- 'like they're on a string,' as Robinson notes. They both point out that they work on this a lot in practice. It's funny, because you tend to think of Lynch as 'brutish' or undisciplined because of his wild, haphazard running style, but the fact that he works diligently on his footwork is pretty fascinating.

I saw a perfect example of both of these points during the 49ers game, so I wanted to break it down. Here's what it looked like, and the two things to note are 1), obviously, their mirrored footwork - even seven or eight steps into the run, and 2) how Lynch uses Robinson to lead him to daylight, in a professional version of 'ghosting'.

To slow it down, this is a typical zone-run for the Seahawks. Zach Miller will pull across the formation to take out the backside defensive end/outside linebacker, and the rest of the line will move left laterally at the snap. This line movement is absolutely typical of a Zone-Blocking scheme. 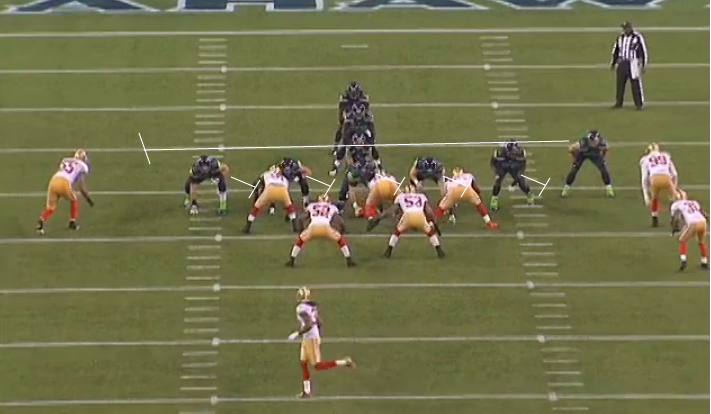 You can see that Breno moves left with the rest of the line and leaves the backside DE/OLB unblocked. Miller, moving across the line against the grain, will pick him up and set the edge. San Francisco does a good job of jumbling up things in the play's direction -- left -- and you can see Robinson and Lynch looking for a crease.

Behind the line, Navarro Bowman and Patrick Willis, flanked by Donte Whitner, are lurking. 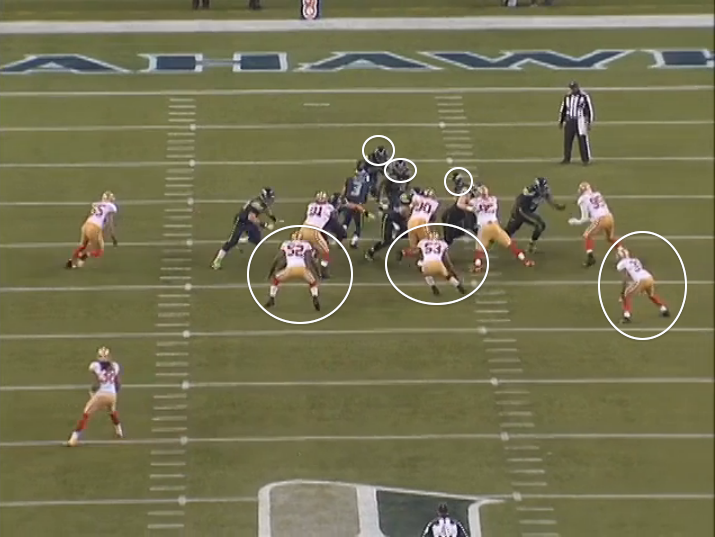 When the zone-left lateral movement doesn't immediately open up any quick lanes or creases, it's improvisation time, and Michael Robinson quickly notices that San Francisco has overextended to the playside. This is called a cut-back lane.

Robinson veers to his right, and Lynch 'ghosts' him closely. Just Wills is left unblocked in the path of the run now, so Mike Rob lays a hat on him. 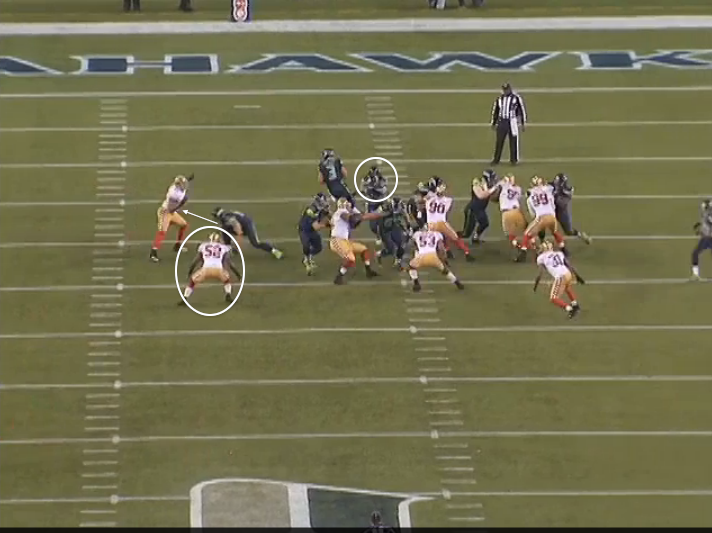 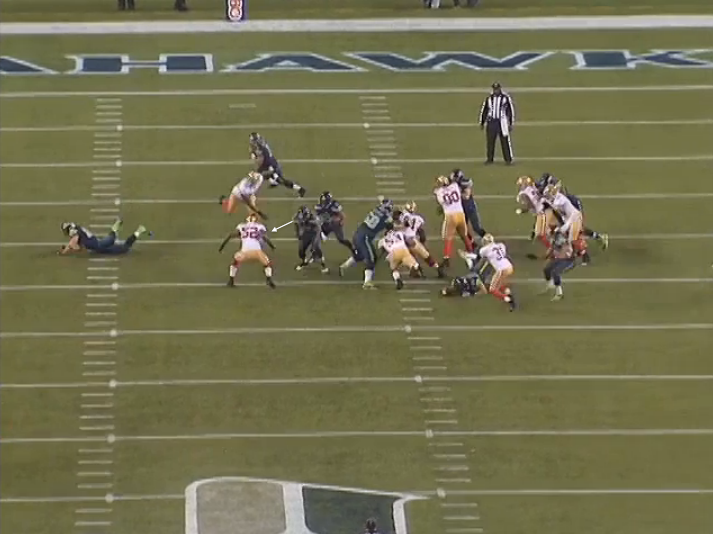 Lynch has underrated lateral agility and explosiveness - one of the main reasons he's been so damn good in the read-zone stuff. He strafes left to avoid Robinson and Willis, and gets past Whitner with a second strafe move. 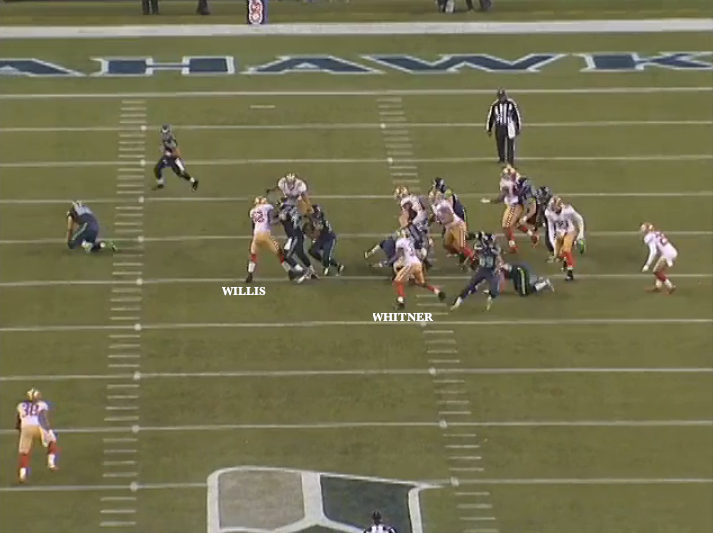 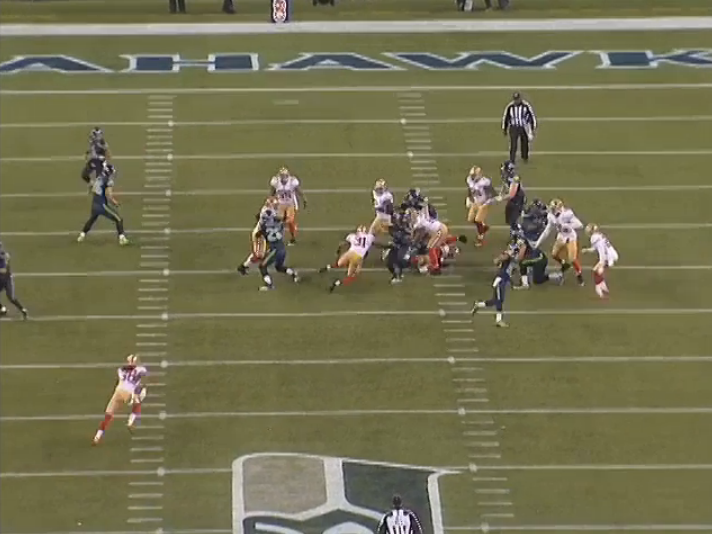 The play picks up 9 yards and a Seahawks' first down.

Against St. Louis, Seattle ran a similar looking play but a crease to the left did in fact open up, allowing Lynch to flow through in the line in the play-side direction.

In this look, Zach Miller is in-line to the offensive right, and will not be moving across the formation. As with almost every zone run, the 'covered' linemen -- AKA the linemen with a defender in front of them, will move laterally on the snap; the 'uncovered' linemen will briefly help their teammate to the left or right and then quickly move downfield to pick up linebackers or safeties. In this case, RG J.R. Sweezy and LG Paul McQuistan are 'uncovered'. 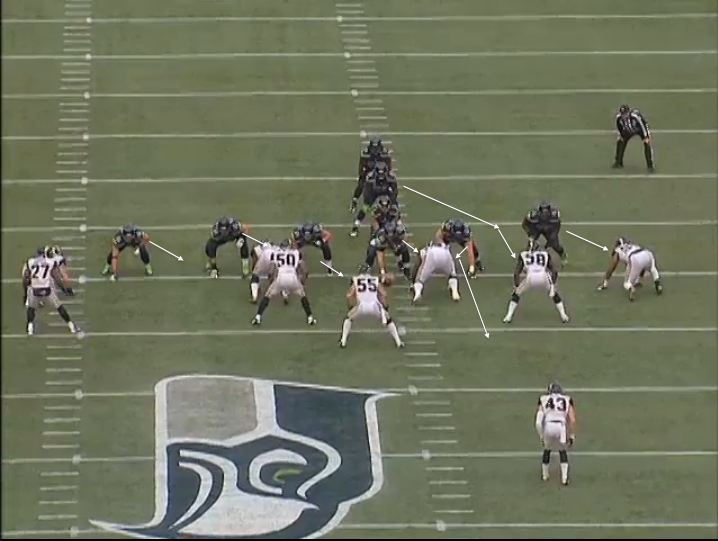 At the snap - Lynch and Robinson are in perfect lockstep. Sweezy moves laterally then downfield, turning back to find a backside defender to neutralize. McQuistan essentially chips in an effort to allow Max Unger some leverage, and then moves into the second level. The speed at which all this happens is really pretty crazy. 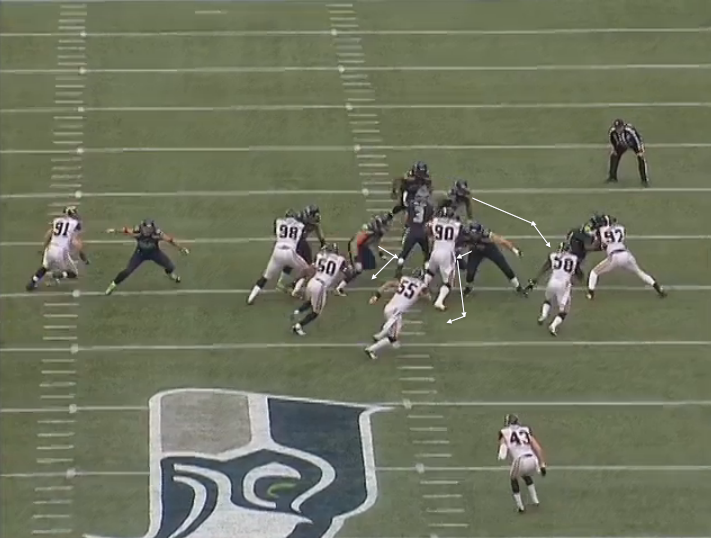 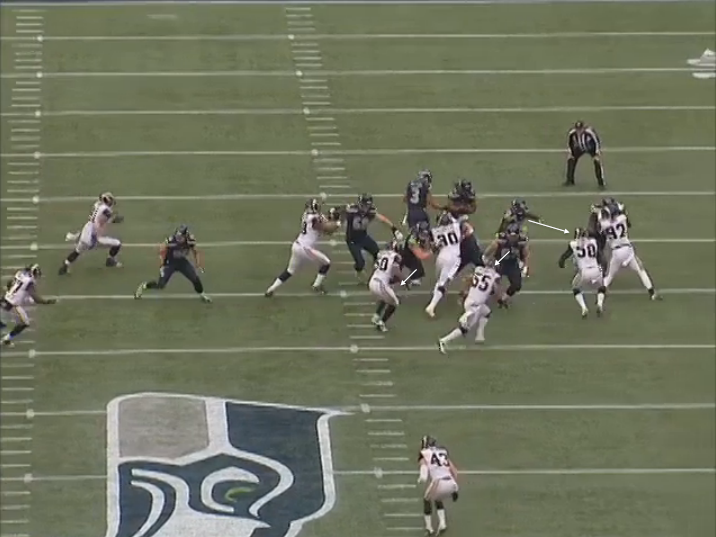 Lynch hits the gas pedal and bursts through the line. Anytime you can get past the defensive line, that's a successful run. 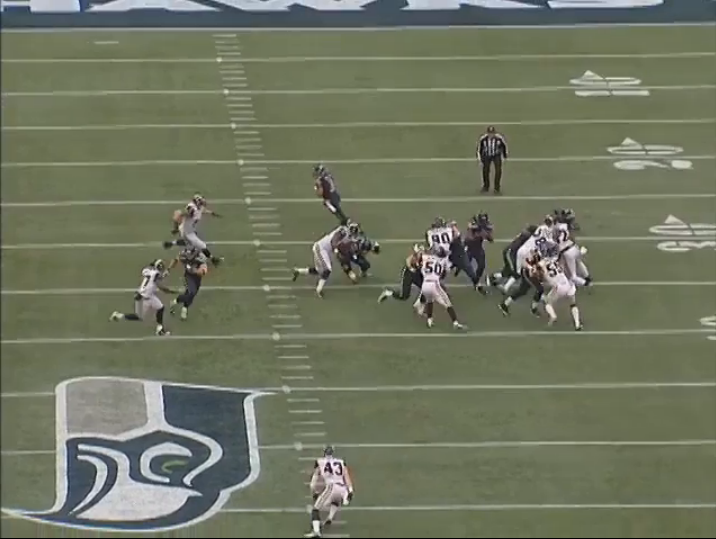 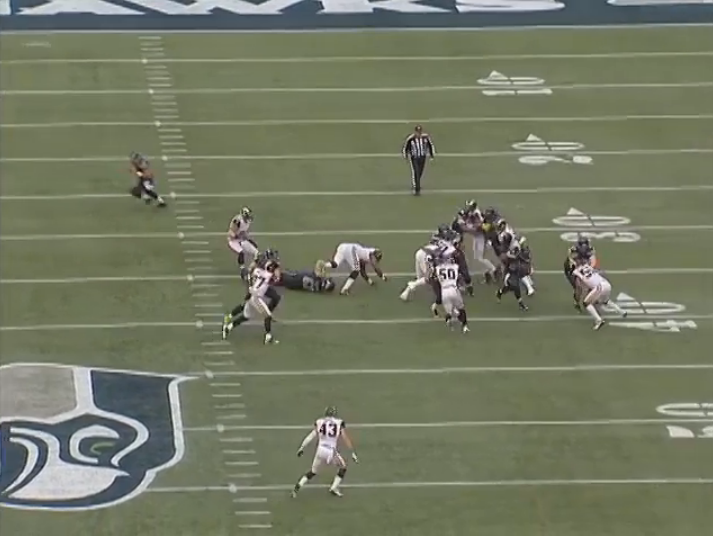 That's as far as Lynch gets before getting slowed up, but in typical Beastmode fashion, he picks up 11 yards.

Big thanks, as usual, to BigTrain21 for the gifs!