Russell Wilson running between the tackles: Another look at the scrape exchange

Share All sharing options for: Russell Wilson running between the tackles: Another look at the scrape exchange

At the risk of beating the read-option coverage to death, I just wanted to add a quick note about the Seahawks' use of it against Washington this afternoon because on a number of occasions, we saw Russell Wilson keep the football and instead of running to the outside, he ran right up the gut behind what looked like a lead-blocking Marshawn Lynch.

After the game, I think it was on Brock and Salk, Pete was asked about this little wrinkle or whatever it was that got Russell Wilson 19 yards on the first try, and I believe over ten yards the second time it happened. Pete just laughed and said "yeah, well, Russell should've handed it off to Marshawn on those."

So, in case you missed it, I wanted to briefly explain what was going on with these plays. I should note, that when Wilson rattled off this 19-yard run right up the gut, Seattle had not yet chosen to utilize the read-option and I was getting ants in my pants about it. I don't know if the read-option stuff should be featured HEAVILY in anyone's gameplan long-term, but I am of the opinion right now that if it's working so goddamn well, why not use it until teams can prove they can stop it? I was bitching on twitter about it right before this play happened.

The first play of the 2nd quarter. Seattle had gained 9 total yards on 7 snaps and trailed by 14 points. It's of my opinion that this play was a catalyst of sorts - a small one, but meaningful nonetheless - to break Washington's ridiculous momentum advantage and to take the crowd out of the game ever so slightly.

To set up the play though, let me quote Jacob Stevens and his excellent post on defending the zone read option, on the concept of the 'scrape exchange'.

"The classic way to defend the zone read option has been the scrape exchange. The defensive end always crashes down the line on the run. Inside zone, outside zone, doesn't matter. That typically forces the QB to keep the ball and take the counter. So the backside linebacker "scrapes over" to cover the ground the end vacates, to stop the QB."

This scrape exchange concept is exactly how Washington countered the Seahawks' first read-option look, and frankly, they confused Russell Wilson.

Below, you see the assignments. Zach Miller will release downfield like he's running a route, then block the oncoming nickelback/safety to his side (thinking that Russell will likely be coming over to that side if he doesn't hand off to Lynch). The Seahawks are in a three-WR set, so two DBs are to the left of the screen, out of the picture. One is playing press on the slot receiver, Doug Baldwin, and the other is in off-coverage.

For the 'Skins, you'll see the DE crash hard toward Lynch automatically, and behind him, the strong-side middle linebacker will 'scrape' over and take his place, ideally tackling Wilson after he's kept the ball while reading the crashing DE. 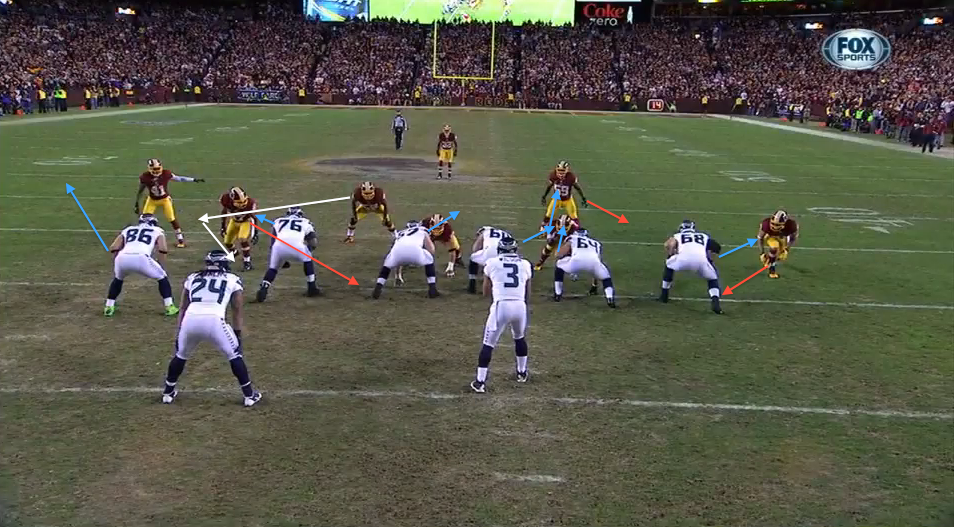 The ball is snapped. Wilson sees the DE crashing inside, looking to collapse the running lane for Lynch. McQuistan, Unger, Sweezy, and Breno do a great job in opening up a gaping hole right in the middle of the field as Russell Okung seals the DE crashing in.

One of the ways to combat the scrape exchange is to engage a normally unblocked defensive end - this keeps him from collapsing the hole that Lynch theoretically would run through, and I think this is why the backside middle linebacker creeps toward the outside right at the snap, not counting on having to clog up that gap.

Jacob's post pointed to an interesting conversation between Pete Carroll and Marshawn Lynch from when Carroll was mic'd up for SoundFX:

"If we run Stag again, I'm trying to get the tackle to bump out on the end; the linebacker's scraping for the quarterback, the hole's going to be freaking enormous, OK?"

This is exactly what happened. And yes. The hole was freakin' enormous.

Wilson, though, sees the DE 'crash', and he keeps the ball (the wrong decision, obviously, when you see the 'freaking enormous hole'). Note, the moment that executes 'his read', the 'scraping' LB is obscured behind Okung and the DE. It's either a missed read by Wilson or a brain fart on not handing it off ... I'm not sure, because normally Okung would be crashing right, leaving that DE unblocked. 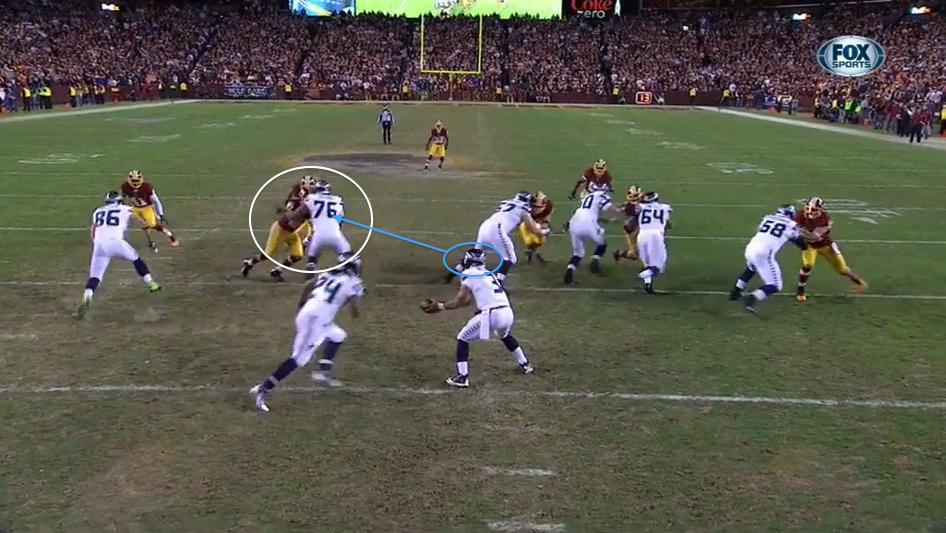 As Wilson keeps it and looks to bounce outside, he now sees that the LB has him bottled up. 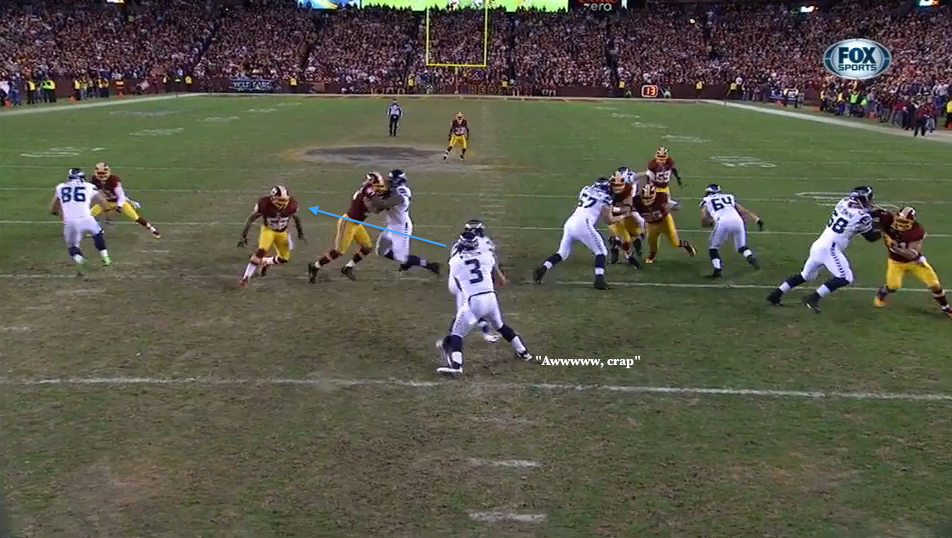 Wilson scrambles and finds that the middle of the field is now wide open, due to some great blocking upfront and a curious decision by the backside MLB. 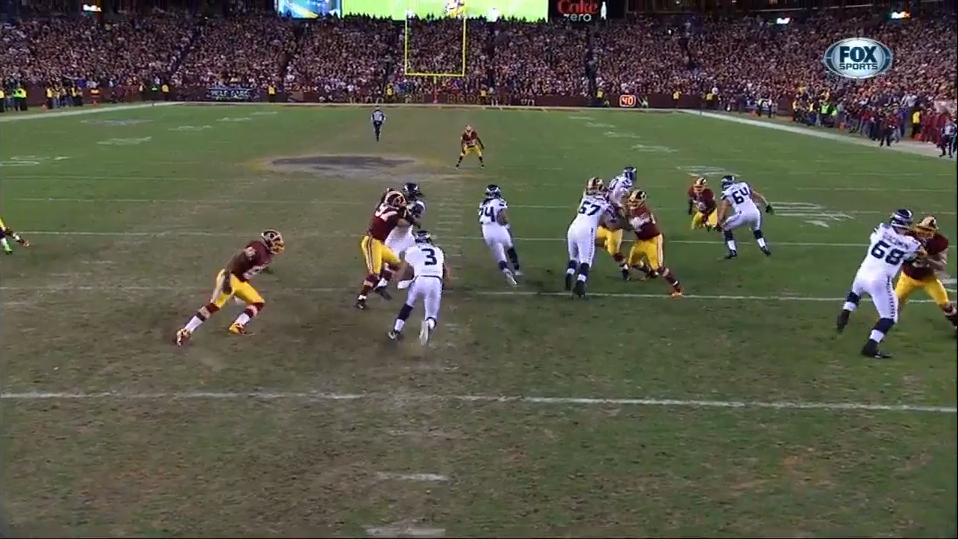 Wilson runs for 19 yards and the Seahawks' first explosive play. Lemonade, I guess? 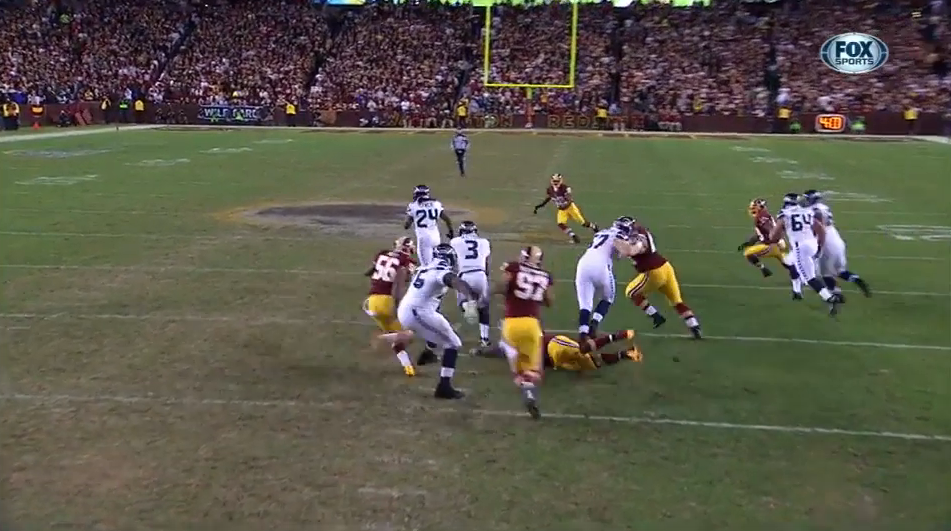