Lookin' pretty good right now. But what's that on the horizon?

So here's the thing. Russell Wilson started the season a community-rending rookie, rapidly maturing into an impressive, promising but not great player, seeming to definitively establish his arrival with late clutch play at Chicago, and then took the team on an incredible run of three games against foes flummoxing and formidable, before settling in with a couple of games that didn't particularly impress.

The level of dominance Seattle produced in that three-game stretch was obviously unsustainable, and so not only was any upcoming letdown of performance anticipated, games like these last two against St. Louis and Washington are more than understandable, particularly so long as the team keeps winning, and of course so long as the letdown isn't too big.

We also have a few substantial football reasons at hand why Seattle was not going to continue decimate these specific opponents: St. Louis has a fair shake of really good talent on defense, with pass rushers Chris Long and Robert Quinn, linebacker James Laurinaitis, and cornerbacks Cortland Finnegan and Janoris Jenkins. Their smart coaching staff is known for having a plurality of pressure packages using base, nickel and dime personnel. Washington, too, are capable and more than willing to manufacture pressure from unconventional sets.

Wilson and the passing game produced just 5.6 EPA in the playoff game against Washington.

The Arizona blowout produced less, because it didn't need to. Aside from that, four games produced negative EPA, and the Green Bay game produced less than the Redskins game. These were all low-scoring games, with 16 points the highest yield for the Seahawks out of any of them, those points coming in substantial part from the defense, directly or indirectly.

Seattle scored 24 points against Washington and I'm not writing this to say we should be worried because the passing game produced a low meaningful EPA for the first time in over two months.

We shouldn't be worried about the 5.6 EPA at Washington, because Wilson has achieved demonstrable consistency, in individual performance and in how his play affects overall team performance, as the chart shows. His quality of play has been impressive. The rest of the team is playing well for the most part. They're good enough to beat anyone else remaining in the tournament in either conference, at any venue. Whether they will win even one more game is outside the scope of this article. I'm not concerned in that way. Not exactly.

Seattle's passing game just didn't have a very good day against Washington. Zach Miller and Sidney Rice bailed them out a couple times. Oh sure, they were harried and frustrated by Jim Haslett's aggressive pressuring and never fully anticipated or adjusted for the DB blitzes. We can chalk that up to assignment breakdowns for a very young team, acknowledging Wilson did a poor job of making line calls off of presnap reads -- because a couple of those DB blitzes were pretty easy to spot -- and concede that that hampered the pass offense a bit in a close game that was decided by Robert Griffin's injury, Kyle Shanahan's abandonment of effective rushing by Alfred Morris, and some good running by Marshawn Lynch.

If we just leave it at that, that makes for a pretty positive outlook, no worrisome implications on Seattle's passing game, much less on Wilson's promising career. And none of that is inaccurate. It's just incomplete.

He's still thrown the fewest passes of any 16-game starter. They've had a couple of blowouts, and that's probably played into that. I think you have to be careful with Russell Wilson. They're walking a very fine line the last few weeks -- he's been running around a lot more than he did earlier in the season. He's left some plays on the field.

He missed a touchdown last week -- he ran around and threw it to Marshawn Lynch, and everybody went, 'Oooh, wow -- look at Russell Wilson!' But, the design of the play was Zach Miller down the seam, he was wide open, and there was no pressure on Wilson. He missed it -- he didn't throw it.

The more quarterbacks run, the more that mentality takes hold. You've got to be really careful with that stuff, and it's easy to be hypnotized by all that. The transition they've undergone in their offense -- when you increase the percentage of Pistol and option plays in your offense, the run game becomes more focused on your quarterback. The defense has to react to that.

I wondered why this concerned Cosell, and I still didn't fully understand after the Redskins game. I more or less get the notion of a QB deciding to run too much having an adverse effect on their mental focus for passing. It's the kind of thing that I wonder about how true it is. It's perfectly logical, but is it in any way falsifiable? I get there are plenty of "running QBs" and fewer "QBs who run," and the abilities that separate them are mental and intangible along with the measurable. It's not the kind of thing Cosell subscribes to much.

And even allowing that it's a real thing and that Cosell takes stock in it, Wilson's composure and rapid information processing and actinguponness have been standout traits that is key to why so many of us have been insufferable to the likes of the delightfully-grouchy Hazbro and the less-pleasantly-grouchy-but-thoroughly-underappreciated Steen.

It just wouldn't seem to be a realistic concern by this point.

Yet in both these games, the Rams and Redskins matchups, Wilson reacted poorly to the pressure. It wasn't imagined pressure; all QBs play worse when pressured, but the only way a QB can be successful is by beating the pressure himself. So regardless of how quality the protection has been -- and let's not forget part of that squarely belongs on his shoulders -- he didn't handle it well, the past two weeks.

He had before. In impressive fashion. So I found myself wondering what kind of correlation running more, or running by way of the read-option, might have on focus or composure, when it comes to throwing the football. I found myself agreeing with Cosell, and highly respect his wisdom, so felt inclined to just kind of take his word for it. A guy known for keeping his eyes downfield and running to throw is missing guys downfield. 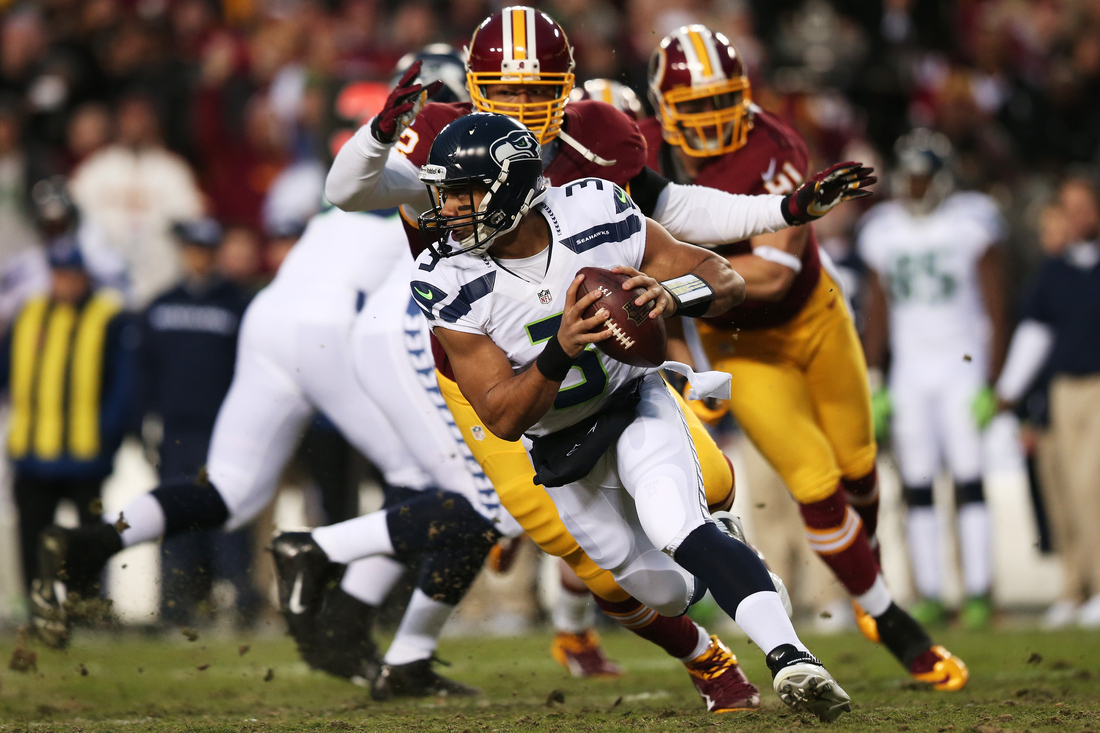 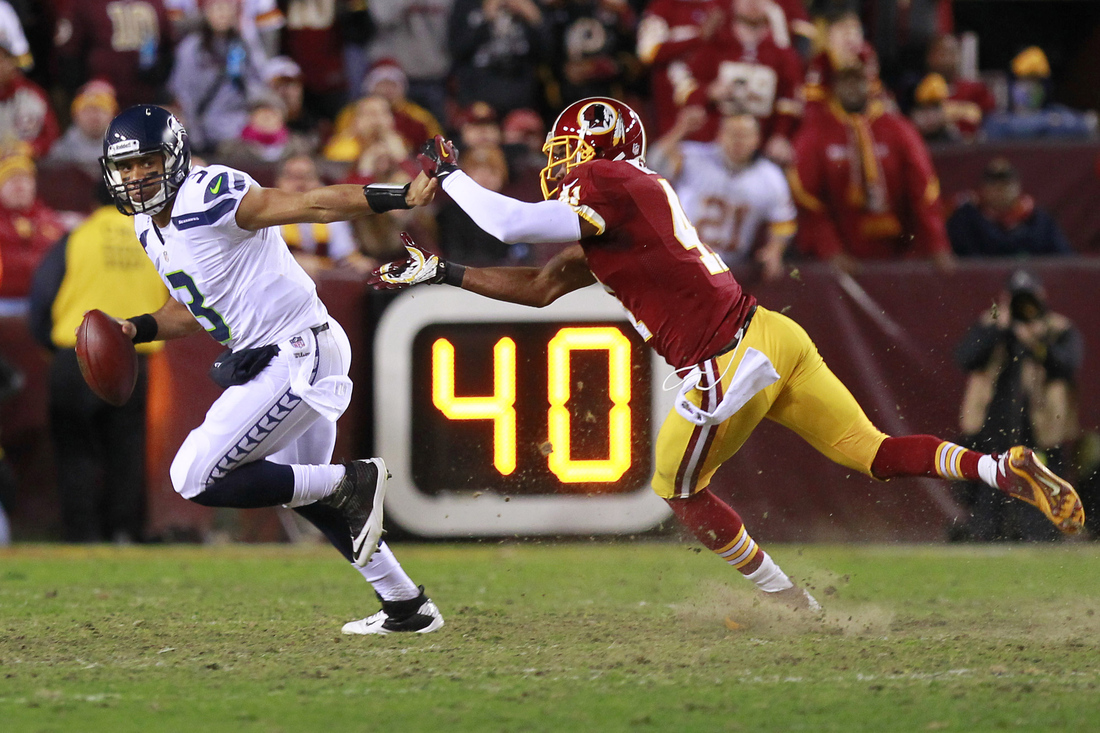 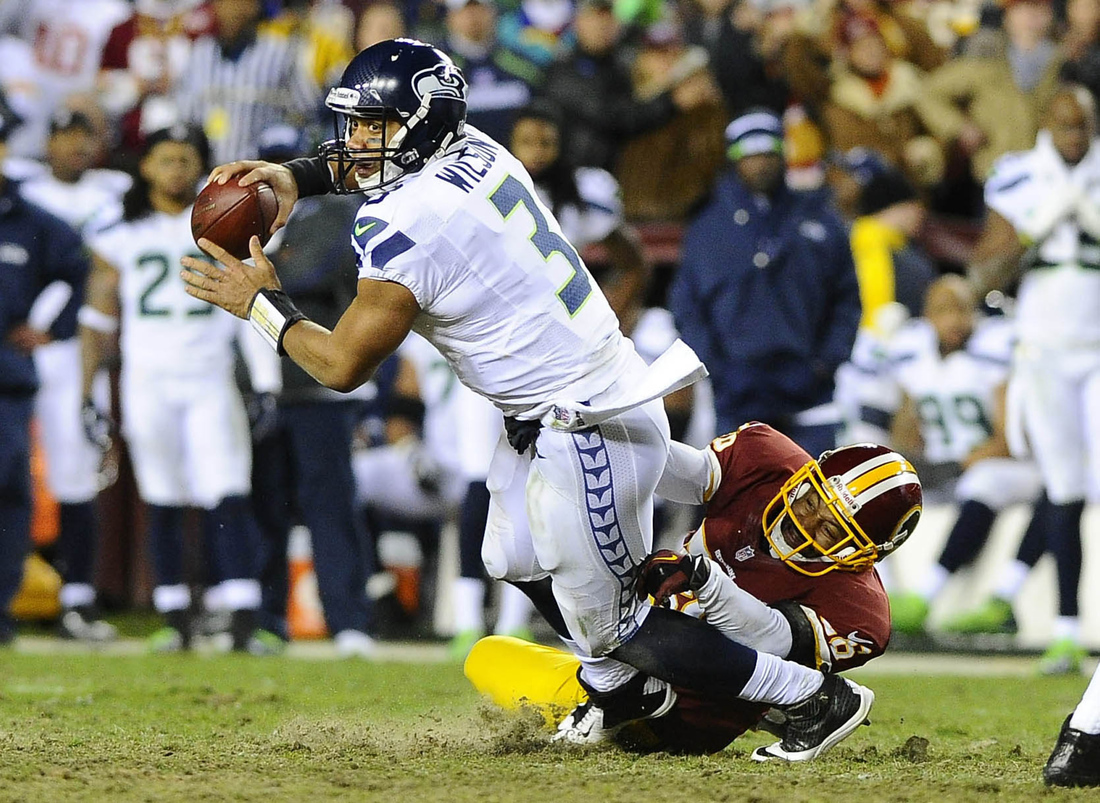 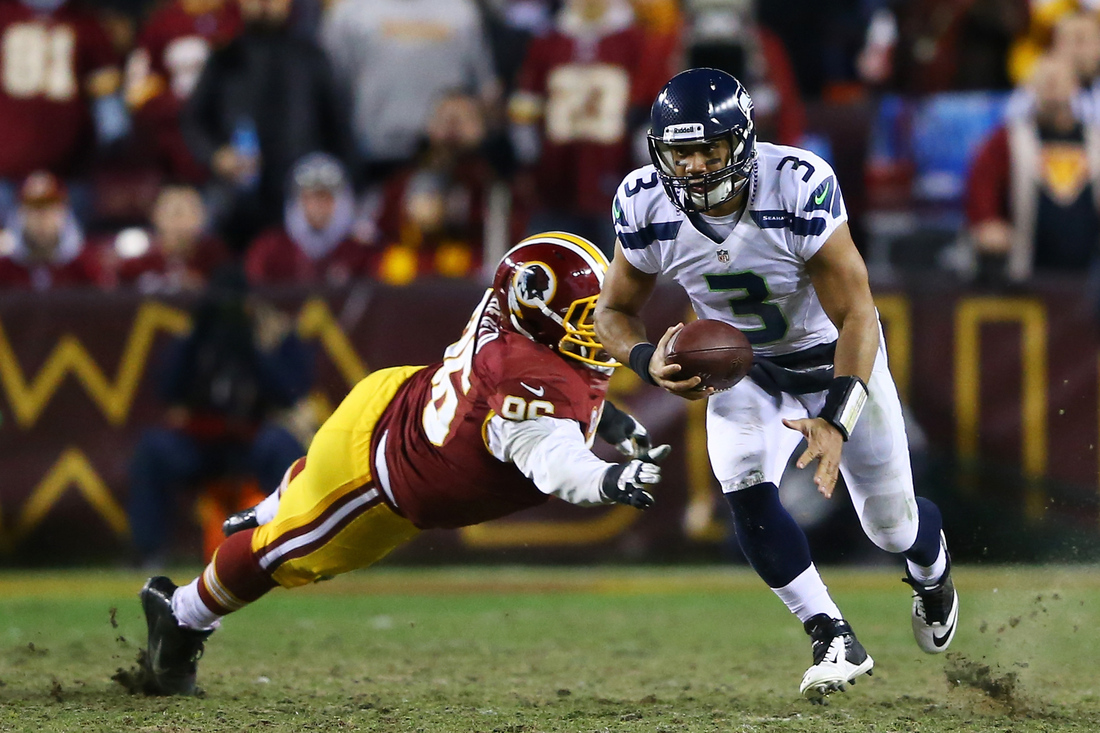 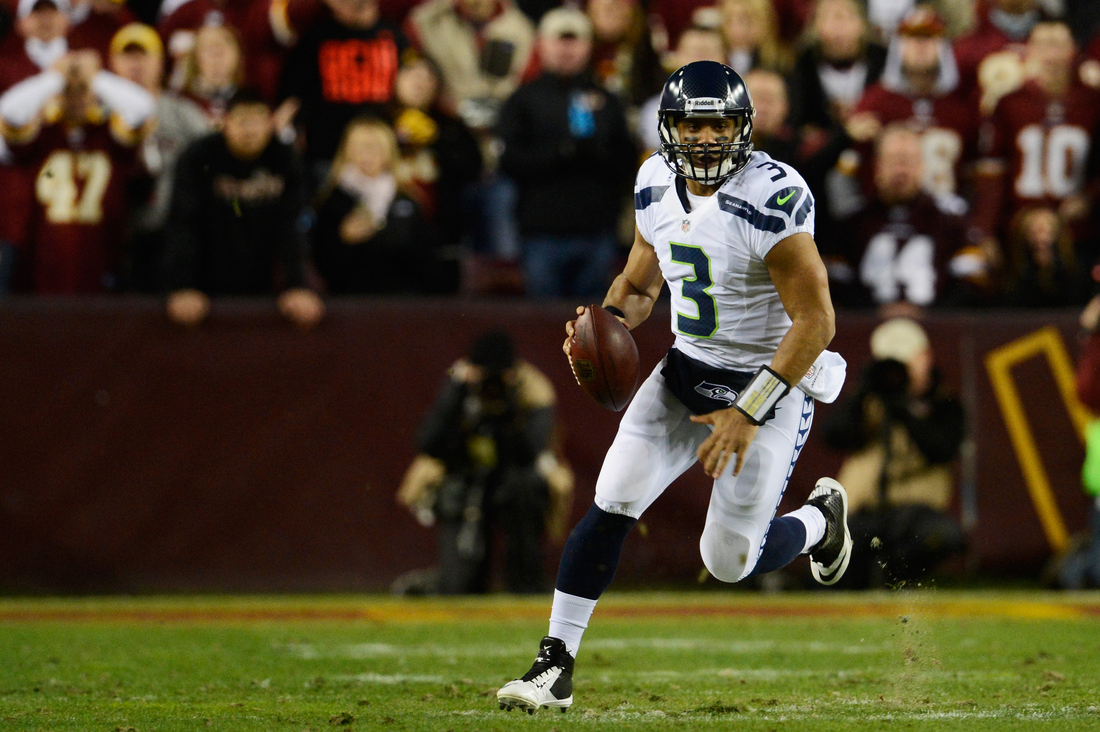 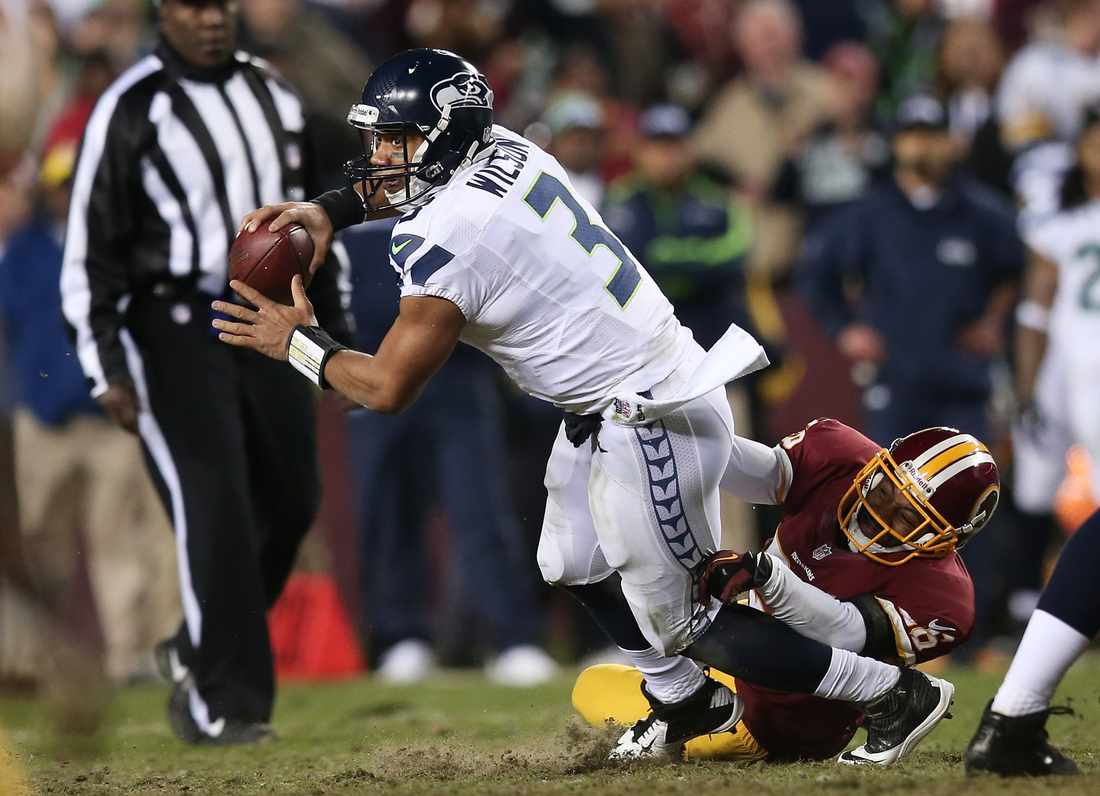 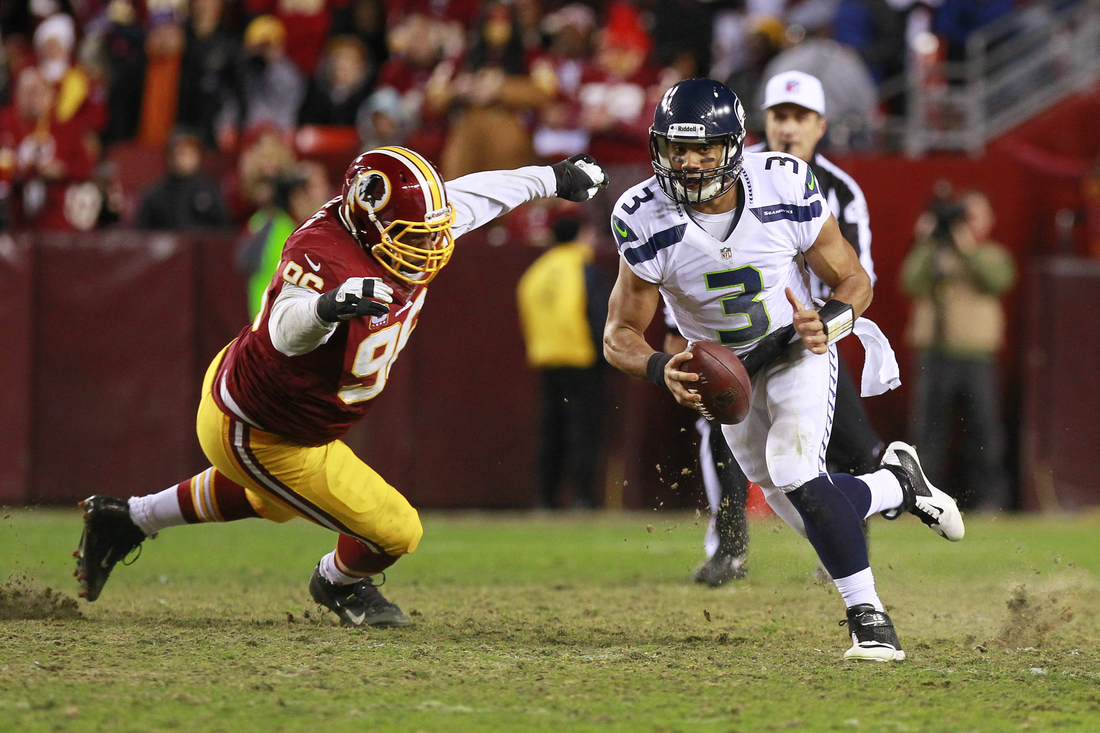 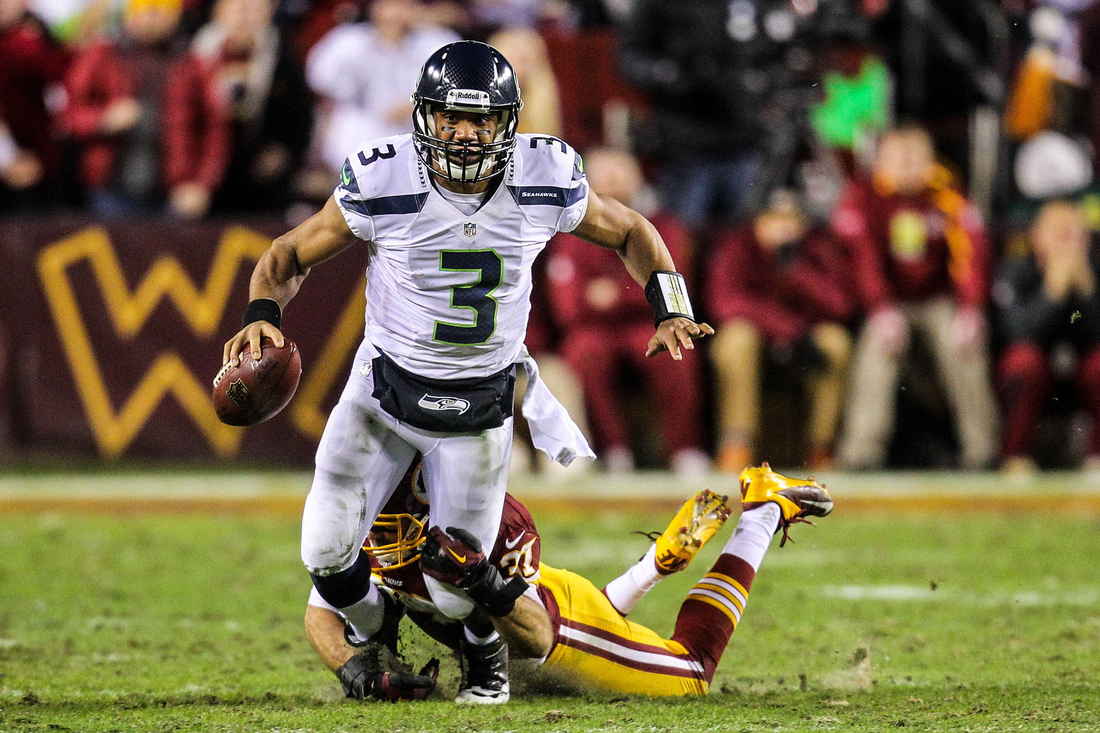 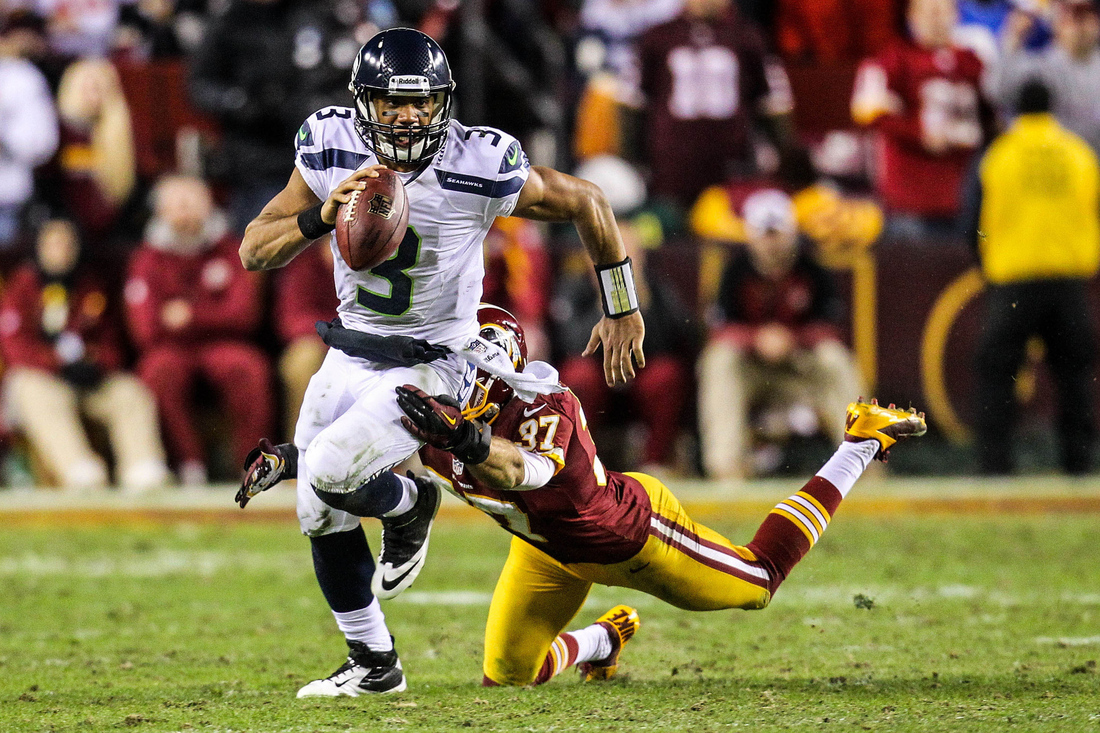 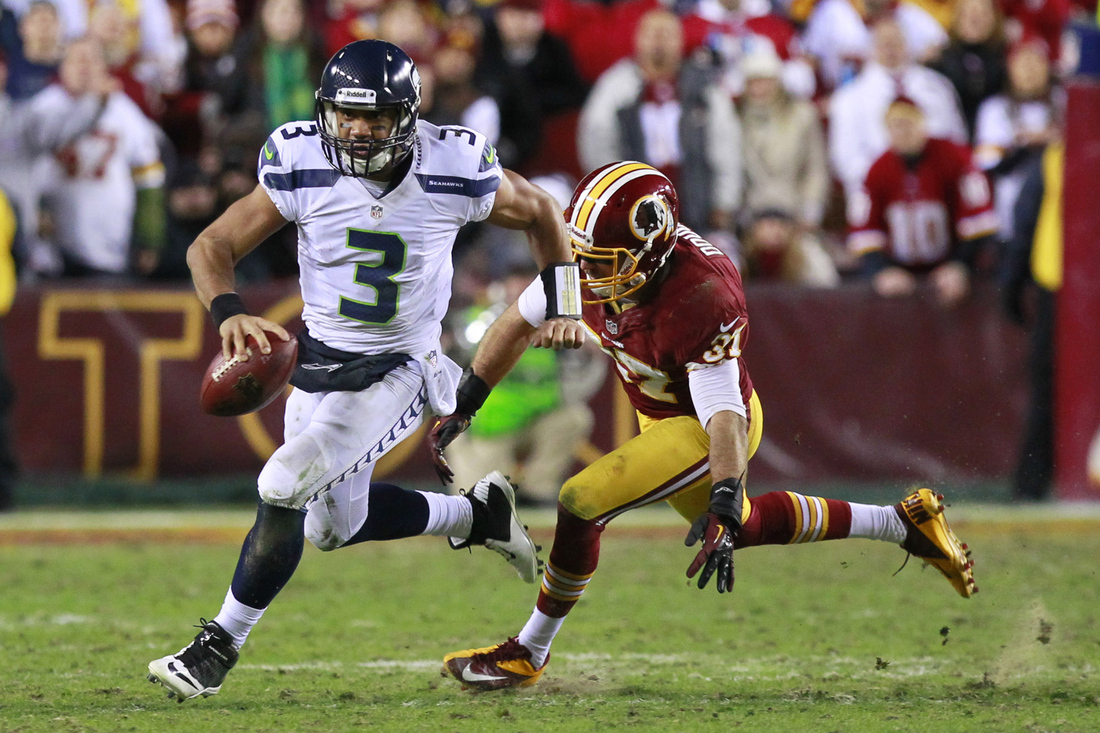 Yes, he was harrassed. Yes, he didn't handle the pressure well -- he has good ability to extend a play when protection breaks down, but he gave up too early on stepping into the pressure to make a throw, too many times.

Today, Griffin underwent knee surgery. The longevity of the read-option in the NFL remains unclear. I've predicted it will remain in some form, due to the strong effect it has in play action. Cosell warns of the consequences of going to this particular well too often. And I'm wondering if this could possibly be a harbinger for at least the upcoming stages of a career that's started out so incredibly promising.

And then it just hit me. Epiphany.

You read with your eyes.

The read option makes the read with the QB's eyes. He reads a defensive lineman and decides what to do. Yeah, the play-action potency is real. But to capitalize on that pull the read-option has on the linebackers and moneybacks, the QB then has to read the coverage.

Wilson isn't keeping his eyes downfield. On RO-PA, he's bringing them up.

He can know the play, know the routes, know where to look and what to read, but that last word requires eyes downfield, and from snap to handoff-fake, more things change more, downfield, than what a read defender does under the Magnum Gaze of the unflappable, Hawk-going, heavy-lidded........dangerusssssss.....Levi's.............

Wait. Where was I?

Oh yes. Stormcloud. Looks like it's passed, actually. Nothing but blue skies. Look all around.

Well, not quite just yet; that Jimmy Cliff song is bound to come soon, but we're still somewhere toward the end of that other Jimmy Cliff song, "Many Rivers to Cross." The part where he survives because of his will.

Wilson's crossed plenty. This epiphany about the difficulty on QB progressions the read-option has says more about play design than Wilson's ability. But on the other hand, such substantial success has come off the read-option, that we still need to come to a bit of an understanding. Wilson's progressed incredibly well as a football player, and as a quarterback, and as a running threat. He's also a good and smart passer.

The effective Shanahan offense built for a play-making athlete who's terrific as a passer but not ready to command a pro-style complex offense has paid big dividends for Seattle, but it's overshadowed Wilson's progress as a passer a little. Wilson's progress has been positive, and steady. He deserves Rookie of the Year consideration.

And yet even as he plays a prime role in producing the big blowout games and the six-game winning streak, he's done so only in moderate part as a passer. I think the read-option contributed to his problems in handling pressure, because his progressions start later than they would with traditional play-action, and a dozen different moving pieces have moved since he first dropped his eyes. So I'm actually less worried about that, now.

But the success and the quality of play significantly mask his real progress as a passer, which is substantial and quite positive, but less than great. Less than stellar. I suppose this shift of perspective only matters to fans and fan discussions and nerds who care about having an accurate perspective, so that's why I'm posting it to Field Gulls. So we can temper expectations and be prepared for Wilson to play well but face difficulty through the remainder of the playoffs. Only good pass defenses remain. Unless he faces New England, and you know where that would be.

Next to a river. Ready to be crossed.